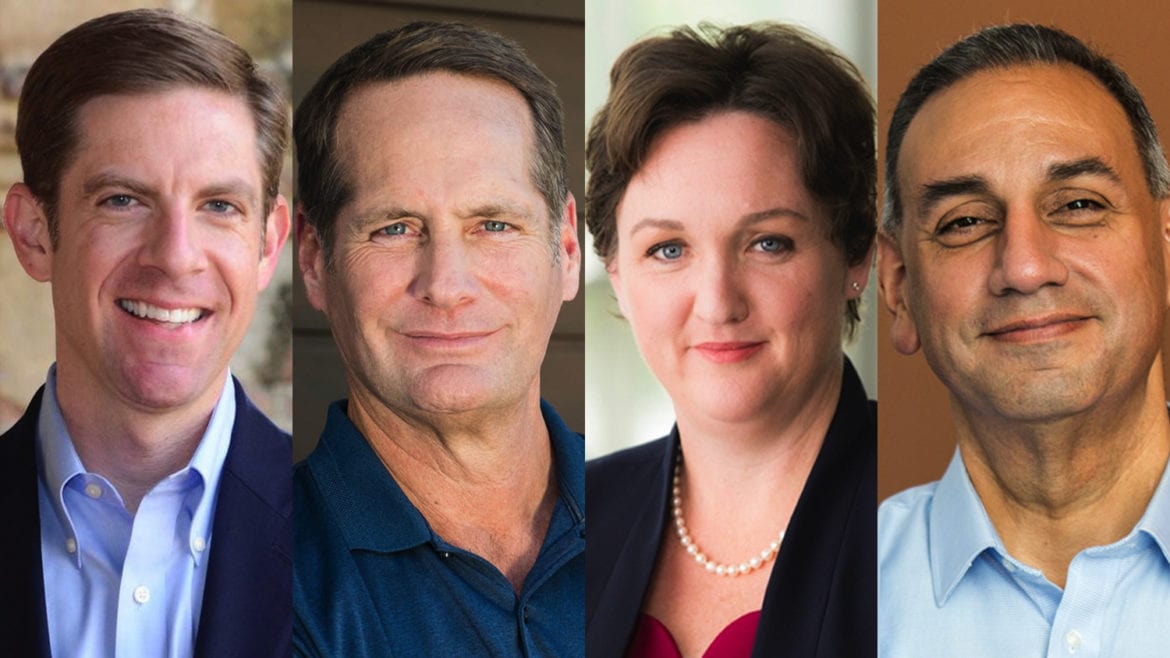 Democrat Gil Cisneros, who was behind in the first week of vote counting for the 39th District, took the lead Thursday, and expanded his lead Friday, from 941 votes to 3,020 votes, over Republican Young Kim.

“It’s a revolution. I don’t know of any time where there wasn’t any time of some number [of] Republican representation [in the U.S. House of Representatives]” in Orange County’s Congressional delegation, said Fred Smoller, a Chapman University political scientist and California elections expert.

In other Orange County races, the leader for the north county-based 4th District county supervisor race shifted to a Democrat Friday, with days of gains by Doug Chaffee pushing him nine votes ahead of Republican Tim Shaw out of about 129,000 counted so far.

And the results continued to narrow in the 34th State Senate District, where Republican Sen. Janet Nguyen’s lead over Democrat Tom Umberg fell further, from 1.3 percentage points to 0.8 points, since the prior day’s update.

In the 39th Congressional District, Kim had a 5.2 percentage-point lead at the end of election night, but the vote tally later swung in Cisneros’ favor Thursday, when he took a 0.45 percentage point lead. That increased Friday to 1.4 percent, or 3,020 votes.

Cisneros is a U.S. Navy veteran and former shipping manager for the Frito-Lay potato chips company. He won $266 million in the 2010 California Lottery and started a foundation with his wife that funds educational opportunities for students.

National Democrats targeted OC’s 39th, 45th, 48th and 49th Congressional districts after Hillary Clinton led each of the districts — including the countywide vote — against Donald Trump in 2016.

“Trump was the accelerant. He certainly pushed them over the top…I think we turned the corner and now have a competitive party system” in Orange County, Smoller said.

Republicans held 7-point advantage in Orange County voter registration over Democrats in 2012, the first election under the current Congressional district boundaries. Heading into the 2018 general election, Republicans held a 4-point lead over Democrats. During that same time frame, no party preference voters grew from 23 to 26 percentage points.

About 88 percent of Orange County’s total estimated ballots had been counted and reported as of Thursday evening.

About three more rounds of counts the size of Friday’s remain, based on the estimate of outstanding ballots and rate of counting.

Below is a run-down of updated vote counts in some of the county’s key races. Daily 5 p.m. updates are scheduled for each of the next few days, except Sunday. There also will be no updates on Thursday and Friday of next week, due to Thanksgiving.

Cisneros took a narrow lead Thursday of about half of 1 percent, or 941 votes, which on Friday grew to 1.4 points, or 3,020 votes. Updated figures are calculated based on vote counts from Orange, Los Angeles and San Bernardino counties.

Porter took the lead in Tuesday’s update, and her lead grew from 0.2 percentage points that day to 2.4 points on Thursday and 2.8 points Friday. Porter was leading by 8,024 votes Friday.

Rouda’s lead over Rohrabacher increased from 5.8 percentage points to 6.4 points since the prior day’s update. As of Friday’s update, Rouda was ahead by 16,922 votes.

Levin’s wide lead grew further, from 10.8 to 11 points, since the prior day’s update. Updated figures are calculated based on vote counts reported from Orange and San Diego counties. Friday’s update had Levin with a 27,672-vote lead.

Nguyen’s lead dropped from 18 percentage points on election night, to 5.6 points on Saturday, to 0.8 points Friday. She was leading by 1,848 votes Friday. Updated figures are calculated based on vote counts from Orange and Los Angeles counties.

Harper was ahead on election night, but Petrie-Norris pulled ahead Nov. 8 with a 0.4 percentage-point lead, which increased to a 4.0 point lead as of Thursday and 4.6 points on Friday. Petrie-Norris was leading by 8,401 votes after Friday’s count.

Chaffee took the lead Friday by nine votes out of 133,709 votes counted so far, after gaining in the days of counting after Election Day.

Spitzer’s significant lead held at 6.8 points, or 55,469 votes. Rackauckas would need more than 74 percent of the estimated remaining votes in order to win, and the trend so far has been favorable to Spitzer.

This list only shows the top vote-getters. View results for all the candidates on the Orange County Registrar of Voters website.

The measure gained slightly in the latest update, going from a 5.0 percentage point lead to 5.2 points, or 3,828 votes, as of Friday’s updated tally.

Pulido’s lead narrowed slightly, from 2.0 percentage points to 1.8 points, since the prior day’s update. As of Friday, Pulido was ahead by 840 votes.