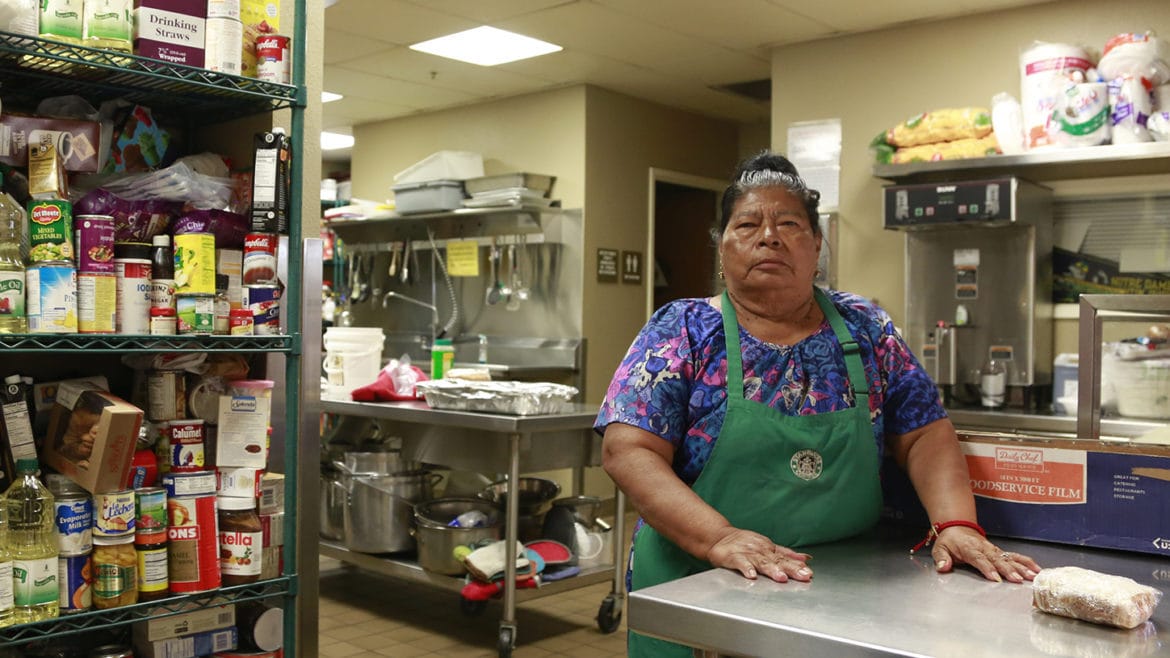 Elsa Alvarado, a 60-year-old Santa Ana resident, has been working as the main chef for 35 years at the Southwest Community Center.

The Buena Park Coordinating Council, one of Buena Park’s longest running and busiest food banks, was forced out of operation Oct. 23 following a change in property ownership that resulted in the termination of the nonprofit’s lease.

What those households will do as Thanksgiving approaches:

“I don’t know,” said Davis in a phone interview. Last year in November, the Coordinating Council served over 3,000 people.

“We tried to get the landlord to let us stay to the end of the year. We had meat coming for Thanksgiving. We had our incoming toy drive,” Davis said. “We no longer have a place for those.”

The Coordinating Council, currently moving its food and supplies to storage, asked the Buena Park City Council for additional funding on top of an over $2,500 annual Community Development Block Grant they receive.

The city opted not to fulfill that request at their Nov. 13 meeting. In a phone interview, Mayor Virginia Vaughn said it would set a wrong precedent for the city’s other organizations funded by the grants and that there are other food banks in the city.

But where the Coordinating Council was open three days a week, many of Buena Park’s other food banks like the Calvary Tabernacle and the Veterans of Foreign Wars Post operate less frequently. Some are open just once a month.

They also aren’t as well-publicized, according to Davis, who said frustrated users of the Coordinating Council have started calling the city for more information on other locations.

The Coordinating Council’s problem isn’t unique in Orange County, home to over 200 food banks, according to Waste Not OC, a public-private coalition that recovers excess food from local businesses and distributes it to food banks countywide.

“We’ve always heard of various churches or food pantries who operate on leased property, and then something happens with their lease and they’re forced to go away,” said Waste Not OC’s executive director Mike Learakos.

The fate of Beach Cities Interfaith Services (BCIS), an organization with a food bank for Huntington Beach’s working poor residents and homeless people, became uncertain in November, 2017, as the City Council considered revoking the group’s permit in light of a city staff report alleging a 92 percent increase in police calls around the area.

The city’s potential early termination of the permit drew staunch opposition from supporters of BCIS, and the Council ended up dropping it from the agenda. But BCIS closed indefinitely on June 29 this year, according to a Facebook post by the group.

“For example, you’ll have a local pantry and they’ll be open for one night a week and then the next thing they know, they’re open one night a month. It varies,” Learakos said. “It’s almost a full-time job keeping track of the changes that food pantries run into.”

Learakos added that such food banks, which are “built on the strength of volunteers,” experience staffing level changes day to day.

“Some days they’ll have a lot of volunteers, the next day they may not have any,” Learakos said.

According to a Buena Park city staff report, there are other available properties around the city that can accommodate the Coordinating Council, but the properties would require a $1,300 increase in the $1,700 the food bank previously paid in monthly rent.

Davis said while the Council wouldn’t grant his food bank the requested funding, some council members contacted him after the meeting to offer donations.

“I don’t care how we get the money, you know? It’s just a matter that money’s tight,” Davis said. “There’s a real need for this in our community, and we feel strongly about it. We’re not giving up.”

Who Is Food Insecure in Orange County?

In 2016, 20 percent of the county’s food insecure population was above the poverty threshold and couldn’t qualify for food stamps or other nutritional assistance programs.

Learakos said there’s a common misconception that people who are food insecure are homeless, when in fact just seven percent of donated or recovered food feeds homeless people in the county.

“The bulk of it feeds working families,” Learakos said, adding that the high cost of living in the county causes difficulty in making ends meet. “That’s when they’ll go to a food pantry because it’s a safety net.”

Seniors comprise another large segment of the food insecure population, according to Learakos.

The county’s average meal cost, according to Feeding America, is $3.36.