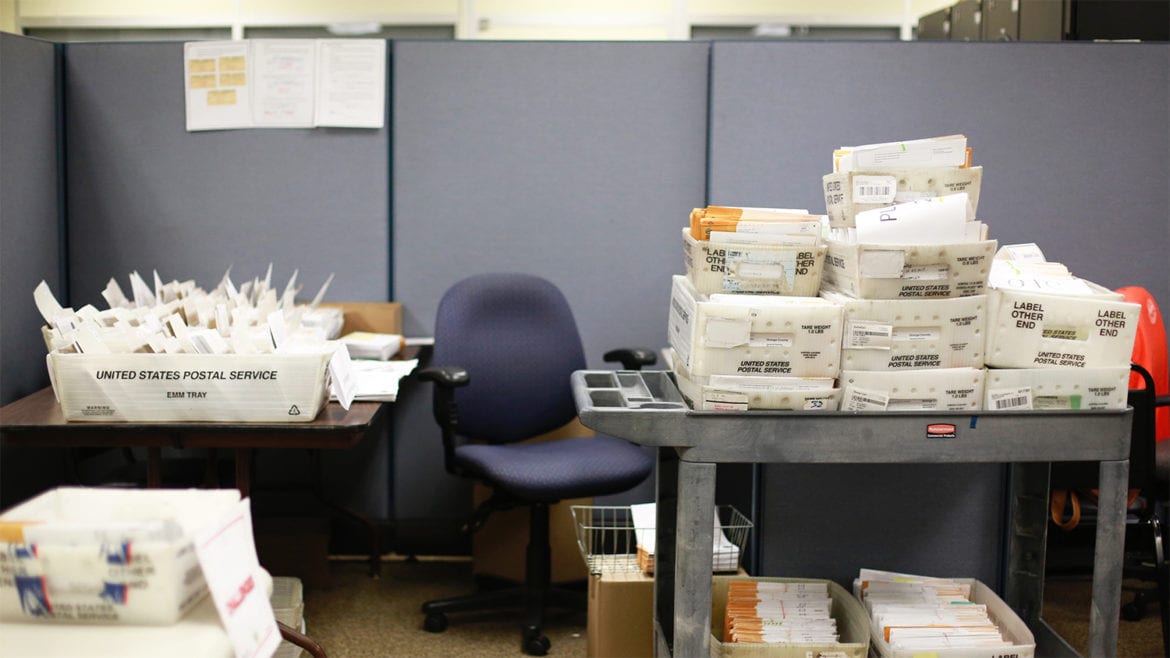 Ballots waiting to be counted at the Orange County Registrar of Voters office in 2018. A recall election is certain for Westminster, while a recall movement in Santa Ana could be headed there.

Democrats flipped a Republican-held Orange County legislative seat in this month’s election, and have been widening their lead for a second seat, according to the latest ballot counts posted Monday.

Assemblyman Matthew Harper (R-Huntington Beach) lost to Democrat Cottie Petrie-Norris in the coastal 74th Assembly District. Petrie-Norris held a 10,127-vote lead over Harper, who was first elected to the Assembly in 2014.

And in the 34th Senate District, which covers central and western OC into Long Beach, Democrat Tom Umberg’s lead continued to grow over state Sen. Janet Nguyen (R-Garden Grove), from 0.2 percentage points (or 438 votes) a week earlier to 1.0 points (or 2,532 votes) Monday.

With Monday’s update, 98 percent of all Orange County ballots estimated to be cast in the Nov. 6 election have been counted and reported, according to election officials. About 21,800 estimated ballots remain to be counted in OC.

“It’s still very much a purple county,” Stambough said. “So you see stuff like the gas tax repeal. It was popular in OC. There’s some issues that skew among the Republican side. But in terms of elected officials, it was hard to get past the R, because the R means something different now. The R means Trump.”

Mike Moodian, a Chapman University and Brandman University political science professor, said the increased Democratic vote in the state Senate race is a spillover from the top-ticket interest in Orange County’s Congressional races. All OC Congressional seats will be held by Democrats, after the four Republican-held seats were flipped to the Democrats in this month’s election.

On election night, Umberg was behind Nguyen by double-digit percentage points, but he eventually took the lead after after slowly closing the gap with each updated ballot count released by Orange and Los Angeles county election officials.

In 2012, Democrats had a 2-point advantage over Republicans in the 34th State Senate District, with 38 percent of registered voters While Democratic registration numbers barely grew to 39 percent by 2018, Republicans saw a sharp drop in registration numbers during that time frame, from 36 percent of voters to 29 percent, as no party preference voters grew from 21 percent to 27.6 percent.

Harper’s election night lead wasn’t as big as Nguyen’s. Harper was leading by 1,790 votes over Petrie-Norris, according to the first round of ballot counts. By the end of the night, Harper’s lead dwindled to 436 votes. Petrie-Norris, a political newcomer, took the lead by 620 votes Nov. 7 and her lead has grown since then.

In Matt Harper’s case, there was “a big get-out-the-vote effort by the Rouda campaign,” Moodian said. “And they voted for Cottie…someone I hadn’t heard of a couple months ago.”

“With the turnout being very anti-Trump and anti-Republican members, the otherwise safe Republicans are seeing themselves lose,” Stambough said. “A lot of people turned out to vote against Trump and anybody affiliated with [him].”

Orange County GOP Chairman Fred Whitaker, in an email newsletter Monday, said while the GOP was able to get its voters to the polls, some Republicans voted for Democrats.

“As a matter of fact, on many of the preliminary vote totals we’ve been looking at – significant numbers of Republicans we turned out, look to have voted Democrat. Whether it was on healthcare or the limitations on mortgage interest and state tax deductions, some of our voters defected,” Whitaker wrote about the Congressional elections.

All seven Congressional districts in Orange County will be represented by Democrats after they flipped four Republican strongholds in the 39th, 45th, 48th and 49th districts.

Stamough said the Democratic efforts produced a large number of mail-in and late ballots this election, which is why many Democratic candidates came from behind in early counts, to eventually take a lead over Republicans in many races.

“You can see that with the [get-out-the-vote] efforts, where the Democrats really pushed the absentee ballots – and particularly the ones that showed up on Election Day – which is why those counts are coming in late,” Stambough said.

Nguyen, a former Orange County supervisor, was first elected to the state Senate in 2014, when she easily defeated her Democratic opponent, Jose Solorio, by 16 percentage points or 26,572 votes.

Umberg, a former state assemblyman, is a retired U.S. Army colonel. It’s not his first time running against Nguyen.

In 2007, a special election was held for the 1st District supervisor seat vacated by Democrat Lou Correa mid-way through his first term when he was elected to the state Senate. Umberg finished in third place, about 1,200 votes behind Nguyen. Correa, now a congressman for the 46th District in central Orange County, easily won re-election this year.

Moodian said the political infighting between Nguyen and Supervisor Andrew Do leading up to the election could have done some damage to her standing.

“They used to be political allies and they had some sort of falling out over time,” Moodian said. “There was some nasty Vietnamese-language advertisements against Nguyen…that I believe could’ve seriously hurt Nguyen.”

Harper is a former mayor of Huntington Beach and comes from a real estate background. Petrie-Norris, who has never held elected office, comes from the finance and technology fields.

In the race for north OC’s 4th District county supervisor, Fullerton’s Democrat mayor, Doug Chaffee, increased his lead Monday to 1,239 votes, or 0.8 percentage points, over La Habra’s Republican mayor, Tim Shaw. Shaw’s was ahead on election night by 1,160 votes, but Chaffee gained ground in the days since and took the lead.

“It’s not just Congressional seats, or Nguyen’s seat,” Moodian said. “It’s very possible we can have a Democrat on the Board of Supervisors with Chaffee from Fullerton.”

And after Supervisor Todd Spitzer vacates his 3rd District seat and is sworn in as the new district attorney, Moodian said Democrats would have another chance to gain a board seat during the special election.

And in the tight Santa Ana mayor’s race, incumbent Miguel Pulido’s lead over Councilman Sal Tinajero narrowed very slightly, from 1.5 points to 1.4 points, or from 795 to 757 votes.

Also on Monday, the Orange County results, for the first time since Election Day, showed Democrat Gavin Newsom taking a narrow lead over Republican John Cox in the governor’s race. Newsom had a wide lead statewide, and Cox conceded on election night.

Spencer Custodio is a Voice of OC reporter who covers south Orange County and Fullerton. You can reach him at [email protected]. Follow him on Twitter @SpencerCustodio.