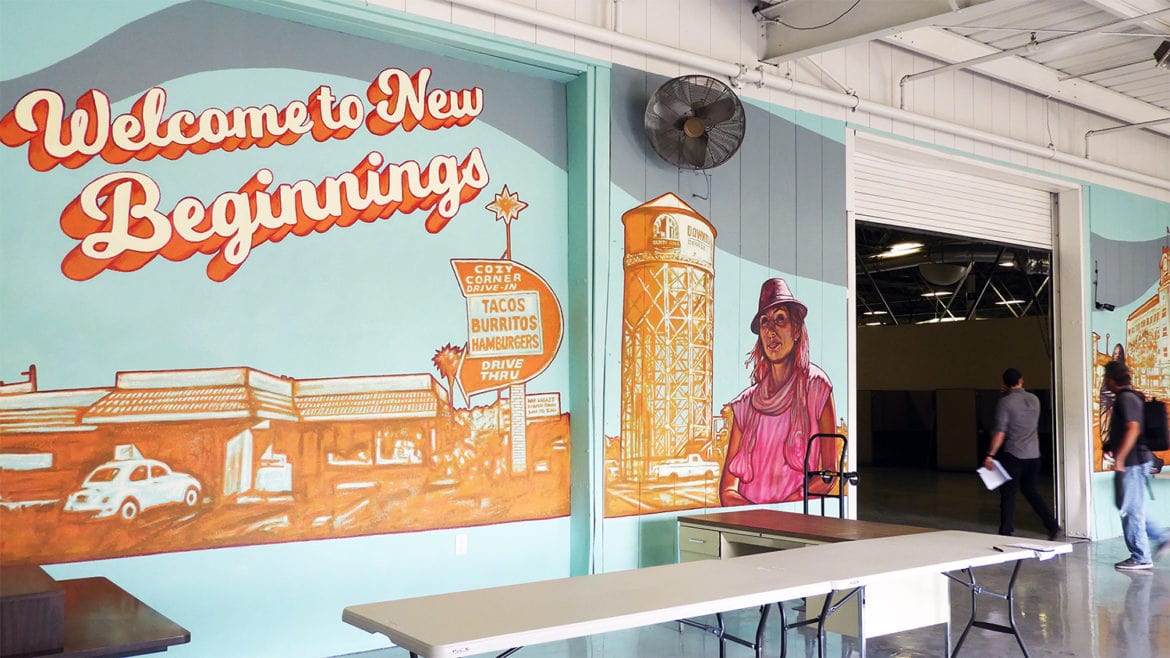 Santa Ana Thursday unveiled its new 200-bed interim homeless shelter, dubbed The Link, that has beds for single men and women, limited beds for couples and space for families.

Mayor Miguel Pulido said during the news conference, the opening of the shelter will help give U.S. District Judge David O. Carter some leverage over Orange County cities in a lawsuit against the county for evicting people from the Santa Ana Riverbed in January without providing enough shelter beds.

“Judge David Carter, federal judge, he really wants to get things done. And I think by taking this step here today, we’re able to strengthen his hand because he deals with other cities in Orange County,” Pulido said. “Now other cities aren’t going to be able to say they can’t do it, because we did it here.”

The shelter, on Red Hill and Warner avenues, next to the 55 freeway and Tustin border, is a two-year interim shelter with 90 beds for single men, 60 beds for single women, 40 beds for families and 10 beds for couples — the sections are separated by walls, but there are no privacy barriers between the beds. 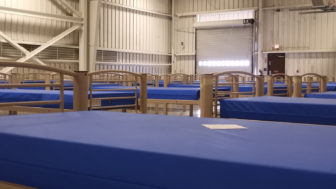 The men’s sleeping area, which has 90 beds. The mattresses are made out of material designed to stave off bed bugs and other types of similar pests. Nov. 15, 2018.

Pulido said the city will now be able to enforce no-camping laws because there will be enough beds to house the Santa Ana homeless. In a separate case, the 9th Circuit Court of Appeals decision Sept. 4 barred prosecuting homeless people for camping in public places if there aren’t enough shelter beds available.

“That might be the most important benefit to the city, because currently it can’t enforce any laws … they (homeless people) can be in a park, they can be anywhere. They may not have homes, but they have lawyers, these homeless folks. Now we can work with the lawyers … and enforce the laws — which means we won’t be the dumping grounds for Orange County anymore, which is very important,” Pulido told reporters after the news conference.

Pulido said the city is finalizing the purchase of a permanent homeless shelter site in roughly 30 days. He also said he met with U.S. Department of Housing and Urban Development (HUD) representatives at the site Wednesday night and learned Orange County receives roughly $500,000 a year in HUD grants, which can be used to help alleviate homelessness.

“In the city of Houston, their collective HUD assistance … it’s about $31 million a year. And we’re a county of over 3 million people and if we’re getting less than half a million … they’re obviously doing a better job trying to access federal money than we are,” Pulido said.

He said other jurisdictions need to start applying for the money.

“It’s not just up to us (Santa Ana), but it’s up to all of us, including different branches of government … city, county, state and federal — that’s what I want, I want everybody to do their share. When we do that, we’re going to see less homeless throughout the county,” Pulido said, adding HUD is sending a coordinator to the county to asses the situation and make suggestions.

The building once housed Ricoh Electronics Inc. and the “Ricoh” letters, although removed, are sun-stained into the top corner of the building. The building is in an industrial/warehouse part of town and is near an Orange County Sheriff’s training facility.

Santa Ana homeless services manager Hafsa Kaka said The Link is not a walk-up shelter and people will have to get a referral through a city contractor and checked out by the police department’s homeless liaison officer, before allowed in the shelter.

The shelter will have five computers so the people can access social services and look for work. The mess hall, which has a mural of Carter overlooking it, will have TVs in it and the family section has its own recreation room. 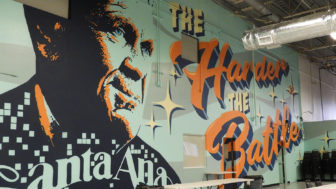 Mural of U.S. District Judge David O. Carter, who oversees the lawsuit against the county, by Brian Peterson, lead artist for Faces of Santa Ana. Nov. 15, 2018.

There’s also washers and dryers and the shelter will have mobile showers so people can bathe. Local artists painted murals in the main halls and intake area, which has a metal detector installed at the entrance. The lead artist was Brian Peterson, who painted the Carter mural, according to shelter staff.

Mercy House, a nonprofit organization that provides homeless shelter services, will run The Link. The organization also runs the Bridges at Kraemer Place in Anaheim, another 200-bed shelter.

Larry Haynes, executive director of Mercy House, said the organization is leasing the site from the property owner, the Vineyard Development Corporation, for $288,000 a year.

“It is my understanding the owner is donating a sizable chunk back to us for charitable reasons,” Haynes said. “They’ve been really good to us.”

Haynes said Thursday evening was the first day of operation and he expected about a dozen people to start using the shelter immediately.