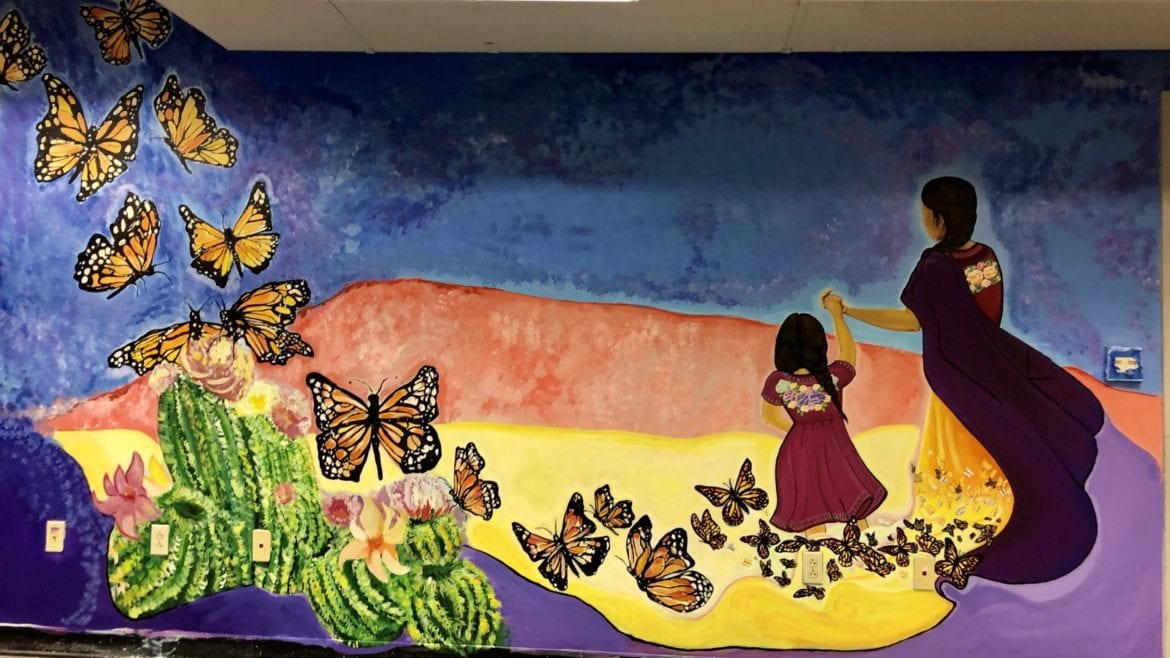 Monarch butterflies take flight in “Migration is Beautiful/Madres Emigrantes," a mural created by Alicia Rojas, with help from Briyana Negrette. The mural adorns a wall of Crear Studio, located in the basement of Grand Central Art Center in downtown Santa Ana. (Photo by Alicia Rojas.)

Immigration is a super-hot topic these days. It was a critical issue during the 2016 and 2018 U.S. elections, and it still seems to provoke passionate responses from the left and the right, plus many in between.

Orange County artist Alicia Rojas, a longtime member of the Santa Ana Community Artist(a) Coalition (SCAC), has just completed a mural in the basement of Grand Central Art Center, in the heart of Santa Ana’s Artists Village. It’s titled “Migration is Beautiful/Madres Emigrantes,” and it was unveiled to the public Sunday during a holiday meet-and-greet at Crear Studio, a community-engaged workshop created by two former artists-in-residence at Grand Central.

Rojas is a seasoned artist, muralist and participant in the downtown Santa Ana arts scene. She’s got nine other murals in Santa Ana, six downtown. Briyana Negrette, a Santa Ana native who lives in Garden Grove, is co-artist and a co-contributor to this mural.

The piece, which covers a wall of the underground workshop space, was commissioned by Crear Studio, with funding from its community engagement program.

In colorful acrylic, Rojas has painted a mother in Central American dress, holding the hand of her daughter, who is also wearing a flower-decorated, wine-colored dress. The two are walking along a yellow path, guided by the flight of more than a score of monarch butterflies. The butterflies, in this artwork, are meant to symbolize migration.

One can surmise from the title that this migration will be a beautiful, peaceful journey, one that will bring hope and not barbed wire, tear gas and the ends of U.S. military and Border Patrol rifles.

The hills look pink, yellow and purple, and the sky turns subtle shades of light and dark blue. One can see cacti and flowers blooming in the bottom-left corner of the mural. On an adjacent wall, some blue, yellow and purple oceanic waves flow out near the artist’s signature.

Rojas is a well-known figure in the Santa Ana Artists Village. She was co-founder and executive director of SACAC and a resident artist at AvantGarden the Art Gallery in the Santora Arts Building from 2003 to 2014. 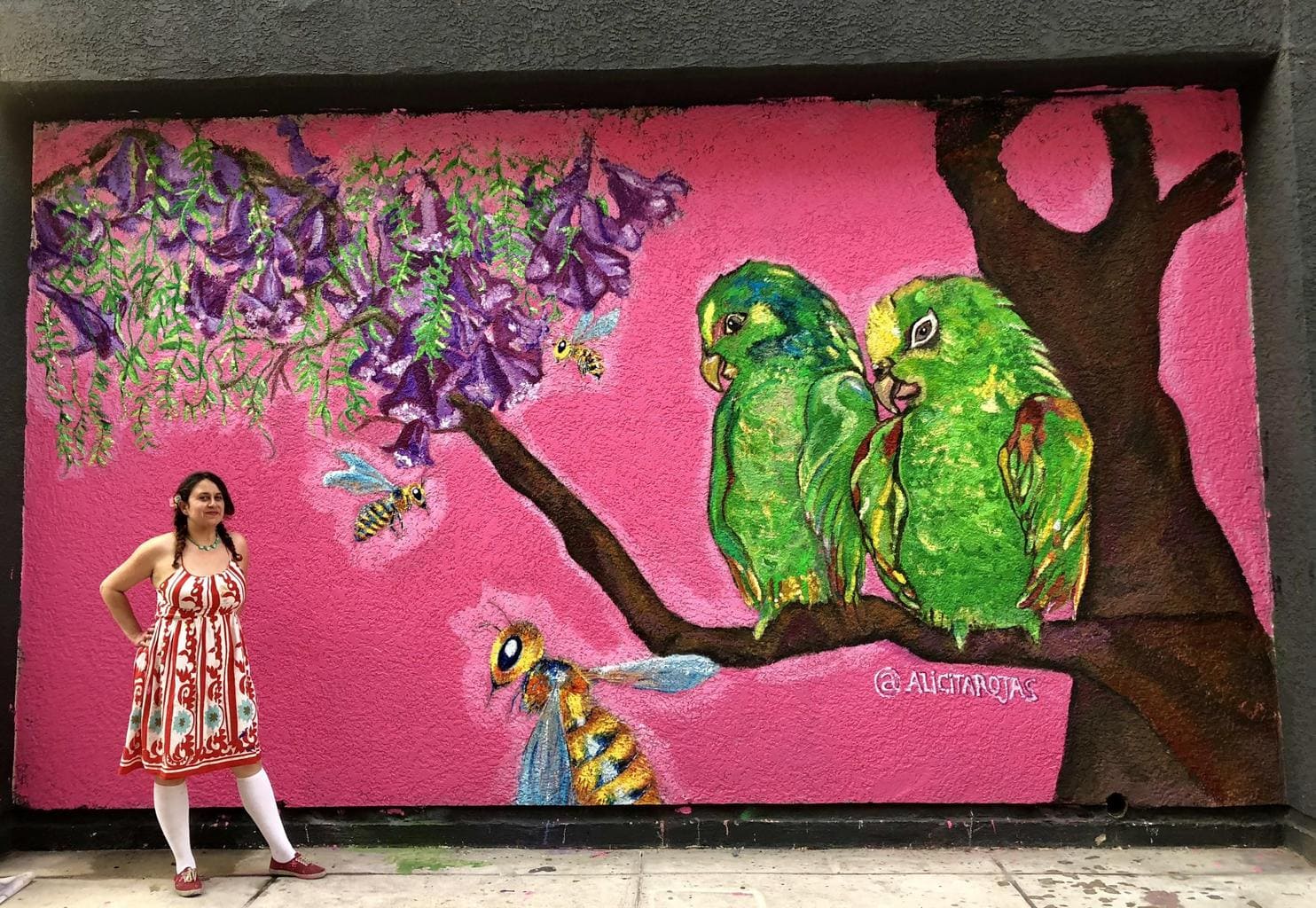 Artist Alicia Rojas stands next to her mural, “Un Amor de Loros Santaneros/ Parrot Santanero Love Birds.” Rojas finished this mural in November for Fourth Element Gallery in Santa Ana. The mural is in an alleyway off Broadway, on the exterior side wall of the gallery. (Photo courtesy of Alicia Rojas)

She is Colombian-American, and this year is celebrating the 30th anniversary of her arrival in the United States. She was born in Bogotá and immigrated to the U.S. when she was 12.

Rojas calls her style “emotional expressionism,” and she has done many portraits and self-portraits in her career. She says the “Migration is Beautiful” mural is inspired by her own mother and herself when she was younger.

One can see Oaxacan and Guatemalan designs in the mother’s and daughter’s clothing, as well as in the color scheme. The mural is an inspiring depiction of a positive migration, a joyful journey toward something better.

It’s not necessarily the most amazing mural I’ve ever seen in my life — there’s something a little off with the dimensions, especially when the butterflies hit the cactus area. It looks like one or two quite large butterflies actually get caught up in the cacti, and the flowers need better definition, being as close to the viewer as they are. But overall, the mural is pretty, positive, the colors are pleasing and the message is beautiful.

It’s a message — the benefits and joy of starting a new life in a new, bounteous and generous land — that our political leaders could stand to learn.