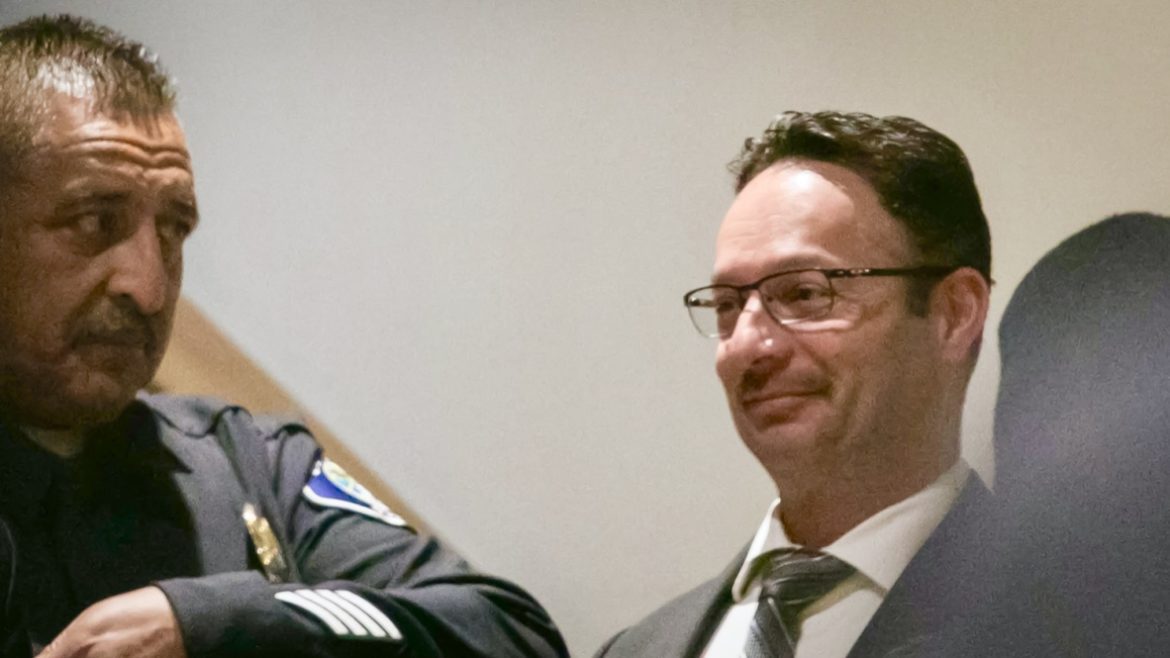 Santa Ana City Council members granted raises to police officers and sergeants totaling $25 million over the next two and a half years, without the ability to actually pay the $4.3 million cost for this fiscal year.

The City Council, on a 4-2 vote Tuesday, approved the largest police raises in over a decade, including a 19.3 percent salary increase for longtime officers. But the actual funding of the first year’s raises did not have the required support from five council members, and failed to pass.

That means the city now is obligated to pay police $4.3 million in raises over the coming months, without the legal authorization to actually fund it. City staff estimated that if the raises are paid, the city’s budget shortfall this fiscal year would grow sevenfold, from $600,000 to $4.8 million.

The Santa Ana Police Department doesn’t have enough money in its salary budget to cover the raises, City Attorney Sonia Carvalho told the council during its public meeting.

“It doesn’t do you any good to approve a contract if you don’t have the money to pay for it,” Carvalho said, prompting an eruption from the audience towards the council.

Voting for the raises were Mayor Miguel Pulido and Councilmen Jose Solorio, Vicente Sarmiento, and David Penaloza. Voting against it were Councilmembers Ceci Iglesias and Juan Villegas.

Councilman Roman Reyna didn’t attend the meeting, and agreed Wednesday morning to resign from the council, effective March 1, in order to end a lawsuit by a police union-backed candidate alleging Reyna engaged in election fraud.

The proposed raises brought dozens of residents to the council meeting, with nine people speaking against the raises and one commenter supporting it. 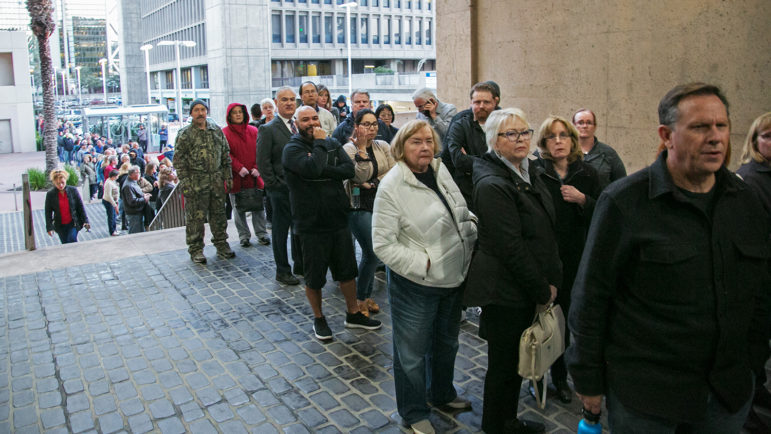 Residents wait in line to speak to a variety of issues, including the $25 million in police salary raises, at the Feb. 5, 2019 City Council meeting.

“The action tonight will basically take those funds that have not yet been received and will essentially write blank checks,” said David Benavides, a former councilman who termed out in November and joined those speaking in opposition to the raises.

Pulido, in supporting the raises, said, “All cities need police officers and it’s a competition out there and you can’t get away from it. I think we need to take some kind of action because we have more vacancies than anybody.”

“And it’s because we’re paying less than [other cities] are paying,” the mayor added, without citing any specific numbers  but saying cities that paid more than Santa Ana included Garden Grove, Anaheim, Fullerton and Long Beach. Santa Ana officials declined this week to show how Santa Ana’s officer pay compares with other cities. 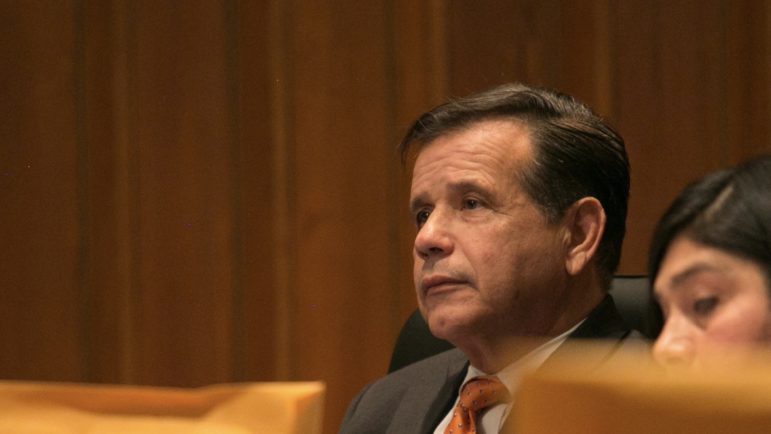 Iglesias warned the raises would push the city to a financial disaster.

“Bankruptcy is looming on us,” countered Iglesias. “If [the raises are] something that the council majority approves, it’s going to hurt.”

The raises amount to a total of $25 million in taxpayer money by 2021 and cost taxpayers at least $12 million per year after, according to city staff.

Before the last set of raises in 2017, the median compensation for a Santa Ana officer totaled about $213,000 per year, including $111,000 in pay before overtime and $88,000 in benefits, according to city data published by Transparent California.

Questioned by Iglesias, city Finance Director Kathryn Downs didn’t have an answer about how much in additional pension costs city taxpayers will have to pay in the long term due to the raises.

Without the raises, city taxpayers’ long-term costs for employee pensions were already projected to grow to $81 million per year by 2023, up from $22 million in 2014

The police raises could also lead to a raise request by the two-thirds of city employees represented by Service Employees International Union (SEIU), as happened in 2017.

With Iglesias and Villegas opposed and Reyna absent, council supporters of the raises led by Pulido found themselves one vote short of amending the city budget, and thus growing the budget shortfall from $600,000 to $4.8 million.

Pulido argued in favor of approving the raises anyway, despite the lack of votes to pay for them.

The contract between the city and police union, including all of the city’s payment obligations, was finalized and Pulido delayed the vote on the payment authorization for two weeks. It’s unclear how the police union, Pulido, and other council members who support the deal will come up with the fifth vote.

The police union is the largest spender on Santa Ana city council campaigns, spending over $500,000 during the November election to keep Pulido in his mayoral seat, add Penaloza to the dais, and support other police union-backed candidates. 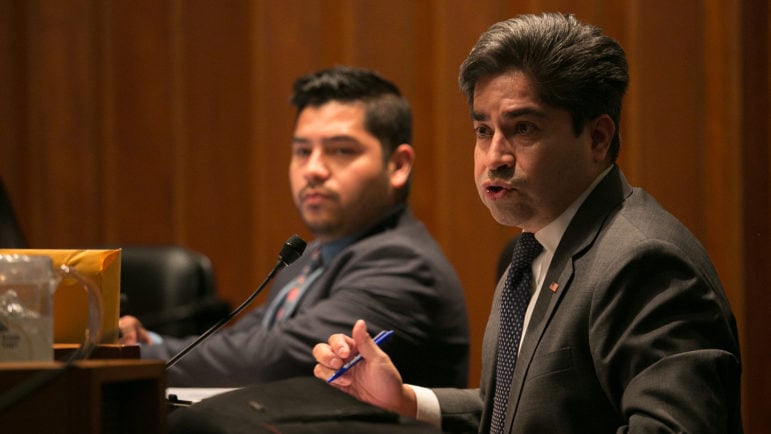 Gerry Serrano, the police union’s president, has been pressing for the raises for several months. Under the new contract, he will continue to be freed from his job duties as a police sergeant while receiving his full taxpayer salary plus an additional premium equivalent to 35 percent of his salary.

Serrano was the fourth highest paid Santa Ana city employee out of over 1,800 people in 2017, the most recent year available, according to city data published by Transparent California. He received $353,000 in total pay and benefits.

The contract says Serrano’s full leave is compensated by one holiday each police union member forfeits annually to the city. Serrano told Voice of OC in an email Tuesday his salary is covered by the union members, not by the taxpayers.

But Assistant to the City Manager Julie Castro-Cardenas said over the phone that the city ultimately pays for his salary. The paid holidays forfeited by union members are taxpayer-funded.

Serrano also disputed city staff’s budget projections, saying staff is misleading the public about deficits by showing $12.3 million in transfers out of the general fund this fiscal year, suggesting it wasn’t authorized by the City Council.

But city records show the City Council did authorize the $12.3 million in transfers out as part of its annual budget approval in July 2018. The transfers, which are on page 28 of the adopted budget, include $4.6 million in debt payments for the police department’s headquarters.

When Iglesias grilled city staff before the vote about the city’s pension liabilities and policy objectives of the raises, officials had difficulty answering at times.

When city staff said that Santa Ana currently ranks around 6th or 7th in the state — citing different studies — for police salaries, Human Resources Director Steven Pham couldn’t tell council members whether or not the raises would actually move the city up some spots.

“Throughout my time on the council, I’ve never seen it that bad,” said former Councilwoman Michele Martinez, who served on the council from 2006 to 2018 and warned the raises could lead the city to bankruptcy. “What you saw from city staff was fear of the council.”

“We’re not going to give you the services unless you give me more money. That’s how I understood it,” Iglesias said.

“I would never even indirectly imply holding our community hostage,” responded Valentin, who was the police union president’s top pick for the police chief job. Valentin said the raises would attract officers to the department and fill vacancies, thus helping to shorten emergency police response times. 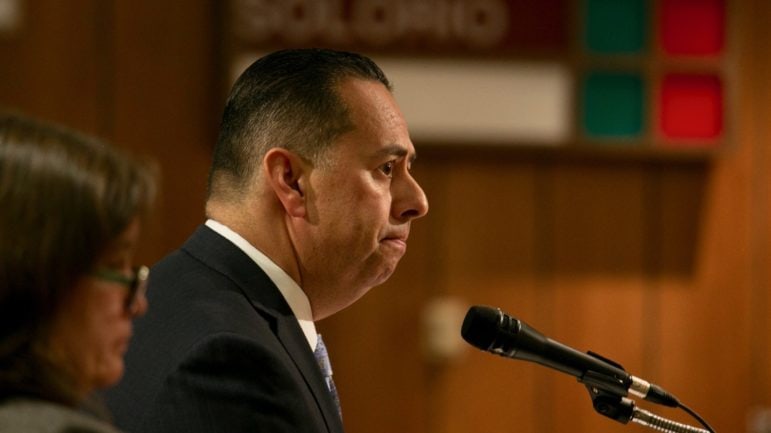 Villegas, a longtime Sheriff’s Department special officer who was backed by the police union in his 2016 election to the council, opposed the raises.

“In law enforcement, we have a saying: ‘Do the right thing and you won’t have to worry about anything,’” said Villegas.

“I always want to say that ‘I’m with you, I’ll always be with you’…But we have to be reasonable,” he said, addressing the police officers in the council chambers Tuesday night.

“This contract here is not the right contract in my opinion,” he said. “As long as I do what’s right, I can sleep at night.”