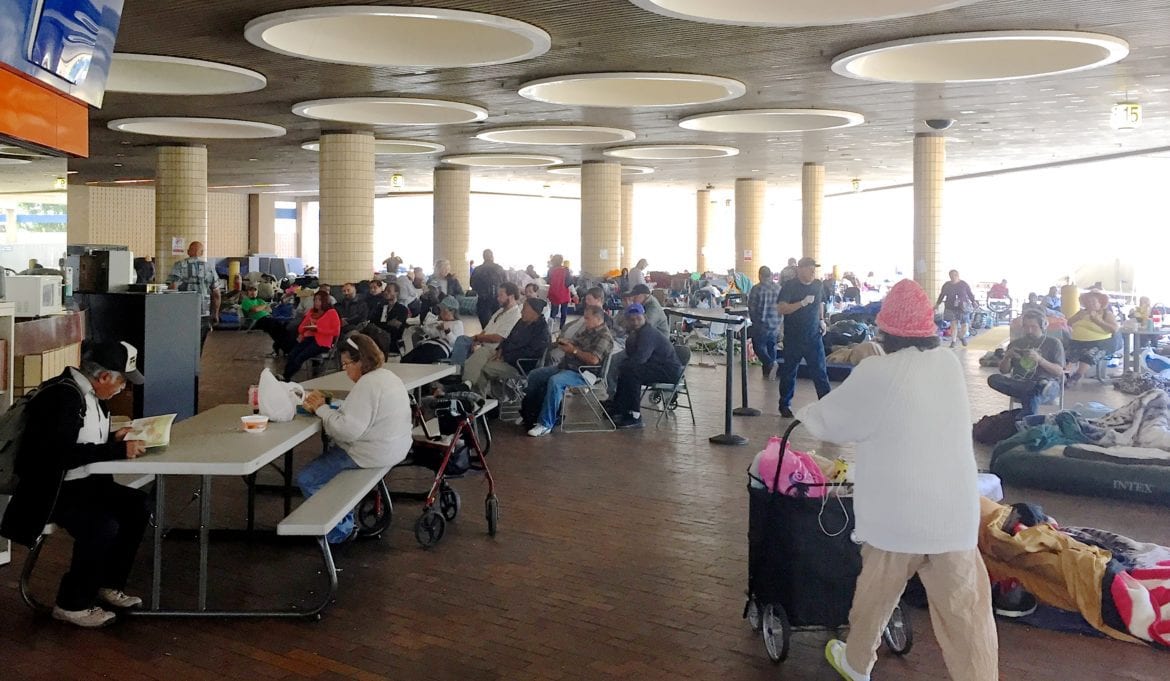 The scene at the county's first year-round homeless shelter, the Courtyard, a few weeks after after it opened in Santa Ana.

Orange County has missed out on millions of state and federal taxpayer dollars to address its growing homelessness by not being assertive enough in preparing for and seeking the funds, according to a federal judge and interviews with people who closely follow county homelessness policy.

Smaller counties than OC have asked for and received tens of millions more in funding for preventative health and housing programs that studies have shown save taxpayer dollars overall, help homeless people get off the streets, and save lives.

And by applying for and receiving less funds, Orange County taxpayers appear to have been subsidizing other parts of the state rather than bringing back a proportionate share of funding.

County officials say they’re doing their best in applying for grants the county is eligible for. Others say Orange County is now playing catch-up under outside pressure, and should be eligible for more money than it’s getting, after years of the Board of Supervisors historically not making a high priority out of seeking funding for homeless services.

The issue is now drawing attention in federal court, where U.S. District Judge David O. Carter last week pointed to the more than 250 homeless deaths in OC last year – up from 164 three years earlier – and questioned why OC was so far behind other counties in grant applications.

He noted other counties – similarly-sized San Diego County and San Mateo County, which is one-fourth the population of Orange County – applied for tens of millions of dollars more in grants than OC.

“San Diego [County] is at $125 million. We’re at $13 million,” Carter told a courtroom full of top county and city officials and members of the public, referring to applications in recent months for state mental health housing grants known as No Place Like Home.

Orange County has a budget of $31 million for its Whole Person Care program, while San Mateo County, which is four times fewer people than OC, plans on $165 million. Alameda County, which has about half the population of OC, received approval for $283 million.

“This is 100 percent matched, by the way,” Carter said of Whole Person Care.

“This county has walked away from hundreds of millions of dollars,” the judge told officials. “We’ve got plenty of money…are you willing to step up and start applying for federal and state monies?”

“It just seemed like Orange County, especially the previous administrations [with the boards of supervisors] were really hesitant to do anything,” Leon said, adding the county now is doing much more to seek funding.

For the Whole Person Care program, which uses federal Medicaid funds, “the county was just really slow to get involved,” particularly because it required the county to provide matching funds, Leon said.

County officials applied for the second round of funding but were behind by that point, he said, adding official data later showed the Whole Person Care program “just saved an enormous amount of money.”

County supervisors Andrew Do, Michelle Steel, Lisa Bartlett, and Doug Chaffee didn’t return messages seeking comment. The Board of Supervisors voted in 2017, long before Chaffee and Wagner were elected, to officially oppose the No Place Like Home law, which was known as SB 2 at the time and utilizes existing mental health tax revenues to fund housing and support services for people with serious mental illnesses.

The newest supervisor, Don Wagner, said county staff informed him the issue with OC’s No Place Like Home application was not enough private developers had projects.

“I understand from staff that the grants are awarded for private projects being done in the county,” Wagner said in a text message.

“It isn’t that the county failed to apply or vigorously pursue grant opportunities. Rather there  just weren’t as many qualifying private projects seeking the grant funding in Orange County as in some of the other counties Judge Carter mentioned.”

County staff also said that San Diego County was eligible for more money than OC because San Diego County had more than than 5 percent of the statewide homeless population in the 2017 point in time count.

“San Diego and 3 other counties (Santa Clara, Los Angeles and San Francisco) were designated by the state to utilize an ‘alternative process’ and were not required to compete for No Place Like Home (NPLH) funding,” county staff said in a statement. “They were allocated funds in a process that was NOT available to Orange County.”

Others say county supervisors historically haven’t taken leadership in encouraging private developers to prepare a pipeline of projects for state grants, and are now playing catch-up.

After the county’s 1994 bankruptcy – the largest municipal bankruptcy in U.S. history as of that time – supervisors made the steepest cuts to programs for people in poverty, including homeless outreach, job training for people with serious mental illness, and cutting in half the number of “contracts with community therapists that counsel and monitor thousands of families at risk of child abuse,” according to a news report at the time.

“It’s been the disadvantaged, the poor, the incarcerated who have felt what this bankruptcy is about,” then-Supervisor Marian Bergeson said at the time. “They have been the losers, and will continue to be.”

And there are questions about whether OC previously undercounted the county’s homeless population more so than other counties, and should have actually been in the higher grant funding category with San Diego County.

‘United Front’ Needed to Be Competitive

A year ago, supervisors were urged to help the county be more competitive for state grants by a former Santa Ana mayor and Irvine Company executive who is among the leaders of efforts to build more homeless housing.

“By having a united front – with a business plan that [county housing staff are] working on – we can go to the state and say, ‘If the money is here, we want our fair share,’ ” Dan Young told supervisors at an April 2018 board meeting on homelessness.

“The real question,” he told supervisors, “is how are we going to organize ourselves to be in a competitive position?”

At the homelessness hearing last April, county supervisors apparently had not been briefed by their legislative director, Peter DeMarco, on a major homeless housing bill known as SB 3, which the Legislature and governor had put on the ballot months earlier.

A supervisor pulled up the bill’s text on a cell phone during the discussion and asked if, in the future, DeMarco “could give us an analysis of this bill so we understand it.”

Questions About OC’s Past Homeless Counts

Orange County’s 2017 point-in-time count, which county supervisors outsourced to the nonprofit 2-1-1 Orange County, showed OC as having 3.6 percent of the statewide homeless population. That’s below the 5 percent threshold for more funding under No Place Like Home.

Other data, gathered by school districts instead of county contractors, shows OC has a much higher share of California’s homeless children.

Child homelessness data, gathered under a federal law known as McKinney-Vento, shows Orange County as having 10.8 percent of all homeless children statewide reported to school districts.

Numbers for the latest point-in-time count, which was conducted in January and county officials say will be more complete, haven’t yet been released.

Assemblywoman Sharon Quirk-Silva (D-Fullerton), whose brother was homeless in Orange County and died in October, said the county has lagged behind but now is getting more organized and working better with cities after court intervention.

“When we don’t go after the No Place Like Home funds and all the other funds, we really leave money on the table,” Quirk-Silva said.

“It isn’t that they’re not applying, it’s that they’re applying with a very narrow lens,” she added. “We could have…literally saved lives.”

Quirk-Silva’s 52 year-old brother, Raymond William Jaso, known as “Billy,” had chronic alcoholism and died in October after being hit by a truck while riding his bicycle in Buena Park.

Brooke Weitzman, one of the lead lawyers for homeless people in the federal lawsuit, said one of the reasons Orange County is behind in grants is it lacks much of the mental health and housing infrastructure that would make it more competitive for grants.

A 2017 UC Irvine study of hundreds of homeless people in OC found the total taxpayer cost was $50,000 for a chronically homeless person in housing with support services, versus about $100,000 if they were on the streets, mostly due to hospitalization costs.

“We need the infrastructure. We need the system of care. And I think the governments are now scrambling to create that, which is great and the right direction,” Weitzman said. “But catching up is hard. They’re starting the race 20 minutes behind.”