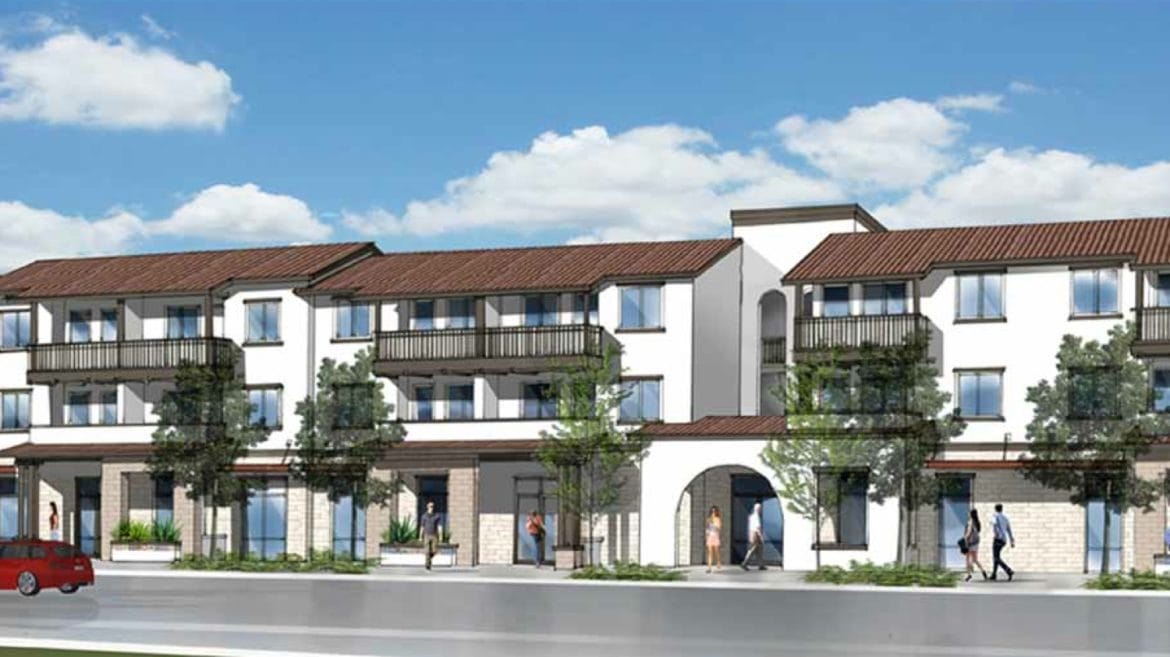 A rendering of the Santa Ana Veterans Village project, which the city awarded federal vouchers towards building 75 housing units for homeless veterans who would also receive job, health and other services.

A group of Orange County business and city leaders, working to create 2,700 units of permanent supportive housing for homeless people, called on other business, county and city elected officials Tuesday to join efforts and compete for hundreds of millions of dollars in state grants that could become available next year.

“By having a united front – with a business plan that [county housing staff are] working on – we can go to the state and say, ‘If the money is here, we want our fair share,’ ” Dan Young, a former Irvine Company executive who is spearheading a $100 million private financing campaign for homeless housing, said during a special Orange County supervisors meeting on homelessness.

If California voters approve a housing ballot measure in November known as SB3, Young said, combined with other state funding “there’ll be over $5 billion for the very kinds of problems that we’re talking about here, on a statewide basis. If we’re 10 percent of the state [population]…that looks to me like about $500 million that should be in this county.”

“The real question,” he said, “is how are we going to organize ourselves to be in a competitive position?” It starts with “collaboration” between county and cities, said Young, a former Santa Ana City Council member and mayor.

“We need a single financing vehicle, and we’re going to be in study and conversation with you [supervisors] on what that may or may not look like, and what your thoughts are on it as we move forward. Secondly, we need to have a business plan, and a narrative. We need to go to the legislature and say, ‘this is a county ready, willing, and able to get something done.’ ”

Third, he said, “we need a pipeline” from nonprofit housing developers, like Jamboree Housing Corp. and others, “who are going to have to go on good faith that these moneys will appear, that we will have our act together to go chase ‘em, that we are going to have a collaborative between cities and [the] county.

“If we do that, you will see 2,700 units built in this county, and you will have the back end of this [homeless services] system built,” Young said. “You all want to solve it. I think, working together, we will do just that.”

“We are working swiftly to bring together those willing partners and nonprofit service providers to engage in a collaborative and effective campaign,” said Heather Stratman, executive director of the Association of California Cities – Orange County. “I am extremely encouraged by the effort, and optimistic we will meet our 2,700 unit goal.”

Some of the cities and organizations that are working with Young and Stratman include Santa Ana, Anaheim, the Orange County Business Council, and Orange County United Way.

There still are many steps that remain and details that would have to be worked out, including who would oversee the housing construction, how contractors will be chosen, and what level of transparency there will be about finances. The plan calls for distributing the homes among the county’s 34 cities based on their population.

The funding measure, SB3, was put on the November ballot by the state Legislature, and asks voters to use existing state general fund money to pay for a $4 billion bond for affordable housing and veteran’s home ownership.

Jamboree, she said, has worked with other nonprofit developers and cities “to develop a pipeline of units that over the next 6, 12, 24, 48 months, can deliver about 1,400 units of needed housing.”

The gap in funding to develop the first 1,400 units is about $140 million, Archuleta said. The first 315 units of permanent supportive housing are “ready to break ground,” she said. Those projects are Santa Ana Veterans Village in Santa Ana (75 units), Econolodge in Anaheim (60 units), a project on a Buena Park city-owned property (60 units), Tustin Legacy in Tustin (60 units), and another project in Garden Grove (50 units).

For years, the county supervisors, who oversee homelessness and public health funding, rejected requests from advocates to substantially increase the county’s supply of housing that’s affordable for homeless people, including people with severe mental and physical disabilities.

But amid pressure from federal Judge David O. Carter to find safe places for homeless people to sleep – including women who have been assaulted and people with serious mental illnesses – Supervisor Andrew Do scheduled Tuesday’s discussion.

“The bulk of the back end of our system – and that is the permanent supportive housing – is the missing piece right now,” Do said. “We should use every tool that we have available under the law to accomplish this goal.”

Do added: “I pledge to you that we will be completely transparent in terms of our finances and our funding sources.”

“We all need to be on the same page about how much money we’re talking about, what resources we have, how much we have in reserves, and what part of the reserves we have can be used for what purpose…I know this meeting is being watched by the court, by others, including cities around the county.”

During Tuesday’s discussion, officials from Huntington Beach and Westminster announced plans to create up to 40 immediate shelter beds at the soon-to-be vacated offices of the nonprofit developer American Family Housing, in unincorporated Midway City.

Huntington Beach Mayor Mike Posey said the “bridge beds” will be a place where police officers can take homeless people. Westminster City Manager Eddie Manfro said he was “very excited” about the project.

It was the first announcement of a new city-supported shelter site since Carter’s federal court hearings began in mid-February. Carter is overseeing a case brought against the county by seven homeless people who were among several hundred ordered to leave camps along the Santa Ana River and move into cities with anti-camping laws, amid a shortage of shelter space.

During Tuesday’s discussion, Supervisor Michelle Steel said “hopefully” SB3 won’t be approved by voters “because the last thing the state [needs] is another $4 billion” in debt.

Do said the question is what the county should have in place to use the SB3 funds if the measure passes.

The supervisors apparently haven’t been briefed on the bill, which the Legislature and Gov. Jerry Brown placed on the November 2018 ballot in September.

Spitzer said he pulled up the bill’s text on his phone during Tuesday’s discussion and was “reading fast,” and asked if, in the future, the county’s legislative director “could give us an analysis of this bill so we understand it.”

The county is months behind schedule in releasing its much-anticipated upgraded computer system for tracking available services and beds for homeless people, known as HMIS, which stands for Homeless Management Information System.

The county’s homelessness czar, Susan Price, wrote in October 2016 that the switch to the new HMIS system was expected to happen in 2017.

But in her presentation Tuesday, Price said the new HMIS system is scheduled to be fully up and running on June 1. The existing system doesn’t track beds at the county’s emergency shelters, and Price did not return a phone message asking when the software problems will be fixed.

In response to those questions, county spokeswoman Molly Nichelson wrote in an email Tuesday evening that the information in HMIS is related to federally-funded programs.

“We are working to add the Courtyard and Bridges [emergency shelters] to the system,” she said. The two shelters are generally funded by county general fund money, rather than federal money.

Also at Tuesday’s meeting, county officials said the county’s Commission to End Homelessness, which Do got the rest of the supervisors to disband in January in favor of a different structure, has yet to be re-formed with new members.

Do didn’t propose candidates when he had the supervisors disband the commission, and other supervisors have been waiting for Do to propose them, according to a person close to the county.

The former commission was tasked with ending homelessness by September 2020, with its main focus to be on housing from September 2015 to its 2020 target date. But it wasn’t on track to meet its 2020 goal.

Regarding finances, county staff said the county now has plans to spend nearly all the leftover mental health funds that can be used to address homelessness, and that the county’s general fund reserves are below the levels recommended by the Government Finance Officers Association.

Following a March 8 Voice of OC article about unspent mental health money and questions from Carter about it at a March 17 hearing, the supervisors, at Do’s suggestion, voted March 19 to devote $70.5 million of the unspent mental health funds toward housing homeless people with severe mental illnesses.

“I think it’s important, at a minimum, for the court, to know [and] have an accurate picture of our finances,” Do said.

Do made a point of saying the county had spent all of its mental health funds in the largest category, known as Community Services and Supports, or “CSS” –  even though the board’s $70.5 million allocation has not been spent and likely won’t be for at least several months because it hasn’t been devoted to specific projects.

“We basically have drawn down completely our CSS funds. Is that right?” Do asked county CEO Frank Kim.

Kim replied that the board has “allocated them.”

Do pushed back. “Well, remember – not just allocated, we actually spent it, because we already purchased the Anita Drive [mental health campus] property…I want to make sure that it’s already spent. Is that right?”

“Here’s where we have to be careful,” Kim said. The supervisors, he said, have directed staff to “spend $70.5 million into housing. So as we’ve heard today that can take time. So that money now is earmarked, and will be set aside to be used only for that purpose.”