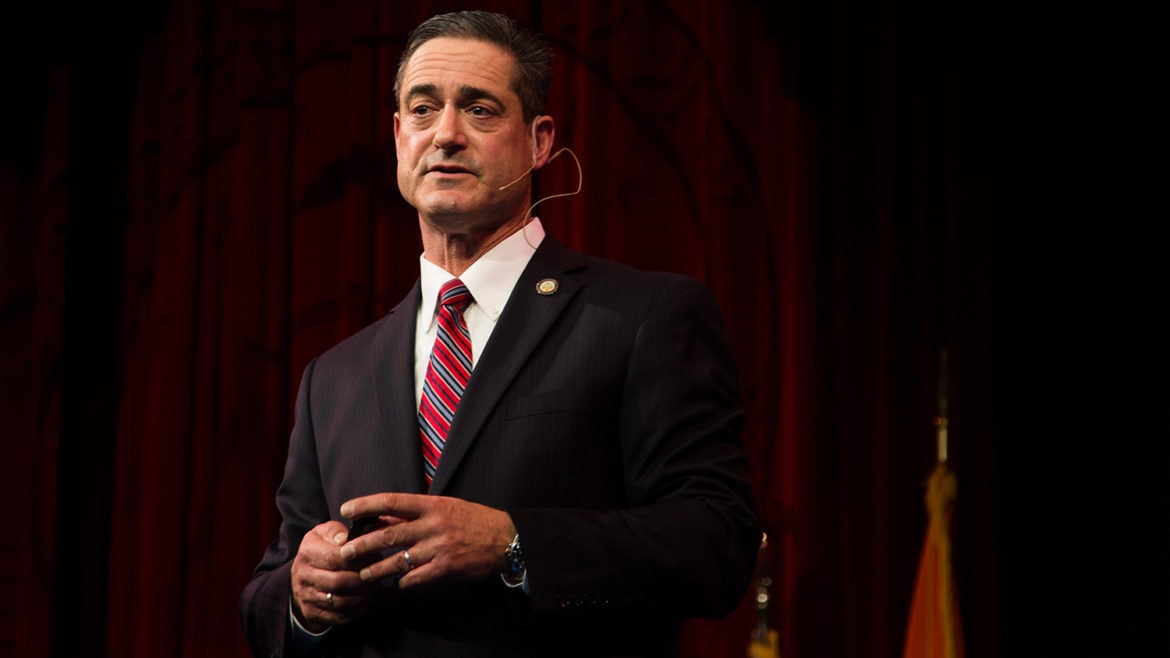 Todd Spitzer at his swearing-in as Orange County District Attorney in January 2019.

Orange County District Attorney Todd Spitzer is launching an internal investigation into the jailhouse snitch program, despite an investigation by state Attorney General’s office that apparently ended as of April 19.

The AG’s office has not yet responded for comment on the matter or confirmed an end of the jailhouse snitch investigation in OC.

“I have repeatedly relied on the California Attorney General – who has supervisorial authority over all 58 elected District Attorneys – to get to the bottom of the (former DA Tony) Rackauckas scandal in Orange County,” Spitzer said in a Wednesday news release.

The AG’s office apparently hasn’t clarified to Spitzer if the probe is over or not and Spitzer sent a letter Tuesday to the office for clarification.

“While seeking clarification from the Attorney General, I am now moving forward on Phase Two of my reform efforts. I refuse to wait for the Attorney General to make any conclusions given this lack of communication on inquiries. It is my responsibility as the recently elected District Attorney of Orange County to move forward with my own investigation into what occurred and what, if any remaining personnel, are responsible,” Spitzer said in the news release.

The jailhouse informant program was discovered by public defender Scott Sanders during the Scott Dekraai murder trial. Dekraai shot eight people to death in 2011 inside of a Seal Beach salon, including his ex-wife.

Although Dekraai confessed to the killings to law enforcement and pleaded guilty in 2014, former Superior Court Judge Thomas Goethals threw out the death penalty because the Orange County Sheriff’s Department used a secret jailhouse informant to get a confession from Dekraai and the department gave the confession to the DA. County prosecutors, headed by Tony Rackauckas at the time, didn’t share the informant’s background working with prosecutors with Dekraai’s defense attorney, Sanders.

Goethals, now an appellate judge, also removed county prosecutors from the case in 2015, leaving the Dekraai prosecution to the Attorney General’s office, which was headed by now-U.S. Sen. Kamala Harris (D-Los Angeles).

Harris launched the criminal probe in 2015 and also appealed Goethals’ order barring the DA’s office. She lost the appeal in a unanimous decision by the 4th District Court of Appeal, where Goethals now works. The court also found “systemic problems” with the illegal jailhouse informant program.

Chapman University law professor and former federal prosecutor Lawrence Rosenthal said Monday that a criminal investigation into the jailhouse snitch was dead from the start.

Rosenthal said real changed would’ve happened sooner if a complaint would have been made to the state bar association — the body that regulates attorneys — or if the State Legislature was pressured, especially the state Senate Judiciary Committee.

“If the state Senate starts putting teeth on the Attorney General’s office, the Orange County District Attorney — that will get results,” Rosenthal said.

Or change could happen if prosecutors at the DA’s office had their licenses threatened, Rosenthal said.