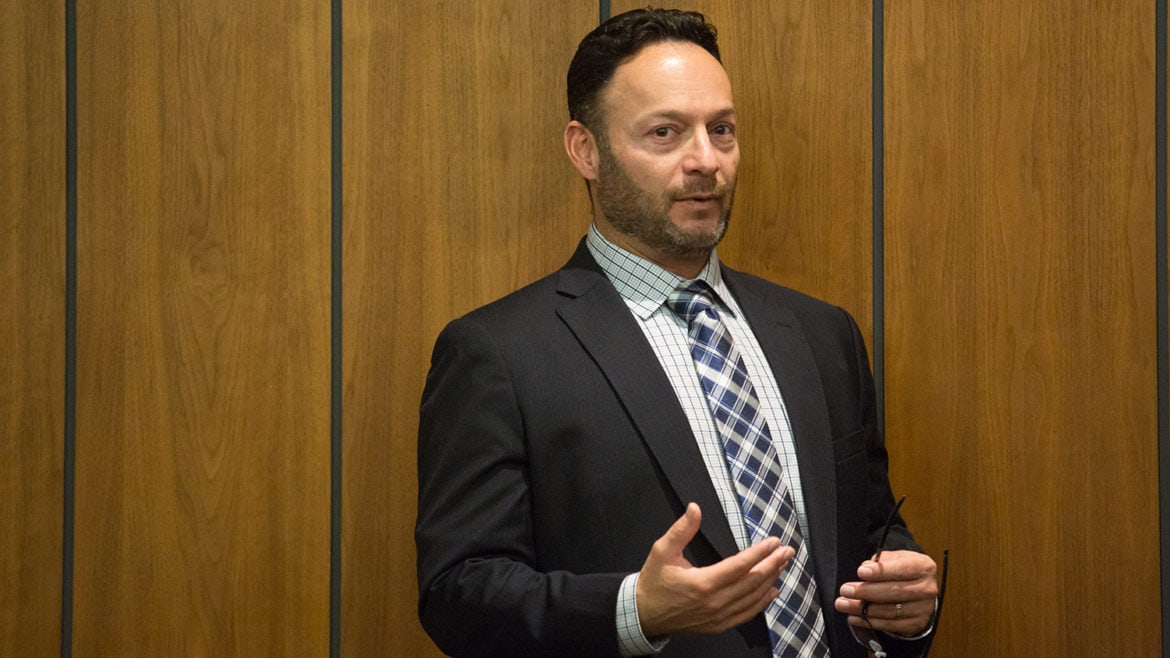 Gerry Serrano, president of the Santa Ana police union, at a City Council meeting in early 2019.

Two longtime Santa Ana police officials – including the former police union president – have filed a lawsuit alleging an “illegal scheme” by police union officials to elect City Council candidates in 2016 who pledged to oust the then police chief and city manager in exchange for $400,000 in police union campaign support.

The union spent $404,000 that election – more than any other campaign spender – supporting its endorsed candidates and opposing their challengers, according to public disclosures.

The lawsuit was filed against the city in February by former police union president John Franks – who was a Santa Ana police officer for 25 years until he retired last fall – and his wife Laura Franks, who also has worked for the police department for about 25 years, according to the lawsuit.

They allege the current police union president and police chief retaliated against them for John Franks not going along with the “scheme” to oust the prior police chief, Carlos Rojas, including demoting Laura Franks and stonewalling John Franks’ effort to get hired by the Orange County Sheriff’s Department.

And in a corroboration of testimony by former police chief Carlos Rojas, the suit alleges the current union president, Sgt. Gerry Serrano, held a grudge against Rojas stemming from Rojas’ discipline of Serrano for a 2011 hit-and-run DUI arrest, and later worked to oust Rojas as part of an “illegal scheme.”

Westminster police, in their report about the October 2011 incident, said Serrano rear-ended another car near Westminster mall and “fled the scene,” with investigating officers determining he “was driving while impaired by alcohol.”

“I could smell the odor of an alcoholic beverage coming from his breath,” the police report states. “Serrano’s eyes appeared watery and bloodshot and his speech was slurred.”

Serrano berated the responding officers, according to the police report, saying they “were sick, pathetic, and we had better not come to Santa Ana.” After being brought to jail, Serrano attempted to “chest bump” one of the officers and called him an “asshole” and a “piece of shit,” according to the report, which cites audio and video recordings as evidence.

Serrano refused to take a breath or blood test, according to the police report, and Westminster officers recommended the DA prosecute him for two misdemeanors: DUI and hit-and-run after causing property damage.

“Serrano was justifiably disciplined by former Chief Rojas for this conduct. To this date, Serrano has maintained a grudge against not only Chief Rojas, but against those perceived to be loyal to the former Chief,” the lawsuit states.

In statements Monday, Serrano and the city said the lawsuit levels false claims, without specifying which allegations they dispute.

“The City of Santa Ana denies the allegations contained in the lawsuit filed by John and Laura Franks,” city officials said in a statement after Voice of OC asked for Valentin’s comment.

“The City treated Mr. and Mrs. Franks fairly and followed City/Department personnel rules and state laws in all aspects of their employment. The City looks forward to vigorously defending allegations against itself and its employees.”

Serrano, in response to the specific lawsuit allegations, said in a statement, “How sad to see the Franks family’s unethical lawsuit and attempt to squeeze public funds.”

“The city of Santa Ana provided the Franks’ family with so much to include special and preferential treatment for decades. Their allegations of wrongdoing are without merit and only for the purpose of self-financial interest,” Serrano added.

Lawrence Lennemann, the Franks’ attorney for the lawsuit, didn’t immediately return a phone message for comment.

The lawsuit alleges Serrano, after Rojas disciplined him for the alleged DUI incident, engaged in a “scheme” to oust Rojas from his job leading the Police Department.

The goal “was to assure the election of certain candidates for [Santa Ana] City Council who, in advance of the 2016 election and in order to receive $400,000.00 in [police union] support, ‘pledged’ to vote to support removal/termination of both then-Chief of Police Carlos Rojas and then-City Manager David Cavazos,” the lawsuit states.

City Council members described this “in testimony under oath as ‘illegal’, ‘bribery’, ‘extortive’, ‘coercive’, ‘corruption’, ‘against the law’ and ‘in violation of [the city] Charter,” the lawsuit states.

“This scheme eventually led to City Manager Cavazos being ‘severed’ pursuant to an approximately $400,000.00 payment and led to, in December of 2018, Chief Rojas settling his constructive termination lawsuit against [the city],” the lawsuit states.

John Franks, who had served as police union president from 2011 until spring 2016, “refused to participate in the illegal scheme,” so officials forced him “to resign from his position as [police union] President so that [police] Sergeant Gerry Serrano could take control of the [union],” the lawsuit states.

Cavazos was pushed out in December 2016 by the new City Council that took office after that year’s election, and Rojas announced his resignation about four months later, in April 2017.

Valentin, the current police chief, was Serrano’s top pick to replace Rojas as police chief. Valentin started leading the Police Department in June 2017 on an acting basis, and was appointed permanent police chief in February 2018.

After Westminster police recommended misdemeanor charges against Serrano for DUI and hit-and-run, it was up to the District Attorney’s Office whether to prosecute the case.

The DA’s office declined to file charges against Serrano, whose wife has worked at the DA’s office since the mid-1990s, including as an investigative assistant from 2007 to present.

The district attorney at the time was Tony Rackauckas, with whom Serrano appeared in campaign ads for this past fall while wearing a police uniform. 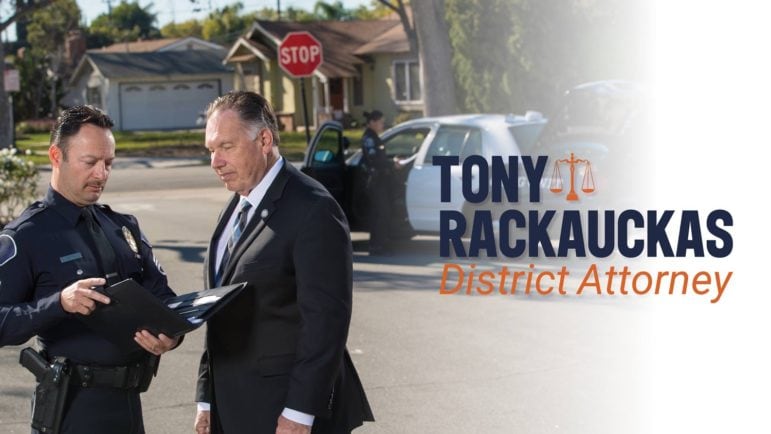 Spitzer’s office declined to say who made the decision to not file charges against Serrano and what the reasoning was.

The DA’s office referred to a prior statement last fall by then-spokeswoman Michelle Van Der Linden, who said: “I can confirm this case was received and rejected due to insufficient evidence.”

“A [field sobriety test] was not conducted and blood was not taken, so there was no evidence to prove the case beyond a reasonable doubt,” the statement added.

Spitzer’s office declined Monday to say whether DA officials, in their decision to not file charges, took into account the officers’ audio recordings and Serrano’s refusal to take a blood test.

The lawsuit also alleges Valentin sexually harassed Laura Franks with “ongoing sexually-inappropriate statements, texts and actions,” around 2010 to 2013 when Valentin was a lieutenant supervising her.

Valentin later apologized, the suit says, telling Laura Franks, “According to my wife I am a better father than I am a husband,” the suit states. This left her feeling “awkward, uncomfortable, confused and disgusted,” according to the suit.

A high-ranking city human resources official said Serrano was in charge of the city and that Valentin was “in debt” to Serrano for the police chief job, according to the lawsuit.

Ellen Smiley, the city’s assistant personnel director, told Laura Franks during an October 2017 meeting Serrano was “running the city,” and that Valentin was “in debt” to him “and “ ‘owed’ his Acting Chief position to Serrano,” the lawsuit states.

“Ms. Smiley felt that Valentin would be reluctant to go against…Serrano’s wishes,” the lawsuit states.

In retaliation against John Franks, the lawsuit alleges Serrano and Valentin worked to block Laura Franks from being classified as a background investigations supervisor, a role the lawsuit says she had been performing for years without the required pay raise.

The lawsuit says Laura Franks was “an exemplary employee, has been recognized numerous times for her meritorious performance and for her leadership and has no disciplinary issues or blemishes in her employment record.”

She became an experienced background investigator for the department’s new hires, with Valentin at one point recognizing her as “Non-Sworn Supervisor of the Year,” and she rose to become the Background Unit’s supervisor, the suit states.

“For the last approximately five years, [Laura Franks] has not only been the highest producing Background Investigator but has been recognized by all administrative staff within the police department (as well as outside of the immediate police department) as the leader and supervisor of the Background Unit,” the suit states.

While Laura Franks’ duties were those of a “Background Unit Supervisor,” her lawsuit states the city “failed to properly compensate” for the upgrade pay she was owed under the labor contract.

Ultimately, Valentin demoted Laura Franks to a jail job rather than recognize her background investigation supervisor position with the title and pay she was supposed to receive, according to the suit.

The lawsuit also alleges Valentin retaliated against John Franks by waiting months to sign paperwork that would allow Franks to transfer to a job at the Orange County Sheriff’s Department, to the point where the sheriff job offer was rescinded.

Serrano and Valentin’s retaliation reached the point where the city’s own human resources director, Stephen Pham, said the couple should sue, according to the lawsuit.

“Mr. Pham (an attorney) told [John Franks] several times that he had a ‘good lawsuit’ against Serrano,” the lawsuit states. “Mr. Pham told [John Franks] that, never in Mr. Pham’s 30 years had he seen a [police union] President target members like Serrano was doing to both LAURA and to JOHN.”

“Mr. Pham described that Serrano ‘needed to be sued’ as he was ‘drunk on power’,” the lawsuit states.

The lawsuit, which is in its early stages, was assigned to Superior Court Judge Theodore Howard. City officials had not responded to the lawsuit in court as of Monday.