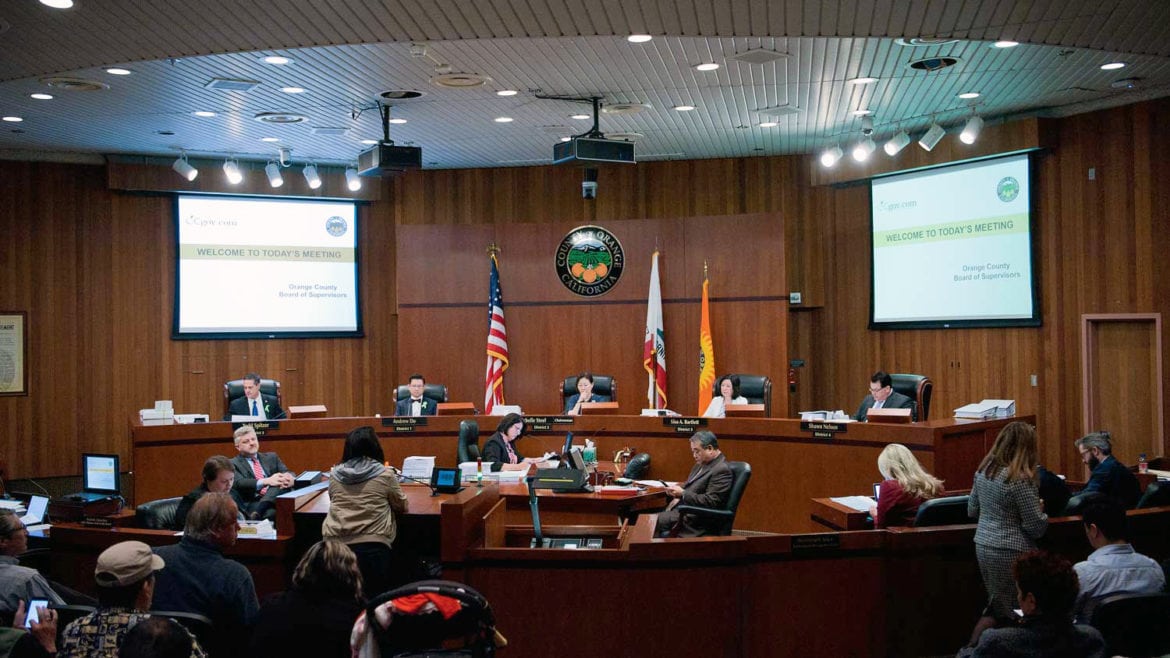 The Orange County Board of Supervisors has public comment at its May 2018 meeting.

“Deliberate encroachment on the public’s ability to speak is intended to silence dissent, be it through the slashing of time available to each speaker, or by shifting public comment periods to the indeterminate end of an open meeting”, said Jeanine Robbins Peoples Homeless Task Force.

“If freedom of speech is taken away, then dumb and silent, we may be led, like sheep to the slaughter.” George Washington.

Jeanine Robbins continues, “This right of Americans to address public officials in an open forum is engrained in our Constitution, and is the law of the land. These principles apply even if the public officials have to face evidence-based solutions and arguments that stand in contrast to their own positions. A desire to remain willfully ignorant does not provide a magical loophole by which public speech can be curtailed”.

What are our rights today and has the constitution been trashed? Somehow hundreds of people – more – thousands of people wait to give evidence or opinion on many issues in the public domain and are stifled by the BOS and city council rules made up on the fly to mute the electorate.

At the Orange County Board or Supervisors (BOS) they limit your time to speak – if there are more public speakers than they might like to listen to – they shorten your speaking time from 3 short minutes to an even shorter 2 minutes, but in some cases they have cut public comment to a ridiculous 1 minute per person.

Then, to completely squash the public speakers, the BOS moved the general public comments to the end of the meeting. A BOS meeting can be several hours long, and the Supervisors get $150,000 a year plus sweet benefits to be there, it is their job. All the people I know that come to speak on important issues have jobs or other commitments over the course of a day. They can rarely wait for this delayed speaking time to arrive.

As a political advocate the first salvo is standing before City Councils or the BOS during public comment periods. This brings new concerns to the attention of elected bodies and moves the issues forward.

In our issue – homelessness – we brought the topic to the forefront in public comments at the beginning of the meetings. Advocates on important issues can rally friends and supporters to their cause, but most cannot dedicate several hours in the morning/afternoon on a week day. Experts are reticent to come to an un-specified time slot and give their professional input on an important issue and even then be relegated to a 1 minute presentation at the random discretion of city councils or the BOS.

If you are a properly committed advocate on any issue and wish in any sense to be taken seriously you need a thousand hours of research, including expert’s reports and the examination of thousands of internal government dialog pages acquired through document requests.

This is your ammunition for the fight ahead with the politicians and of course tasty food for the associated press and following news stories that hopefully will support you if your information is accurate and stirring.

On the homeless issue, solutions have been offered by experts from across the county, state, country, and the world. For the last few years these evidence based studies have been presented to the city councils and the BOS during public comment. Then they have been summarily ignored at the whim of political forces and with pressure from what we call “homeless haters”. Others call them BANANAs “Build Absolutely Nothing Anywhere Near Anybody”.

Experts from UCI and United Way have presented the studies dating back 30 years about the facts and solutions for the homeless people. An ongoing campaign from United Way is on right now to inform the public of the facts.

We reiterated to the City Councils and Board of Supervisors that the cost is $100,000 per individual left on the streets – but only $50,000 to put them in housing with wrap around services. Leave them to die on the streets – 240 homeless people died on the streets of OC in 2018 at the average age of 49 – or save them – the evidence based studies presented by all the experts say we could save 83% of those human beings.

To utilize the 3 minute rule we had 30 people follow each other and present, over a one hour period, a complete disclosure of the BOS budget. This discovery process uncovered the hundreds of millions of dollars NOT being used for the designated homeless and mental health services, and a big $1 BILLION+ in discretionary funds that could be used in addition to the $250 million not being utilized.

To subvert this process, elected officials at the city and county level seek to limit public input or squash it completely. It just makes them look bad if experts come in and say “do this, that works” and the biased idiots do something the complete opposite due to political motivations or bigotry.

This holds the same truth if the general public comes in to quote the evidence based studies on any subject substantiated by all the experts or through document requests and then is ignored, subjected to ridicule or cut short by elected politicians.

Scientists & doctoral experts in every field often give unopposed and equally substantiated evidence on many subjects and are summarily ignored by politicians across the spectrum.

Do people want to hear the facts? How many times must we present the numbers on the homeless population for instance?

Let’s use cancer as an example. Thousands of studies are presented to the doctors and hospitals about the life saving procedures that save the lives of most patients and doctors “always” use them. Imagine if they dismissed the studies and sent everyone with cancer home with a bowl of chicken soup. That just sounds insane does it not?

For the homeless people, the politicians and Judge Carter chose the path that has no evidence based studies to support it – shelters – chicken soup for the homeless. Next will they suggest blood letting?

We certainly accepted studies on cancer and embraced them to save lives. When will we do that for the homeless people?

Eventually it seems, if there is enough public input on important issues the politicians cave and sometimes, sometimes “do the right thing” based on the mountain of evidence placed in front of them.

If they obstruct the evidence by limiting the voices of advocates and experts then they can never hope to be progressive, learn the facts and perhaps change direction.

Even the staunchest of ridiculousness has been defeated with time and a mountain of evidence to support change. George Wallace, the infamous Governor of Alabama, took an immoral stand against integration.

In conclusion to block public input on any subject is against the basic rules of an open society. Politicians and judges alike, who choose to ignore or distort the facts, are just stupid and dangerous, not just to the lives of homeless people, but to all of us all the time.

As Jeanine Robbins said, “This right of Americans to address public officials in an open forum is ingrained in our Constitution, and is the law of the land. These principles apply even if the public officials have to face evidence-based solutions and arguments that stand in contrast to their own positions. A desire to remain willfully ignorant does not provide a magical loophole by which public speech can be curtailed”.