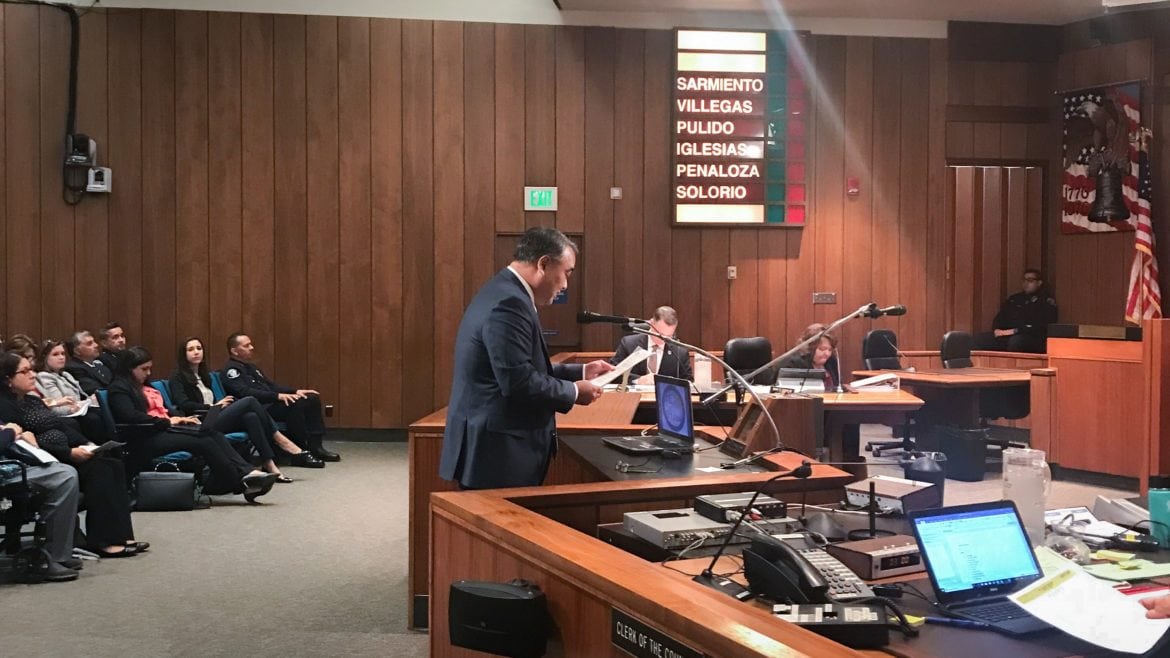 County Executive Officer Frank Kim showed up to the meeting to read Supervisor Andrew Do’s statement on his behalf.

All work and construction on a new homeless shelter has stalled in Santa Ana, as city and county officials continue to point fingers over an apparent lack of public input on the effort to relocate homeless people from the Courtyard shelter in downtown to the new location on Yale Street.

The new shelter, according to a Sept. 4 agreement between the city and county, was purchased by the county for over $12 million in November last year. It’s set to have 600 beds, 475 of which will be occupied by those currently staying at the Courtyard in downtown, an open-air bus terminal that’s been criticized for poor living conditions. The rest of the beds have been prioritized, according to city staff, for homeless Santa Ana residents.

Orange County Supervisor Andrew Do, in a statement to Santa Ana City Council members, said he was the one who ordered county staff to halt work on the Yale Street site because “there has been no community outreach or information from the city to inform the community of the city’s plan to house the homeless” at the new location.

City Council members responded by criticizing Do’s failure to appear at the Council’s Tuesday meeting. Instead, County Executive Officer Frank Kim showed up to the meeting to read Do’s statement on his behalf. Santa Ana is part of Do’s supervisor district.

Council members also argued that public outreach is the county’s responsibility, and had City Attorney Sonia Carvalho give her legal opinion that the county, as the owner of the Yale Street site, has the “preemptive authority” over the city to hold public forums.

“I’m pretty disappointed that our supervisor isn’t here to address our concerns,” said Councilman Vicente Sarmiento during the discussion. “The county has a vested right to address this problem – this is your responsibility, not our city’s … We’ve been shouldering this problem for years.”

As part of the city’s agreement with the county, Santa Ana is contributing all of its $ 3.5 million in state Homeless Emergency Aid Program dollars to the County to fund the County’s acquisition and improvement costs for the site. On top of that, the city will contribute $1 million for the operation of the site for 15 years.

Public forums were something Santa Ana resident Chris Schmidt and others around the Yale Street property say they had requested last year.

“Myself and other Santa Ana residents asked the city to hold community forums so we could have input on the proposed shelter location,” Schmidt said in an email after the meeting. “But our requests were ignored.”

“We should have some community meetings,” said Councilman Juan Villegas after Kim finished reading Do’s statement, “but stopping construction right now is just gonna delay everything.”

Do in his statement also addressed “comments from some on the city council that I do not support and stand up for the city of Santa Ana” by calling those claims “utterly false and completely baseless.”

“For the past year, I have consistently stood up in federal court and stated that Santa Ana has carried more than its burden of taking care of the needy.”

And work won’t continue on the project, according to Do, until “the current City Council has heard from the community and reaffirmed through their votes their support for the project.”

“I never supported Yale,” Sarmiento said. “I think this is something that’s specific to district one and the anchor city, which is Santa Ana … There are certainly other places where this site could go. Irvine was mentioned. Costa Mesa could step up. This isn’t only our problem.”

“I brought the” memorandum of understanding for the Yale Street location “from the county to this group in November, when we had discussions about what the implications were moving forward,” Gominsky said. “Since that time and since Santa Ana ratified that agreement, the city of Costa Mesa has stepped up with a homeless shelter, mostly because we made the rest of the cities look at themselves.”

“But today I stand before you now with my heart unchanged,” he added. “I understand the concerns of the residents of this city – I understand that every city in this county must stand up and do more. It is without question. But we have to put our homeless population somewhere.”