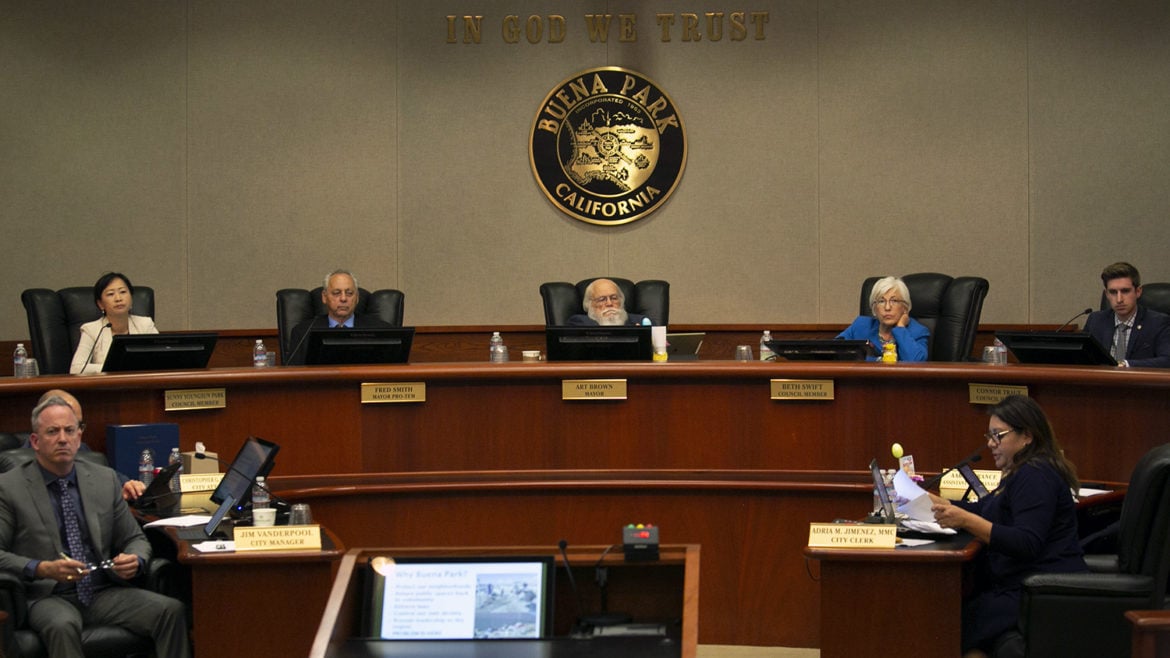 The Buena Park City Council discusses and listens to feedback around building a homeless shelter in the city at its April 10, 2019 meeting.

The nonprofit Mercy House will operate Buena Park’s new $2.6 million regional homeless shelter, though there’s scrutiny over an apparent lack of public input when a select committee of public officials and homelessness experts recommended their preferred contractor to the City Council.

City staff indicated for months they were looking at modeling the year-round, 150-bed shelter at 6490 Caballero Boulevard after the Bridges at Kraemer Place shelter in Anaheim which also is operated by Mercy House. At the same time, staff maintained they were not exclusively looking at hiring Mercy House.

Meanwhile, the nonprofit’s associate director, Patti Long, sat next to city officials and helped answer questions during two different public forums with residents, which were held over the course of the last few months to discuss the shelter.

Buena Park city staff estimate the Caballero Boulevard shelter will open by 2020. Mercy House operates three other emergency homeless shelters in the county, as well as two emergency shelter programs that run during the winter months at the National Guard armories in Fullerton and Santa Ana.

Buena Park Assistant City Manager Aaron France said after the meeting that two other groups applied to operate the shelter, responding to a request for bids the City Council sent out in April: Illumination Foundation, and the Salvation Army, which operates a shelter in Anaheim.

But a five-person committee comprised of public officials and experts on the county’s homelessness crisis — with no one present from Caballero Boulevard’s surrounding businesses or neighborhoods — scored Mercy House the highest of the three.

Anh was excluded from ranking the Mercy House bid because her organization, Korean Community Services, was listed in the proposal as a potential health services provider for the shelter, according to France.

Councilman Connor Traut, who abstained in an otherwise unanimous City Council approval of the Mercy House contract, pointed out an apparent lack of public input during the process. The final vote was 4-0.

“My opinion is, before voting on something of this magnitude, something like this should be going through public oversight,” Traut said before the vote.

City Manager Jim Vanderpool cited an “urgency to get the operator on board” as a reason the committee acted so fast.

“As much as we want to certainly include the public in the process in terms of how that shelter might operate to ensure safety for the community, and for the residents of the shelter itself, we had to get this operator onboard quickly,” he added.

The shelter, termed a “Navigation Center” by city staff, is part of an effort by the city to service a region of homeless people across 14 north county cities — a response to a federal lawsuit against the county and its cities over homeless policies during last year’s Santa Ana riverbed homeless camp evictions.

That lawsuit, filed by homeless attorneys Brook Weitzman and Carol Sobel and presided over by federal judge David O. Carter, has led to a string of new shelters coming online mostly in the north and central part of the county.

Weitzman and Sobel filed an additional lawsuit aimed at south county cities on May 24, after the City of San Clemente moved to relocate homeless people camped for months at a parking lot in North Beach to a city lot.

San Clemente officials contend the designated city lot will allow them to begin enforcing anti-camping ordinances again under criteria set by the 9th Circuit Court of Appeals, which ruled in September last year that that homeless people can’t be prosecuted if there aren’t enough shelter beds available.