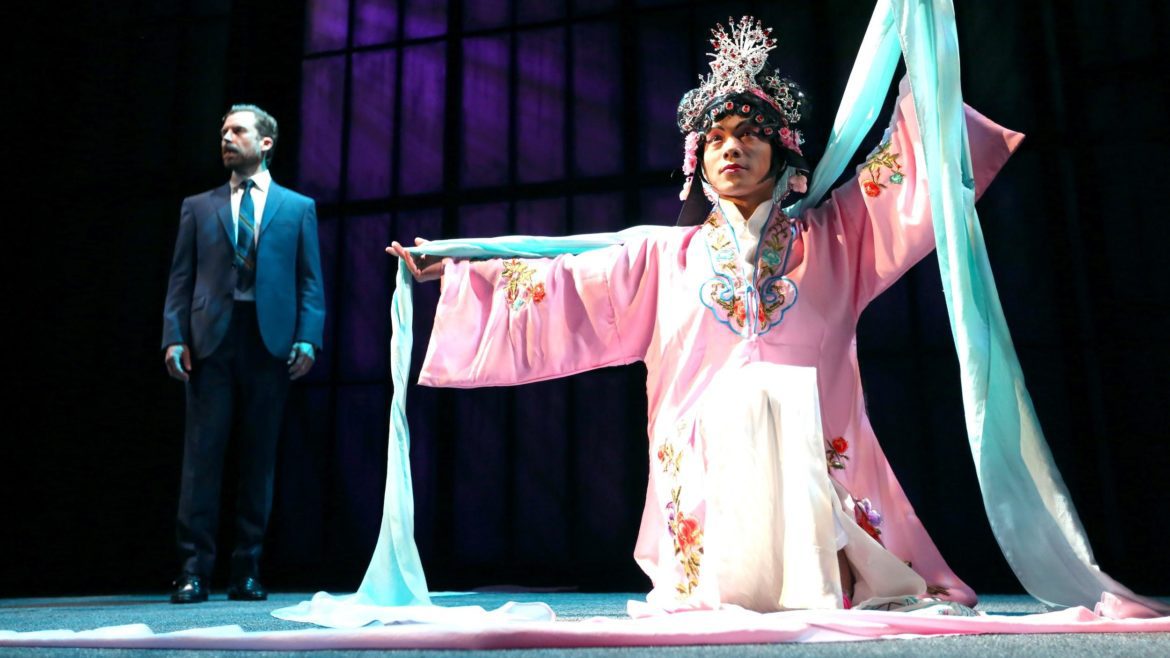 More than 35 years ago, a young playwright with loads of moxie but no track record drove down from his home in Los Angeles to visit Costa Mesa’s South Coast Repertory. Despite turning up in shorts and a T-shirt behind the wheel of a fancy German car, David Henry Hwang was given a new-play commission. But it took a while to complete.

Before finishing his commission, his play “M. Butterfly,” one of the iconic American plays of the 1980s, was produced by National Theatre in Washington D.C. It went on to run for two years on Broadway, winning the 1988 Tony Award for best play, was named a Pulitzer finalist for drama, and catapulted Hwang into the ranks of the great American playwrights.

He eventually completed his SCR commission in 1996 – “Golden Child,” which also went on to New York and enjoyed many other productions – but it took almost a decade.

It has taken far longer than that for SCR to present Hwang’s breakthrough play, but its production of “M. Butterfly,” which opened Friday on the Segerstrom Stage, was worth waiting for. Three decades after its creation, this strange, truth-based story about a French diplomat and his gender-bending Chinese lover has taken on new resonance in an era shaped by the Me Too movement, China’s geopolitical might and a more widespread understanding of gender identity issues.

The story requires such a huge suspension of disbelief that, were it not based on fact, it would be impossible to accept: despite a two-decade affair, Rene never realizes that Song, the love of his life, is actually a man. (The “How is that even possible?” questions I heard during intermission were hilarious.) Suffice to say that a combination of factors led to the successful subterfuge.

Rene is young, naïve, perpetually unlucky with women and completely ignorant of Chinese culture. When he first sees Song as a performer in a Chinese opera he’s instantly smitten, unaware that all the female roles are played by men.

Song is actually a spy for the Maoist government, and he is being pressured to find out all he can from Rene about French and American plans in China and Southeast Asia (much of the action takes place in the years leading up to the Vietnam War). Through a combination of clever manipulation and some strange anatomical tricks that I won’t go into here, Song manages to keep the deception going … and going.

Eventually, Rene is brought down by the affair, and the play is told (sometimes awkwardly) as a flashback full of pain and regret as he molders away in a French prison, guilty of treason for his unwitting assistance to the Chinese government.

Hwang retooled the script in small but important ways for “M. Butterfly’s” 2017 Broadway revival, and it’s debatable whether or not the changes have improved things. The courtroom scene has been given new, painfully detailed descriptions of how Song fooled Rene into thinking he was a she over all those years. It was better left to the imagination.

What hasn’t changed is how cleverly Hwang’s depiction of the relationship between Rene and Song is emblematic of East-West relations in general, marred by rivalry, distrust, misunderstandings and cultural gulfs that will never be bridged. Not surprisingly, Rene is as mistaken in his theories about Asia’s political future as he is about Song.

Hwang owes a debt to Puccini’s “Madame Butterfly” – the opera is referenced cleverly at crucial points, and the play’s final scene provides a nicely ironic twist on the original – and the connection is reinforced in a persuasive sound design by Andre J. Pluess. Ralph Funicello’s sets are a bit austere at times – there are too few clues to tell you whether you’re in a prison cell or an ambassador’s office.

But it’s the performances that make this production worthwhile. Besides the leads, there’s a great supporting cast: Aaron Blakely is a hoot as Rene’s boorish pal, Marc; Stephen Caffrey is wonderful as a two-faced ambassador; and Melody Butiu has some high-energy fun as a Cultural Revolution enforcer who enjoys her job way too much.