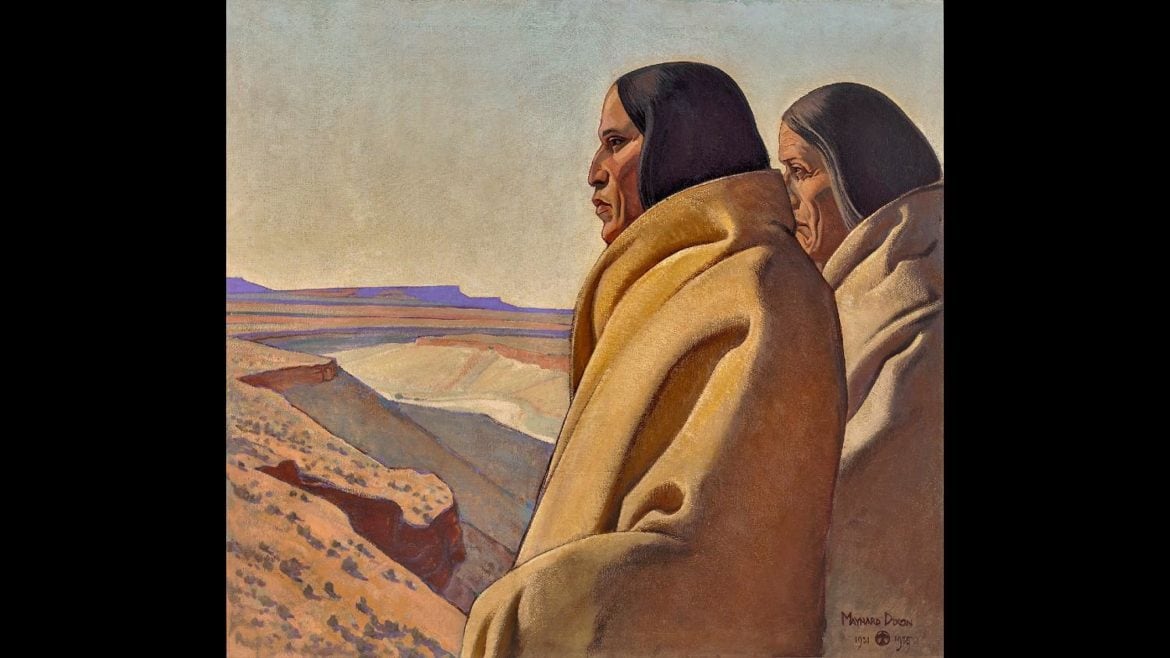 Maynard Dixon (1875-1946), “Men of the Red Earth,” 1931-1932, oil on canvas. Maynard Dixon had a long and successful career depicting scenes of the American West. This painting was selected by the Gardena High School graduating class of 1944.

Like most museum directors, Hilbert Museum’s Mary Platt knows what will be hanging in the galleries six months from now, 12 months hence and sometimes even two years in advance. That’s just how far forward museums set their exhibit schedules.

But last July, Platt got an email from Simon Chiu, and that changed everything.

Chiu explained that the foundation had painstakingly planned a centennial exhibition of the valuable collection of California Impressionist landscapes, portraits and modernist works. The show was supposed to open in March 2019 at the Pasadena Museum of California Art. But then came startlingly bad news: The Pasadena Museum was shutting down. 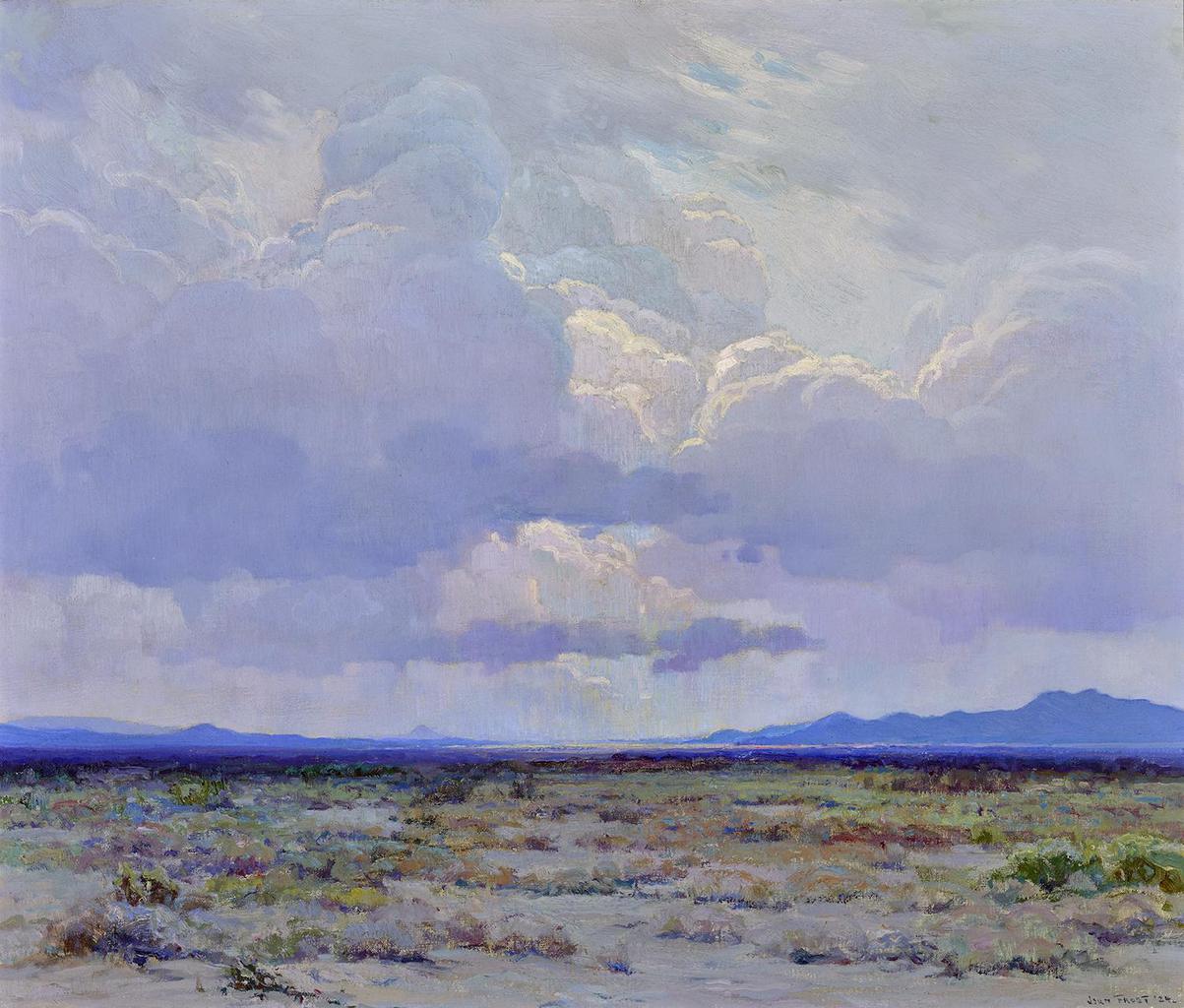 John Frost (1890-1937), “Desert Twilight.” Frost, a California impressionist, painted this oil on canvas in 1928, the same year it was gifted to Gardena High School.

The paintings in the Gardena collection were ready for display but had nowhere to go. Unless…might the Hilbert Museum be able to show them?

“They were left without a venue after all the planning that goes into it,” Platt said recently from the museum at Chapman University. But shifting her own schedule would be a “big ask,” Platt said. That is, until she saw the Gardena collection.

“I got a look at (the paintings) and I said to (founder) Mark Hilbert, ‘Oh, we have to have this.’ And he agreed. He saw immediately the impact of this collection and what they have. It’s just amazing that the students and their faculty advisors were picking these things.”

And so “Gifted: Collecting the Art of California at Gardena High School, 1919-1956,” found a new site for its anniversary exhibition (through Oct. 19). It features outstanding examples by master artists William Wendt, Maynard Dixon, Jessie Arms Botke, Jack Wilkinson Smith and others. The exhibit includes 68 works, now appraised to be worth millions of dollars; it is the first time in 65 years that this many have been shown together, said alumnus Bruce Dalrymple, board president of GHS Art Collection, Inc. 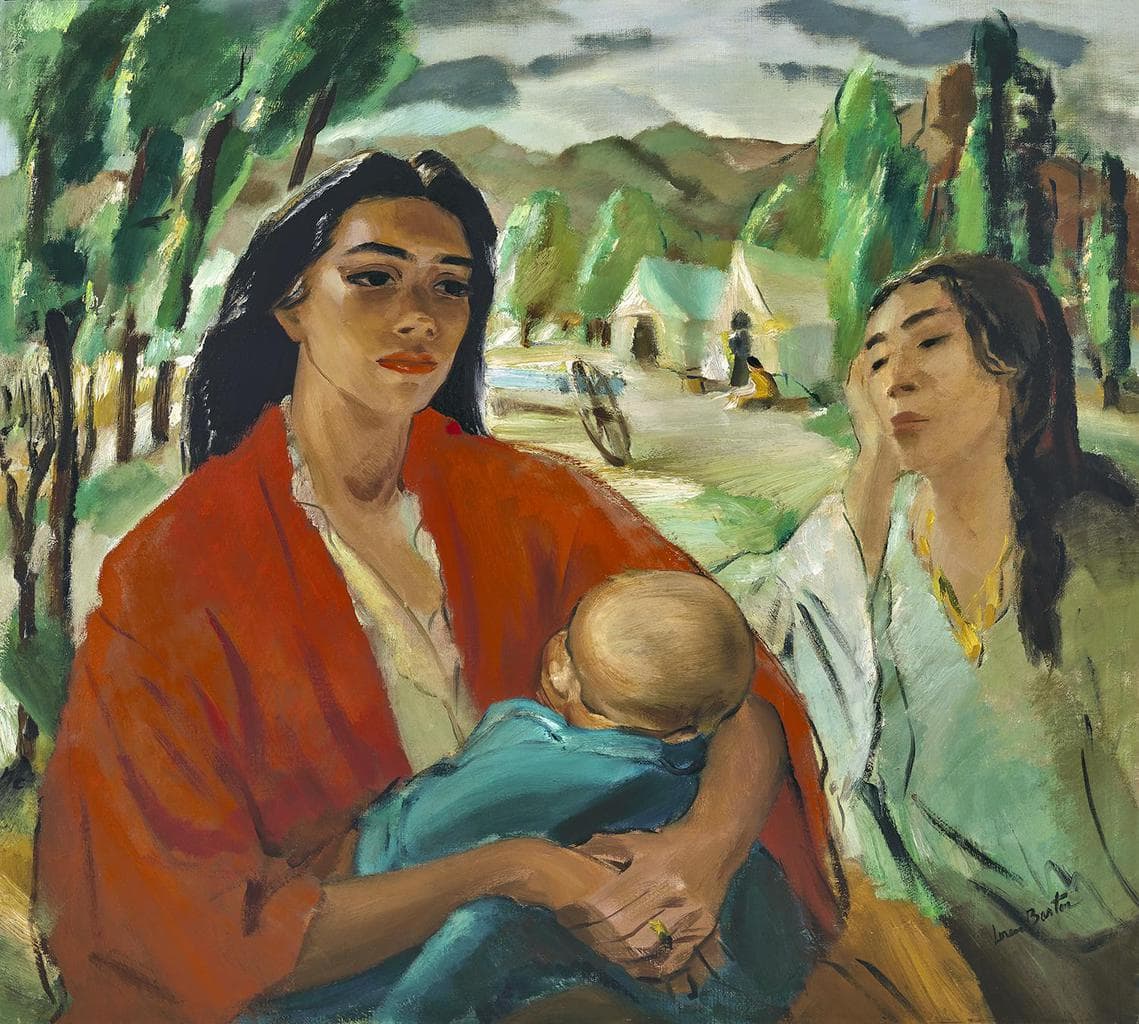 Platt and Hilbert agreed the show is complementary to the Hilbert’s own collection of California scene and representational artwork. And because most of the Hilbert’s exhibitions are drawn from the works philanthropists Mark and Janet Hilbert donated to create the museum, it was possible for the museum to postpone the exhibition that was originally planned.

While Gardena High School was not alone among high schools in collecting art, the high quality of its assemblage speaks to the enthusiasm and embrace of the program, not just by the students, but by the entire Gardena community, said Susan M. Anderson, the independent curator who organized the show and the 200-page catalogue that accompanies it. (Longtime residents might remember Anderson: She was a curator and acting director at Laguna Art Museum and still organizes shows in the county, including “California Bounty,” currently on display at the Bowers Museum.)

It was Gardena principal John Whitely who came up with the idea that the graduating class of 1919 should make a gift of contemporary art to the school. After a few years, the project became woven into the curriculum. Seniors took a required art appreciation class. Some were invited to visit Los Angeles galleries and artists, getting to know them, their styles and influences.

Beginning in 1928, the students planned an annual exhibition of as many as 150 paintings, from which the seniors selected the one that would be presented to the school. The artists often greatly reduced the prices of their paintings — the budget was $300 to $400 a painting, about $6,000 in today’s money, Anderson said — because they wanted to encourage the students and because the collection and show had become prestigious. The students raised money to buy the artwork by selling tickets to student performances and to an elaborate banquet that was held. 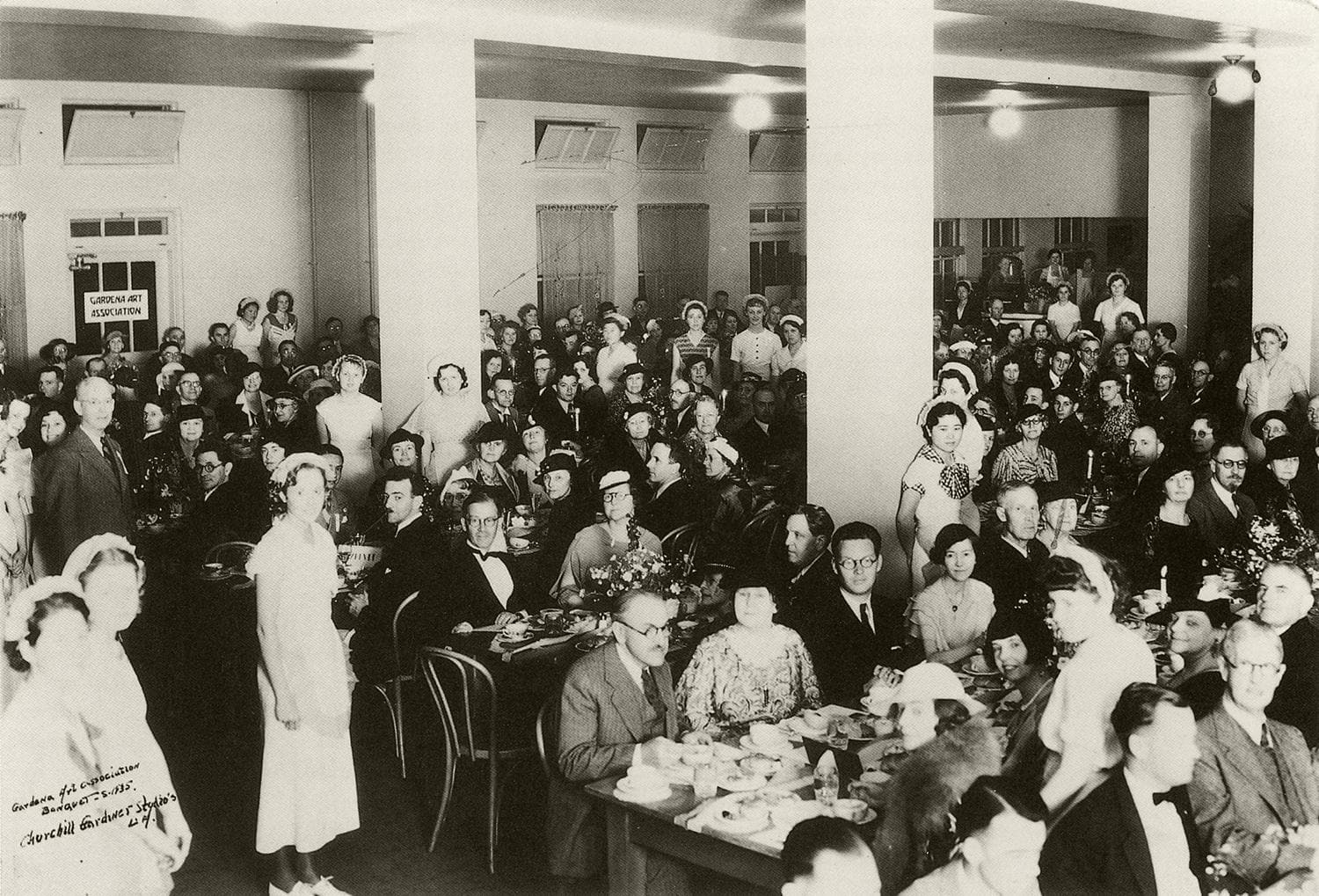 A photo from the 1935 banquet to raise money for the Gardena High School art collection. Tickets to the banquet were 50 cents each, though many attendees paid up to $1 each to help swell the coffers of the senior class so they could buy that year’s paintings.

“It took about 800 people to organize the exhibition and banquet. It helped them to understand the art and society in a bigger way. It was about engagement,” said Anderson, who noted that when the school was rebuilt in 1923, it was designed with the collection in mind.

“It was called the school with the art gallery.”

Paintings were hung in the school auditorium and the library, and eventually the walls were filled all the way to the ceilings. The students initially selected California Impressionist paintings and they had an ongoing relationship with the members of the more stylistically conservative California Art Club. As the years passed and art styles changed, the works in the collection changed, too. Anderson pointed to John Hubbard Rich’s 1922 “The Brass Bowl,” saying it is “a perfect combination of impressionism and modernism.” The painting had been displayed at a significant exhibition in Los Angeles, and Anderson said she thinks the seniors took details like that into account, as well. 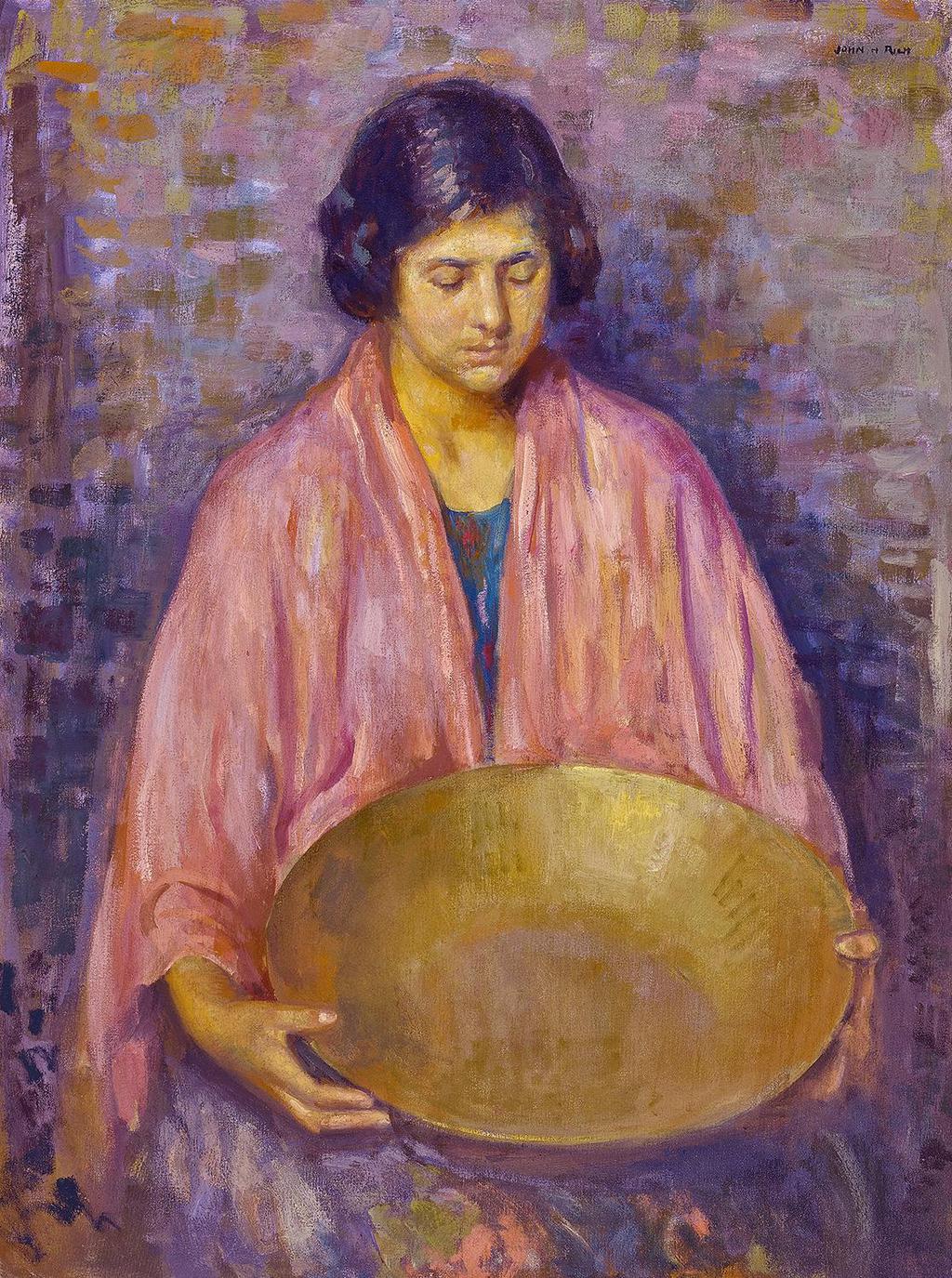 John Hubbard Rich (1876-1954), “The Brass Bowl,” 1922, oil on canvas. Rich was a member of the “Group of Eight,” a Los Angeles modernist artists’ group that focused on creative experimentation and individual expression. This painting had been exhibited in an important show by the group in Los Angeles. It was selected for the Gardena High School collection in 1924.

“Was there something important about the work? I think they also cared about those sort of things,” she said.

As the decades passed, school administrators changed and the paintings, which had skyrocketed in value, were kept in storage. In 1956, the gifting program ceased, and the collection was forgotten, said the foundation’s Dalrymple.

“Over the years, the paintings were stored in a vault at the high school,” said Dalrymple, a 1961 alumna. “There were insects, it wasn’t temperature controlled. It was sort of hidden away and forgotten. If you ask many students, a lot of them have never heard of the collection.”

In the late 1990s, a few alumni began organizing to save the artwork. With funding, they started restoring damaged pieces and cataloguing every piece. About 10 years ago, a small group of alumni set up the nonprofit foundation to care for the collection in perpetuity. 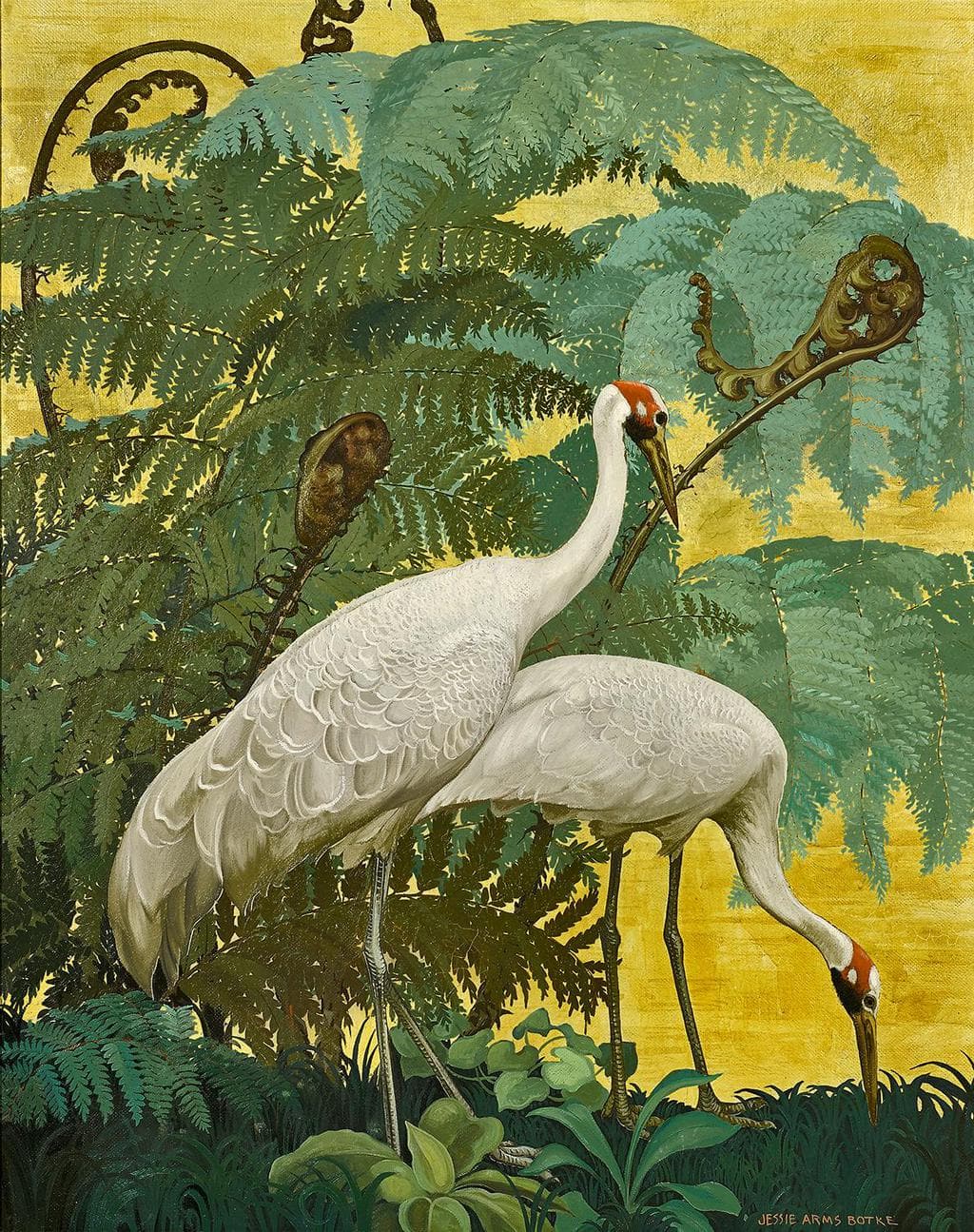 Jessie Arms Botke, “Cranes Under a Giant Fern,” c. 1943, oil and gold leaf on canvas, 40 x 32 inches. Botke was renowned for her stylized images of exotic birds and her use of gold leaf. The students may have selected this painting to gift to the high school because it is highly influenced by historical Japanese screen paintings. By 1943, nearly a third of the Gardena HS student body, the sons and daughters of local Japanese-American farmers, had been removed to U.S. internment camps. Selection of this painting may have been the remaining students’ way of paying tribute to the friends they missed, according to exhibition curator Susan M. Anderson. The painting was selected by the class of 1943.

Ninety-four-year old Roy Pursche, a graduate from 1943, recalled how the school’s beloved art teacher, Adele Lawrence, selected him and two other students for a drive to Pasadena to visit artists and see their work. The entire experience instilled in him an appreciation and love for art that Pursche, who still works on the family farm, said he’s not sure he would have developed on his own.

Over the years he “wound up buying a couple of paintings at art exhibits around Southern California,” he said. “I wouldn’t have done it without the education I got at Gardena High School.”

Laura Bleiberg is a contributing writer for Arts & Culture at Voice of OC. She can be reached at [email protected].