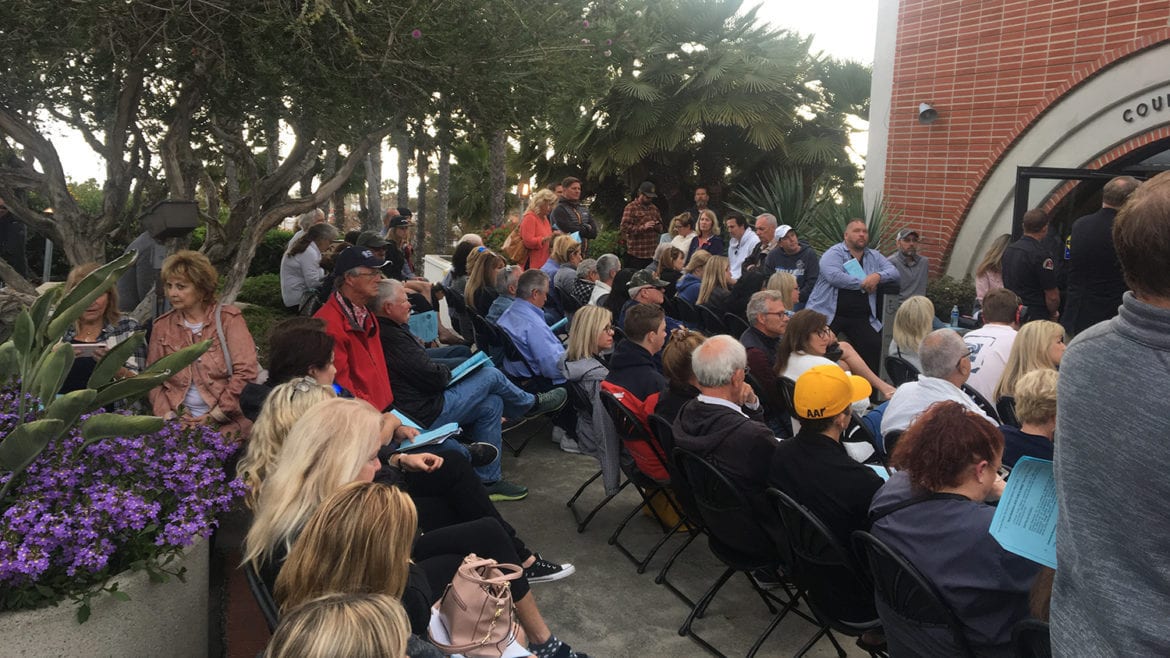 The San Clemente City Council meeting on May 21, 2019 was so well-attended that overflow seating was added outside.

Homeless people in San Clemente will be moved to a roughly half-acre city maintenance yard Friday after the City Council unanimously voted on an urgency ordinance banning sleeping on public property, but attorney Carol Sobel warned the camp is unconstitutional.

She also said the city mischaracterized a 9th Circuit Court of Appeals ruling.

The court ruled in September that homeless people can’t be prosecuted if there aren’t enough shelter beds available.

“That is, as long as there is no option of sleeping indoors, the government cannot criminalize indigent, homeless people for sleeping outdoors, on public property, on the false premise they had a choice in the matter,” reads the unanimous ruling by the three justices in Martin v. City of Boise.

Sobel’s letter claims the city left out the word “indoors.”

“The City’s representation of the Martin decision, omitting the key word ‘indoors,’ is fatal to the rationale for the urgency ordinance. The City may not avoid the requirement of an adequate indoor shelter. If the City enforces its urgent ordinance, it will violate the Eighth Amendment (cruel and unusual punishment) under Martin,” reads the letter. 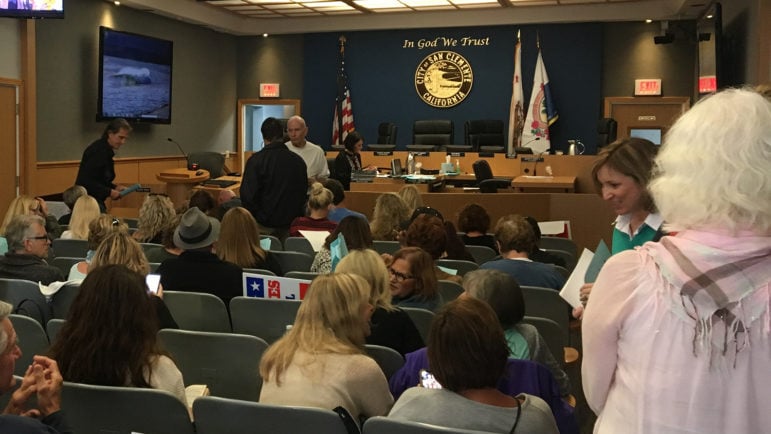 The City Council also unanimously voted Tuesday to table a proposed homeless shelter because Councilmembers said the estimated $2 million annual cost to run it is too expensive.

Sobel, along with attorney Brooke Weitzman, sued Anaheim, Orange, Costa Mesa and the County over their homeless policies last year during the Santa Ana riverbed homeless camp evictions, which led to a string of new shelters mostly in the north and central part of the county. Weitzman also signed Sobel’s letter.

San Clemente is home to 145 homeless people and nearly 100 of them sleep outside, according to the 2019 Point in Time Count, a federally mandated biennial homeless population headcount

During the City Council’s Tuesday meeting, Councilman Dan Bane said the 9th Circuit’s decision allows the city to move the homeless people to the city-owned lot on Avenida Pico.

“We’re not telling folks, with our urgency ordinance, that they can’t be anywhere in our city,” Bane said. “In fact we are designating a space for them that’s going to be closed off, going to provide bathrooms…”

During public comment, many residents expressed their frustrations with the homeless people camping in north beach and cited dirty bathrooms, drug use and a rat infestation because of their presence.

One resident also said the volunteer groups who feed the homeless should be responsible for some of the clean up.

Smith, the city attorney, wanted to clarify the camp wasn’t a decision based on homeless people’s drug use or other disabilities.

“I wanted to make sure, just for the record, that it’s very clear to the Council and to the audience that the Council’s decision tonight is not based on the disability, including the addictions, of the people referenced … that we are not doing this in reaction to people’s disabilities,” Smith said.

According to the staff report and residents during public comment, the homeless people have been creating unsanitary conditions, destroying the landscaping and driving people away from the area.

Councilwoman Laura Ferguson said homeless people from other cities will not be brought to the camp.

City Manager James Makshanoff said there will be some rules instituted at the camp, along some security guards.

“We can enforce our standard municipal codes on the site,” Makshanoff said, adding the city can create more rules. “No propane tanks, no campfires, and so forth and so on. So that’s our plan is to designate some house rules for the site.”

In her letter, Sobel lambasted the location and set up of the camp.

“Unsheltered individuals are not criminals. The City is not even willing to provide basic shelters for individuals at this location,” Sobel stated, adding there’s no shade provided and people will overheat in the coming summer months. “In a word, it is inhumane and cannot be the basis for enforcement and jailing people who do not move to this location.”

The letter also alleges the camp is a violation of the Fourth Amendment.

“Requiring unsheltered individuals to stay in a fenced area with security around them would, in our view, be an unlawful seizure and a violation of the Fourth Amendment,” reads Sobel’s letter.