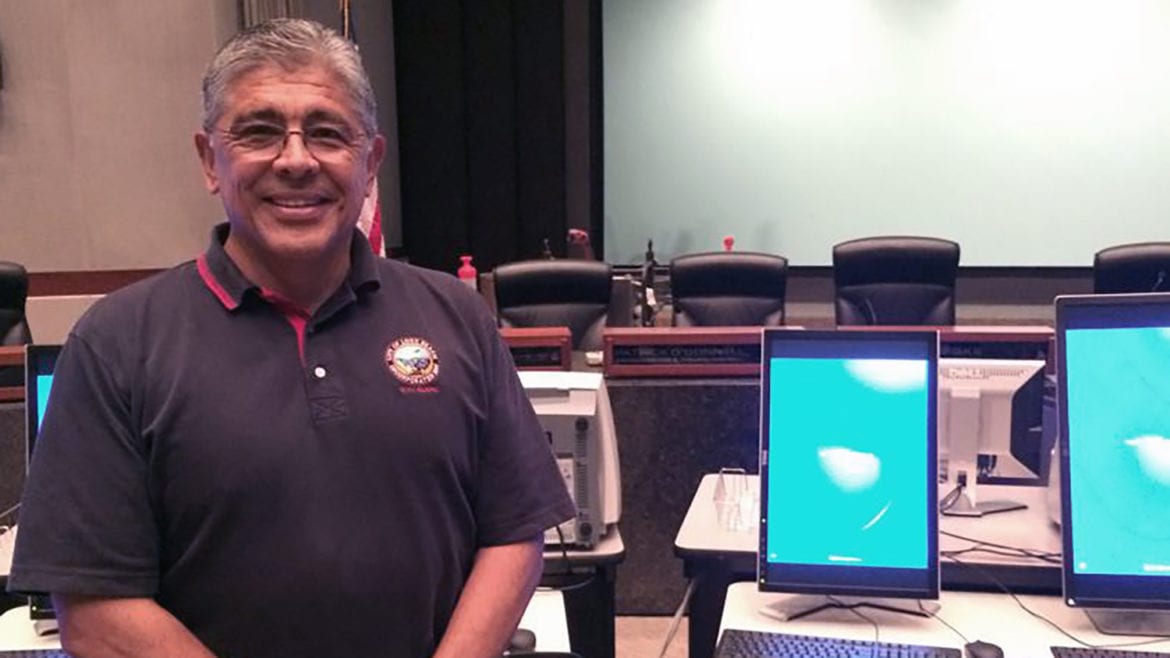 Larry Hererra-Cabrera, who was Long Beach city clerk from 2002 to 2015, oversaw vote-counting in the city's April 2014 local election.

Larry Herrera-Cabrera was hired in February to provide Santa Ana city clerk staff with “training, development, and leadership in managing legislative, public records and election services,” among other duties, according to his contract, with now runs for one year.

Cabrera reportedly was involved in a disputed decision to reject recall paperwork against two City Council members. His hiring, and his later contract expansion to $50,000, were not announced by the city or placed on a public City Council agenda.

Asked why the city did not publicly announce or disclose Cabrera’s hiring, a spokeswoman emphasized they were following their normal practice with consultants.

“Larry is a consultant. He’s helping us with some internal projects,” said Daisy Perez, the city’s spokeswoman.

“We have several consultants that are brought on at the city manager’s signing authority [in which] no announcements are made. So we just followed the same process,” Perez added.

She emphasized Cabrera is not the interim city clerk, and that his primary job is to help with “new technology and improved efficiencies.”

The contract suggests his work goes much further, including training and leadership on public records and elections.

The contract says Cabrera’s duties include updating the city’s election procedures, recommending changes to how public records requests are processed, and training staff on how to handle campaign finance disclosures.

Santa Ana officials hired Cabrera to “facilitate and maintain the expertise and professional development” of the clerk staff and enhance “subject matter knowledge and leadership,” according to the contract. Five months after Huizar’s departure, the clerk’s office is still without a permanent replacement for its leader.

Among other duties, the City Clerk’s Office has a role in deciding if city candidates, recalls and voter initiatives meet legal requirements to make it onto the ballot. Cabrera reportedly was involved in such a decision.

In an email to the city, one of the recall organizers said Cabrera was the person who received and rejected the recall paperwork on behalf of the City Clerk’s Office in late April, citing a non-existent “Santa Ana Elections Code” in saying the person dropping off the paperwork must live in Santa Ana.

The recall proponents and their lawyer, Mark Rosen, challenged that decision as unlawful, saying the state laws governing city recalls don’t have that residency requirement. City officials have stood by their decision, saying they correctly applied the state Elections Code, and have declined to say if Cabrera was involved.

The initial $25,000 amount for Cabrera’s contract was the maximum amount the city manager could authorize without putting it on the City Council agenda. The city law setting that $25,000 threshold had been in place for more than 10 years.

In March, the month after hiring Cabrera, the City Council boosted staff’s contracting authority to $50,000. The next month, Cabrera’s contract was increased to $50,000 – the exact new dollar amount where it wouldn’t have to appear on the public agenda.

Cabrera’s hiring stemmed from the early 2019 departure of Huizar, who had served as Santa Ana’s city clerk since 2009, according to the contract.

Huizar announced her resignation from Santa Ana on Jan. 8, to take affect about two weeks later on Jan. 21, and moved to the same position at Lake Forest City Hall.

“Based upon the text messages between HUIZAR and REYNA there is probable cause to believe HUIZAR was aware REYNA was not residing in the Ward he was seeking election and assisted him in obtaining documentation to prove residency,” states a sworn DA statement in a search warrant application.

The cell phone evidence of Huizar’s communications with Reyna “is relevant to correlate with criminal conspiracy,” the application added.

The DA’s filing does not specify whether they allege Huizar or someone else was part of a possible conspiracy, and a DA spokeswoman said the office declined to comment on the investigation. No charges are known to have been filed in the Reyna probe.

In a phone interview last week, Huizar said she performed standard clerk duties in answering Reyna’s questions about documents the way any clerk should, and that she has cooperated with the DA’s inquiry into Reyna’s filings.

“I feel that as a city clerk I have a ministerial responsibility to process the documents presented before me. I don’t have investigatory rights or authority, so I would not be the one to investigate a situation,” Huizar said.

“My duty as a city clerk is to process documents presented and signed under penalty of perjury by the resident.”

Under state law, she said, clerks must accept the documents if, on their face, they meet legal requirements. Challenges to candidates’ eligibility is handled by residents filing a court case, Huizar said.

“It’s through the courts, and it’s not through the clerk,” she said. Nowhere in state law does it say a “city clerk has an investigatory duty…to check  these documents,” she said. “That is not our role.”

Regarding her communications with Reyna last year, Huizar said she was answering his question about what documents he needed to produce, and that it was common in Santa Ana for residents to move from one address to another.

DA officials interviewed Huizar one time “and I provided the information as best I knew,” she said. “I stand by my work and my ethics.”

During a February interview with DA investigators, Reyna admitted to backdating the rental agreement he submitted as evidence of his residency, according to the DA’s search warrant application.

Reyna didn’t return a phone message seeking comment. He won the election and took office in December, but stepped down March 1 as part of a settlement deal to avoid a civil trial on residency fraud brought by his election opponent.

Huizar has been favored to be brought back as Santa Ana’s city clerk by at least one City Council member. The council has been holding closed session discussions in recent weeks on who to choose as permanent city clerk.