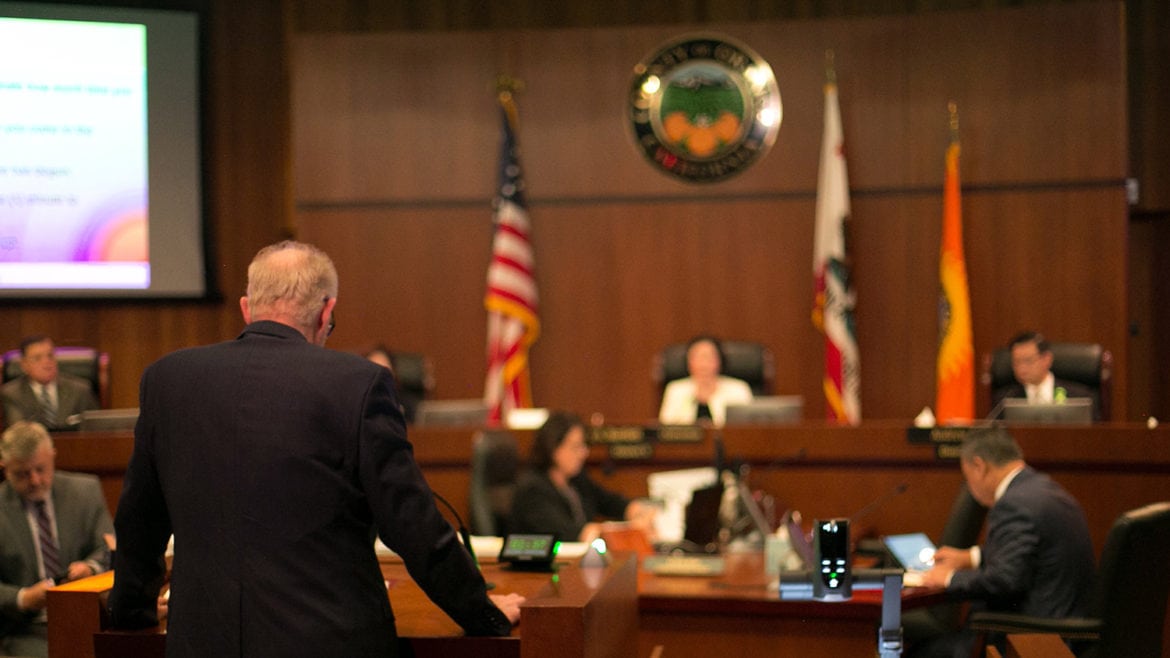 A resident speaks during public comment at the May 7, 2019 Orange County Board of Supervisors meeting.

Orange County supervisors are moving to add $65 million per year in taxpayer money they control to the Sheriff’s Department, as a supervisor questions disparities between DA and public defender funding and advocates call on supervisors to fund homeless housing.

It all played out at the annual county budget hearing last week, where supervisors gave their support to the $65 million annual sheriff increase out of the discretionary funds they control, mostly from property taxes. The final budget is up for approval next Tuesday.

The $65 million sheriff expansion does not add deputies or other staff, but rather is for keeping the current service levels provided by the Sheriff’s Department, officials said. Compensation for sheriff staff has grown by tens of millions of dollars per year under a 2016 labor contract supervisors approved.

Over the five fiscal years ending in June 2016, county supervisors cut about $39 million in annual funding they control from the county Health Care Agency, which includes mental health services, while at the same time adding $59 million to the Sheriff’s Department’s annual budget.

The sheriff’s deputies’ union, the Association of Orange County Deputy Sheriffs, is the largest funder of county election campaigns.

The 36 public comments at the June 11 budget hearing were dominated by residents calling on supervisors to fund homeless housing with some of the $900 million in annual discretionary money the supervisors control.

They cited a 2017 UC Irvine study that found it costs taxpayers $50,000 total when long-term homeless people are permanently housed with on-site health services, and $100,000 to leave them on the streets. The cost difference is mostly due to the higher costs for emergency room visits when medical issues go untreated on the streets, the researchers found.

“You are not ending homelessness by warehousing people [in shelters],” said Patrick Hogan, who lived at the former Santa Ana riverbed encampment.

“You call the shelters ‘bridge housing,’ but without more permanent supportive housing they are a bridge to nowhere.”

In total, 33 speakers called for supervisors to fund homeless housing with discretionary money and address the overall housing affordability crisis.

Later in the day, the supervisors voted to change the proposed budget and earmark $5 million for homeless housing through the soon-to-be-formed Orange County Housing Finance Trust.

That allocation would become final if supervisors approve it next week as part of the county budget, and the housing trust has its first scheduled board meeting two days later, on Thursday, June 27. Under the supervisors’ plan, the county wouldn’t send any of the $5 million to the trust unless supervisors approve of the specific project it would go toward.

Some of the county’s budget priorities drew questions from Supervisor Andrew Do, who wondered about disparities between the District Attorney’s Office budget and the Public Defender’s Office, which defends clients on most of the DA’s cases.

The proposed budget called for a $14 million cost expansion for the DA and $3 million for public defenders. Most of the expansion – $13 million and $2.3 million, respectively – is for maintaining existing service levels by covering salary and benefit growth.

Do wondered why the budget called for an extra four DA jobs for reviewing convictions that have been contested, and “only one” extra job for it at the public defender’s office.

“The recommendations were based on the needs expressed by the departments, the workloads that were communicated,” said Kim Engelby, a county budget official, in response.

“Do you know that, they work on the same number of cases, by definition, right?” said Do, who worked as a DA prosecutor and a public defender in the 1990s.

He called the top public defender, Sharon Petrosino, up to the speaker’s podium and prompted her with a statement: “Realistically, the bulk of the work in challenging a conviction –”

“Comes from our department,” Petrosino said.

“Thank you,” Do replied. “Having been in your office, I know that work. So, it seems kind of backward to me.”

But Shawn Nelson, a former OC supervisor who is now the No. 2 official at the DA’s office, told his former colleagues the post-conviction workload is “inordinately on the prosecution’s side.”

“When that [post-conviction review request] comes to our office…that file has to be drawn in from storage, and the dozens of boxes have to either be taken from Deputy District Attorney Do…or it’s someone experienced enough to take something raw that they didn’t work on,” Nelson said.

“And now you have to go through and find all of the issues, dig through informants that were not used…so you have all of this volume of information.”

Do and Supervisor Doug Chaffee proposed adding one extra attorney and one paralegal to the Public Defender’s Office, for a total cost of about $200,000, which the supervisors approved.

The proposed county budget calls for $6.8 billion in total spending for the 2019-20 fiscal year, which starts July 1.

Most of the county’s funding is restricted to particular uses, like food stamps, child protective services and jail construction grants.

One of the continuing challenges facing the county is costs growing faster than revenues, most prominently with the Sheriff’s Department.

Much of the cost increase stems from $62.5 million in sheriff’s deputy raises supervisors approved in September 2016.

The Sheriff’s Department was on track to overrun its budget last year by $33 million, about $30 million of which was salaries and benefits.

Last year, the deputies’ union spent $650,000 on ads and other support for Sheriff Don Barnes, $150,000 opposing Supervisor Doug Chaffee’s opponent Joe Kerr, and $370,000 supporting then-DA Tony Rackauckas, who was endorsed by a majority of the current supervisors.

In the run-up to Do’s tight 2016 re-election, the deputies’ union funded $10,000 in ads attacking him ahead of the June primary election. After Do voted for the deputy raises that September, the union spent $100,000 on mailers supporting Do ahead of the November general election, and he won by 0.4 percent of the vote.

The pre-raise compensation was more than in neighboring San Diego County, which has the most similar population size to Orange County of all counties in the state.

In 2015, the median total compensation for San Diego County sheriff’s deputies was $134,000, compared to about $194,000 for Orange County, according to the counties’ data posted by Transparent California.

Within the overall budget, supervisors have direct control over how to spend roughly $900 million per year, which is where most of the focus lies in the budget process. OC officials call this unrestricted money “discretionary funds,” “general purpose revenue,” and “net county cost.”

The new budget includes $20 million to upgrade voting equipment as part of the new “vote center” model taking effect next year. The budget also calls for expanding health care services in jails with an extra $17 million per year to hire nurses, doctors, psychiatrists, and other medical staff.

And a milestone for the county’s financial stability will be reached when the current fiscal year ends June 30, officials said.

For the first time in many years, the county will meet its reserve target of two months of operating expenses, or $509 million, officials said. During economic downturns, governments dip into reserves to keep core services running until tax revenues pick back up.

The Orange County Housing Finance Trust, for which supervisors authorized $5 million, for, was authorized unanimously by the state Legislature last year and is supposed to bring cities and the county together to coordinate the financing of 2,700 homes – mostly apartments – for homeless people with on-site health services.

The housing trust’s first board meeting is scheduled for Thursday, June 27 at 9:30 a.m. at the county’s headquarters in Santa Ana, in the hearing room next to the Board of Supervisors’ meeting chambers.