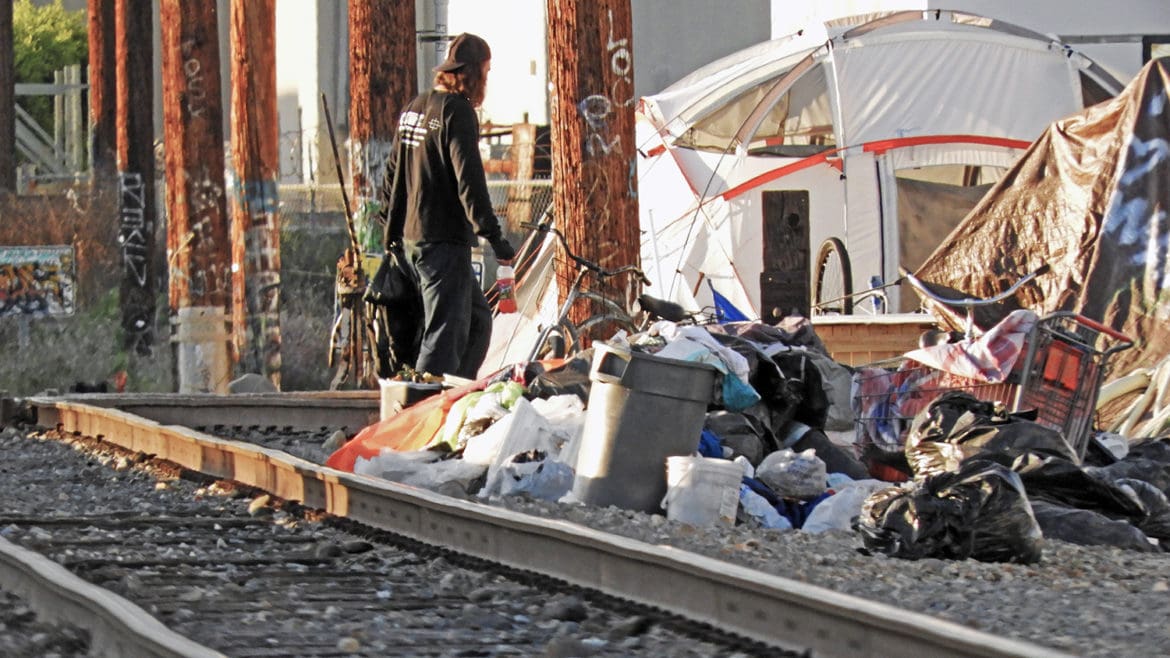 A homeless camp on the Union Pacific railroad in near Cerritos Avenue and Anaheim Boulevard in Anaheim on April 10, 2019.

New homeless shelters in Fullerton could be opening soon after the City Council voted to declare a shelter crisis in the city to ease building laws that would hamper shelter construction.

“I think we need to move forward with this. I’m done waiting. I’ve watched this Council for the past eight years do nothing and we are now on this Council and we’ll do something,” Councilman Ahmad Zahra said.

The Council voted 3-1 to declare the crisis July 2 in the packed meeting chambers, with Councilman Bruce Whitaker dissenting and Councilwoman Jennifer Fitzgerald absent.

“Law drafted in the heat of the moment is seldom wise and often causes collateral damage,” Whitaker said. “Tonight we heard free up some land and basically impose upon certain neighborhoods our will to get something done, as I keep hearing getting said. So that gets away from our normal process of people’s due process to come and speak against land use.”

According to the staff report, Fullerton’s crisis declaration should ease building regulations on the city so it can build shelters faster.

“After declaring a shelter crisis, a political subdivision … can obtain immunity from liability for ordinary negligence in the provision of emergency housing pursuant to [state law],” reads the report.

“The provisions of any state or local regulatory statute, regulation, or ordinance prescribing standards of housing, health, or safety shall be suspended to the extent that strict compliance would in any way prevent, hinder, or delay the mitigation of the effects of the shelter crisis,” reads the law.

The law also allows cities to adopt ordinances that will be “consistent with ensuring minimal public health and safety” during the shelter crisis.

“This section does not limit liability for grossly negligent, reckless, or intentional conduct which causes injury,” reads the law.

According to the federally mandated Point in Time Count, a biennial head count of the homeless population conducted in January, there were 308 people sleeping outside in Fullerton at the time.

During the meeting, City Manager Ken Domer said in prior years cities needed to declare a shelter crisis to qualify for money from the state’s Homeless Emergency Aid Program (HEAP),  as was required during the 2018-2019 budget cycle.

“This is one of the cons of writing something when things are constantly changing up at the State,” Domer told the Council.

He also warned the Council against using the relaxed regulations from the crisis declaration on permanent structures because it was designed for temporary shelters while cities look for permanent locations.

“So, if you need to convert a public facility — a warehouse, a gym — into a shelter, and they didn’t have the bathrooms and some other requirements, if you declared a shelter crisis, you could basically waive that shelter requirement during the crisis,” Domer said.

“I don’t know if it’s the best use of a shelter crisis for a permanent (building) because if we’re going to move people into a permanent structure, we want to make sure all those building codes, health and safety items are accounted for.”

Mayor Jesus Silva said although the crisis declaration isn’t needed for homeless aid funding, it can help them put up a temporary shelter faster.

“I’m still thinking of doing so, just because we are working with a nonprofit to locate a temporary shelter right now … If we do find one (a building), we want to get it up tomorrow,” Silva said. “Part of declaring a shelter crisis is we’re able to open it up and get people in there right away.”

Silva also said the crisis declaration doesn’t mean the state will mandate shelter locations because Fullerton will keep its ability to decide where shelters are built.

But Whitaker said the shelter crisis declaration will unfairly target the southwest District 4. Although Whitaker lives in the District, he’s an at-large member because he was elected by the old system rather than the new district election system that began in the 2018 November election.

“I’m mentioning this because it seems like some of the possible sites here have already been selected … It’s interesting to me that most people who are very strong advocates for these facilities aren’t interested in locating them in their own districts. It seems that District 4 has been singled out,” Whitaker said.

Silva said the Council hasn’t made any progress on opening a shelter for too long.

“Yeah, I guess I disagree on this one. It seems we just wait and wait and wait,” Silva said. “There was never any support to address [the] issue ahead of time … I don’t want to put this off anymore.”

“This is the time I think we need to take a step and send a message,” he said.

Zahra said there should be alternatives proposed if the crisis declaration was shot down.

“Are we only just going to oppose things without offering alternatives?” Zahra said.

Father Dennis Kriz, of St. Phillip Benizi church in Fullerton, helped organize at least 60 people — all dressed in white — to attend the meeting and advocate for the crisis declaration. Kriz helped organize with other local religious leaders in the area.

“I can definitely give you the human story of this. Four different times during the past year and a half, people have dropped to their knees asking for help saying they have no place to go,” Kriz told the Council. “I made three separate lists of the homeless that were sleeping on our grounds. By the second time, I said I’d never want to do that again. I felt like Schindler.”

He added, “Yes, it is incredibly annoying to the neighbors and to parishioners and so forth, but we’re dealing with human lives.”

Kriz also said he would help the Fullerton Police Department and social workers clear homeless encampment outside the St. Phillip Benizi church on Gilbert Avenue and Valencia Drive in the southwest part of the city.

He said many will take shelter if beds were available.

“Because most of them would go if they had a place to go,” Kriz said.