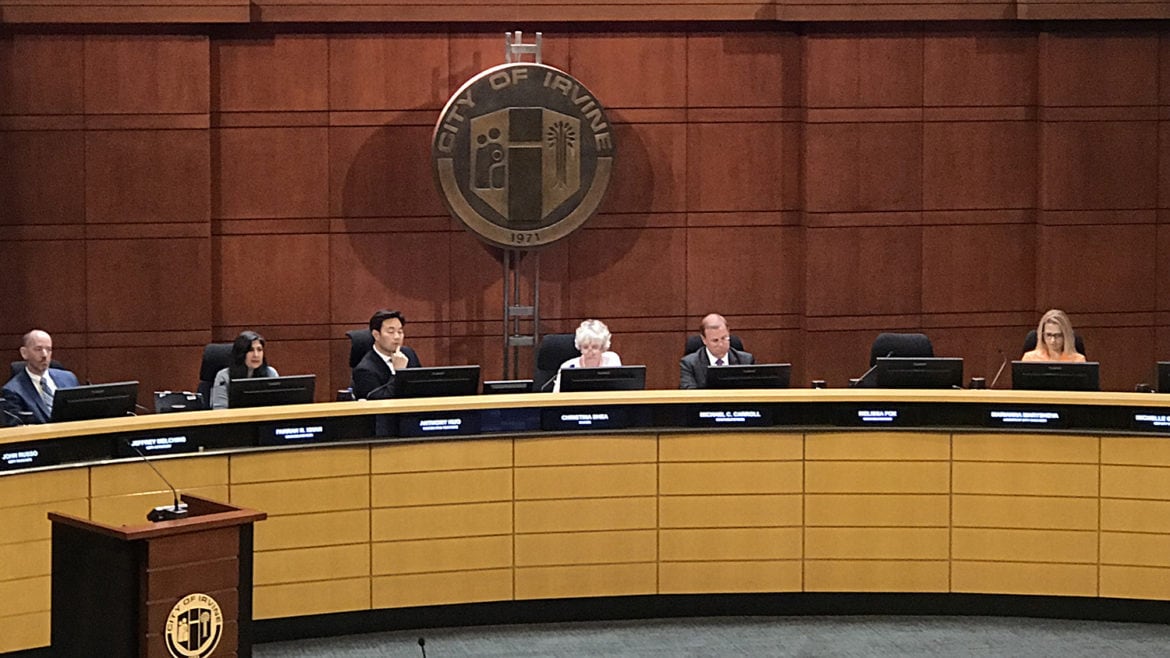 The Irvine City Council, joining at least six other Orange County cities, has adopted a controversial temporary policy that potentially shuts some council members out of holding public discussions on issues that others on the dais don’t want.

Mayor Christina Shea under the new Irvine policy can still place an item on the agenda without the consent of anyone else on the dais.

Irvine Councilmembers argued at Tuesday’s meeting the policy would be a future safeguard against recent “divisive” actions by fellow Councilwoman Melissa Fox, who was absent from the meeting but has recently pushed for discussions about controversial issues.

“I don’t want this to be an attack on her,” said Councilman Anthony Kuo, who proceeded to call Fox “irresponsible” for bringing up agenda items that he said wouldn’t see support from another council member.

“She has twice now sat at this dais and turned to us … and said ‘I reached out to my council colleagues and agreed to work with them’” on the issues she wanted discussed, Kuo added. “And on at least two occasions when she said that, I sat here and went ‘you never reached out, you never talked to me.’”

Fox, who’s currently in Alaska, disputed council members’ claims about her in a Wednesday phone interview.

“We have had a long history where the majority has got to control and direct the entirety of the council by not allowing the rest of the council members to have a voice,” she said. “But never before have they gone this far.”

Council members passed the policy unanimously. Fox accused council members of using her absence — which was known about before the meeting — to try and pass the ordinance without any trouble or resistance.

But the large public protest at the meeting pushed Councilwoman Farrah Khan — a supporter of the proposed policy — to amend the ordinance at the last-minute to make it temporary. Her motion was supported by other council members.

More than a dozen public speakers opposed the agenda-setting rule.

The policy will come back to the Council sometime around January 2021, after the November 2020 election, at which point they will consider whether they want to keep it.

Council members supporting the policy listed some of the six other cities in Orange County with the agenda rule.

In Anaheim, Mayor Harry Sidhu’s agenda-setting rule, requiring two other council members’ approval before putting an item on the agenda, was criticized for silencing the council minority.

In Westminster, the City Council’s agenda-setting rule goes further — an item can only be placed on the agenda if it has the dais’ majority approval.

The Westminster policy was criticized by the minority faction on the dais, which said the rule would consolidate a “dictatorship” at City Hall amid months of public fighting on the council.

Shea before her council’s vote cited a “propensity” during campaign seasons “for certain council members to be bringing forward certain issues to promote themselves in an election cycle.”

From the audience before the vote, Irvine resident Joe McLaughlin laughed at Shea’s analysis and shouted that Councilman Mike Carroll, who introduced the agenda-setting policy, was up for reelection himself.

Carroll was controversially appointed to the Council in May — despite calls by residents for a special election — after former Mayor Don Wagner was elected to the county Board of Supervisors and Shea left her council seat to succeed Wagner as Mayor.

“Please don’t laugh,” Shea said to McLaughlin from the dais.

Khan rejected some public commenters’ description of the policy as a “power-grab,” and joined fellow council members in calling out Fox.

“A colleague placed something on the agenda knowing it’s going to fail, and it throws our community under the bus,” Khan said before the vote.

In early June, Fox pushed for public discussions on flying the Pride Flag at City Hall to show solidarity with the city’s LGBTQ community.

The council struck down her proposal at a June 11 meeting, opting instead to allow council members to fly flags of their choice at their own offices. Carroll during that meeting accused Fox of trying to divide the dais with her proposal.

“I was offended by Mike,” Fox said, calling his claim “unbelievable.”

And at the Council’s June 25 meeting, Fox placed a proposal on the agenda to designate a state-run Veteran’s Cemetery site at the old El Toro Marine Corps Air Station, which has been opposed by developer Fivepoint Holdings.

The City Council has long grappled with where the cemetery should go in Irvine — with Shea and Fivepoint CEO Emile Haddad pushing for a site at a would-be golf course instead.

Fox’s item was pushed back to a July 23 meeting, where the City Council will discuss both considered sites and potentially designate one.

Numerous public speakers accused the council under the new policy of encouraging favor-trading and backroom deals, arguing council members could potentially violate the state’s open meeting law by setting the agenda and getting items approved with each other behind closed doors.

Irvine resident Susan Sayre said the rule “would increase the power and authority of the mayor” in a city where the mayor plays a ceremonial role and has authority equal to the other council members.

“Every member of the city council represents the same citywide constituency,” said Chapman Professor Kenneth Stahl, who added the policy would “increase secrecy” in the city’s dealings.

Stahl also brought up the question of whether the policy could set up council members to violate the Ralph M. Brown Act public meetings law, if more than two council members deliberate on whether to place an item on the agenda.

“Essentially what would happen is, if you’re unsuccessful in getting one city council member to join your motion, you’re out of luck because you can’t talk to anybody else,” Stahl said, “unless you’re using a third-party intermediary.”

City Attorney Jeff Melching said it’s “one thing” for a majority of the city council to get together and talk about “whether they support or don’t support” an issue behind closed doors.

“And it’s another thing under the Brown Act for the majority of the members of a legislative body to get together and talk about whether something ought to be on a future agenda, without talking about the substance of the item,” Melching said.

He added: “It is certainly possible for one member to speak to another member about whether something should go on the agenda, and not whether the item is to be supported or not supported.”

Carroll said “to talk about the fact that we have a divided council … I don’t even know what to say except that it just strikes me that certain people are just not going to be pleased in the public.”

Fox said she thinks the new policy will be seen as “a huge mistake by the mayor,” who she says “completely misunderstands the community she was elected to represent.”

Though Carroll was the one to introduce the policy, Fox said it’s under the direction of Shea, “who wants to silence every other voice on the council that doesn’t agree with her.”

Responding to some of the public comments before the Tuesday vote, Shea said “Honestly we’re not divided at all. We get along pretty well.”

Correction: A previous version of this story incorrectly stated that Garden Grove required the council majority’s approval to place all items on the agenda. Garden Grove council members only need majority approval to place items on the agenda if they will be up for a vote. Items for discussion only don’t need majority approval. Voice of OC regrets the error.