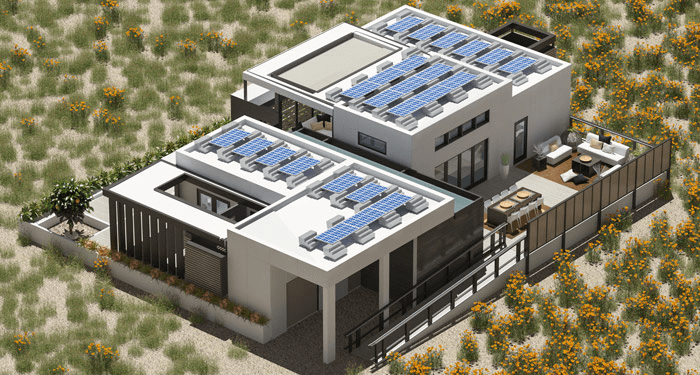 One of the downscaled Federal clean energy  programs that could greatly benefit California is the U.S. Department of Energy’s highly successful Solar Decathlon design competition. Teams of college students from across the world design, build and operate highly efficient houses that are powered by renewable energy. The houses are assembled at a central location for display, evaluation, and awards.

This is unfortunate: According to an evaluation study by the Department of Energy, the Solar Decathlon:

As the U.S. surrenders its leadership position on fighting climate change, other nations have stepped in: Solar Decathlons are now being held in Europe, China, the Middle East and Africa. In addition to combating climate change, countries in these regions—especially China—are positioning themselves to take full advantage of the rapidly expanding green economy.  Incidentally, there are no teams from the United States in  the European Solar Decathlon which opened in Budapest, Hungary July 12, 2019.

While the Federal Government has pulled back on the reins, California is vigorously going green. California’s legislature has passed ambitious climate change legislation while governors of both parties have made tackling climate change a priority. Last month, the City of Los Angeles released its own ambitious Green New Deal.

To increase its impact, the California competition could be expanded to include a sustainability exposition which would include professional development and consumer workshops, as well as K-12 education events. Sustainability vendors would display and explain their products, services and new technologies. As many as 100,000 visitors per day could visit the competition houses as well as the exposition.

The idea of California having its own leading-edge design competition which promotes innovation, education, and market expansion has the support of former Governors Jerry Brown and Arnold Schwarzenegger,Los Angeles Mayor Eric Garcetti, and Kevin de León, President pro Tempore Emeritus of the California State Senate and author of California’s 100% Clean Energy Mandate. However, we will need everyone’s support.

California’s legislature has adopted the bold and commendable goal of state energy sources being 100% renewable by 2045 (SB 100). To maintain California’s leadership position in the field of clean energy, we must harness the creative energy of our youth, the academic community, industry and labor.  By working together, this competition could set a new milestone in clean energy and help make California the sustainability capital of the world.

Fred Smoller is an associate professor of political science at Chapman University. He spearheaded the effort to bring the Solar Decathlon to Irvine, California in 2013 and 2015.  Richard King created the U.S. Department of Energy Solar Decathlon in 2000 and was its director until he retired in 2016. He is currently in Budapest, Hungary supervising the 2019 European Solar Decathlon. King has supervised 14 competitions.