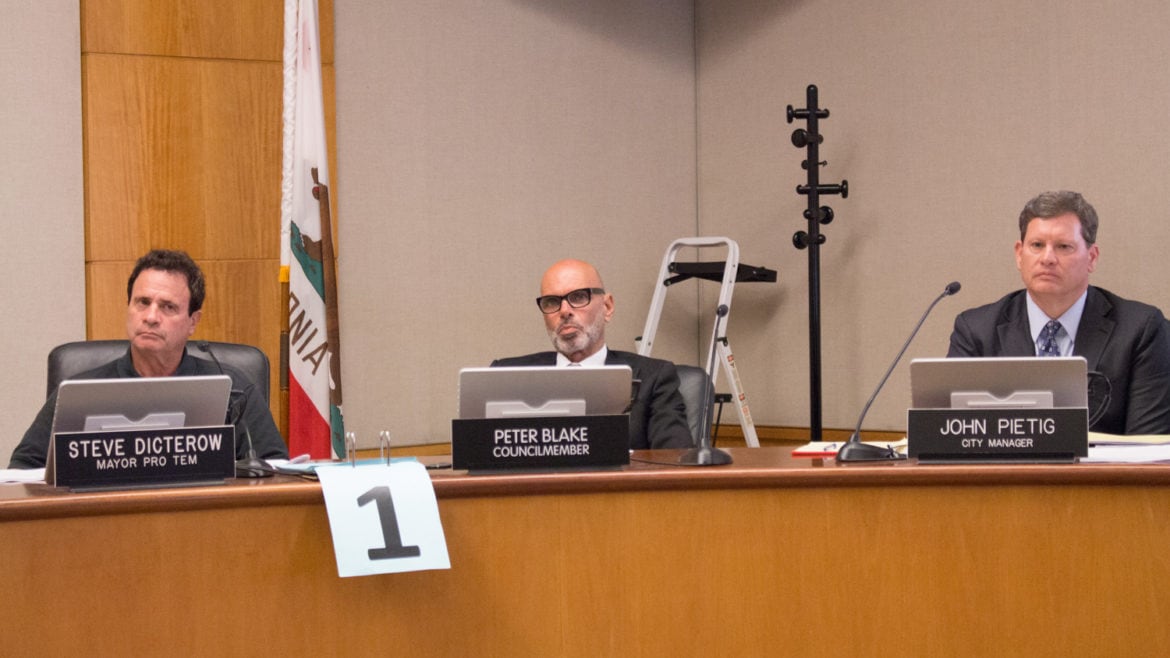 But in November last year, nearly 4,900 people did.

Now Blake – who calls himself an independent — is publicly battling with residents who oppose him, getting into verbal brawls and personal exchanges with people both online and while he’s on his council seat during public meetings.

He says his actions shouldn’t come as a surprise to anyone.

“The residents knew exactly what they were getting,” he said in a Sept. 17 interview. “During this one debate, I was asked: ‘What would you do to restore civility in this community, if elected?’ I said: ‘If you want civility, don’t elect me.’”

Now that he’s in office, his critics say he’s united the city’s “mixed bag” of residents against him.

“He’s taking anyone that speaks against him and saying that we have a conspiracy, that we have a coordinated effort,” said MJ Abraham, who lives in the city’s south end. “Quite frankly, some of us were on opposite sides. We don’t socialize, we don’t know each other that well.”

Even former supporters, who now disapprove of Blake’s behavior, are joining his critics, according to resident Michèle Monda.

Monda, who gave money to Blake’s campaign during the last election cycle, said people who supported him “are coming forward and going ‘oh my gosh, what did we do?’”

When so many different types of people come together, Abraham said, “there’s a problem.”

“We have a serious hostility problem.”

‘I Worry About the Future of Laguna’

The last several months have prompted Blake’s critics to implore the other four members of the City Council to step in.

Mayor Bob Whalen this month came forward with a council decorum policy that he said would crack down on disorder at City Hall. Council members adopted it unanimously at their Sept 17 meeting.

But Blake’s critics said Whalen’s new meeting rules open members of the public up for removal from meetings if deemed uncivil, and that they censor residents more than they address people’s complaints about Blake. If deemed in violation of the mayor’s policies, Blake could at most be reprimanded or censured in a city statement, according to the new guidelines.

Whalen didn’t respond to a request for comment for this story.

Councilman Steve Dicterow, in a phone interview, called the last several months so “unpleasant” that “I don’t even know that I want to run for reelection.” His term is up after 2020.

Councilwoman Toni Iseman said in a phone interview her hope was that “Peter is at least getting people to pay attention.” 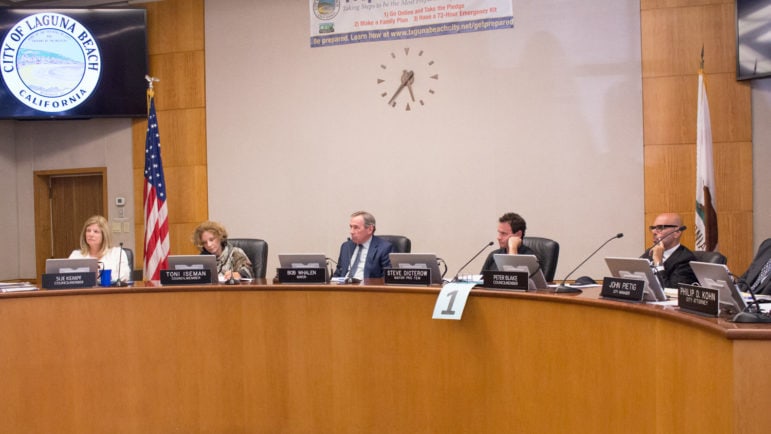 During the public comments portion of one Sept. 10 meeting, resident and former city council candidate Lorene Laguna stepped up to the podium and played a voicemail from Blake that he said was responding to a statement she made about him on Nextdoor, a neighborhood social networking app.

“There’s a fine line between the bullshit I’m willing to take from you and you making accusations like the one you made,” Blake said in the voicemail, calling her expletives twice and telling her “you’ll see what happens.”

Blake said in the Sept. 17 interview that when people “write horrendous things about me online, I respond to them in kind.”

Blake’s also a frequent presence in the comment sections of online articles that mention him.

Responding to one critical opinion article about him by Monda, who has a regular column on the Laguna Beach Independent, Blake commented: “If anyone would know about ‘yelling and intimidating’ it’s you! You take to the podium frothing at the mouth and start screaming disparaging comments at council and staff.”

Blake said no one can write something about him online and not expect him to respond to it.

“We can take that off the table right away.” 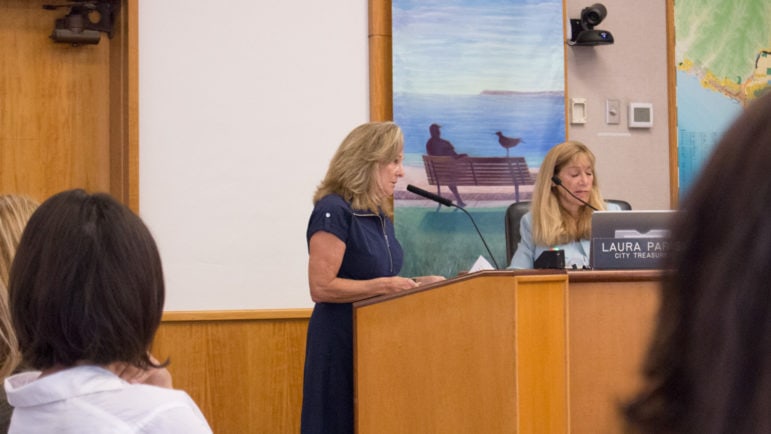 Abraham said Blake’s actions have reached a point where people who oppose him “are afraid to go to a meeting.”

Iseman at the Sept. 17 meeting said that notion alarmed her.

“When people tell me, they won’t come to a meeting, or they’re afraid to speak, or I read what’s said to them on the internet, I worry about the future of Laguna.”

Resident Alison King said she’s afraid to say “anything of significance in this open forum that Mr. Blake doesn’t agree with, because I’m afraid I will be attacked by him and bullied and called a liar and sworn at and whatever else.”

“Let me tell you something about these people in there: they would walk across glass, shards, in bare feet to get to this place on Tuesday night. Nothing stops these people from coming here,” he said.

Blake said that for the first time, when residents approach the podium in public comment “and lie, there’s someone up there that says you’re lying.”

‘I Refuse to Apologize’

Blake called residents liars from his seat during a July 9 City Council meeting, when they protested the possible abandonment of pedestrian pathways connecting streets in the city’s Temple Hills neighborhood.

“Most of you are not from Temple Hills,” he said when people in the audience started yelling at him.

“I double down on everything I’ve ever said, and I refuse to apologize,” Blake added, maintaining his critics are not the “silent majority I represent.”

He describes his critics as “a vocal minority of a few hundred people, and a few gadflies that show up to every meeting and think they’re going to control this town and control this council.”

“As long as they look up there and they see this face up there, they will never have control of this council again.”

Blake says he’s merely a “symptom” of a larger “disease” he claims was created at City Hall by city preservation group Village Laguna.

Village Laguna was founded in 1971 in opposition to the construction of high-rise buildings along the city’s coastline, according to its website. Since then, it’s remained an advocate for maintaining the city’s character in its current state, typically pushing for building height restrictions and environmental preservation.

Iseman, who was supported by Village Laguna during the last election, said people who criticize the group don’t “have an understanding of what Village Laguna has achieved.”

“We have fought tooth-and-nail over the years to keep the town the way that it is. It’s remarkable that we have this sweet piece of coast left that hasn’t been overrun by huge development,” she said, adding that those are the fruits of Village Laguna’s efforts.

Blake’s critics say he’s vilifying the group as the city is revisiting its downtown specific plan, which could result in the easing of zoning and height restrictions to open the door for more developments in the area.

Last year Blake received around $19,000 from Liberate Laguna, a political action committee that raised money during the election cycle partly from a group of real estate interests and developers, according to campaign finance records. Among the companies that gave to the committee is 4G Wireless, which is owned by property owner Mohammad “Mo” Honarkar. His company gave $20,000 to the committee last year.

Blake denied any “underhanded” agenda with developers, but said the downtown area is the “worst” and “most restrictive” part of town.

“Try changing some part of this downtown and watch Village Laguna come down to try and stop you,” he said. “Nothing can change in this downtown.”

Abraham said what’s going on in the city is “bigger than us.”

“He has turned our public venue into a place where he’s trying to eliminate our participation and our voices,” she said. “If he eliminates us, he has a clear path. He has nobody opposing him, and that, we can’t let happen.”

Blake contends that with his election, “the people of this community finally have a voice.”