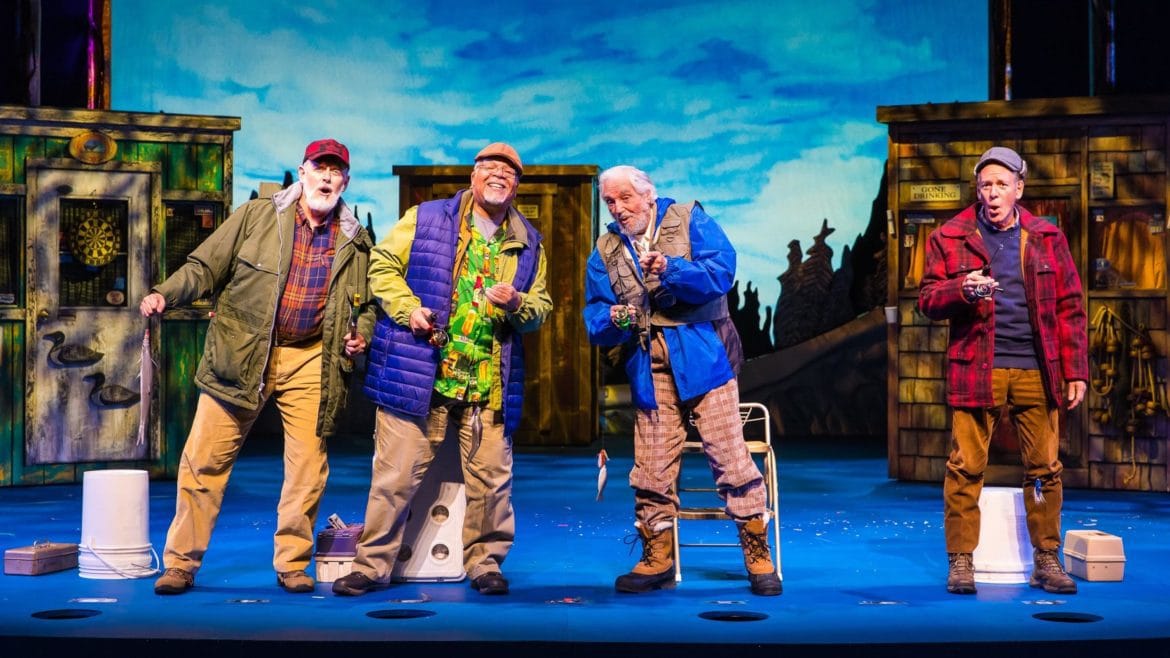 Old men get grumpy, and when they’ve known each other for a lifetime, emotional slights and romantic rivalries can lead to a grudge feud that drags on for decades.

The basis of the 1993 film “Grumpy Old Men” has been deemed viable for the Broadway musical treatment with “Grumpy Old Men: The Musical,” now in its West Coast premiere courtesy La Mirada Theatre for the Performing Arts and McCoy Rigby Entertainment.

Producer Tom McCoy calls the new staging “a 49-state premiere” since the play’s 2018 U.S. debut occurred not in New York City but at the Ogunquit Playhouse in Maine, and director Matt Lenz has retained two stars from the original cast: Mark Jacoby in the Jack Lemmon role of John Gustafson and veteran Hal Linden as his cranky old dad (Burgess Meredith in the movie).

Music-directed by Benet Braun, the show’s score (by composer Neil Berg and lyricist Nick Meglin) is pro-forma, comprised of soft rock songs and ballads that are standard issue for any contemporary stage musical.

No, the real focus of “Grumpy” is the relationship between Jacoby’s John and Gregory North as Max Goldman, John’s lifelong frenemy.

Their interplay is detailed in Dan Remmes’ book, which closely follows the original Mark Steven Johnson screenplay but filters and sanitizes the movie’s stream of profanities and the vicious practical jokes next-door neighbors Max and John perpetrate on each other.

The fictional version of the tiny real-life town of Wabasha, Minn., brims with the kind of eccentric, zany figures that have populated musicals since the Golden Age to point of becoming staples, surrounding John and Max with a raft of sitcom-style small-town personalities.

Ariel Truax (Leslie Stevens), a sexy, free-spirited redhead, makes a flashy entrance by riding a yellow snowmobile onto the La Mirada stage. Her presence instantly warms up the frigid climes of the tiny community and its citizens, as well as the stage, with her ardent musical number “Heat Wave.” 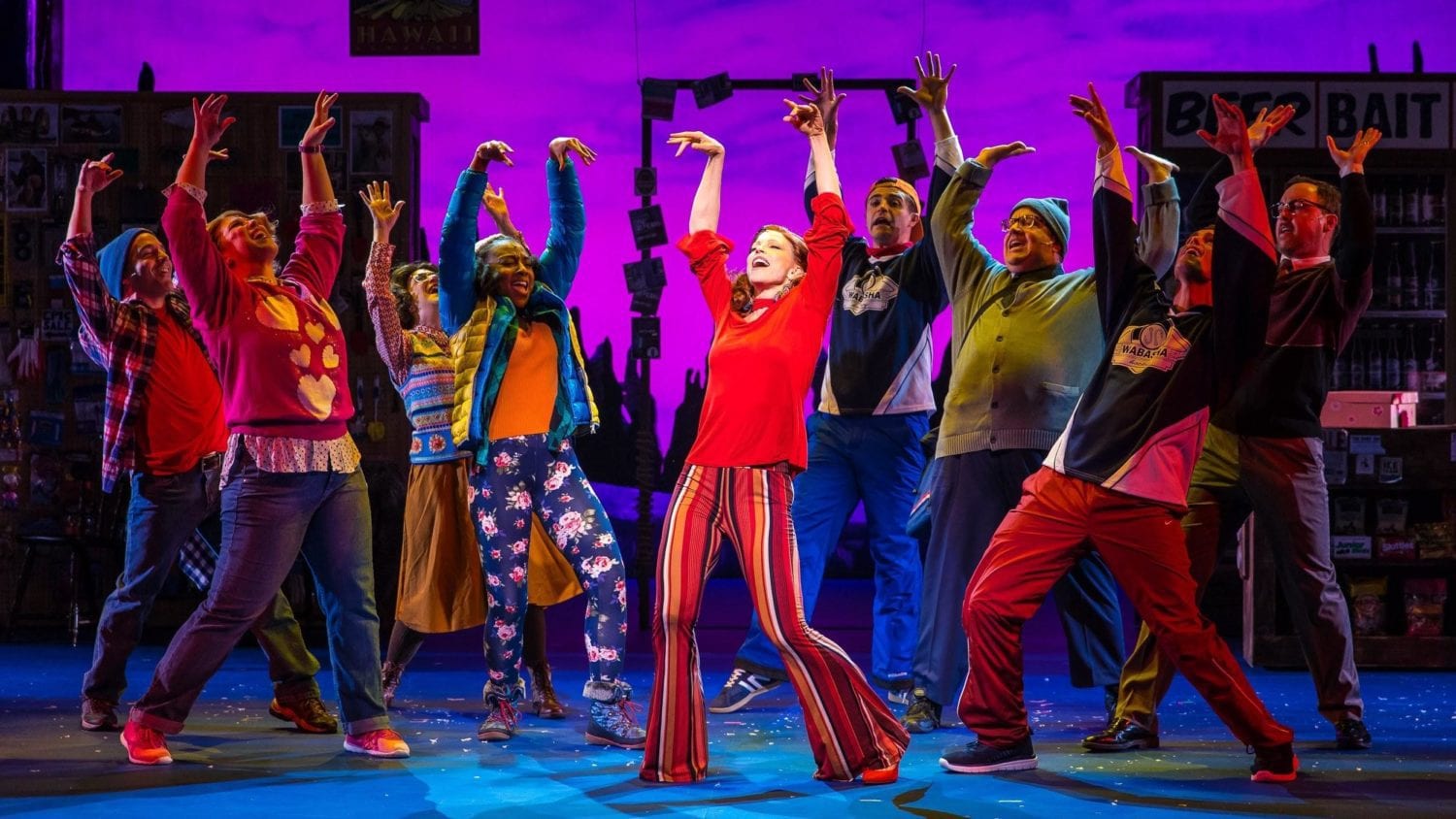 Leslie Stevens plays a free-spirited college professor who warms up the tiny town of Wabasha, Minnesota – and whose presence renews a rivalry between two grumpy old next-door neighbors who’ve been feuding for decades in La Mirada Theatre’s production of “Grumpy Old Men: The Musical.”

When she moves in across the street from John and Max, it renews the romantic rivalry spawned during their youth. While John’s solo “When No One’s Around” pleasingly captures his having embraced a life of solitude, he begins to rethink this when he discovers he and Ariel, a college professor, have a mutual love of literature and the arts.

On its own terms, “Grumpy Old Men: The Musical” is the kind of fluffy, feel-good show that generally pleases the theater-going masses. Its good-natured tone lends it a similar feel to “The Full Monty,” as both depict older guys struggling to retain their self-images and sense of masculinity.

Do John and Max really hate each other? Of course not – the sourpusses’ constant sparring is a sport that invigorates them, whether via one-word epithets (“moron,” “prick,” “pinhead,” “putz”) or zingers (“If you were any dumber, I’d water you,” “You wouldn’t know hard if you went over Viagra Falls,” “Your face makes onions cry”).

Only late in the day, triggered by a crisis, does Max reveal his true feelings toward John in North’s emotional solo “Family or Friend.”

In courting Ariel, Max is ultra-confident, whereas John proceeds with uncertainty. Jacoby makes this caution endearing as we watch a character who has always sold himself short and tended to settle for less. The appealing Stevens soft-pedals her character’s artsy nature and hippie-skippy wisdom as Ariel quotes authors and philosophers unknown to most Wabashans.

Linden, credited as a special guest star, spews less verbal profanity than his movie counterpart, wryly observing that in anyone’s life, “the first 90 years go by fast.” He fires off one-liners (like “I’m older than Moses” and “My prostate’s got stretch marks”) and some enjoyable comedic lyrics when giving son John advice on his sex life in the song “Life is All About Livin’.” 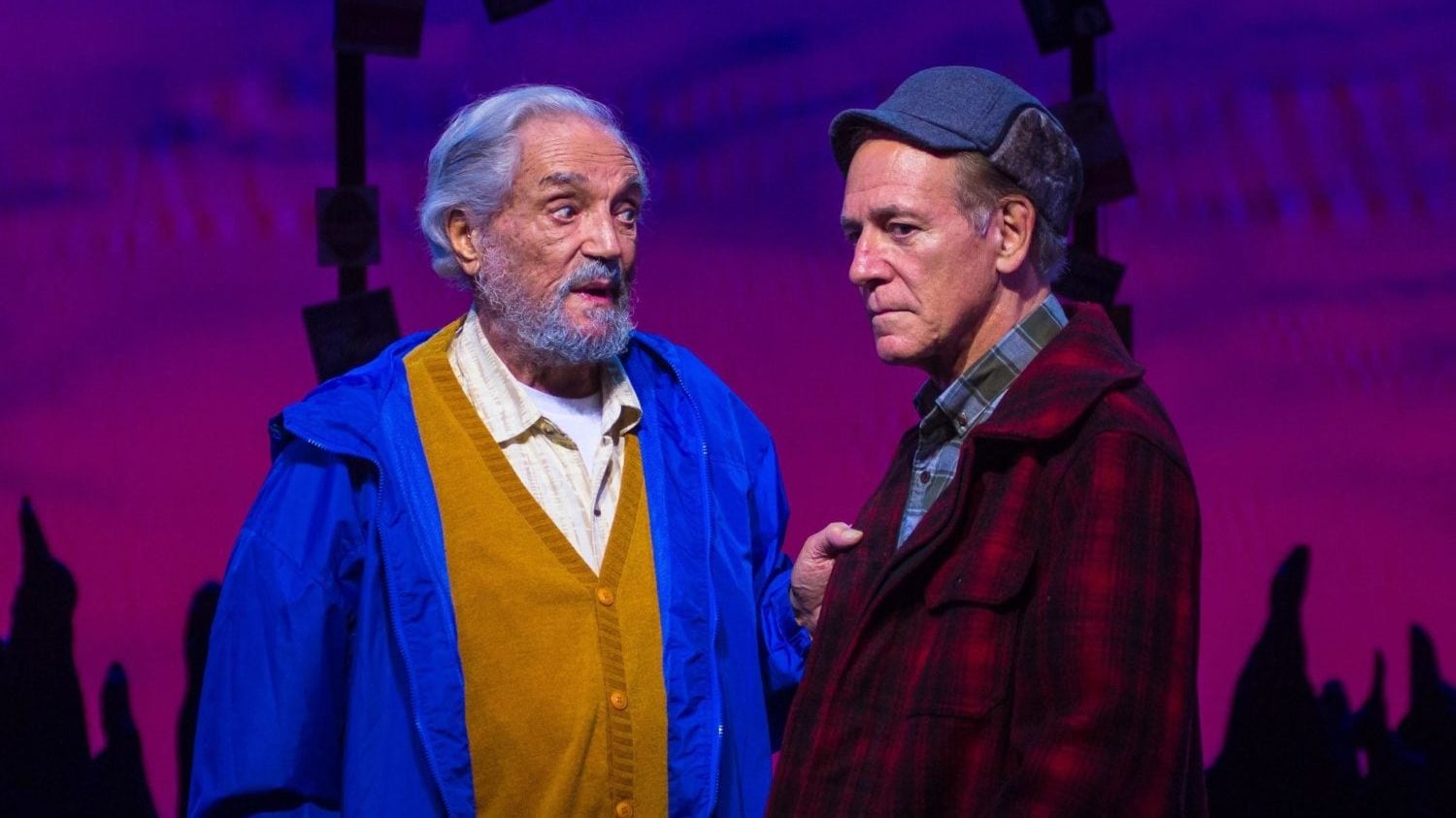 Reprising their roles as a grumpy old man and his even grumpier, even older dad from the show’s U.S. premiere at Ogunquit Playhouse in Maine are Hal Linden, left, as Grandpa Gustafson and Mark Jacoby as his son John in La Mirada Theatre’s production of “Grumpy Old Men: The Musical.”

Also billed as a guest star, Cathy Rigby’s seemingly slow-witted Punky Olander dispenses ridiculous advice and silly anecdotes, winning us over with the solo “Your Own Home.”

In a subplot, John’s daughter Melanie (Ashley Moniz) and Max’s son Jacob (Craig McEldowney) cautiously toy with the idea of becoming a couple despite her dream to escape to Southern California’s perpetual sunshine and his desire to launch a career in law in New York City, plans expressed in the wistful duet “Parents and Paradise.”

The un-grumpiest of John and Max’s peers is Chuck, the affable old fella who runs the local bait shop and apothecary (drugstore). It’s an understated supporting role that in wonderful veteran actor Ken Page’s hands brims with life and joie de vivre, notably in the solo song “An Angel,” Chuck’s ode to Ariel.

April Nixon struts purposefully around town as Sandra Snyder, the I.R.S. agent gunning for John for his having made honest tax return errors – and sizzles in her flashy showcase number “Snyder Comes Along.”

If the show’s songs are notable, it’s not because of any inherent musical strengths in the score but instead thanks to Lenz’s performers and their chops. Each of the nine principal performers has at least one moment in the spotlight, and all nine are ably supported by the ensemble’s eight terrific members.

Their combined efforts showcase the mirth generated within us by watching gents react to aging by growing crankier and more verbally abusive by the moment.