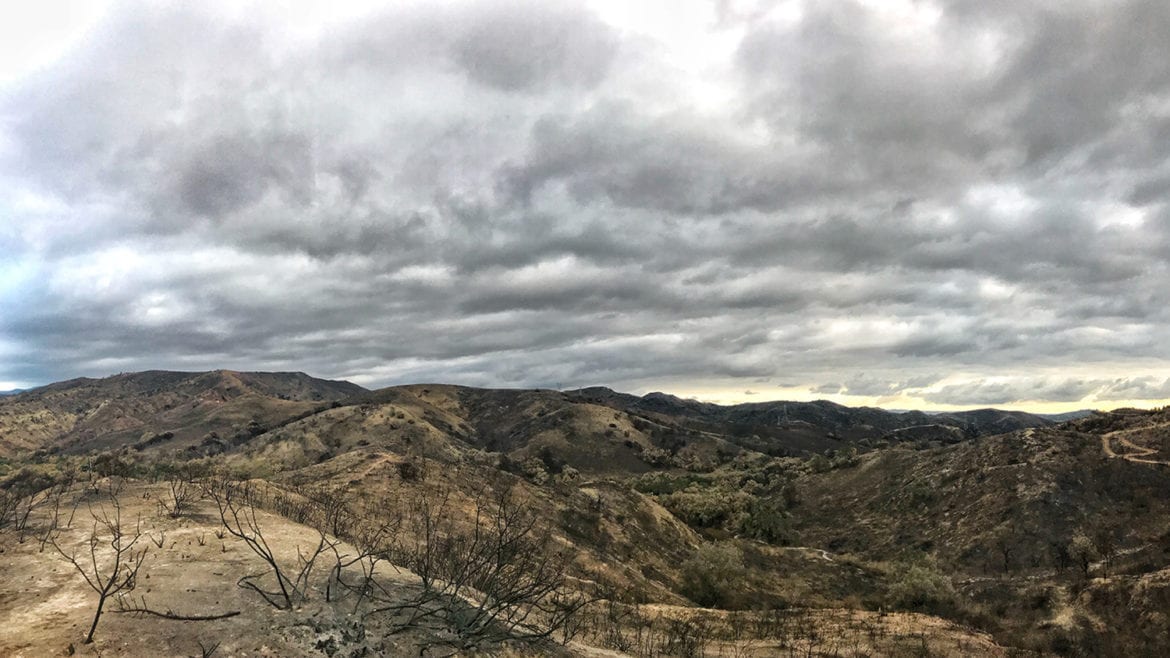 With the onset of the traditional fire season this fall, there are serious questions about whether Orange County cities and emergency agencies are ready.

They called on OC cities and agencies to institute a series of changes, including new minimum requirements for local fire departments to coordinate with the county as well as the establishment of a task force to create a new emergency disasters plan. Those changes have yet to be implemented.

Editor’s Note: This story launches Voice of OC’s new disaster section, offering readers local news stories and op-eds related to natural disasters. The section goes way beyond the typical news page, also offering live feeds and interactive maps on quakes and fires, metadata that helps tell the full story behind natural disasters and easy to understand guides on what to do before, during and after a quake or wildfire.

Given the lack of coordination in the Canyon 2 Fire from 2017 Orange County grand jurors opted to investigate how emergency managers communicate with the public.

“For some (public agencies), communicating vital emergency information to the public when interagency coordination is essential has not been a priority,” the report’s summary reads. “With the exception of one jurisdiction, there are no written standardized protocols among studied jurisdictions for issuing alerts and warnings.”

Indeed, during the Canyon 2 Fire, Orange County Fire Authority officials even downplayed initial public reports of flames seen from the 241 toll road, delaying any fire response for more than an hour (such as in the 911 call received below).

According to the Orange County Emergency Operations Plan — a set of county guidelines on preparing for, responding to, and recovering from disasters — over 160,000 acres of land across the county are currently classified as high fire-severity zones.

The report states that due to continued development in these areas, “the wildland fire threat will only worsen in the coming years.”

That means alerting the public to fast-moving fires is an issue that isn’t going away.

“If we’re going to allow people to live in those areas, they deserve public officials’ full attention on how to make it as safe as possible.” said Dr. Irwin Redlener, Director of the National Center for Disaster Preparedness at Columbia University.

Many Orange County officials did not want to talk about the grand jury report, either declining interviews or submitting noncommittal official responses to grand jury concerns. 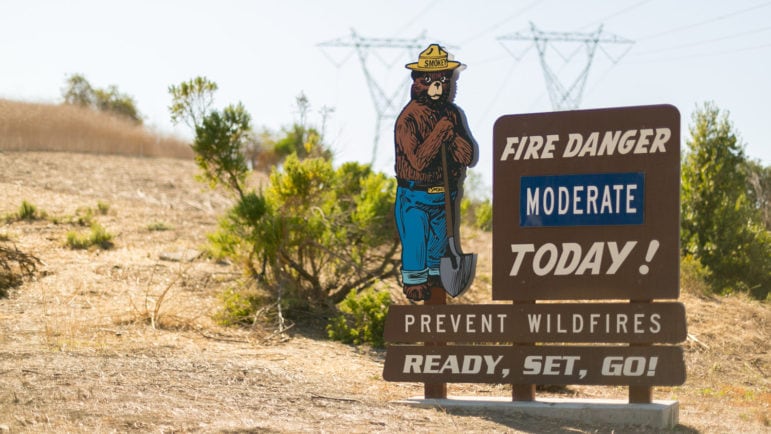 City of Anaheim officials declined to speak in person but released a brief press statement.

“Overall, we feel our response to Canyon Fire 2, an aggressive and fast-growing fire that threatened homes and lives in Anaheim, was successful. Everyone was able to get out safely, there was no loss of life, and we were able to reduce damage to homes and other structures,” stated Anaheim spokesperson Lauren Gold in a press statement.

Yet the grand jury report directly criticized the city of Anaheim numerous times for a poor response to the fire that led to delayed communications across the county and slowed evacuations.

Anaheim was in charge of establishing a Joint Information Center and coordinating emergency messaging, but failed at both, according to the grand jury report.

The information center is used to coordinate organize public messaging in an emergency spanning multiple jurisdictions, and it was decided that Anaheim would take the lead once the fire spread.

Yet all three of Anaheim’s preselected sites were unable to serve because they lacked the proper equipment.

These breakdowns led to numerous failures in communicating with the public.

The Orange County Sheriff’s Department and the Orange County Fire Authority also had significant roles during the Canyon 2 Fire as two of the primary agencies in charge of informing the public.

During the fire, the sheriff’s department sent out two conflicting evacuation maps of the city of Orange from the Emergency Operations Center. The maps were sent within twenty minutes of each other, causing the Sheriff’s Twitter feed to re-tweet the old map, confusing residents on whether or not they were in an evacuation zone.

Another conflicting evacuation order saw the City of Orange send a school to Canyon High School in Anaheim Hills, which had already been evacuated earlier in the fire.

In their response to the grand jury, the Orange County Sheriff’s Department agreed with the grand jury’s finding that poor coordination led to a delayed response and confused residents.

OCFA agreed with the sheriff’s on their responsibility for mistakes, but disagreed with the jury’s statements, stating, “It was a matter of life and death and the best information at the time was sent.”

Colleen Windsor, Director of Communications for the OCFA, said that the reason emergency messengers failed to coordinate was the urgency to get the information to the public.

“In an emergency that’s rapidly progressing, waiting to get that proper notification through an EOC (Emergency Operations Center), you’re losing time,” Windsor said. “We understand that we as a public safety agency have that responsibility to coordinate the messaging, however, timeliness drives it all.”

In the report, the grand jury requested that the county upgrade the current emergency hotline system, which cannot currently track caller metrics. The sheriff’s response states that the updates need more funding, but the department has not yet determined how much it will cost according to Carrie Braun, Director of Public Affairs for the sheriff’s department.

“This project will require technical scoping which will then determine the budget.  In the meantime, County Telephone Services does have the ability to track call volumes, including dropped calls, for the hotline phones so the EOC (Emergency Operations Center) will maintain contact with them during future activations,” Braun said.

The Sheriff’s department also answered that they would not be able to establish a feedback or review system by the Sept. 30 deadline that would allow residents to share their opinions on how public agencies responded to the crisis.

However, Fire Authority officials indicated in their response that it would be inexpensive to post a public survey for opinions.

“A Survey Monkey can easily be posted on the OCFA website to receive feedback,” their response said. “We may need assistance in developing appropriate survey questions.”

Major changes also have been made to update the mapping data from AlertOC and train officials on how to use it, as well as increased coordination with the California Highway Patrol in disaster planning to limit miscommunication in the future.

The primary problem with AlertOC came from the fact that the software’s vendor Everbridge was using mapping data from 2014, which meant many new neighborhoods missed out on notifications.

Another issue that AlertOC faced was the sheer inability to reach much of the County. The program is optional, allowing users to register their cell phone for evacuation and emergency alerts, but only around 2% of the county has registered according to the report.

This along with the disappearance of many landlines means that many people in Orange County won’t receive a notification to evacuate through their phones.

Even for the 20,000 people registered with AlertOC, the alerts don’t come through as a disaster alert. The alert phone calls can appear as scam calls, coming from out of the country (such as in the photo and audio clip below). 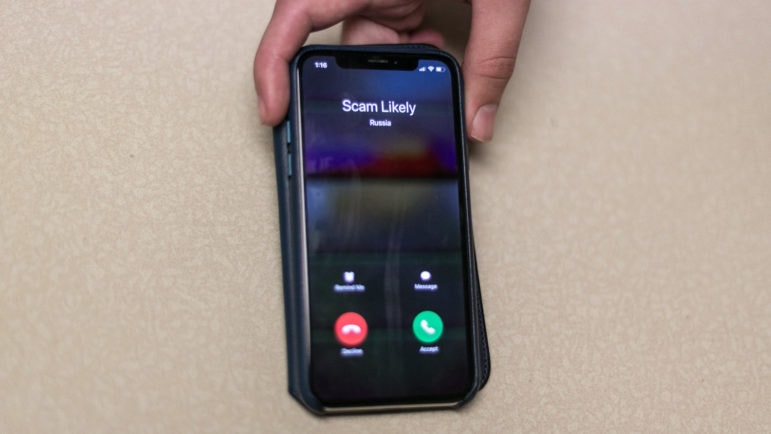 AlertOC phone calls, such as this test notification received, can appear as scam calls, coming from out of the country.

City officials also failed to distribute the alert messages as they weren’t trained on how to use the system according to the grand jury. The city of Orange was unable to send out their own alerts as everyone who was trained in the system was working in their emergency response roles.

The city had to contact the County to disperse their information for them, potentially contributing to the Orange evacuation map mix up from the Sheriff’s Department social media team.

In their official response to the grand jury submitted Sep. 17, the city of Orange disputed any disorganization, stating, “Residents in the city of Orange were frequently informed of quickly changing evacuation zones through various communication channels.”

So far, the largest investments on wildfire protection made thus far have come from the city of Laguna Beach, with officials indicating they have nearly $23 million in funding already secured over the next two years for several emergency programs.

One of the major proposed upgrades in Laguna would be a new outdoor warning system throughout the city, costing an estimated $1.2 million that would rely on a satellite instead of a cell tower to send emergency notifications. The idea came after a visit to Paradise, California in the aftermath of the Camp Fire.

“We’re reliant on cell phone technology for our current alert and warning system,” said Jordan Villwock, emergency management director for Laguna Beach. “One of the takeaways was that the fire burned so fast it burned over cell towers, and over 90% of the community didn’t receive an emergency alert.” 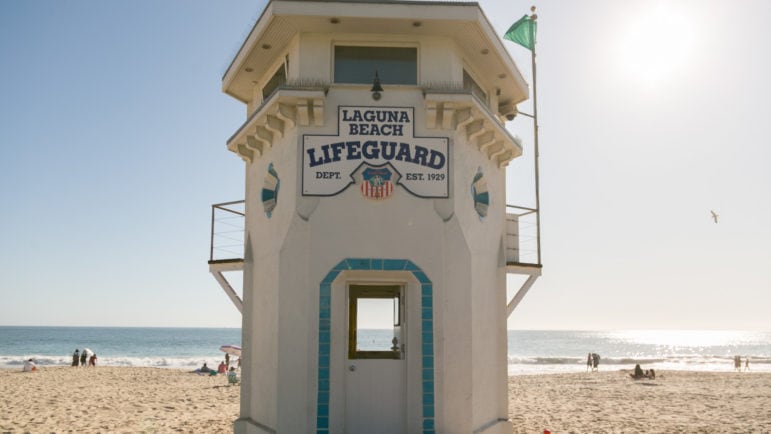 Laguna Beach’s White Lifeguard Tower located on Main Beach is one of the three outdoor warning systems installed throughout the small coastal city.

The City of Anaheim recently chose to allocate $250,000 to the fire department to help prepare for future wildfires. Those funds would be used at the discretion of the city manager and the fire chief.

One of the proposed uses for the funding is to begin investigating the possibility of adding a secondary road from the Mohler Loop area in Anaheim Hills.

Anaheim also released a new “Know Your Way” initiative in coordination with the California Highway Patrol to help teach residents of the Anaheim Hills area find the best evacuation routes in the event of a fire.

Many of the issues the county faced in the fire could’ve been easily averted with better organization, according to Professor Redlener.

“This isn’t a difficult problem to fix. There has to be a single coordinating body, single messages, a single understanding of what the strategies are in an emergency,” Redlener said. “This is a management problem within agencies and among agencies.”

Redlener also warned that despite the recent grand jury study and some fixes, the mistakes from the Canyon 2 Fire would have long lasting effects.

“The erosion in confidence among the public is very serious and it’s very difficult to fix that,” Redlener said. ““Even if they fix the coordination, they’re still going to have to prove that it’s actually working, because people will very much remember how inadequate systems were the last time.”