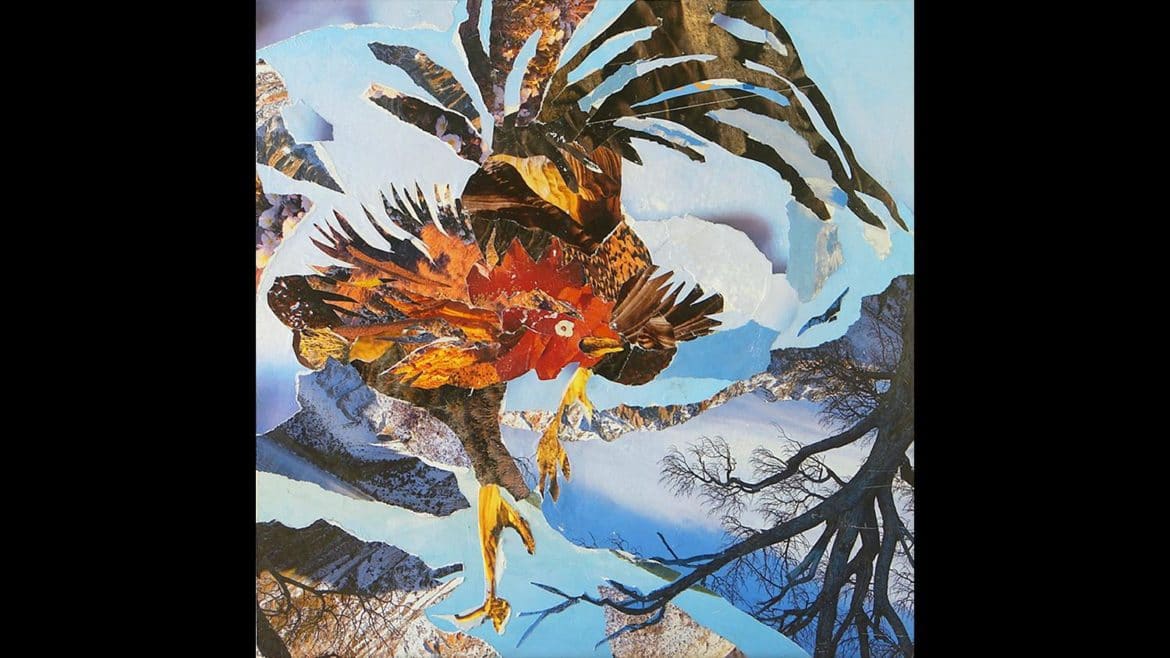 "Rooster Dance," a collage made of torn/cut magazine paper on wood by Gregory Gallardo. On view at Founders Hall Art Gallery, Soka University.

The gallery consists of two stories in stately Founders Hall, close to the campus entrance. Plenty of natural light filters in, there’s a strangely maternal (i.e., breast-populated), bluish Dale Chihuly sculpture hanging from the ceiling, and the second floor offers nice views of the campus. The gallery is also a fine place to hold a reception.

Oh yeah, and there’s plenty of open space on the walls to hang art.

Gallardo’s show on the first floor is titled “Simplicity, Patience, Compassion.” Woodward’s exhibit on the second floor is called “Chasing Infinity (or the Mis-Evolution of the Digital Primitives).” That’s kind of a mouthful, but the title makes sense in a way.

Gallardo, who was born in Santa Ana and still lives there (north Tustin area), does collage, acrylic and oil paintings. His collages open the show, and they’re made with torn/cut magazine paper on wood. These works are pretty and quite photorealistic.

Among the collages there are many strong pieces, but “Blue Jay in Flight,” “Some Distant Dawn” and “In Stillness and in Storm” are probably the strongest. “The Dream” is one of my favorites. It depicts a woman at rest on a reddish orange couch, but something else is going on in the top right-hand corner that makes you think that her mind is not at rest; in fact, it is entering the mysterious world of dreams, exploring. 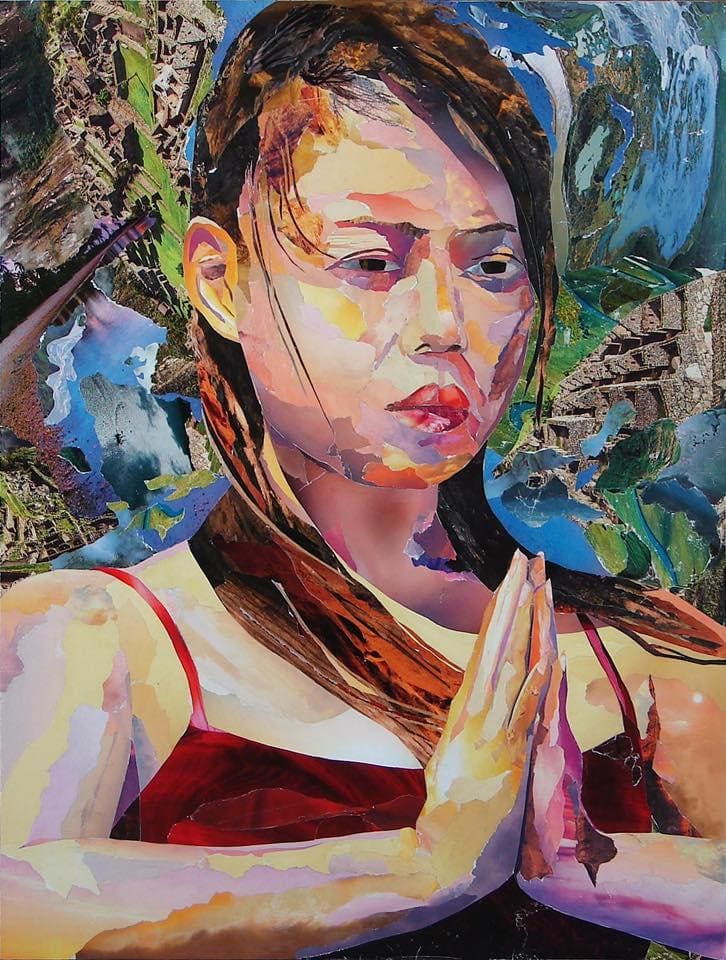 “In Stillness and in Storm,” a collage made of torn/cut magazine paper on wood by Gregory Gallardo. On view at Founders Hall Art Gallery, Soka University.

The exhibit continues with acrylics on canvas or wood capturing nature scenes — trees from the view below, the coastline along Newport’s Back Bay, scenes of driving up California’s seemingly endless state and interstate highways.

“Tree of Life” and “April” are standouts, playing with the intricate arrangement of the leaves and utilizing a kaleidoscopic, stained-glass effect with color. These two acrylics on canvas are simply quite beautiful.

About 10 oils on canvas capture the charming, unspoiled Newport Beach Back Bay. These paintings are generally well executed, but get a tad repetitive after a while. We get it: It’s Newport Beach Back Bay. Perhaps I did not sense enough variance in this group. My eyes were pleasantly surprised when the scene shifted to the more abstract “Invisible Sun,” a solid piece of painting.

Gallardo has painted a number of California highways, most of them acrylics on wood. These have a geometric, puzzle-piece aspect to them. They’re reminiscent of Richard Diebenkorn, with a little of Jackson Pollock-inspired drip thrown into “CA Route 101.”

“Some Distant Dawn,” a collage made of torn/cut magazine paper on wood by Gregory Gallardo. On view at Founders Hall Art Gallery, Soka University.

Some of the Interstate 5 paintings and other California landscapes combine the Diebenkorn sensibility with some of Willem de Kooning abstract expressionism and pushing around of paint, especially “Invisible Sun,” “8:00 AM,” “I Know The Pieces Fit” and “7:00 AM.” “I Know The Pieces Fit” is directly referencing de Kooning; if it didn’t have Gallardo’s signature, one might even guess it was an original de Kooning, which is a good and a not-so-good thing.

“Santiago Canyon” is a more local reference in this series, and it’s tastefully done.

I emerged from this exhibition with two questions. First, why aren’t the works dated? I thought that was standard practice for museum and gallery shows.

Second, the accompanying materials say the artist donates 40% of all direct art sales to charity. How can he possibly afford that? It’s tough enough to make a living as an artist, without giving nearly half of your earnings away. Kudos, Mr. Gallardo.

Woodard’s paintings are, in a couple of words, far out.

They depict a world where technology has apparently taken a wrong turn, at a juncture early in the process. Thus we have the subtitle, “The Mis-Evolution of the Digital Primitives.”

I suppose there is a paradox in the term “digital primitives,” because we tend to think of digital things as advanced. Or perhaps it’s an oxymoron, like “jumbo shrimp” or “frozen fresh vegetables.”

Many of Woodward’s acrylic on canvas paintings are rather unruly. They seem to burst with a chaotic, nerve-wracking and sometimes insidious energy. There is a method to the madness, however, if you actually look from far away, but the vibes and effects are still kind of weird.

Woodard, an Aliso Viejo artist, has developed a knack for unusual combinations of colors. Who else would combine orange, brown, purple, blue, teal and pink on the same canvas, as in “Nightdrive” (2019)? This painting also seems to capture an underworld of nervous, caffeine-fueled nighttime energy. To unabashedly quote the Grateful Dead, “What a long strange trip it’s been,” Joel.

Woodard’s “Superorganism” series (2018-19) looks like techno-alien creatures growing out of control. The earlier pieces in the series seem to depict a Frankenstein-like, angled figure emerging from the high-tech laboratory of demonic scientists. In the later pieces, we see arms, tentacles, nodes and connecting wires shooting out from the subjects. Altogether, the “Superorganism” paintings are quite a vibrant, but still weird, collection. 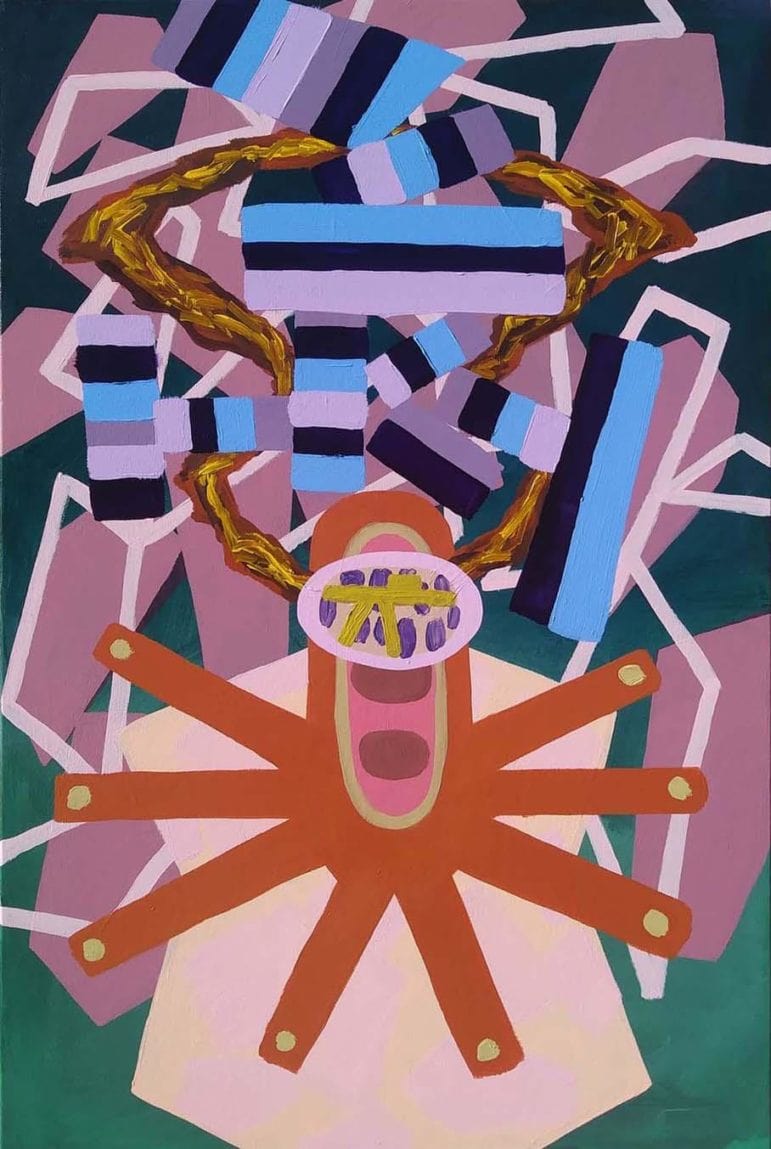 Several works in this exhibit are very vertically oriented, including “Star Sailor” (2018), “Morningrise” (2019), “Extractor” (2018), “Particle Streamer” (2019) and the “Superorganism” series. “Commuters” (2019) is among these, and the viewer can sense the anger and frustration emanating from the reds, hot pinks and purples. One can also make out a couple of abstracted figures, which are ostensibly drivers stuck in a terrible commute?

Even “Sunset” (2019), which is achieved on a more squarish canvas, has strong vertical elements, such as the streaks of pink acrylic paint, alternating between lights and darks, piled up on top of each other in the top left-hand corner. The rest of the painting is populated with Woodard’s systems, patterns, shapes and designs, making this one of his stronger pieces.

The artist does offer another couple of mediums besides acrylic. “Soldiers 1-10” (2017) are accomplished with oil paint stick and spray paint on paper. “Lucid Embryonics” is a 2018 series of gouaches on paper. Similar to the “Superorganism” series, a body appears to be desperately trying to move, escape or break out of the picture.

Woodard’s “Chasing Infinity” pictures are populated with strange, primitive yet retro-futurist figures that seem to have a life and energy of their own. Altogether, the work is definitely a commentary on the dark side of technology. The paintings are colorful and vibrant, yet also nightmarish and dystopian. 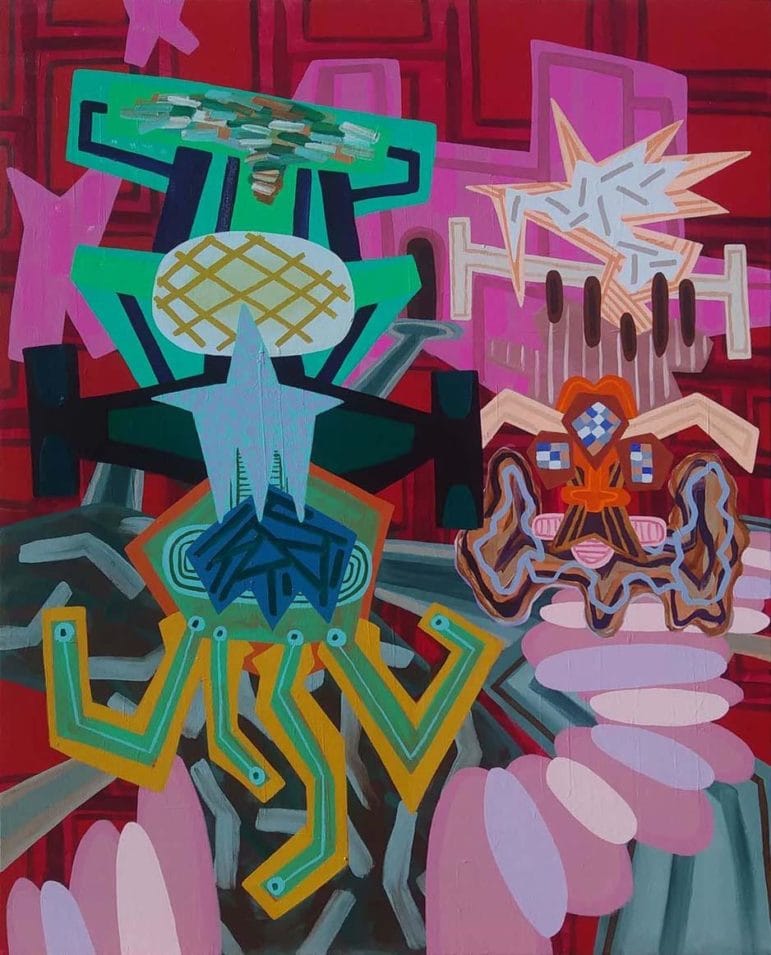 Incidentally, if you are ever out and about in the art world, Woodard can be seen almost daily at the Laguna Art Museum, where he’s director of operations and head of security.

Both solo exhibitions at Founders Hall Art Gallery are powerful and expressive on their own. However, I left wondering if there are any sort of connections between the two.

My conclusion: There’s not a whole lot of connective tissue, since one is more nature-based (Gallardo), and the other focuses more on the digital and technological (Woodard).

However, if you approach the exhibits with the questions: What can painting do? What boundaries can art push? Then you might come away with some common answers.