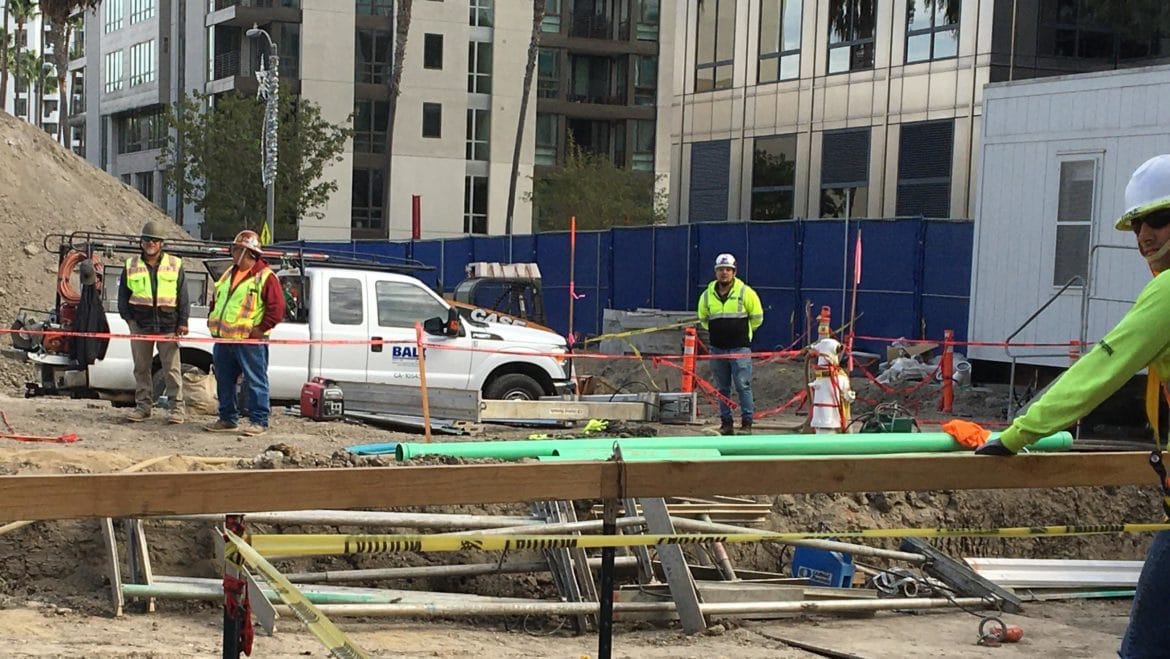 The construction site where the new, $73 million Orange County Museum of Art is being built. The project is scheduled to be completed by fall 2021.

On Sept. 20, the Orange County Museum of Art (OCMA) and its supporters celebrated the groundbreaking of its new, 53,000-square-foot building, to be constructed on a long-designated site at the Segerstrom Center for the Arts in Costa Mesa. Members of OCMA, the Segerstrom Center and their respective boards were in attendance, as well as city officials and a core group from Morphosis Architects, headed by Pritzker Prize-winning architect Thom Mayne.

It was a festive occasion, with upbeat remarks, a photo opp with bulldozers and hard hats, and a healthy lunch accented with champagne afterwards. 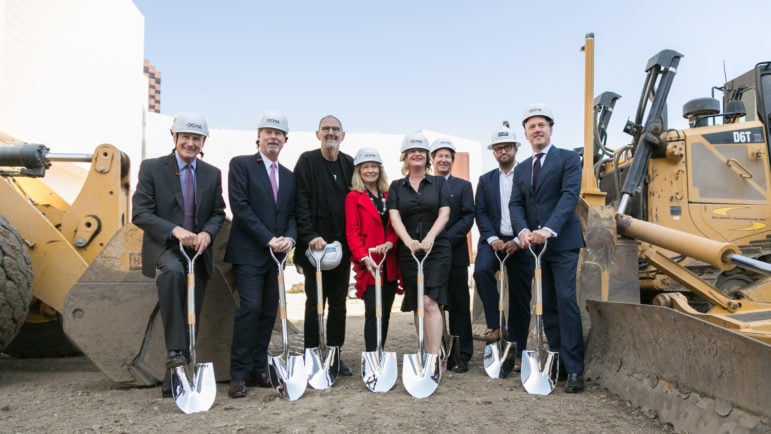 Now comes the real challenge, with the task of passing all city and state ordinances, assemblage of materials, construction and keeping to a pretty tight timeline. The new museum is scheduled to open in fall 2021.

“A lot has been happening on the site,” said Todd D. Smith, director and CEO of OCMA since 2014. “They continue to do excavation and grading on the site. The first round of work should be done by the end of November. The next phase is actual construction. So far we’re very pleased with the work being done.”

At Segerstrom Center, adjacent to the Julianne and George Argyros Plaza, workers from Clark have been busy testing the soil, grading and preparing the site for its foundation.

There are bulldozers, excavators and a giant multi-story crane on the construction site, which is bordered by blue fencing and a long white wall that features selected illustrations of the future museum. 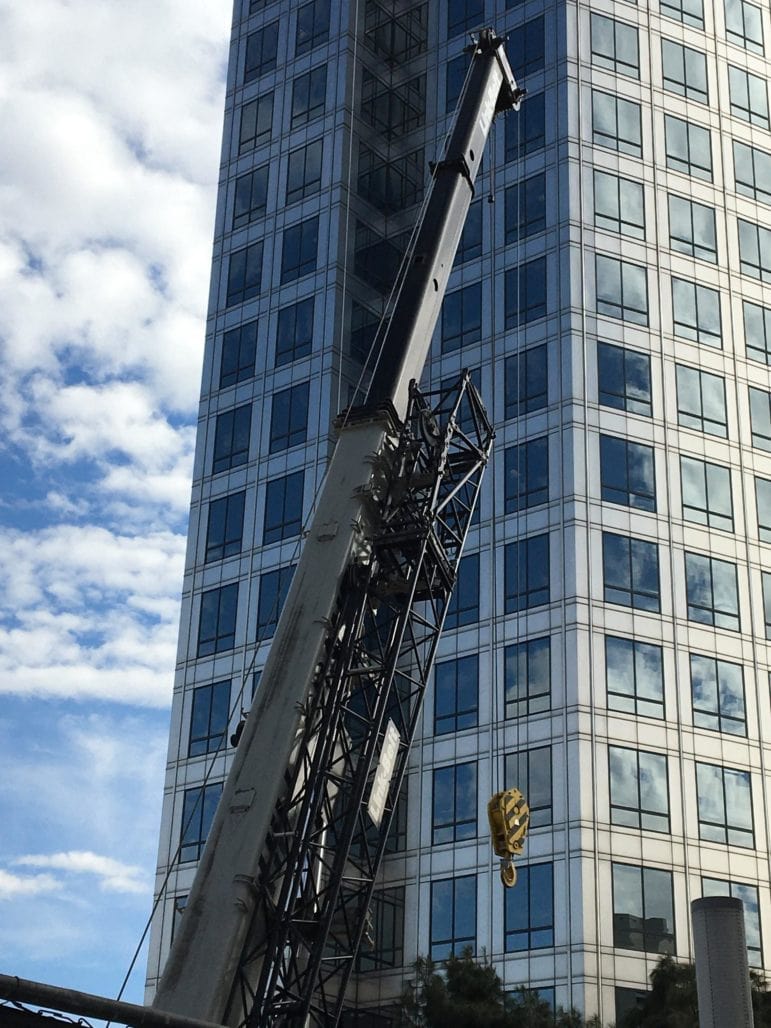 A large, multi-story crane arches above the Orange County Museum of Art construction site. Next door is Plaza Tower, designed by Cesar Pelli. 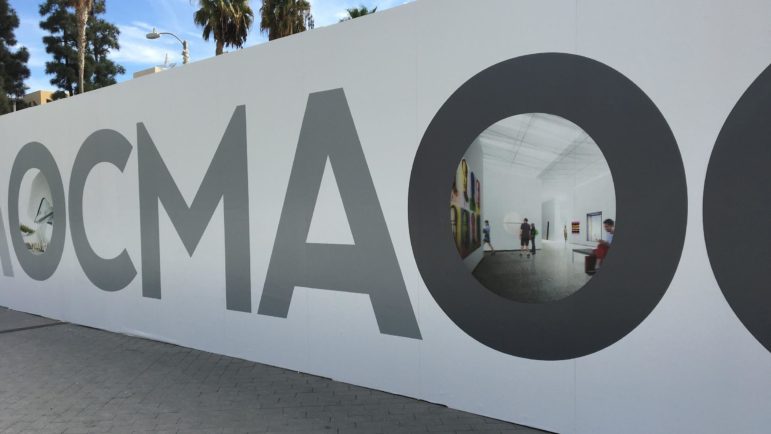 A white wall protects a portion of the Orange County Museum of Art construction site in Costa Mesa. Pictured in the “O” is an illustration of what the museum is supposed to look like.

A white wall protects a portion of the Orange County Museum of Art construction site in Costa Mesa. Pictured in the “O” is an illustration of what the museum is supposed to look like.The wall also encourages passersby to visit OCMAExpand – Santa Ana, located just a few blocks west on Sunflower Avenue, across the street from South Coast Plaza. OCMAExpand — housed in a former Room & Board furniture store — opened in October 2018, and has been serving as the museum’s temporary location.

So far, OCMAExpand has presented three “seasons” of solo exhibitions, and plans to continue into early 2021 with season 5.

“We don’t want to be dark for too long before we move,” said Sarah Jesse, deputy director of programs and operations at OCMA.

OCMA has been leasing the 31,000-square-foot space from CJ Segerstrom & Sons (owners and operators of South Coast Plaza) on very favorable terms, according to Smith and Jesse. It’s unknown what will become of the OCMAExpand space once the museum relocates to its permanent home.

In the meantime, one can bet that Clark Construction and Morphosis Architects are keeping busy at this juncture. With winter approaching, wet weather could play a factor in the coming months.

Also, another deadline — Dec. 15 — is approaching for international trade tariffs. The cost of construction materials could increase.

Case in point: Right next door, the $240 million Renée and Henry Segerstrom Concert Hall experienced a yearlong delay in its opening, and costs increased by $35-$40 million during construction.

“It’s always a concern,” said Brandon Welling, principal architect on the project and a partner at Morphosis. “We do a lot of legwork early on with cost estimators and consider contingencies for certain elements. We’re depending on (our partners) as experts, and always monitor how the economy is going.

“Certainly delays are one thing that adds costs, basically. Everybody wants to keep working. It really pays to partner with a good general contractor. Clark is based in Orange County, and their offices are not far from the project site. We really depend on them, once everything is moving, to collaborate with us once things come up.”

Welling said the museum, the contractor and the architect meet weekly at or near the site to discuss all pertinent matters.

“The entire team has to stay on top of things, to prevent any one thing from getting out of hand,” he said. “We work together to mitigate those. But in general, we monitor contingencies to make sure everything works together.”

The Segerstrom Center for the Arts is also kept abreast of developments. There was a hiccup earlier this year, with former Center President Terrence Dwyer filing an appeal with the city in January against OCMA’s master plan for development, citing parking, site access, building design and outdoor activity space. But that appeal was withdrawn in March, after discussions between SCFTA and OCMA.

It appears as if fences have been mended, and hatchets have been buried. Dwyer left the Center in February, after 12 years at the helm.

At the Sept. 20 groundbreaking, Segerstrom Center Chairman of the Board Mark Perry said, “Segerstrom Center for the Arts is delighted to welcome Orange County Museum of Art to our thriving campus. The exhibits, programs and ambitions of the museum will contribute significantly to the dynamic cultural energy and commitment to community already at the heart of Segerstrom Center.

The Center’s next president, Casey Reitz, was not available for comment. He will start his new job in December.

It’s About the Benjamins

So far, construction is on schedule and the budget remains the same, Smith said.

During the groundbreaking ceremony, Smith announced that 65 percent of the $73 million project had already been raised. That’s approximately $47.45 million, with $25.55 million left to go.

Smith said recently that OCMA has raised some more money since then, but he did not disclose how much. “We’ll put out an announcement at the end of the year, as to where we stand,” he said.

He added that while OCMA has gone public with its campaign goals, the “public phase” will actually be during the last 10% of the campaign. “That will be the leadership phase — the major gift phase,” he said. “We are soliciting gifts, and we have naming opportunities available.”

Respect for the Neighbors

Meanwhile, OCMA and Morphosis have just received another award for the new museum design. It’s an institution/merit award, given Oct. 28 by the American Institute of Architects, Los Angeles chapter. The “Next LA” award honors future projects that have not yet been built.

The future OCMA will include a terrace, mezzanine, administrative offices, a café, room for a gift shop and approximately 25,000 square feet of flexible exhibition space, about double the amount in the previous Newport Beach location (11,000 square feet in the galleries, 14,000 if you count lobby space).

A grand, public stair will connect OCMA with Argyros Plaza. Windows will line the wall facing Avenue of the Arts, allowing the public to see some of the art that will be exhibited inside. 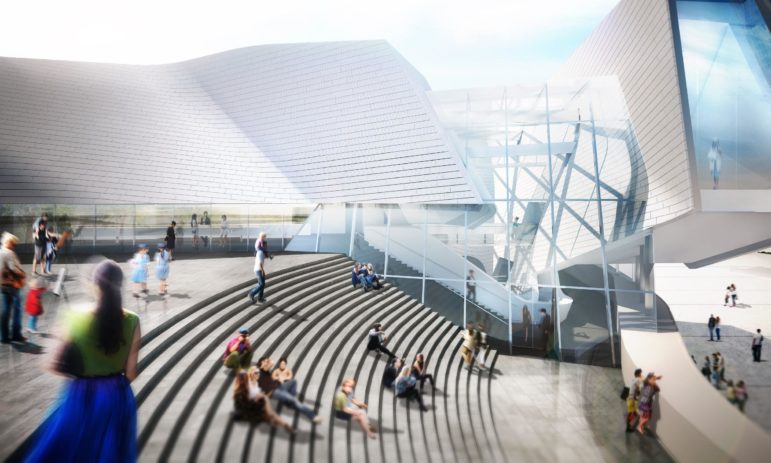 A rendering of the terrace of the proposed Orange County Museum of Art building, to be located at Segerstrom Center for the Arts in Costa Mesa. The completion date is scheduled to be fall 2021.

Welling said the exterior shape and colors are meant to complement the Renée and Henry Segerstrom Concert Hall, the Plaza Tower and even the expansion of South Coast Repertory. All of these were projects designed by the late architect, Cesar Pelli.

“You’re going to see its relationship to its surroundings, yes,” Welling said. “Not from a materialization standpoint, where we’re trying to echo everything. But for sure in terms of the massing and the tones that we are using, (they’re) informed a lot by that.”

And the OCMA staff hope to carry some of the experiences they’ve had in the temporary location into the new museum. The open and airy space at OCMAExpand has allowed the curators and artists to implement more installation and performance into the program. 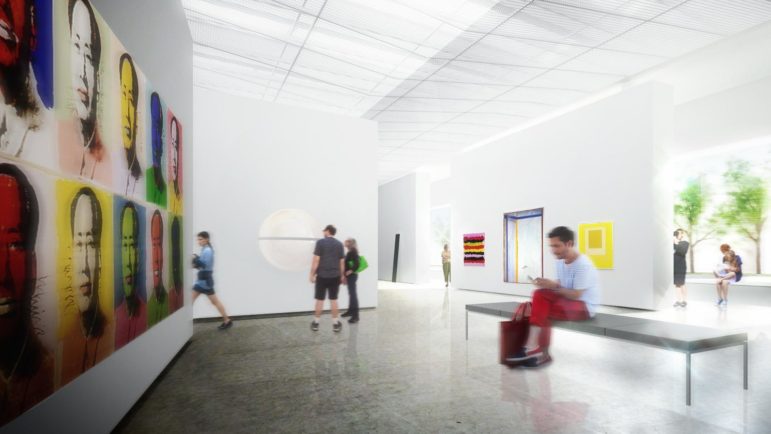 OCMA’s ground floor and mezzanine are designed to hold open, flexible galleries for their permanent collection installations and temporary exhibitions.

“One of the things that’s exciting about (the new museum) is they’re kind of giving us blank spaces and slates,” said Cassandra Coblentz, OCMA’s senior curator and director of public engagement. “If we have to design a modular wall and design for each exhibition, we’ll do it. Hopefully we’ll have a lot of freedom to do so.”