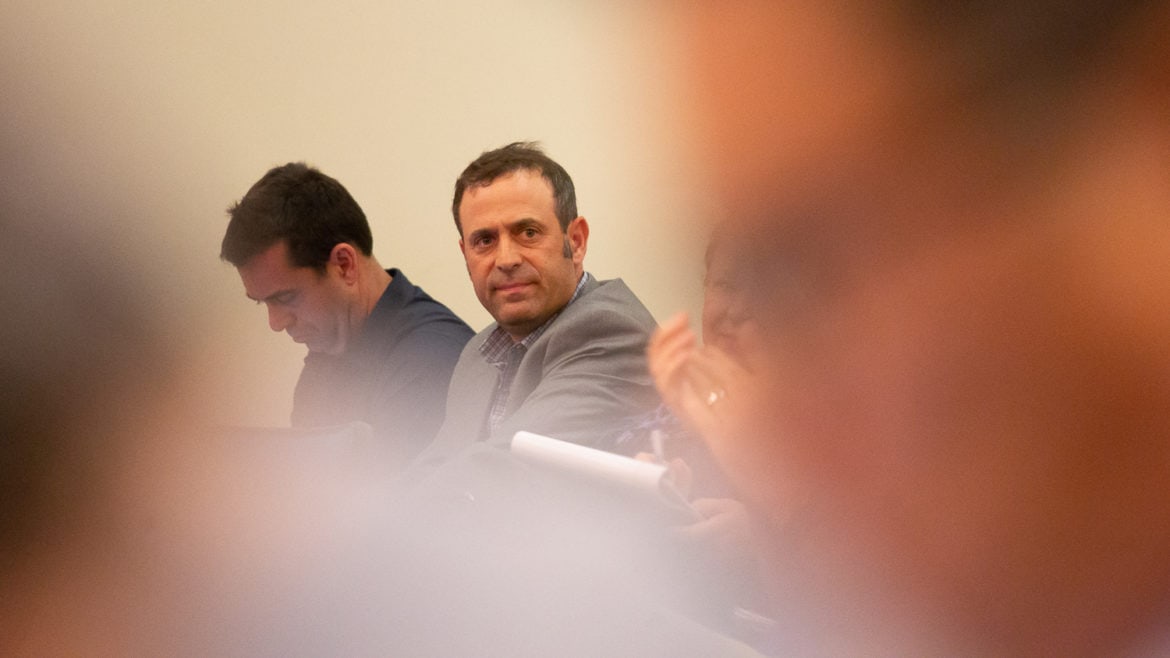 A much-disputed apartment complex is moving forward in north Santa Ana, after two years of uncertainty and protests by nearby homeowners who say the project is too large for the surrounding neighborhood.

The proposed apartments at 2525 N. Main St. – located in the city’s Park Santiago neighborhood – were authorized to proceed by City Council members in a 4-3 vote at their Tuesday meeting, after much downsizing by developer Ryan Ogulnick’s company Vineyards Development Corp. 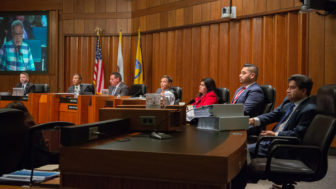 The Santa Ana City Council during the Nov. 19 meeting.

The apartments, which will sit across from the MainPlace Mall and Discovery Cube, have become the center of an ongoing debate over the power of developers in Santa Ana politics. By approving the project, the Council changed the property’s allowable land use and accepted the findings of the project’s heavily-contested environmental impact report that critics claimed understated — and in some cases “omitted”– the apartments’ impacts on traffic, parking availability, and the aesthetic of the neighborhood.

Architects and designers for the project denied those claims before the council members took their vote.

Ogulnick, speaking to Voice of OC, also maintained there’s a housing need in Orange County, and cited campaign promises by California Gov. Gavin Newsom to get 500,000 new houses built in the state every year over the next seven years.

“Where is that housing going to go?” he said outside City Hall.

But the fight isn’t over, according to multiple Park Santiago residents, who say the plan is to either bring a legal challenge to the project’s environmental impact report under the California Environmental Quality Act, or pursue a referendum on the project, which would turn a decision on the project over to the city’s registered voters.

Sarmiento before the vote said residents who were mobilized to vocally oppose the 2525 N. Main St. development need to apply that mentality to projects citywide – not just ones in their neighborhood. He specifically pointed to the Willowick Golf Course, authorized by Garden Grove and Santa Ana for development despite concerns a project on the site would price the working class Latino families out of the surrounding Santa Anita neighborhood.

“Let’s not be selective with one neighborhood. Let’s be consistent with all neighborhoods,” Sarmiento said, entertaining the idea of the Council pledging to never again approve any more high density development projects in the city — “If everybody’s prepared to do that, then we can talk about this project.”

Councilman Jose Solorio, who represents the Park Santiago neighborhood in his district, said Ogulnick has made multiple concessions, and that the project “is about half the size” it was originally.

“It’s going to fill up a bad area,” Solorio said, referring to Santiago Park, where Ogulnick as part of his development agreement would hire around-the-clock security patrols.

He’ll also put around $700,000 for improvements to the park. He had originally pledged over $1 million but slashed that number when he made his most recent revisions to the project that brought the number of apartments down to 256.

Solorio, while voting to approve the project, added an amendment to Ogulnick’s development agreement that would require him to put in and pay for extra fencing around the area for security. Those were terms Ogulnick accepted at the podium before the vote.

“Mr. Ryan Ogulnick has been a gentleman with me,” said Villegas during the deliberations. “But he also knows I’m loyal to the people. I’ve tried to hear both sides.”

Villegas gestured to a council chambers packed with Park Santiago residents and other residents from across the city, most of whom were opposed to the project: “You voted me into office … I answer to you.”

Bacerra before the vote called the amount of public speakers Tuesday – over 100 of them – “inspiring.”

“There’s a lot of flaws in the project,” he said during the meeting, adding that he couldn’t “in good conscience” be supportive of it.

While Bacerra said he appreciated Ogulnick’s effort to “stick this out,” he said the project at its current state doesn’t satisfy the city’s general plan requirements in his view.

“Architecture is a socially-engaged art. It could and should inspire,” said resident Jeff Katz in public comment. “Projects should be poetic. They should be human. This project should engage in our imagination. It should inspire us. This is not what this project is doing.”

Katz then looked at Solorio: “To my council member, as you prepare to run for Mayor, you have a chance to set your legacy.”

Resident Steve Steggell at one point during public comment called on Solorio as the Councilman was stepping out and thanked him sarcastically for his support for Park Santiago residents.

Steggell then echoed a phrase repeated frequently that night: “This is a good project, but it’s the wrong location.” 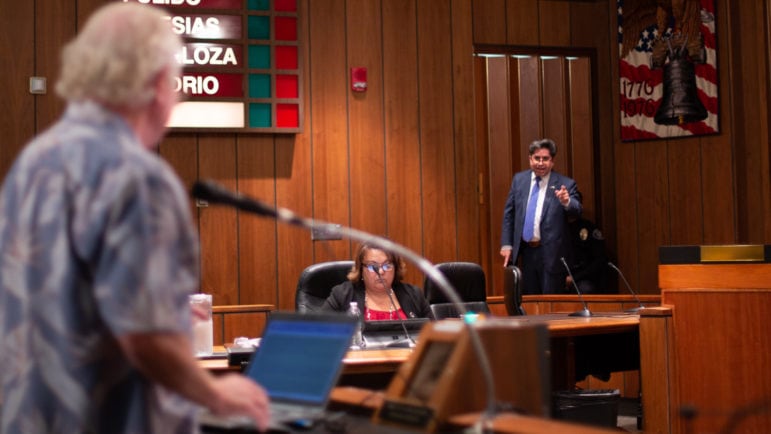 Jose Solorio, stepping out, is called to and stopped by resident Steve Steggell during public comment.

Architect RC Alley, speaking on behalf of the project while Ogulnick sat in the audience, said that in all his years working in development, “I’ve never witnessed as much misinformation on a project.”

Alley went on to dispute a number of criticisms about the apartments, one of them being claims the project would severely worsen traffic in the surrounding area.

But since Vineyards submitted its initial proposal in October 2017, the City Council had sent the project back to the Planning Commission, which in turn rejected the apartments on three different occasions.

Tuesday’s meeting was the first one for the newly-elected Bacerra, who previously ran for and lost the seat in the 2018 election cycle. That year saw around $320,000 in dark money spent in the election — part of which was in opposition to him.

Voice of OC previously reported that the campaign committee that handled the dark money spent against Bacerra was managed by a Northern California resident with family connections to a Santa Ana lobbyist for the 2525 N. Main St. project.

Ogulnick has repeatedly denied any involvement with the dark money group.

Iglesias and Sarmiento both decried criticisms by members of the public that council members were being swayed by developer money going into their future campaign prospects.

Iglesias said she took offense to those claims, adding: “I don’t sell out.”

Over the last two years, Ogulnick had shrunk the scale of the planned building from an early iteration of more than 500 proposed apartments to 256 apartments. Ogulnick at community meetings and in previous statements to Voice of OC had said his company has never downsized a project to this extent before.

That didn’t assuage the fears of nearby residents, concerned that the project’s density would still be one of the highest in the city next to single-family homes, on top of the developer’s plan for 511 parking spaces — an average of two parking spaces per apartment.

The opposition has been organized mostly by Park Santiago resident Dale Helvig and his group, the North Santa Ana Preservation Alliance.

“The city omitted stuff, the (Council) knew it was omitted, and now they supported it,” Helvig said after the vote.

Heading out of the chambers, Ogulnick stopped to extend his hand to the Park Santiago Neighborhood Association President, Mike O’valle.

“No hard feelings,” Ogulnick said to him.

Brandon Pho is a Voice of OC intern. Contact him at [email protected] or on Twiter @photherecord.