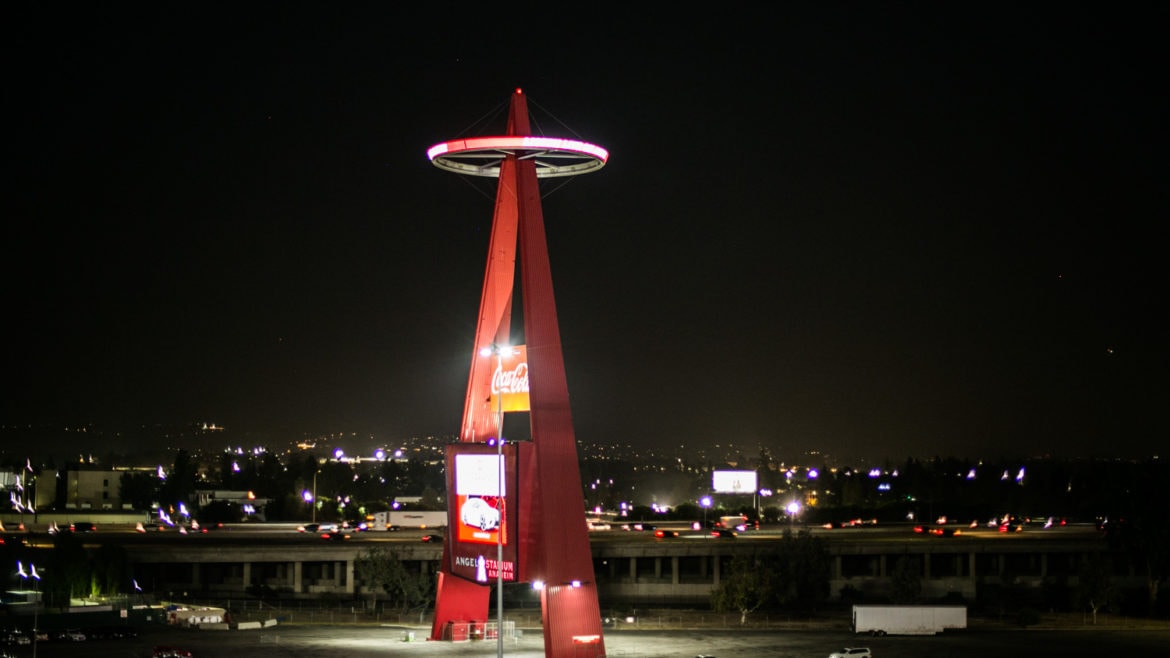 Anaheim City Councilmembers and top city officials may soon have to defend the Angel Stadium sale in court if the City Council doesn’t redo the process in public, according to a demand letter from a renowned statewide open government attorney, who has been retained by a group of Anaheim residents.

“The Council’s approval of this Agreement was a rubber stamp of the terms that had been improperly discussed, negotiated, and agreed upon outside of public view, in violation of the Brown Act (state transparency law),” reads the Jan. 19 letter filed by attorney Kelly Aviles.

Aviles letter alleges councilmembers violated the state’s transparency law because the 1953 Ralph M. Brown Act limits private discussion of any sale of public property to “price and terms of payment” for the sale of the land.

Everything else about the proposed $325 million sale of the stadium and the 153-acres of land around it as well as any general agreements about how to develop the area around it, the next six months of negotiations or the Angels future in Anaheim had to be discussed in public session to be legal under state law, Aviles argues.

In her letter, Aviles’ specifically called out the Angels’ 30-year commitment to stay in the city and the move to sell the stadium as items that should have been publicly discussed.

“The pros and cons of the decision to sell vs. lease public property and the ultimate decision to sell the property must be agendized as an open session item for discussion. Many of the terms included in the Purchase and Sale Agreement and the Fact Sheet, released prior to the December 20 special meeting, would not be permitted to be discussed in closed session either,” states the letter.

“We stand by our process,” said City of Anaheim Spokesman Mike Lyster on Monday.

Thus, the Dec. 20 sale of Angels Stadium and 153-acres of land around it to a shadowy LLC ownership group that includes Angels’ owner Arte Moreno will likely be challenged in court if the city doesn’t re-do the negotiations in public.

“If the Board fails or refuses to cure and correct or respond as demanded, my client will seek judicial invalidation of the challenged actions…” states Aviles’ letter.

Before the land sale proposal was officially released Dec. 4, very little was said by city council members during their regular public meetings all year, other than a quick, lease reinstatement vote last January, an October Council battle over releasing the stadium appraisal and a vague August discussion about what Councilmembers wanted to see in a new stadium deal.

Aviles, who serves on the board of one of the state’s pre-eminent First Amendment advocacy groups, Californians Aware, filed the letter Sunday on behalf of “a group of concerned citizens alarmed by the secret and illegal process used to negotiate the sale of Angel Stadium and surrounding property,” but no names were given.

It’s not Aviles’ first time getting involved in a stadium deal.

An LA judge eventually ordered the commission to publicly release a trove of secret documents, according to the LA Times.

According to a city document tracking the progress of stadium negotiations, the city and Angels representatives met Nov. 15, 22 and 26.

The speed and secrecy of the land sale proposal convinced Councilman Jose Moreno that his Council colleagues knew about the deal ahead of time.

“Let’s just say that, it’s very rare that I’ve come into situations, even among like-minded people, that no questions are asked or other options are pushed,” Moreno told Voice of OC Dec. 4, the day the proposal was released.

Aviles also noted the lack of any Council questions about such a complex sale in the letter.

The starting price for the stadium is $325 million, but according to the sales agreement it can be lowered contingent on a series of community benefits and affordable housing agreements that will be negotiated with a group of investors buying the land, currently only known as SRB Management LLC, later this year.

The only publicly known business partner of SRB is team owner Arte Moreno (unrelated to Jose Moreno). City officials said they don’t know who Moreno’s other partners are and Angels representatives aren’t giving out that information.

Last January, after a narrow November election win, Mayor Harry Sidhu publicly brought up the idea of a lease reinstatement to the City Council, but he and city officials largely sold it as a one-year lease extension.

“Last week, I had met with the Angels owner Arte Moreno. From that meeting it was clear that the team’s priority is to stay in Anaheim. We need time to make that happen. Tonight I’m asking Council colleagues to consider a one-year extension to the current Angels lease to the end of 2020,” Sidhu read from a prepared statement that night.

But the lease reinstatement only extended the team’s opt out window, which expired at the end of last year. Unless the land sale goes through, the Angels could be locked in that lease until at least 2029.

Councilman Jose Moreno forced an August public discussion over the lease reinstatement and the Council, along with Sidhu, said they knew exactly what they were voting on.

Despite not publicly discussing the sale beforehand, City Councilmembers did discuss the stadium twice in closed session leading up to the Dec. 20 vote, which began the stadium sale process.

“Yet, none of the closed session descriptions alerted the public to the crucial issue of public concern: that it was no longer the lease that was being negotiated, but the sale of the Stadium Site,” states the demand letter.

Aviles also said the move shut out the public.

“These violations ultimately prevented the public from discussing whether the City should sell the property at all. Once the public found out, the terms had already been negotiated and the Council’s December 20 vote was a rubber stamp of the prior negotiations,” the letter states.

Sidhu got himself voted to the city’s negotiating team in July, despite protests by Councilmembers Denise Barnes and Jose Moreno.

Throughout last year, numerous residents told the Council they wanted Anaheim back in the Angel’s team name, but Sidhu said the name issue wouldn’t be negotiated, according to a statement he gave the Los Angeles Times in August.

Questions about the stadium sale proposal continued to mount before the Dec. 20 public hearing and despite more than four hours of Council deliberation, it’s still unclear what community benefits and affordable housing agreements will be made, which could shave millions off the $325 million starting price.

Most of the questions about the deal were asked by Barnes and Jose Moreno during the public hearing.

“This is all I keep hearing — who are we dealing with?,” Barnes said. “We have no idea who SRB Management is … just give me some information, please. He has refused to disclose the identity of other partners. You gave me no choice. As a public agency, we must assure the public that there is no conflict of interest in this public deal.”

Barnes said the city also needs to figure out the final sales price before selling the land.

Aviles’ letter also notes the criticism over the starting price and that it “may well be under market value.”

Orange County Register business columnist Jonathon Lansner wrote in a Dec. 18 column the stadium’s starting price isn’t at fair market value because the city didn’t put it on the market.

“It wasn’t an open sale. It wasn’t a competitive market. It was appraised for one buyer, one purpose. This in no way is fair market value. This fails the test,” said Kott during the Dec. 20 public hearing.

But Sidhu argued the city is selling the land at its maximum value, despite not speaking with other potential buyers.

“For those who are saying the land is worth more than $325 million, today is the moment of truth. We cannot see a value of $500 million, as some have said, and have baseball. We can only see that kind of value with no stadium, no Angels and many more buildings on this land. It comes down to a simple question: Do we want to see baseball continue in Anaheim or not?”

Nearby land sales also may indicate the stadium land was undervalued.

The 3.8-acre land that was eventually developed into the George Apartments sold for $17 million in 2014, which is nearly $4.5 million an acre, more than double the per-acre cost Anaheim’s starting price for the stadium.