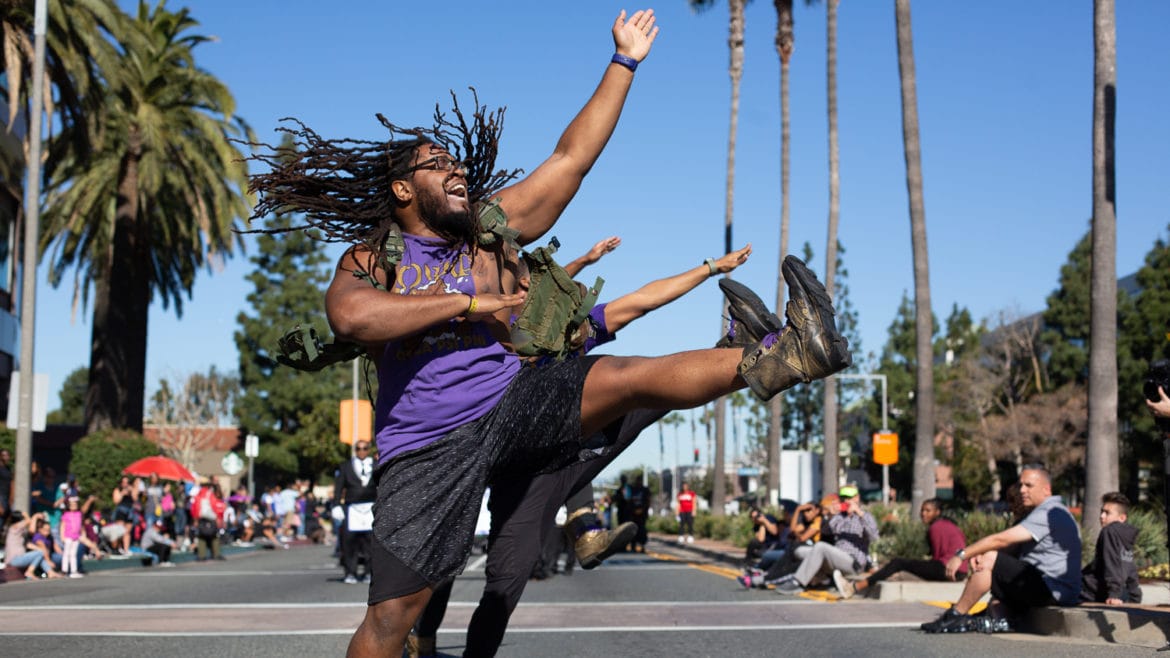 Errol Francis, 23, performs during the 2020 Black History Parade in Anaheim.

Celebrating 40 years in Orange County, the O.C. Black History Parade and Cultural Faire united community members of all backgrounds in downtown Anaheim on Saturday, Feb. 1, 2020. The parade was led by Dwayne “BH” Shipp, the youngest of the ten Shipp children.

Started as a local tradition during Black History Month, the late Helen M. Shipp initiated the parade on February 22, 1980 to build a “community in the community.” It was a way for African American residents in Orange County to represent their existence, churches and culture in the region. She stressed the importance of its inclusivity to her family, specifically her children, given that their Santa Ana neighbors in the 1980’s included Latinos, Vietnamese, Cambodian, Tongans and Samoans. 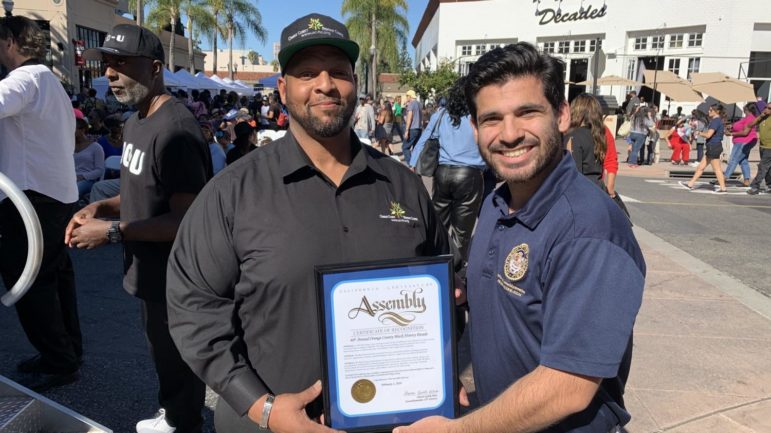 Dwanye “BH” Shipp, left, receives an award from the California state assembly for his work organizing the 2020 Black History Parade in Anaheim.

I met with Dwayne Shipp, also known as “BH” (his former performer name “beats and hooks,” but since changed to “be humble”), the Wednesday before the annual parade. I was invited into his family’s home in the Central City neighborhood of Santa Ana. The Shipp family has resided off Willits and Raitt for over fifty years. Their home and local impact are a testament to the long history of African Americans in Santa Ana and throughout Orange County.

BH, now 44 years old, shared that the first parade started in Santa Ana when he was four years old. The first procession took place off Raitt near the Jerome Center, with just eight people, and his eldest sister Darcel Shipp-Davidson was the first Grand Marshall. Since then the event is not only a Shipp family tradition but it has evolved into a gathering for multicultural families in O.C., the surrounding areas, and former O.C. residents who fly in from across the country for the special day. 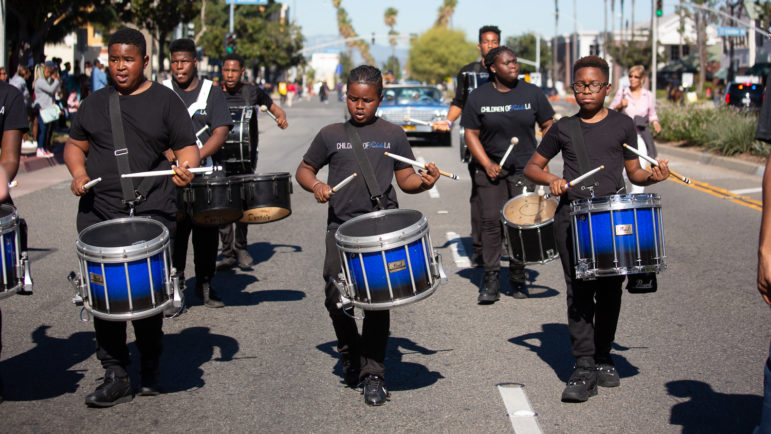 Parade participants at the 2020 Black History Parade in Anaheim. 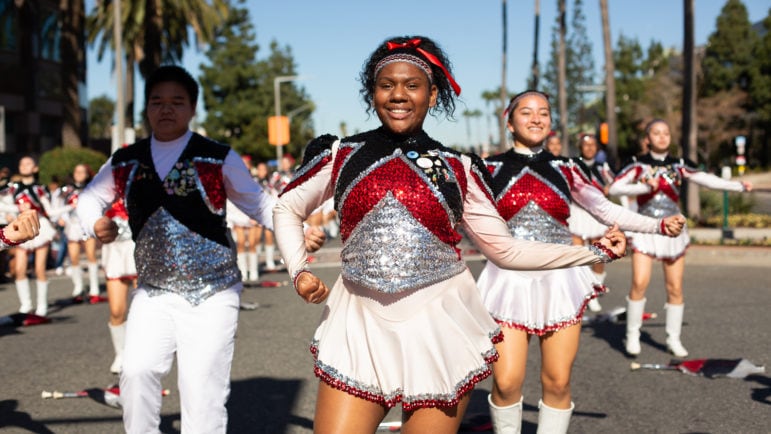 Aliiah Arellano, 17, is a senior at Banning in Wilington. This is her second year performing with her school band and drill team.

“I commend my mother-in-law for doing all of this while raising ten kids. I’ve been coming to this event for over thirty years…it was the Black History Parade but you never felt like it was just about Black history, it was here to educate that we’re all in Orange County…hopefully our family will continue to bring even more cultures and diversity together,” said Barbara Brinson Shipp.

Due to large crowds and a growing number of participants, the parade eventually moved to downtown Santa Ana, off Main Street, in 1986 through 2010. According to the census bureau, Anaheim is home to the largest African American population in Orange County, but that was not the initial reason behind the move to downtown. There were unforeseen circumstances in securing a consistent location and financial commitments via donations and sponsorships between 2010-2012 that led the cultural event there, before the founder’s health began to decline. Helen M. Shipp, wife, mother of ten, and beloved by thousands, passed on January 25, 2018, leaving a legacy hard to live upto for most.

Yet, when BH was called to return home in August 2012 to address the care of his ailing mother, he had no idea he would be leading the parade in 2020 as the president of the Orange County Heritage Council and under the theme, “Celebrating Our Heritage, Embracing Our Past and Building Our Future.”

“At first, I thought I was being punished. I had to stop my life and music career in L.A, to take care of my family and get involved with the community…as kids we were all involved in the parade and as an adult I still attended every year. Now, I only wish I would’ve been around earlier, before my mom got sick, to help her with it all,” explains Shipp. 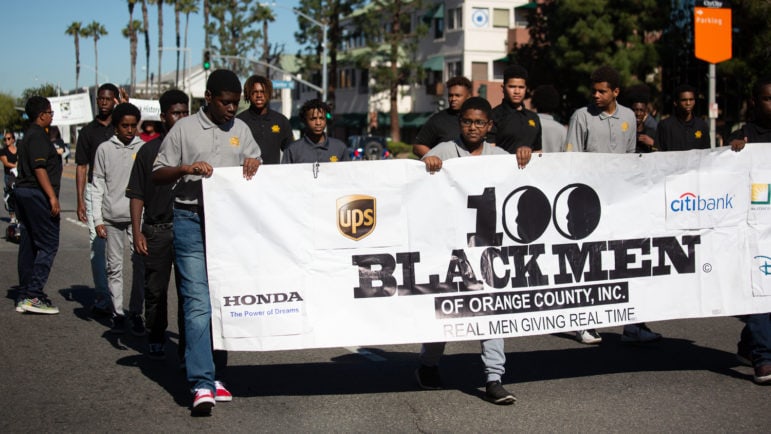 Parade participants at the 2020 Black History Parade in Anaheim.

BH has chronicled the years of the parade through archives that included old photos, childhood memories, and news clippings. After sifting through some of the original pictures featuring Main Street in Santa Ana, I realized Shipp and I had some of the same images in our respective family albums. I had never made the connection that the O.C. Black History Parade was the same parade my family and godparent’s attended through the 1980s.

As first and second generation Mexican-American families in Orange County, my family and the Linnert family (Irish American father and Mexican mother) shared the parade as an annual tradition as well. 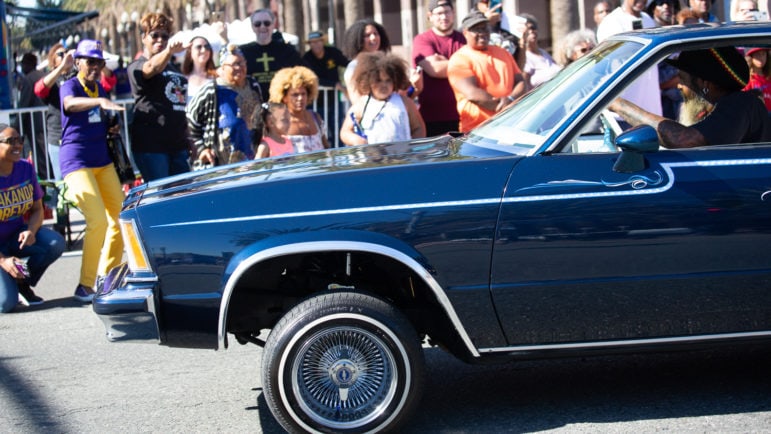 Car and motorcycles clubs were present at the 2020 Black history Parade held in Downtown Anaheim.

“Yes, it was the Black history parade. We went because it was free and it shared so many different cultures, including ours. We learned about Black history and it gave us a reason to get together afterwards. We would have hot dogs or a carne asada and get you kids ice cream,” my godmother and long-time Santa Ana resident Connie Linnert explains to me.

These shared memories speak to the core value that Shipp credits his mother defining into one quote: “Honoring our heritage, praising our present, fortifying our future.” It is in 2020, while Shipp and I are in our mid-forties, that we get to know each other. I now acknowledge it was the African American Shipp family that provided those moments of Mexican-American cultural pride in my own family.

After 40 Years, the Parade Tradition is Stronger than Ever

The multicultural crowds continue to gather, along the Shipp family and with long-term support from devoted African American community members including Shedrick Collins, Melanie Grant and Cathy Steele. United, they have kept the “community in the community” like Helen M. Shipp began in 1980. Through various loyal leaders since 2012, the annual parade and cultural faire has grown to draw thousands of attendees, vendors, patrons and volunteers of all ages to downtown Anaheim.

“I want to be involved in the community because it’s fun meeting new experiences, meeting new people…and this makes us connect more as a community, like every religion, race we all come together as one,” shares Melanie, a Latina from Loara High School and parade volunteer. 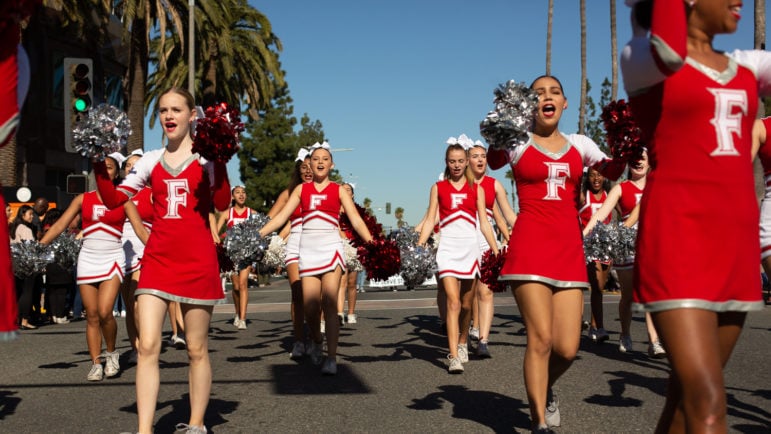 Among the procession following BH and the Grand Marshals, onlookers got a glimpse of officials from all levels of government, police and fire departments, military units and empowering youth performances from all over Southern California, including Anaheim High School, Phineas Banning High School from Wilmington, Children of Production LA Drumline, and local ballet folklorico dancers. Most memorable moments in the two hour march are the Black Women in the U.S. Breast Cancer walkers, D.A.T Krew youth dancers and 100 Black Men of Orange County. Local churches, car and motorcycle clubs, and equestrian units were also represented.

Another tradition that has carried on through the years, as part of the annual festivities, is the distribution of “the book.” The magazine bound publication, also known as the event’s souvenir book, is free to all attendees and includes the years’ theme and a welcome letter by Shipp as the 2020 president of the O.C. Heritage Council. Within the twenty-two pages are congratulatory announcements from local churches, vendor advertisements and a list of participants. 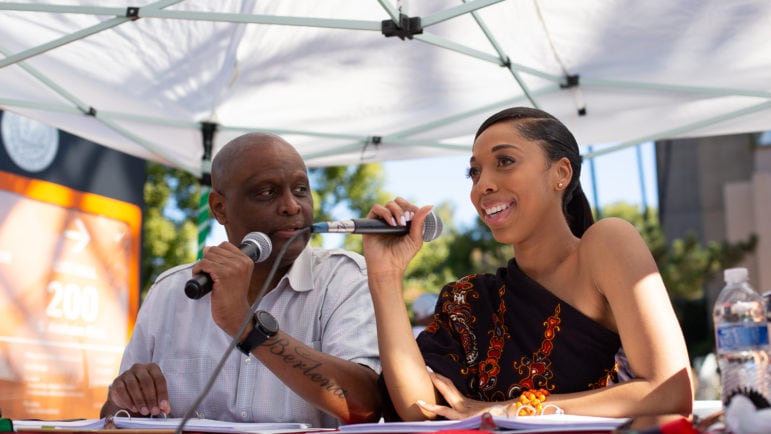 Left, Tyrone Dubose and Ashley Nichole are the hosts of the 2020 Annual Orange County Black Parade in Anaheim.

For the 40th year, there is an abundance of celebrities, from the parade announcers to the performers on three stages. This year, the Grand Marshals were actresses Judy Pace and LisaRaye. Some of the other known names in attendance were Tyrone Dubose, Ana Vergara, DJ Kai, comedian Dexter Smiles, Devante Swing of the American R&B quartet Jodeci, with plenty more mentioned in the book. This list has grown quite significantly from the formative years of the parade near Jerome Park.

“For my generation, it was a place where my teen friends and I gathered as a community of color since we were all from different backgrounds in Santa Ana,” shares Pastor Tony Simon from the New Covenant Church of Orange County. “Now 40 years later I’m on the board and I want the heritage and contributions of African Americans to resonate with folks who are coming to this area, such as having the Second Baptist Church as the oldest Black church, over 100 years old in Santa Ana, and all the pastors who made sacrifices for our community of color.” Pastor Tony Simon also gave the blessing for the opening of the cultural faire on Saturday afternoon.

Not Just a Parade 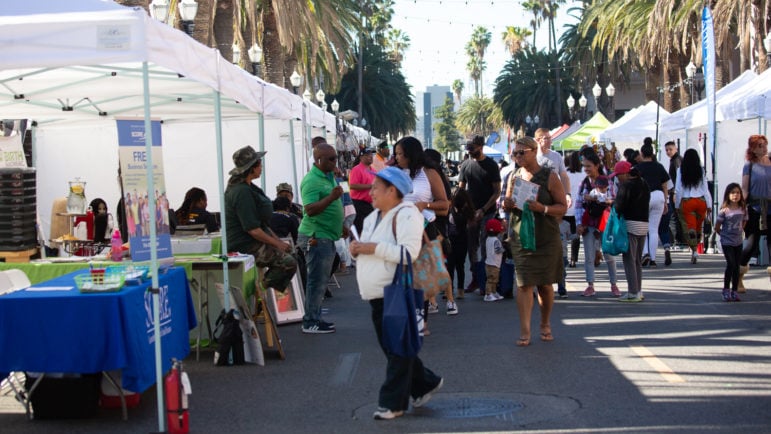 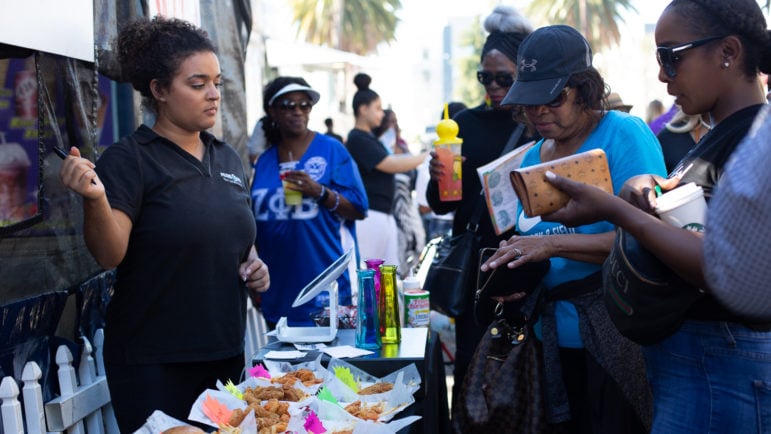 Patrons line up for southern Cajun food booth at the 2020 Black History Parade in Anaheim.

The vendors filled up block after block and offered something for everyone, including: beautiful African tapestries revamped into modern skirts; collaborative efforts like that of House of Mosaic which offered handmade candles and upscaled military jackets by Poet Roni Girl, featuring icons like Frida Kahlo and Nipsey Hussle; and items memorializing Kobe Bryant and his daughter. Food options included Lynda’s African Delicacies food truck.

Like former years, impactful organizations such as the NAACP, Orange County Heritage Council, and OC Learning Black History offered literature, resources and historical references to gain knowledge of the accomplishments and efforts made by African Americans in Orange County and across the nation’s history and present time.

This year, BH decided to add a new tradition of his own to honor his mother’s work. He curated old photos and news clippings into an exhibit sharing the origin, diversity and growth of the parade. Such memorabilia from the last 40 years, including photos of actor Todd Bridges and Martin Luther King, Jr.’s daughter, is framed and displayed as the Orange County Black History Parade 40 Years exhibit in Carnegie Gallery Room C at The Muzeo Museum and Cultural Center, alongside the Historical Society of Second Baptist Church exhibit. Both historical collections are free and open to the public through March 8th, 2020. 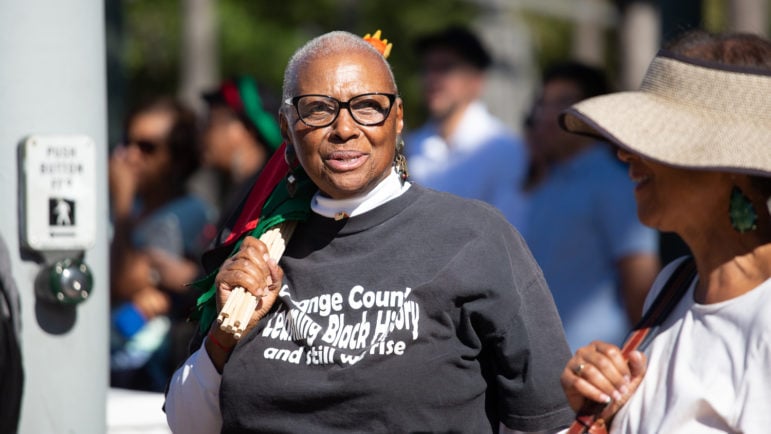 B Jones from the organization Orange County learning Black history, enjoys the parade.

Like many teens growing up in urban neighborhoods similar to Santa Ana, BH always aspired to be in the music industry. Prior to 2012, he went from beatboxing in the halls of Valley High School to living his entrepreneur dream as a music producer and owner of Exclusive Studios in Canoga Park, California. Although he had to return to Santa Ana to continue his mother’s legacy, he considers his experience and philanthropic connections in the music industry as an opportunity to keep building and engaging the younger generations.

He hopes he can continue to contribute to the preservation and promotion of Black culture and inclusivity, while also growing the O.C. Black History Parade and Cultural Faire year after year.

“It isn’t a coincidence I became the president of the O.C. Heritage Council for the 40th year of the parade. My mom had me when she was forty, now I’m carrying her work and I plan to keep it going for all future generations,” said Shipp.

Sarah Rafael García is a contributing writer for Arts & Culture at Voice of OC. She can be reached at [email protected].