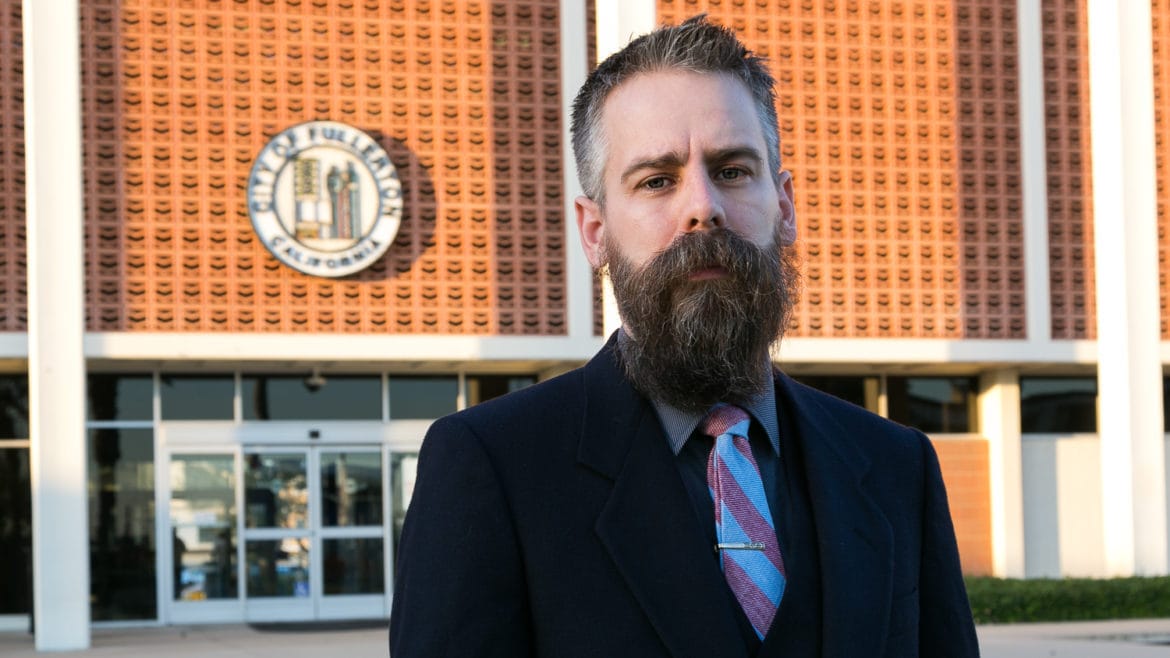 Fullerton resident Joshua Ferguson is trying to get an Orange County Superior Court Judge to throw out most, if not all, of the lawsuit against him for publishing secret city hall documents, including how a former city manager got away with potential drunk driving.

She’s argued in court that Fullerton’s attempt at a publishing gag against the blog and Ferguson violates the First Amendment.

The Fourth District Court of Appeal blocked Delaney’s publishing gag Nov. 7 and movement on the case has been largely halted since then, except for some new filings by Fullerton city attorneys to reduce the number of documents Ferguson allegedly stole.

But the list of files was more than cut in half to when Fullerton attorneys shortened the list to 19 files, according to documents filed by city attorneys to the Orange County Superior Court Nov. 19.

Judge James Crandall will consider different parts of the city’s lawsuit against Ferguson Thursday to determine if it’s a SLAPP.

Aviles has argued Fullerton’s lawsuit is retaliation for a California Public Records Act lawsuit he filed against the city for allegedly failing to disclose police misconduct and other records.

But the city maintains it has complied with records disclosure law and Ferguson, along with other bloggers, illegally accessed and downloaded files from a Dropbox section for City Attorney review before potential public disclosure.

“After being warned that attempting to restrain a news organization from publishing information it lawfully obtained would constitute a prior restraint and a SLAPP, the City decided to allege that the Blog’s conduct was unlawful in a blatant attempt to try to avoid the application of the long line of cases that preclude the City’s requested relief in this action,” reads Ferguson’s anti-SLAPP filing.

Fullerton, in its response to the filing, said anti-SLAPP doesn’t apply to Ferguson’s case.

‘The Defendants improperly seek relief under the Anti-SLAPP statute for activity that is not protected by that code section, namely, their acts knowingly accessing and without permission taking, using and copying data and information from the City’s computer network/file storage-file sharing account in violation of [state law.],” reads the filing.

“Other than the argument of their counsel, which clearly is not evidence, the Defendants produced no evidence in support of their motion to attempt to establish that their accessing of the City’s stored data was somehow undertaken with the city’s permission,” states Fullerton’s filing.

Ferguson’s response, filed by Aviles, contends that Ferguson and the blog’s actions are protected by the U.S. Constitution and the city can’t specifically point to anything illegal because Fullerton accidentally disclosed the records.

“Despite the City’s creative pleading, this case is no different than the hundreds of other cases where an entity has tried to suppress public disclosure on matters of public concern. This is precisely what the anti-SLAPP aims to prevent,” reads Ferguson’s reply.

“The press cannot be punished for possession or publishing inadvertently or wrongfully disclosed documents without running afoul of the First Amendment,” states the filing. “There is no admissible evidence that there was any password protection on the [Dropbox] account. This showing must be made using admissible evidence.”

The blog, Friends for Fullerton’s Future, began posting documents last June from an internal police department investigation detailing how former City Manager Joe Felz got a ride home from Fullerton police officers after drinking and wrecking his car election night 2016. The investigation had statements from officers who were at the scene.

Felz retired December 2016, a month after the crash, and was charged with driving under the influence in early 2017. But that charge was lowered and he pleaded guilty to one count of reckless driving December 2017.

The blog also detailed a potential agreement between Fullerton and former Lt. Kathryn Hamel in an effort to hide any potential misconduct records from public release under the police disclosure law — SB 1421 — that kicked in at the beginning of last year.

Before the city sued Ferguson and the blog over the secret documents, he filed a California Public Records Act lawsuit against Fullerton for allegedly failing to provide police misconduct records, including Hamel and Felz records.

Ferguson requested body camera footage from officers at the Felz crash scene, including former Sgt. Rodger Jeffery Corbett, who gave the former city manager a sobriety test, but not a breathalyzer. He also requested numerous other potential police misconduct records.

Despite an administrative investigation showing Corbett falsified the police report and purposely blew the field investigation in the Felz case, the city refused to give Ferguson records and camera footage to Ferguson, according to the lawsuit.

The Orange County District Attorney charged Corbett Sept. 4, 2018, with one felony count of falsifying a police report about Felz’ crash. Corbett pleaded not guilty last February and he’s scheduled for a pre trial hearing this Friday.

Fullerton denied Ferguson the body camera footage from Corbett and other officers who were there. The city cited an exemption in state law that allows records to be withheld if their disclosure could jeopardize a related investigation, according to the city’s response to Ferguson’s request.

Ferguson’s case has drawn the interest of some state and national First Amendment advocacy groups.

Aviles and attorneys from the First Amendment Coalition and the Reporters’ Committee for Freedom of the Press have likened the publishing gag attempt to the Pentagon Papers.

The Pentagon Papers case started when President Richard Nixon tried to block the New York Times and other newspapers from publishing a classified study about the Vietnam War and the United States Supreme Court sided with the newspapers in 1971 and allowed publishing the study.

The 7,000-page study was leaked to the New York Times, the Washington Post and other newspapers earlier that year by Daniel Ellsberg, a military analyst for the RAND Corporation. It showed the history of U.S. involvement in Vietnam starting in World War II until 1968, when there were over half a million troops in Vietnam. It was also the deadliest year during the war that saw nearly 17,000 troops killed.

“The dominant purpose of the First Amendment was to prohibit the widespread practice of governmental suppression of embarrassing information. It is common knowledge that the First Amendment was adopted against the widespread use of the common law of seditious libel to punish the dissemination of material that is embarrassing to the powers-that-be,” wrote Justice William Douglas in his opinion on the Pentagon Papers case.

Douglas sided with the newspapers.

Katie Townsend, executive director for the Reporters’ Committee for Freedom of the Press, previously told Voice of OC she’s never seen a legal argument like the case Fullerton is making against Ferguson.

“It’s not an argument that we’ve seen before. It’s a novel argument — a novel reading of the [state and federal computer laws],” Townsend said. “The idea that journalists or bloggers are going to be prosecuted for ‘hacking’ for basically accessing or looking at folders in a Dropbox folder they were given access to, is bad.”

Kimberly Hall Barlow, a Fullerton city attorney working on the case, argues the city lawsuit is different from the Pentagon Papers case.

“I’m a huge defender of the First Amendment. I wouldn’t be involved in this case if I thought we were crossing a line,” Barlow said. “I’m doing what I believe is a righteous thing in protecting people’s data.”

“The entire theory of their case is deeply, deeply troubling,” Townsend said. “The idea the blog was hacking isn’t what happened, factually.”

David Snyder, executive director for the First Amendment Coalition, previously told Voice of OC that the United States Supreme Court has never upheld a judge’s decision to block the publishing of documents.

“The colonists were familiar with licensing of printing presses. The crown had the ability to license printers … that meant if you pissed off the king or the queen, they would revoke your license and you can’t publish,” Snyder said. “One of the purposes of the First Amendment was  to get the government out of the business of deciding who can or can’t publish.”