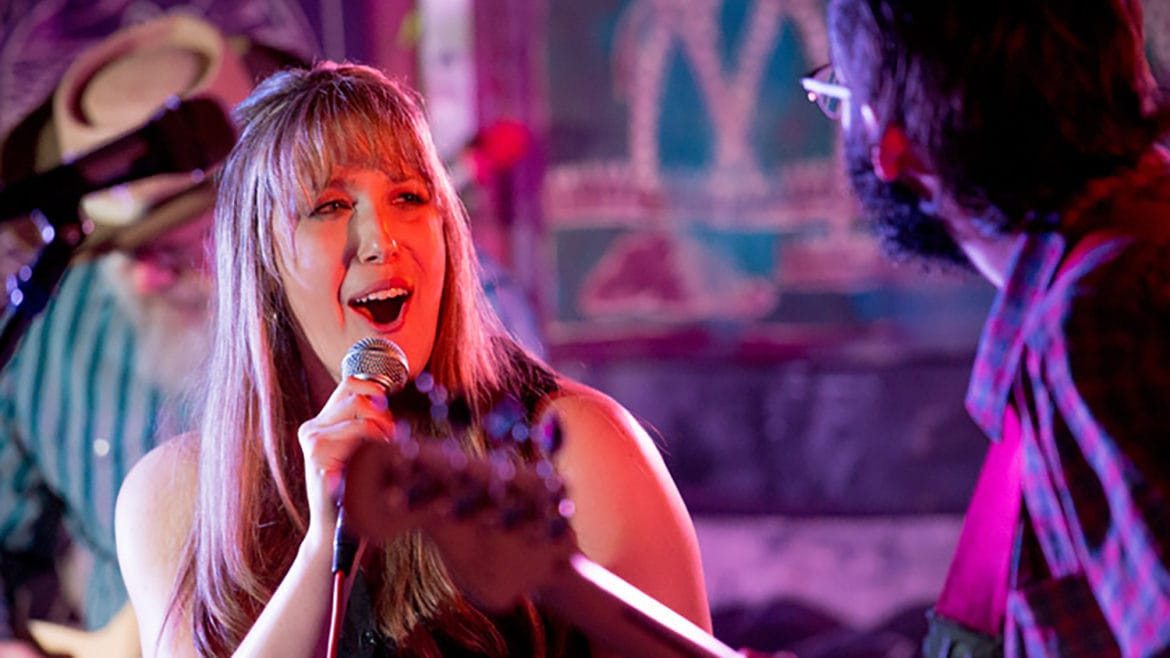 Playwright, actor, and musician Joanna Garner performs in the first iteration of her play with music, "100 Heartbreaks."

SUITABILITY: Ages 13 and up

How many artists would be willing to have their hearts broken 100 times for the sake of their art?

That’s the question that powers “100 Heartbreaks,” a play with music by playwright, musician and songwriter Joanna Garner.

To launch the 10th year of its OTR (On the Radar) New Works Series, Chance Theater, Anaheim’s resident theater company, is unveiling a staged reading of the show. Garner’s original drama with music is about a country singer-songwriter who sets an unusual goal for herself: deliberately setting out to get her heart broken enough – 100 times, to be exact – to be so sad as to be able to write the “perfect” country song.

The Anaheim company and Garner have had a close working relationship since 2018, when she was Chance’s resident playwright.

James McHale, Chance’s literary manager, said that Chance “first became aware of Joanna when another of our resident playwrights, Jenny Connell Davis, recommended her to us. Jenny had worked with her at the University of Texas, and passed along Joanna’s play, ‘The Orange Garden.’ We loved the play, particularly the themes it was exploring and how the story was giving a voice to characters we don’t see on stage often.”

McHale said the Chance’s staff got in touch with Garner, they hit it off, and she agreed to be the resident playwright for 2018.

During Garner’s time with Chance, the company said that her “daring spirit and skilled language make her an emerging voice in the American theater landscape.” The theater supported the development of her work by producing a staged reading of “The Orange Garden” and a Chance LAB workshop of “Gutting,” a new play Garner was in the process of developing.

McHale describes Garner as having “an eclectic body of work as a playwright, ranging from bold theatrical pieces that explore the darkest sides of human nature (like ‘Gutting’) to a more lighthearted country musical (like ‘100 Heartbreaks’). However, a fresh musicality always seems to be a part of her storytelling.”

“She’s a musician herself – she wrote the music for ‘100 Heartbreaks’ – and I remember that it was important to her that music was incorporated into the LAB workshop for ‘Gutting.’”

Although “100 Heartbreaks” isn’t a musical in itself, McHale notes that Garner “knew that music could better communicate the dark, unsteady tone” of the script – so she wrote an original score Garner says is “all old-school barroom honky-tonk in the vein of Loretta Lynn, Johnny Cash and Patsy Cline.”

The Chance workshop production of “Gutting” featured singer-actor Katie Canavan. Garner and the folks at Chance, including director Lola Kelly, were impressed with Canavan, so they’ve cast her to play big-haired, sweet-voiced country darling Charlane Tucker for the March 4 staged reading. Garner said it’s the first time someone other than herself has played the role, a fact she said will provide invaluable objectivity “in helping take the play to the next level.”

Garner describes the story’s lead character as “an aspiring country singer who doesn’t think she has enough country cred to be taken seriously in Nashville, so she decides to get her heart broken 100 times to suffer enough to be truly country.”

The play is set in a honky-tonk bar called the Horseshoe Tavern, where Charlane is in the midst of her live show as the story begins. The audience for the play serves as the crowd attending Charlane’s set, which Garner says “goes hilariously off track” when a past fling unexpectedly turns up.

From a Solo Show to a Full-Fledged Play

What’s perhaps most intriguing about the “100 Heartbreaks” is how it combines and showcases Garner’s diverse skills, and also the way in which it gradually evolved over a period of 12 years from a solo show to a full-fledged two-act play.

Garner began her career as an actor and musician, performing in Seattle for a few years after earning her undergraduate degree in acting at Central Washington University. “I got tired of the rat race of auditioning, so I decided to try writing a piece for myself to perform. ‘100 Heartbreaks’ actually started as a one-woman show, which I performed for a successful run in Seattle. 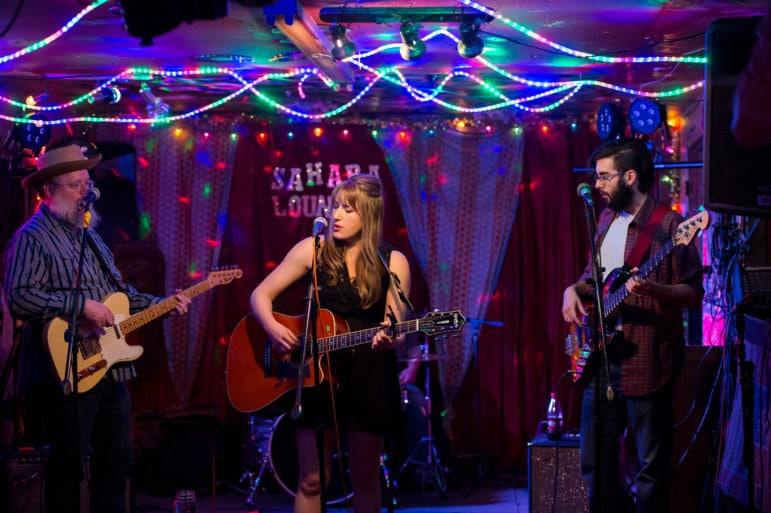 Playwright, actor and musician Joanna Garner performs with her band in the first iteration of her play with music, “100 Heartbreaks.”

“Performing that part was great, but I really loved the writing process. I’d been a music journalist for the Seattle Times, so writing wasn’t a new way of expressing myself, but it was really exciting to think, ‘What do I care about? What is worth sharing with the world artistically?’”

Setting her sights on playwriting, she decided to go to graduate school at the University of Texas at Austin. “That opened my eyes to so many new artists and styles and started me on the path of making more immersive and interactive work.”

As it turns out, “100 Heartbreaks” was Garner’s first full-length play, “though it was very different then. It really shows how long it takes to develop plays, especially musicals, that I’ve been working on this play for over a decade!”

As the show revolves around the world of country music, music is naturally integral to its telling. Garner said she always writes the lyrics and sometimes the music, too, for her various shows “in collaboration through the years with some amazing musicians. Being a musician means that sometimes I start a play from the music: from songs I’m writing or just from a general soundscape. Then the sound of the world really unfolds the story. I’m more interested in writing plays with music as part of the experience as opposed to (writing) traditional musicals.”

Garner said the show’s origins “definitely started as I fell in love with country music and had a crisis of conscience: ‘What right do I have to perform this music? Have I suffered enough to do so?’ The play was born of me questioning that – and, of course, of my dating a ton in Seattle. I’ve had lots of dates and have used them as fodder for not only this play but others I’ve written. This play takes the idea to an extreme and puts an absurd number on it.”

The show was workshopped in Seattle Repertory Theatre’s New Play Program, with the Northwest Playwrights Alliance, and with other Seattle-area theaters. From there, Garner took it to Austin, where it was presented at Bumbershoot, the country’s largest arts and culture festival. It then made its world premiere at the Sahara Lounge in Austin, where it was nominated for an Austin Critics’ Table Award for Outstanding Musical.

A Story About Not Giving Up, Despite the Odds

Garner said the version Chance audiences will see is “a brand-new one that no one has seen.” The last full-scale production was in Austin in 2015. Garner said she hasn’t worked on the script or music much since then and is relishing having an entire week here in Orange County to rewrite, polish and tweak it before it opens.

The ideas for her plays, Garner said, often come “through place. I see the setting first and want to bring that world to life. ‘The Orange Garden’ was born from hearing my dad’s stories of living in Iran. ‘Please Open Your Mouth’ came from the idea of a bizarre supper club. ‘Wild Places’ started because I just had this image of a play set on a giant trampoline.”

“Once that world gets into my head, I start to ask, ‘What happens here? What questions could be explored here?’”

Garner said that “seeing an audience connect with the story and with each other” is what keeps her going as a playwright. “I love creating (a) spontaneous community and then seeing that community take the journey together. It’s one of the main reasons that I feel so lucky to have a career in immersive entertainment.” In addition to her playwriting, Garner is the senior narrative director for Meow Wolf, a Santa Fe-based multidisciplinary art collective, which “allows me to create enormous explorable stories within large-scale exhibitions. That work fuels my playwriting and vice-versa.”

As the music director of “100 Heartbreaks,” Chance’s Bill Strongin will lead a group that represents the Horseshoe Tavern’s stellar house band. The musical core of between 17 and 20 original songs is played on guitar, bass and drums plus Charlane’s work on rhythm guitar.

The theater’s press release says the production gives audiences “a front-row seat for a night of whiskey-fueled drama” and calls the show “a story about not giving up, despite the odds” and “a raucous send-up of — and love song to — the good ole days of country music.”

Garner sees nothing but positives in the artistic synergy that has developed between her and Chance Theater.

“They are such an incredibly supportive organization that really believes in artists, and because of that (they) draw in such generous, talented artists. They’ve let me take huge risks and have always said ‘Yes! Try that! How can we help?’”

“The plays I’ve developed there grew exponentially because of the collaboration. I’ve really come to feel like Southern California, and especially Chance, is a true artistic home for me.”