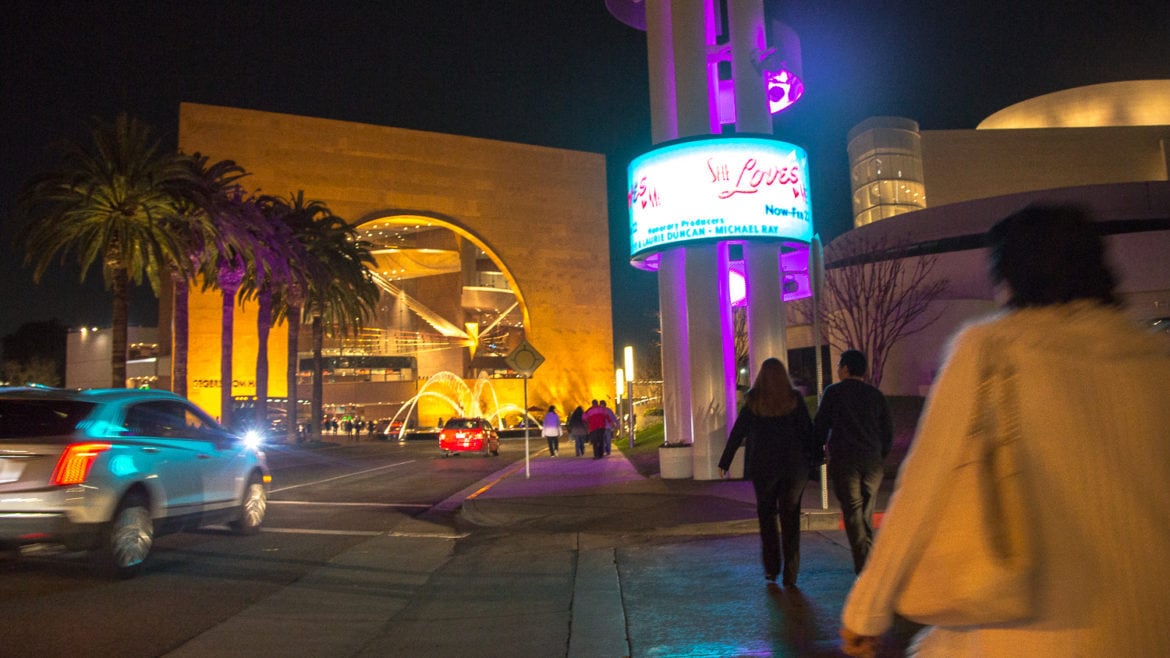 Segerstrom Center for the Arts and South Coast Repertory serve as anchors on the arts campus in Costa Mesa.

For theater, change is in the air — new leadership, demographic shifts, shifting tastes and habits as technology alters the way we interact with our world.

A couple of major staff turnovers at O.C.’s largest arts institutions could vastly enrich what we see on stage over the next few years.

At South Coast Repertory, artistic director David Ivers, who was hired in late 2018, brings a fresh entrepreneurial sensibility and his own predilections to a theater that, from its beginnings in 1964, has been controlled and molded by its two founders, Martin Benson and David Emmes. (The troubled tenure of Marc Masterson as artistic director didn’t really change the status quo at SCR. Ivers seems like a more assured and logical choice to carry the baton.)

Products of the mid-century blossoming of American regional theater and influenced by the lively postwar theater scene in San Francisco, Benson and Emmes are part of a generation that made certain stages across the country a worthy artistic counterweight to theater in New York. They fostered new talent, pushed serious work into the mainstream, and reinterpreted the classics in countless inventive ways.

But their generation has largely passed. Indeed, Benson and Emmes are among the last founding administrators from that era who are still active. So what will South Coast Repertory look like as Ivers (and, undoubtedly, others of his generation who will be brought aboard) begin to imprint their vision more firmly on the theater?

Benson and Emmes were self-described “word guys” and devotees of the well-made play — tightly constructed spoken-word scripts with traditional structure (although they certainly let others stray from their path). Shaw, Shakespeare and other giants were regular visitors to SCR’s stages, although the productions of bold experimentalists such as director Mark Rucker certainly stretched the aesthetic boundaries of certain classics. The playwrights nurtured early in their careers by SCR during Benson and Emmes’ tenure were generally not part of American theater’s avant-garde, even though some turned into important voices: David Henry Hwang, Craig Lucas, Richard Greenberg, Donald Margulies.

At the end of last year, it seemed like every beat journalist in America was making grand summations of the previous decade. We opted not to follow that trend. Instead, the arts team at Voice of OC has decided to look ahead and make some predictions about what’s going to happen in Orange County between now and the end of 2029.

We start with a look at two of the biggest players in the local theater scene.

Benson and Emmes were also known as stay-at-home types, unlike many directors of regional theaters; they weren’t that interested in carving out national or New York careers for themselves. They concentrated on doing most of their work in their own home, and carefully built it into a reflection of their tastes and values.

Ivers, who has held top jobs at major theaters in Utah and Arizona, is more solidly connected to other regions, as well as New York; he’s also an experienced teacher of theater with a long list of academic affiliations at major universities around the country. He wants SCR to have a larger national reputation, and he’s already making some headway.

SCR recently announced a creative partnership with Playwrights Horizons: the Pinnacle commission, which will periodically grant $60,000 to a major American playwright for a new work. That high-profile collaboration with a prominent New York company will undoubtedly make O.C.’s flagship theater a more prominent presence on the East Coast. (In the past, there was quiet but persistent grumbling from SCR about getting short shrift time and again in the Big Apple for its contributions to theater, despite its regional theater Tony Award.)

Ivers also seems more interested in something that Benson and Emmes largely avoided: traditional musicals. His directorial debut at SCR this month is a production of “She Loves Me,” a charming Golden Age Broadway show. A safe bet for the next decade is more mainstream musicals on the main stage.

Musicals may also provide a strong connection between SCR and its next-door neighbor, the Segerstrom Center for the Arts. In the 34 years since the performing arts center opened, the two institutions have kept a respectful and wary distance from each other. SCFTA rarely brought in spoken-word plays; SCR never attempted blatantly commercial musicals (partly, of course, because of the economics of big-budget musical theater — SCR’s 507-seat main stage is too small to make an elaborate and costly musical financially viable).

But now, there’s a new boss at SCFTA who might like musicals even more than Ivers does: Casey Reitz. And the two men share backgrounds that have some similarities. Could there be some form of collaboration between the two institutions involving musical theater? It’s too early to tell — but Reitz and Ivers have reportedly already taken a meeting. That’s significant, because cross-plaza business relationships were almost never pursued during the Benson/Emmes era.

It’s a safe bet that Reitz will bring his strong theatrical credentials to bear on his new theater complex. He worked as executive director for nine years at New York’s Second Stage, which included a Broadway house, the Helen Hayes Theater. Before and during his tenure, his theater’s track record as an innovator has been impressive, with an emphasis on emerging creative talent and groundbreaking musicals. It staged the New York premiere production of “Dear Evan Hansen,” which won six 2017 Tony Awards, and the world premiere of “Next to Normal,” which garnered three 2009 Tonys.

During a recent conversation with Voice of OC, Reitz hinted at the possibility that SCFTA would develop new musicals at some point.

“Producing (our own musicals) is one of the things that will call attention to us from outside of O.C.,” Reitz said. “This is why a lot of people in New York know the La Jolla Playhouse or the Old Globe or Berkeley Rep. If we could become that kind of place, I think that would be great.”

Reitz didn’t talk about how to finance such an ambitious undertaking; Broadway musicals frequently run up development costs well north of $10 million. All major musicals have many producers, and there’s no doubt that Reitz has the professional connections and fundraising experience to put together such a consortium, if he so desires. It would represent a sharp departure for an arts institution that has spent most of its time as a presenter rather than a producer, although its relationship with American Ballet Theatre is changing that equation.

Perhaps the biggest challenge facing theater and other performing arts over the next decade is figuring out how to capture and sustain new audiences.

Recent research conducted by the National Endowment for the Arts shows that although only a third of U.S. adults attend cultural events in person, about 71 percent say they watch and listen to cultural products on the Internet, using sources such as Spotify, YouTube and Instagram. It’s not a decline of interest that’s endangering theater and other performing arts — it’s the temptation of staying home.

And there are other head winds that will grow over the next 10 years as well.

“At a fundamental level, arts organizations are grappling with how to remain relevant in a rapidly evolving society,” said Emiko Ono, program director of performing arts at the Hewlett Foundation. “Technology has radically transformed when, where, and how people engage in the arts. Arts organizations know they need to adapt, but they’re still figuring out the best way to do so. We are seeing a lot of experimentation in the field to try to inspire public engagement with the arts.”

In his recent interview with Voice of OC, Reitz acknowledged that old revenue models and marketing approaches for the performing arts need some fundamental rethinking. Season subscriptions are on the decline at many regional theaters. Changing demographics in most urban areas (including Orange County, where more than half the population is now either Latino or Asian) will force theaters to find content that attracts a different kind of patron in order to stay solvent.

SCR and the Segerstrom Center have been significantly diversifying their programming, as have most major local arts groups. And they’re adding value and appeal to the live-arts experience. Last fall at SCR, a production of “American Mariachi” featured live mariachi bands playing before many performances. In the Segerstrom Center’s large new public space, Argyros Plaza, frequent free performances are designed to appeal to a wide variety of groups and subcultures.

Expect this kind of creative marketing and generous outreach to expand at O.C.’s Costa Mesa arts campus, especially after the new Orange County Museum of Art opens its doors (and inaugurates another public performance space on the east end of Argyros Plaza) in the fall of 2021. Smart arts leaders know that the time has come to adapt — or die. That attitude, more than anything else, will profoundly influence what we see on stage over the next 10 years.

Smaller O.C. theaters are bound to grow in size and influence over the next decade; Anaheim’s Chance certainly comes to mind. We’ll leave those predictions to fellow stage writer Eric Marchese in a separate article next month.