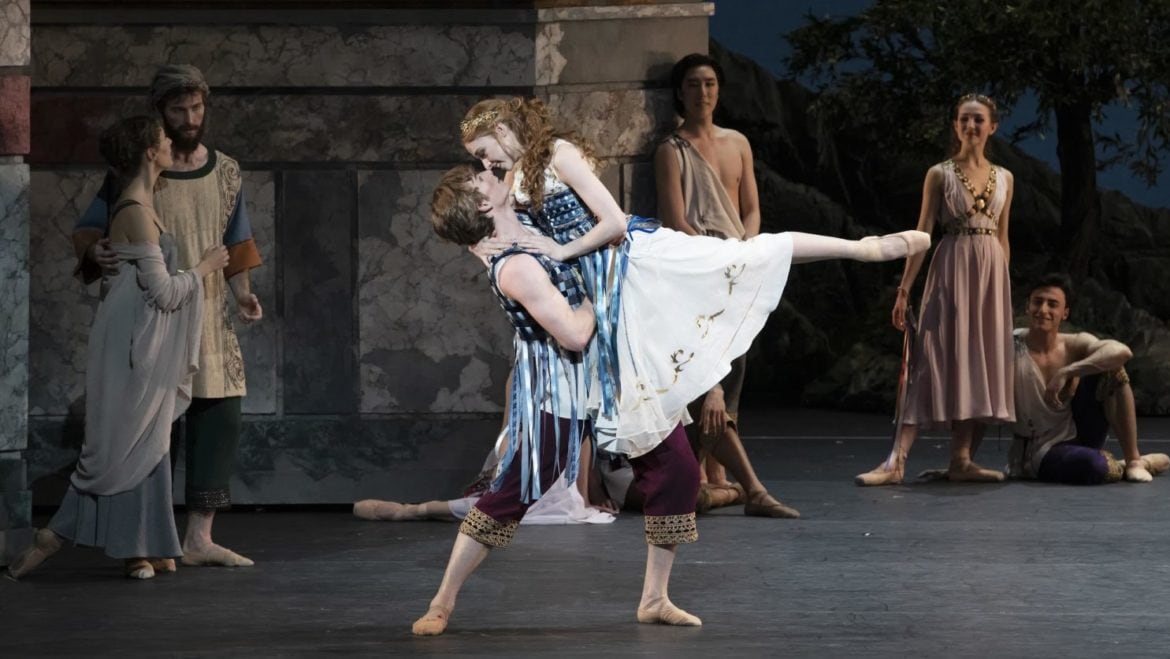 Editor’s Note: We give our arts critics the latitude to state their opinions of the work they review, and we know they must address many complex and sometimes controversial aspects of an artist’s choices; we also recognize that sensitivity must be exercised in describing them. While Voice of OC might take issue occasionally with the way our critics tackle such challenging subjects, we nevertheless grant them the autonomy to make those decisions. We believe the proper forum to debate them is in the comments section

Rousing and sincere, out-sized and fiery, “Of Love and Rage” has much in common with the masculine ballets that were the crowning achievement of Soviet-era classical dance.

But because it comes from the mind and eclectic artistic experiences of Alexei Ratmansky, American Ballet Theatre’s in-house choreographer, this original production that had its world premiere Thursday night at the Segerstrom Center is classy entertainment. It’s extra-sweet candy, but made from organic ingredients, if you will.

On opening night, ABT’s dancers fired up their acting chops and muscular charm, as they have with all the ballets Ratmansky has made for them since his 2009 appointment. It was especially thrilling to watch the elevation of young stars-in-waiting Catherine Hurlin and Aran Bell, who believably portrayed the central couple, lovers who unite at first sight and then allow passion’s ugly underside to tear them apart. Hurlin and Bell have a fresh, innocent aura, which serves a story that, if it is to work, must contrast them with the world-weary and scheming characters. Our heroes must stand apart, in roles that are emotionally and athletically taxing, and how nice Hurlin and Bell possess that depth and strength.

This 2,000-year-old story, from an early novel called “Callirhoe,” must have been a bear to adapt. Think “The Iliad” and you have some idea. We travel across the Hellenic world, from Syracuse (Sicily), to outside Athens, to Babylonia. Our heroine and hero, Callirhoe and Chaereas, meet, fall in love, marry, then fight; she dies, is entombed (but is not really dead), is kidnapped by grave-robbing pirates, sold into slavery, remarries … and that’s before act one concludes. 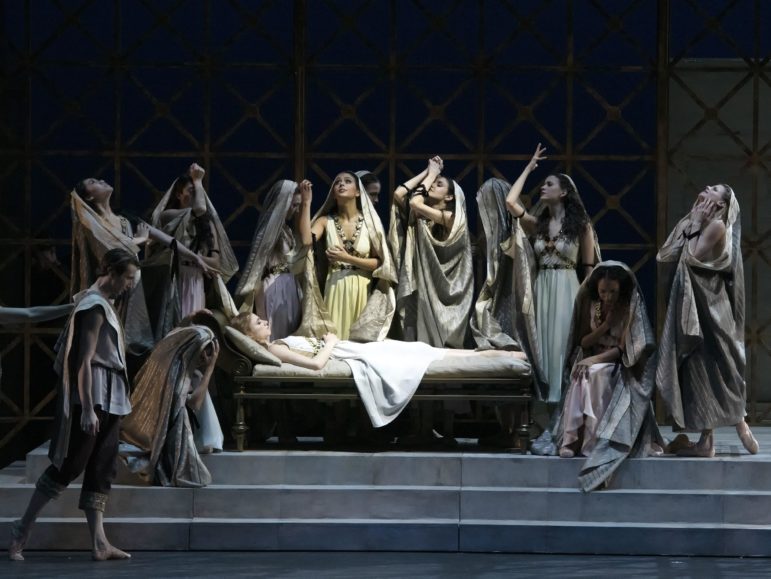 Catherine Hurlin, as Callirhoe, only appears to be dead as the people of Syracuse mourn in American Ballet Theatre’s world premiere of Alexei Ratmansky’s “Of Love and Rage.”

Ratmansky and dramaturgist Guillaume Gallienne pared every detail so that a theme of love and redemption forcefully emerges. Composer Philip Feeney built a score out of music Aram Khachaturian wrote in the late 1930s for the first national ballet company of Armenia. He added some piano selections and, voila, a cohesive musical work emerges that underscores “Of Love and Rage’s” twists and turns. The Pacific Symphony, led by ABT conductor Ormsby Wilkins, enlivened Khachaturian’s rich passages, while ABT pianist Jacek Mysinski impressed with gorgeous playing.

Matching movement to music is where Ratmansky shines. He takes best advantage of all the musical cues; if he were a surfer, he’d know how to pick the perfect curl and ride it flawlessly. When Callirhoe’s second husband Dionysius is angrily debating with rival Mithridates (James Whiteside and Cory Stearns, both excellent), their back-and-forth solos echo a competition among the orchestra’s instruments. The final love duet, when Chaereas begs forgiveness, is performed to the soulful “Gayane Adagio” (perhaps familiar to fans of “2001: A Space Odyssey”). And what better music to depict the climactic battle than the “Sabre Dance”?

For the most part, Ratmansky hews to a classical vocabulary, but he pulls from its encyclopedic range to drive the action. He gives his leading characters signature movement characteristics. The ballet is awash in male pyrotechnics, from stag leaps and fast a la seconde turns to tricky beats. The company response was electric, with high-soaring moves from Tyler Maloney, as Chaereas’s buddy, and from a special solo for Sung Woo Han. But there are also layered frozen poses that recall ancient friezes, pumping arms and folk dancing. Ratmansky is less creative for his ballerinas, though the 12-women (dancing) chorus is effective at signaling woe, delight and every other appropriate response. 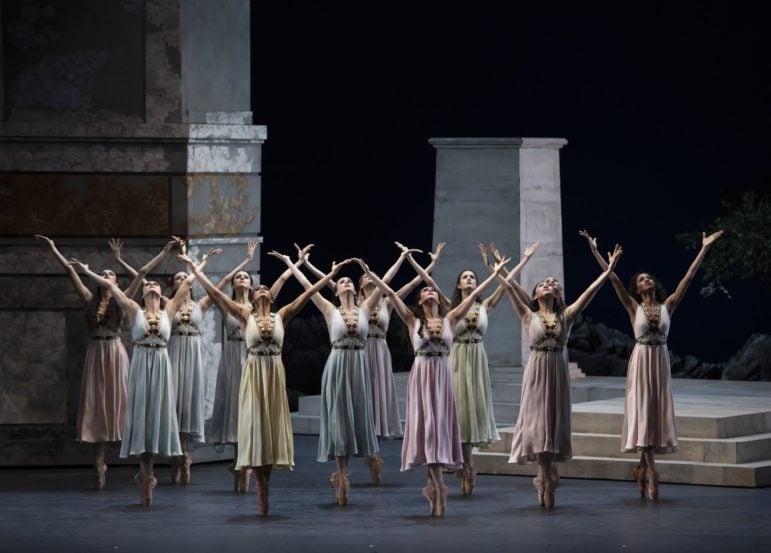 The all-female Greek chorus appeals to the gods in American Ballet Theatre’s world premiere of Alexei Ratmansky’s “Of Love and Rage.”

The one misstep is a hand-flapping, pseudo-shimmying group number that is pure Broadway-esque filler and familiar from Yuri Grigorovich’s Bolshoi repertory. Was that an inside joke? It would not be missed if it mysteriously disappeared.

Designer Jean-Marc Puissant’s large columns, craggy rocks and speckled buildings were weighty scene-setters, and that pirate ship was a beauty. His costumes were hit-and-miss; the Syracusans’ simple dresses and tunics suggested some interest in authenticity, but the evening gowns of Babylonia were from a different ballet. The queen’s wig and getup made her look like a Busby Berkeley chorus girl.

Dancers in secondary roles were also notable: Roman Zhurbin as the King and Callirhoe’s father; Courtney Shealy as scheming Plangon; and especially Luciana Paris as Callirhoe’s maid. Back to our heroes: Bell demonstrated assured partnering skill, balancing Hurlin with one arm. Thanks to his emotional truthfulness, he turned a flawed character into someone we could root for. Callirhoe is a bit one-note, and there’s probably more that Hurlin, who has both suppleness and steeliness, can do to make her more than the helpless beauty.

Laura Bleiberg is a contributing writer for Arts & Culture at Voice of OC. She can be reached at [email protected].