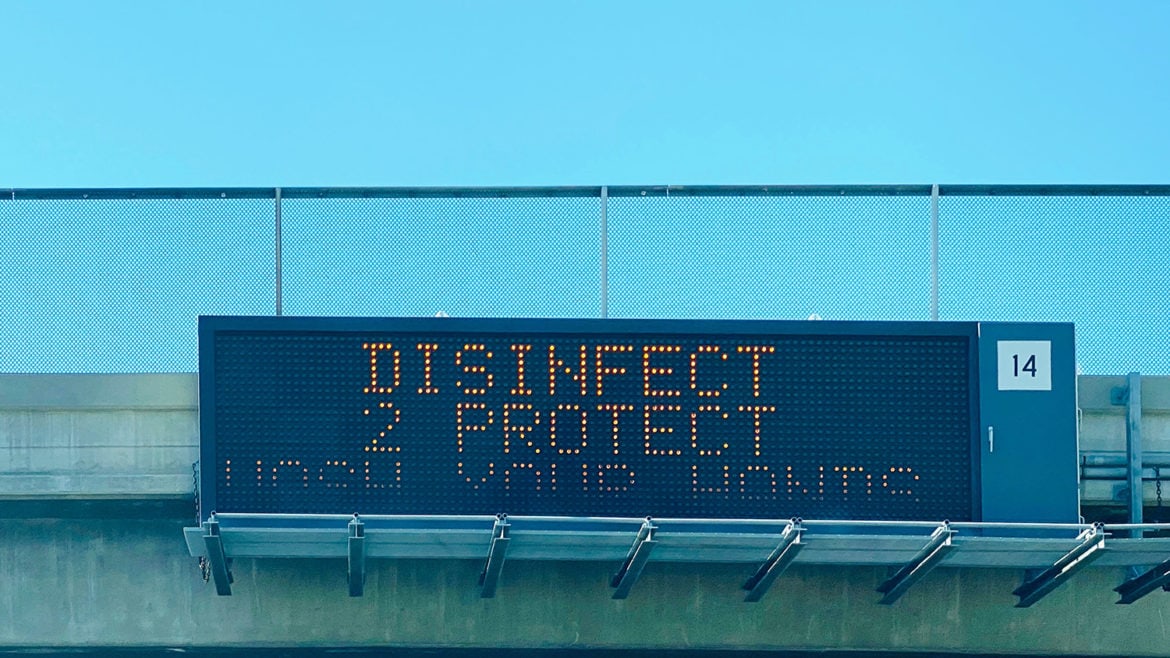 A freeway sign encourages people to take measures to limit exposure to COVID-19 on 5 freeway in Irvine on March 17, 2020.

People can go to work in Orange County and businesses are encouraged to keep operating, county officials said late Tuesday, while acknowledging a health order they issued earlier in the day was poorly worded and caused widespread confusion.

County officials said the intent was for businesses to remain open while practicing social distancing guidelines from the state that ask people to stay six feet from each other to slow the spread of coronavirus. Officials plan to change Tuesday’s order on Wednesday to reflect that, while still requiring closure of bars and restaurants, except for delivery or pick-up service.

“Unfortunately, the order as written caused wide-spread confusion,” county officials said in a news release at 7:15 p.m. Tuesday, about four hours after they released the initial order.

Soon after the order was issued around 3 p.m., Voice of OC sought answers from county spokeswoman Molly Nichelson – the official public information officer for the County’s Emergency Operations Center – about how the order would function in practice, who declined to explain the order beyond its text.

“The order was poorly worded and is being re-worked. We are not closing all businesses,” county Supervisor Don Wagner said in a text message to a Voice of OC reporter late Tuesday night.

“We want businesses to operate, but we want them to do it safely within the guidelines that were issued by the state,” Kim added, referring to guidance that emphasizes 6-foot separation between people, among other measures.

Tuesday’s order was not intended to limit anyone from checking on parents or elderly neighbors, he added.

“The county will be issuing an amended health order tomorrow,” Kim said. “The purpose of that is to clarify that in Orange County, we are encouraging businesses to remain open” as long as they follow the state guidelines. (Those guidelines are available here.)

Tuesday’s order stated that public and private gatherings were banned in Orange County, with a long list of exemptions allowing people to continue getting food and other services, as officials joined other California counties seeking to slow the spread of coronavirus.

The order stated, “All public and private gatherings of any number of people, including at places of work, occurring outside a single household or living unit.”

The order said people could continue to perform “essential activities,” including:

[Click here for the full Tuesday order, slated to be changed Wednesday.]

“We are taking these mitigation steps in line with a directive issued by Governor Newsom to help slow the spread of COVID-19,” said Dr. Nichole Quick, the county health officer who issued the order, in a statement released with it by county officials.

“We recognize community members may experience anxiety related to the social disruption caused by COVID-19, and want to encourage residents to reach out to loved ones using appropriate methods like telephone, video messaging, email and text.”

Officials emphasized Tuesday that the food supply chain is okay, and that grocery stores will remain open. Even in nations hit hard by coronavirus – such as Italy – grocery stores, pharmacies and banks have remained open with access to food.

For now, the Orange County order lasts until the end of the month, though officials say it can be extended and changed at any time and have indicated that’s likely. Experts advising the White House said they do not expect coronavirus’ spread to slow down in the U.S. until July or August at the earliest, and on Tuesday county officials said it will be at least another two months.

The measures come as communities across the nation and around the world seek to slow the spread of a virus that infectious disease experts say could kill 2 million Americans if nothing is done.

The emphasis on “social distancing” – people staying at least 6 feet from each other – stems largely from research on measures credited with significantly reducing deaths in St. Louis during the 1918 Spanish flu pandemic. The new coronavirus spreads from person to person, and infections can double every few days.

As of 4 p.m. Tuesday, officials reported 29 people had tested positive for coronavirus in Orange County, though officials say the true number will rise as more testing is performed because testing has been rationed amid short supplies.

Eight of the Orange County cases were believed to be acquired locally as of Tuesday evening, up from four as of Monday evening.

The pace of new coronavirus cases in China have slowed significantly since social distancing and other health measures were put in place about two months ago.

The Orange County order is modeled on moves by seven Bay Area counties, whose orders went into effect at midnight after they were issued. The Bay Area has had significantly more coronavirus cases than OC, though the number of known cases in OC has been ticking up – to 22 as of Tuesday morning – as more testing is performed.

Quick also urged the public to stay in contact with people currently being isolated, saying it was important to maintain social contact. Health officials at the federal, state and local level have urged the public to keep six foot separation from others as much as possible.

After days of concern about empty shelves at certain grocery stores, health officials said Tuesday the food supply chain is ultimately fine and called on the public to not buy more than necessary.

There’s temporary shortages at stores, but “what we’re hearing is, the supply chain is not the issue,” said Kim, the county CEO.

“I do not believe [grocery stores will close], because people need food. That’s an essential,” Sanchez said.

Several county supervisors, such as Wagner, publicly questioned Tuesday morning whether Quick should issue such a health order, pointing to the concerns it will generate.

Wagner questioned Gov. Gavin Newsom’s recent direction, criticizing the state capital saying, “they make it up as they go along in Sacramento.”