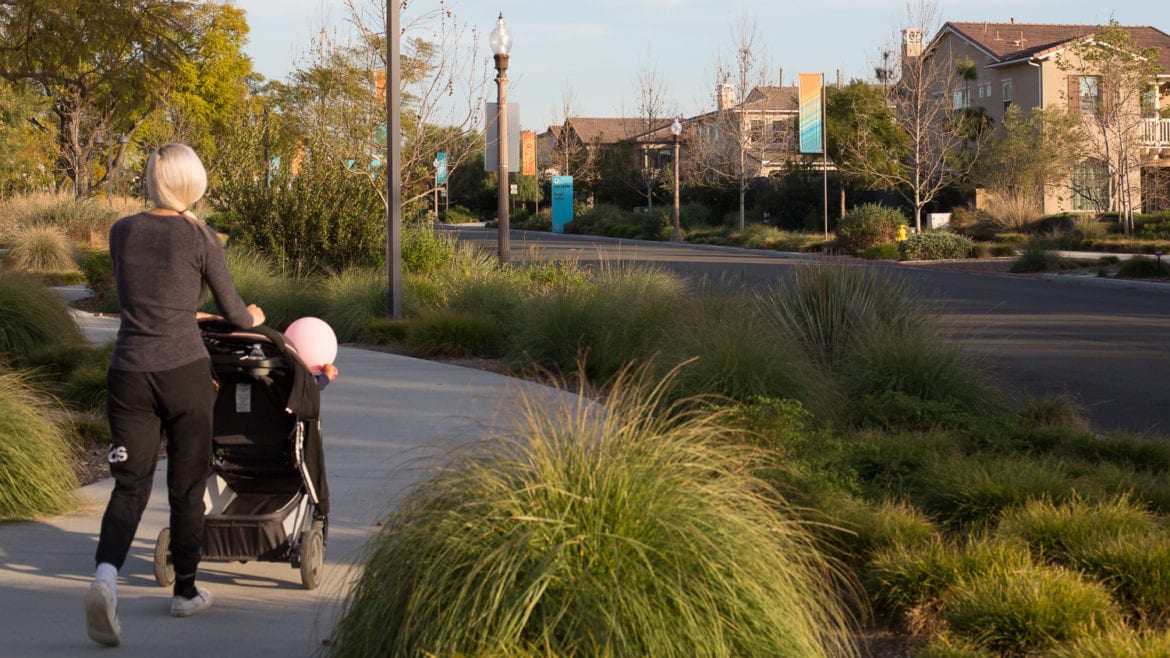 A trail in the Great Park area.

This is Article 3 in a series examining transparency questions around hundreds of millions of extra tax dollars homeowners pay to finance the Great Park.
Article 1: The Great Park Tax: How Irvine Homeowners are Paying for the City’s Big Dreams
Article 2: Residents’ Taxes Pay For Great Park Without Their Knowledge
Get informed news coverage of Irvine and the Great Park with our free email updates. Click here to sign up.

Homeowners in Irvine’s Great Park Neighborhoods are on the hook for over half a billion dollars of debt to build the Orange County Great Park, but many of them have no idea what they’re paying for.

“When I bought the condo, it was my first time buying a home, and they didn’t explain it,” said Joe Hisel, a homeowner in the Park, who started out living in a condo near Parasol Park before moving to his house in Beacon Park, both parts of the Great Park Neighborhoods development that were canvassed by Voice of OC reporters this past month.

“They said they were going to use the funds for developing the neighborhood, like structure new buildings and a common area that we can use,” said Troy Lee, who moved to the neighborhood last year and pays an additional $1,800 in special taxes each month.

Not one person said they’d been told the taxes went specifically towards the development of Great Park infrastructure. The primary source of their information came from their realtors and Lennar Homes, one of the housing designers in the park, according to homeowners.

“We didn’t really look into where it went,” said three-year resident Kalyan Mangaraja. 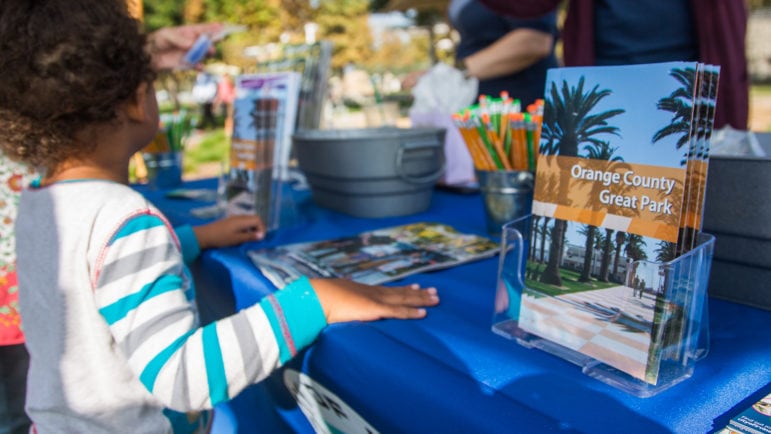 An information booth at a Great Park event.

The homeowners also don’t have paperwork stating that the money will be spent on Great Park infrastructure.

Under state law, developers are required to give potential homeowners a tax disclosure that explains the special taxes and what the cost to the homeowner will be.

The disclosure lists what the funds can be spent on, including development of new streets, property acquisition and additional infrastructure. The funds can also be used on “bond related expenses,” a term that isn’t defined further in the disclosure.

But the disclosure doesn’t specifically state that the money goes towards the Great Park, or that some of the funds are used to build streets for the new housing development. The developers pay for the construction of the home, but the common infrastructure is paid for by homeowners according to FivePoint Holdings, the developer in charge of the neighborhood and Irvine’s partner in developing the park.

While special taxes are common in new developments to help cover the cost of infrastructure, the structure for the Great Park’s taxes do not have a set end date and will be used to pay for the Park’s maintenance.

Currently, the city has also placed just over $280 million in bonds on the Park, and with the interest that has to be paid on the bonds, the total cost to the homeowners comes out to nearly $600 million over the next 40 years.

The bonds are paid back exclusively by homeowners in the Great Park Neighborhoods according to city records, and there are 3,250 homes sold in the Park so far according to FivePoint.

To pay for those bonds and to help develop the Great Park infrastructure, homeowners in the Great Park pay a special Mello-Roos tax on their property, that comes out to anywhere from $2,000 to $21,000 depending on the size of the property. The $2,000 statistic is for a property less than 800 square feet.

The city of Irvine has received $93 million from special taxes on the Great Park in the last five years and is set to receive an additional $30 million by June 2020 according to city records.

Irvine councilman Anthony Kuo said that having the taxes set up permanently is different than other similar housing developments in Irvine, but that it wasn’t the decision of the current council.

“There were promises made by previous councils that tax dollars from the balance of the city would not go to pay for the Great Park,” Kuo said. “It’s somewhat like property tax, for each homeowner it depends on the property value, and frankly I know of people who’ve chosen to not purchase a home in the Great Park Neighborhoods.”

The city sets the new bond potential as homes are developed in the Park by assessing the value of a group of homes and setting how many bonds that neighborhood can hold.

At a January meeting, Mayor Christina Shea explained the city’s role in approving the new tax districts and the bonds that could follow.

Irvine Mayor Christina Shea at the Jan. 28, 2020 Irvine Council meeting discussing who pays for Great Park bonds, as part of setting up another special tax district for a Great Park neighborhood.

“We’re not holding the debt for the developer, it gets passed off to the homeowners,” Shea said. “This is a standard process that’s gone on the 20 some years I’ve been here. We facilitate the bonds, but it’s not on our books or anything.”

No notification is sent to homeowners about the fact that a public forum involving placing bonds on their home has been scheduled, according to city staff and residents who say they’ve never received any notification from the city about the special taxes.

“That would be nice to have,” said Great Park resident Ali Tatrashia.

The maximum number of bonds will continue to rise as development continues throughout the Park as FivePoint continues to sell more of the land to homeowners that then take on responsibility for the special taxes.

Despite Great Park homeowners financing the amenities going to the Great Park, many of them have expressed concerns that their own needs aren’t being met in the community. Every resident Voice of OC reporters spoke with was concerned about the lack of a shopping center in their area.

“When I joined the council in 2016 everyone said that a shopping center would be going in soon, and they still haven’t broken ground,” said city Councilwoman Melissa Fox. “I don’t know what the delay is.”