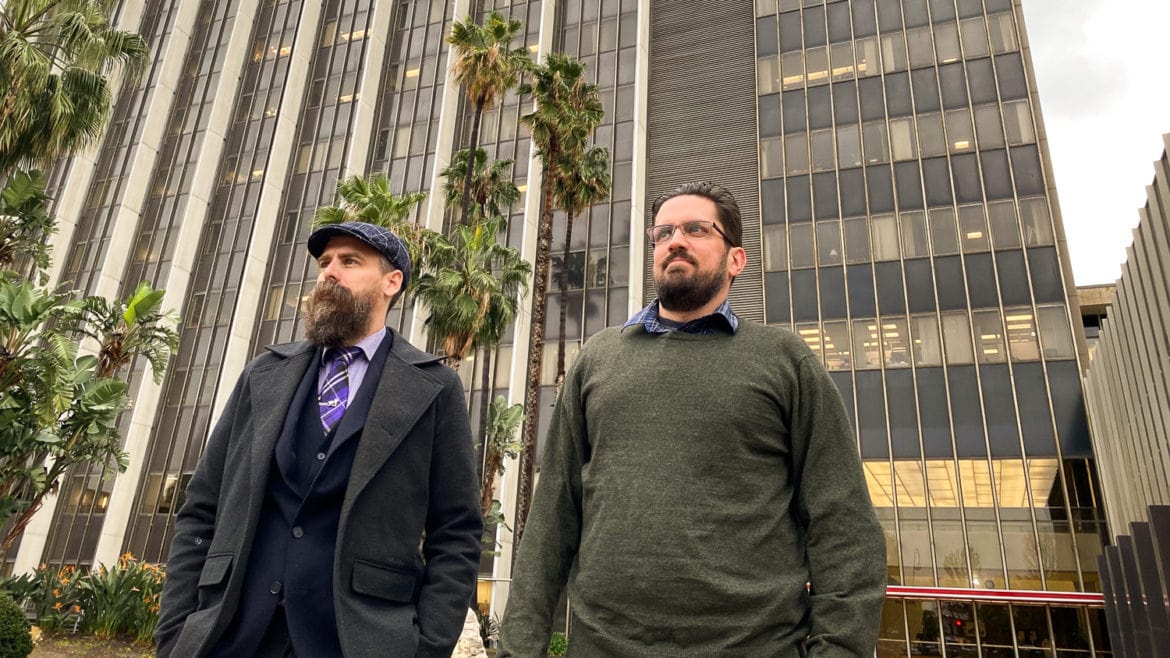 Fullerton residents and bloggers, Joshua Ferguson and David Curlee, outside of the Orange County Superior Courthouse. They're fighting a Fullerton lawsuit against them, which the city alleges the two stole documents that were published on the blog by someone else. March 12, 2019.

The two headed to court Thursday with the hopes of getting Judge James Crandall to dismiss Fullerton’s case against them and the blog, Friends for Fullerton’s Future. Some of the published documents show how former City Manager Joe Felz crashed his car after drinking and was given a ride home by police.

“They (Curlee and Ferguson) want the city to be transparent,” Crandall said. “How the city conducts businesses and how they’re covering for police.”

Curlee and Ferguson argued Fullerton’s lawsuit against them is retaliation for the blog publishing the documents.

None of the documents in question were published under their names.

But the judge wasn’t ready to dismiss the case stemming from an anti-Strategic Litigation Against Public Participation (SLAPP) motion made by Ferguson and Curlee. SLAPP lawsuits are usually used to silence critics and dissidents through drawn-out litigation, which can bury people under legal fees.

“Even if it was arguably newsgathering … they offer no evidence, whatsoever, they didn’t take the files,” said Fullerton attorney Kimberly Hall Barlow in court. “They took something that doesn’t belong to them and we want it back.”

“The thornier question is whether the injunction should also prohibit publication or discussion on the blog of documents obtained through such improper acts,” reads the judge’s ruling.

“Defendants contend that such an injunction would amount to an unconstitutional prior restraint on the press. However, the injunction here is not a prior restraint, as it is a content-neutral restriction on defendants not based on their speech, but on their own prior unlawful conduct,” reads Crandall’s ruling.

In court, she cited various cases of news organizations receiving information that was stolen and numerous courts ruled it was protected under the First Amendment.

“There’s no cases around that uphold that,” Aviles told Crandall.

“All those cases weren’t about information illegally gained by the press,” Crandall said in court.

But Aviles said the decision could affect other newsgathering.

“The deprivation of those rights, even for a short amount of time, could be catastrophic,” Aviles said.

She also said the city-issued Dropbox link wasn’t just sent to Ferguson and Curlee, but to all people who got public records from Fullerton. So, anyone could’ve accessed the files Fullerton attorneys allege the bloggers stole because the Dropbox account wasn’t password protected, Aviles said.

“I think the declarations make clear … they did try very hard to protect those files,” Barlow said.

“I’m going to impose the preliminary injunction so they can’t publish,” the judge said.

Thursday marks the second time Ferguson, Curlee and the blog have been hit with a publishing gag. Another OC judge, Thomas Delaney, granted the original gag in October, but then the Fourth District Court of Appeal blocked the gag and has been watching the case develop in the lower court.

Aviles said she plans on appealing Crandall’s ruling on the anti-SLAPP motion and the publication injunction.

Leading up to Thursday’s ruling, Aviles has been raising questions over discrepancies in court filings from Fullerton city attorneys.

In the latest round of court filings, forensic computer expert John Bambanek said the city’s computer analyst potentially misrepresented evidence to the court.

“The court relied on the City’s ‘expert’ testimony when it granted the Temporary Restraining Order, but it has since been shown, by the city’s own declarations, the underlying facts are different than the City first suggested,” read’s Bambenek’s declaration.

Bambanek points to the exclusion of U.S. internet addresses and the “enrichment” of Dropbox logs, which is the cloud-based storage and sharing service Fullerton used to store records Ferguson and the blog allegedly stole.

“Yet, the City has provided no direct evidence to substantiate this claim and is virtually impossible because the users were, by their very nature, anonymous. Given that the manner in which the City intentionally configured its Dropbox account, removing the normal password restrictions, the anonymous users could be anyone,” reads Bambenek’s declaration.

Despite the discrepancies, Crandall said Fullerton attorneys showed the court enough likelihood that the case could succeed in trial court.

“If any cause of action survives, then the SLAPP is denied,” Crandall said.

“Ultimately, the court has no reason to suspect that the information provided in the Strebe logs is inaccurate, or that any ‘enriching’ or ‘filtering’ by Strebe adulterated data,” reads Crandall’s ruling.

Aviles tried to get Strebe’s declaration, along with a host of others, thrown out of the court proceedings.

“Based on the experts, it appears there was some illegal activity,” Crandall said. “I’m just saying it looks like they (Fullerton) have a likelihood of prevailing.”

Despite his SLAPP ruling and injunction, Crandall said he finds the blog’s actions “to be protected activity.”

The judge also said the documents published by the blog are “a matter of public interest.”

Barlow countered, “We’re trying to get our property back … and that’s the fundamental underlying claim.”

“You may be embarrassed” by the documents, Crandall said.

Meanwhile, Aviles related the case to the infamous Pentagon Papers.

“They (Fullerton attorneys) talked about this just being a property case. So was Pentagon Papers, if that’s the way you want to describe it,” Aviles told Voice of OC.

The Pentagon Papers case started when President Richard Nixon tried to block the New York Times and other newspapers from publishing a classified study about the Vietnam War and the United States Supreme Court sided with the newspapers in 1971 and allowed publishing the study.

The 7,000-page study was leaked to the New York Times, the Washington Post and other newspapers earlier that year by Daniel Ellsberg, a military analyst for the RAND Corporation. It detailed the history of U.S. involvement in Vietnam starting in World War II until 1968, when there were over half a million troops in Vietnam. It was also the deadliest year during the war that saw nearly 17,000 troops killed.

“The dominant purpose of the First Amendment was to prohibit the widespread practice of governmental suppression of embarrassing information. It is common knowledge that the First Amendment was adopted against the widespread use of the common law of seditious libel to punish the dissemination of material that is embarrassing to the powers-that-be,” wrote Justice William Douglas in his opinion on the Pentagon Papers case.

Douglas sided with the newspapers.