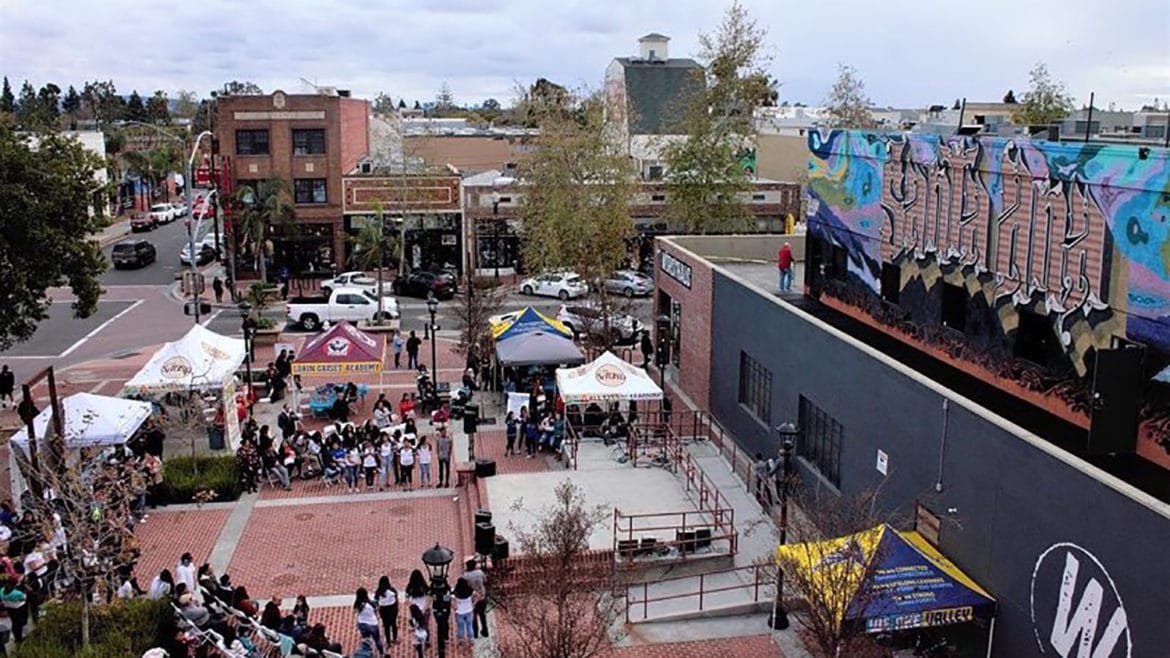 An aerial view of Plaza Calle Cuatro in Santa Ana during the 2018 Boca de Oro festival. The plaza is set up for dance an art making activities.

For Robyn MacNair, co-founder of the Boca de Oro Literary Arts & Culture Festival, her creation started with a dream: to showcase Santa Ana’s cultural richness and bring families and communities together with an arts and literary festival.

Working closely with the Santa Ana Unified School District, she and others turned her dream into a vibrant reality.

Now, four years later, with over 100 events, 100 authors and poets and 26 participating schools from SAUSD, the fourth annual Boca de Oro (Mouth of Gold) Literary Arts & Culture Festival is bigger than ever. It will transform Downtown Santa Ana this Saturday, March 7, from 10 a.m. to 10 p.m. Admission is free.

The massive festival takes place in various locations across DTSA, with 46 event venues and other areas including Birch Park, the Orange County Center for Contemporary Art, the Calle Cuatro Plaza and Spurgeon Promenade. New to Boca de Oro this year will be a free trolley at Birch Park that will take visitors to the festival’s many locations.

Building a Culture of Artistic Literacy 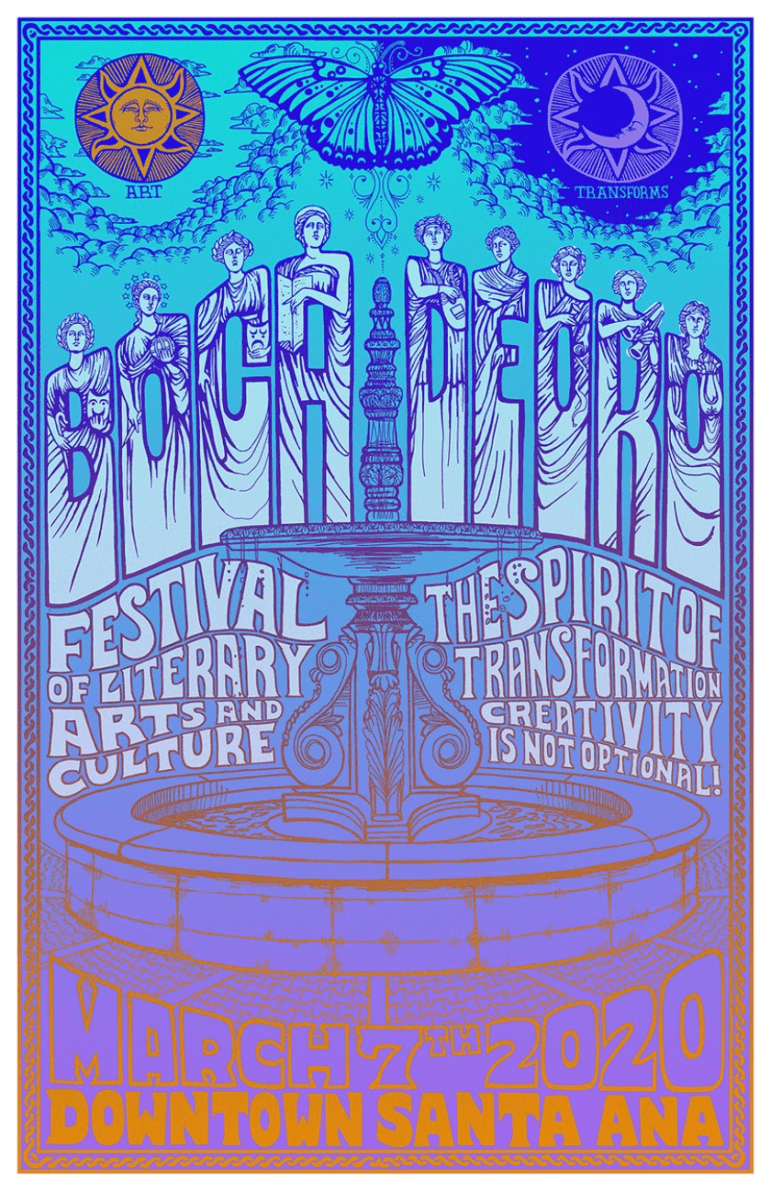 The festival’s poster, illustrated by local Santa Ana artist Barbie Godoy, features the nine Greek muses, which are also used to craft the nine letters in “Boca de Oro.” Each muse depicts a different form of artistry as each one can be seen carrying a representative artifact.

These artifacts include a writing tablet to symbolize epic poetry, a lyre to symbolize music and the comedy and tragedy masks to represent theater.

“I think that those become like the universal language of true literature. We have the ability to be further than where we are. And we have the ability to express ourselves in more raw and realistic ways than we normally can,” said Madeline Spencer, co-founder of the Boca de Oro Literary Arts & Culture Festival.

Uniting all elements in the center of the poster is the Santa Ana Chairing Fountain, which symbolizes the symbiotic effect of the combined arts.

This year, Boca de Oro is focused on the overarching theme of the “Spirit of Transformation,” collaborating with Oasis Center International and SAUSD to include themes such as “art transforms” and “creativity is not optional.”

Since its inception in 2017, Boca de Oro has grown steadily with support from the community, the school district and the Santa Ana arts world to include author panels, workshops, poets and storytellers. The festival invites talent from all over the county to participate, as well as regionally known authors and writers.

“We know that people don’t get the chance to travel. They don’t get the chance to go outside of their communities and they’re so busy and caught up in their life,” said co-founder Madeleine Spencer. “So the nicest gift that we could possibly give is to bring all of these people from all over is creating (a) space for our community to share … in a central spot in the city.”

March is recognized by the school district and the city of Santa Ana as Youth Art Education Month, so co-founders MacNair and Spencer wanted to expose the rich artistic scene that’s in their backyards.

The pair aimed to create an “internal pipeline” to help SAUSD students connect to the downtown art district and ultimately foster a community-driven event to help residents become connected while also building a culture of artistic literacy.

Artistic literacy not only enriches the county, but it can help cultivate better dialogue among different communities so that problems can be solved “in a methodical and thought-out way,” Spencer said.

SAUSD and Santa Ana have a joint goal to promote arts learning among students in the district, which is part of a well-rounded education, MacNair said.

“To be literate in the world means that you really can understand artistic expression, whether it’s coming from a painting, a dance or a piece of literature,” Spencer said.

Marcus Omari, founder of Poetic Reform Party, was hired by the school district to promote inclusivity in the arts among high school and middle school students. Omari helps students with their performances and writing, as well as encouraging them to join the annual Santa Ana Unified Literary Competition, now in its second year.

“We have these nationally recognized students going out and doing these amazing monologues and dialogues, but we never get to hear them here in our own city,” Spencer said. “Let’s pull them into the festival so we can finally hear them and we can see all of our talent.”

Omari works with Jason Crabbe to curate Lit Con, which is a literary competition where students from across the district perform original prose, poetry and media. The winners then perform their pieces in front of an audience at The Wayward Theater in Grand Central Arts Center as a part of the festival.

Local authors are also part of the festival, including Marytza K. Rubio, Ernesto Cisneros, Eric Timmons, Stacy Russo and many others.

Breath of Fire to Perform

Boca de Oro’s final event will be performed by Breath of Fire Latina Theater Ensemble, a local nonprofit organization that focuses on the themes and concerns of the Latinx community to empower and enrich it through visual and performing arts. The ensemble will be performing at least six pieces that will examine issues such as immigration and immigrant rights. 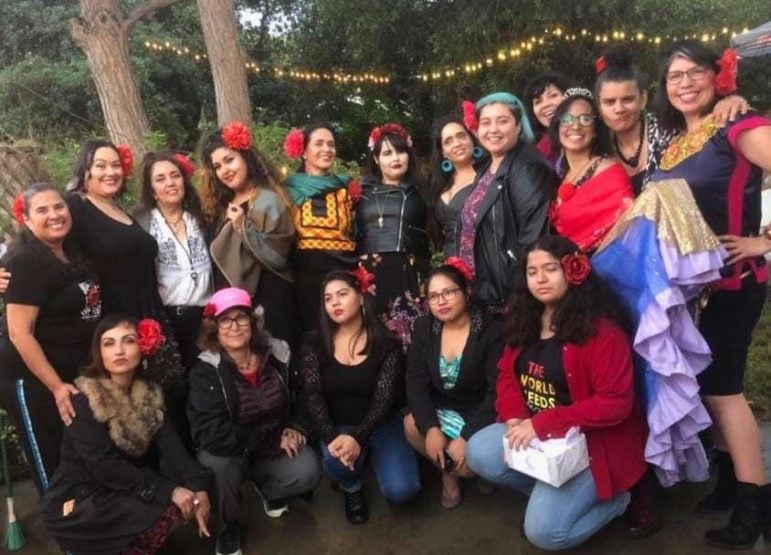 “It’s really about just telling the story and allowing people to take it in,” said Sara Guerrero, the founding artistic director of Breath of Fire. “Are you seeing yourself on stage? You identify, or you connect to it somehow. And I think that’s what I’ve always loved — how transformative theater can be.”

This year’s festival keynote speaker will be Zara Raheem, author of “The Marriage Clock.” Raheem’s debut book is a comedic narrative that tells the story of Leila, a South Asian American woman, and her search to find a husband. Leila’s parents worry about her marital status, so she makes a deal with them: She will find someone within three months. If she fails, her parents have permission to arrange Leila’s marriage.

“I think that the book itself is for people who are not familiar with South Asian culture. It really gives you an insight into some of our cultural traditions and practices,” Raheem said.

Among the new features at this year’s festival:

Festival organizers are driven by a firm belief in the power of the arts. “It’s my personal passion to see a young life transform because they were touched through the effort of the arts. So it’s very meaningful and so rewarding to see kids who not only enjoy a day out at the park, but (getting) exposed to a lot of the art mediums,” said Jin Sung, the founder and executive director for Oasis Center International.