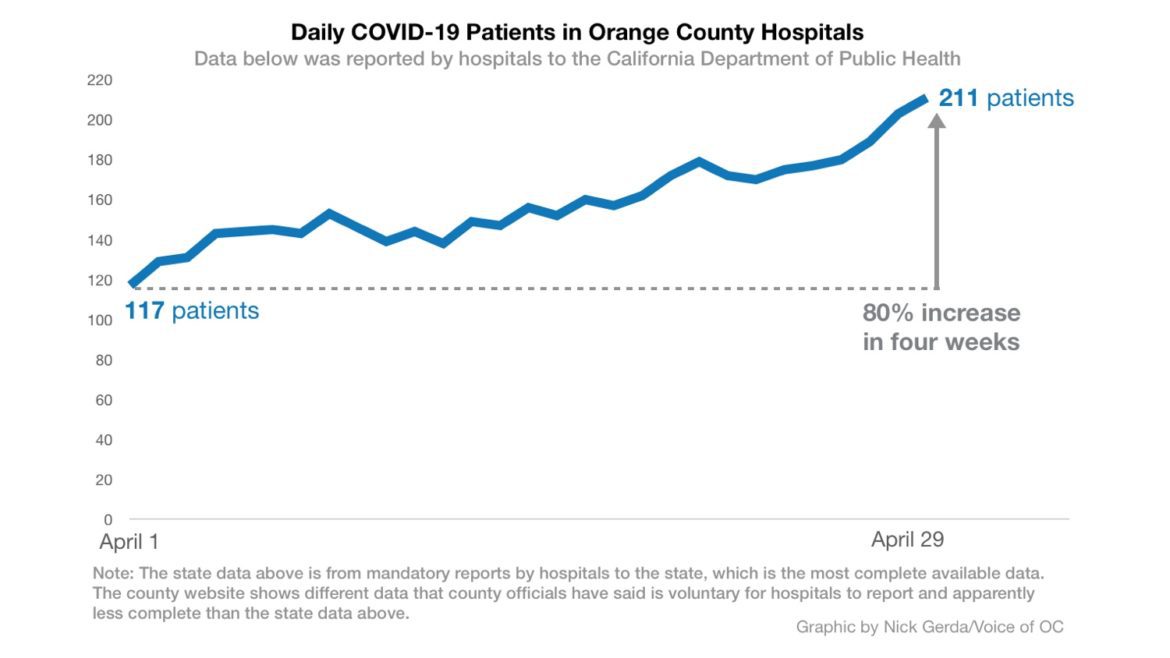 Coronavirus hospitalizations have been rising in Orange County – up 80 percent over the last four weeks, according hospital data – despite widely-shared claims by county supervisors that the curve has “flattened” and is “trending down.”

The narrative of hospitalizations falling was most recently promoted in a news release from Supervisor Michelle Steel Thursday, which quoted her saying “Orange County has been successful in flattening the curve” and “hospitalizations are decreasing.”

The issue of Orange County hospitalizations has become a point of contention with Gov. Gavin Newsom, who recently said the county – the third-largest in California – has the fourth highest number of coronavirus hospitalizations in the state.

“Flattening” the curve of hospitalizations – and seeing a steady decrease day after day – is one of the key metrics state and county officials are watching to decide when to start relaxing stay-at-home rules that have closed many businesses.

And in public statements this week, Steel and OC Supervisor Don Wagner said the county’s curve had flattened – and even declined – in comments that were widely shared.

“We have flattened the curve,” Wagner said Tuesday at the public meeting of the Orange County Board of Supervisors.

Later that day, he and supervisors’ Chairwoman Michelle Steel reiterated their point in a press release, with their statements circulating widely in news reports and on social media.

“Orange County has effectively ‘flattened the curve,’ ” Wagner and Steel said in their release, which featured the county’s official seal and was read aloud live on one of the most listened-to radio shows in Southern California.

The release also quoted Wagner saying the curve is “trending down.”

Orange County Health Care Agency officials confirmed the hospitalizations increase and indicated they weren’t aware of any accuracy problems with the state data. The state data is collected by the county and published by the California Department of Public Health, known as CDPH.

“I wouldn’t say that CDPH data is inaccurate,” said Tammi McConnell, Orange County’s emergency medical services administrator, in a written response to questions Thursday. The state data focuses on “all hospitals in OC,” she added.

“We’ve started to see clusters of cases in these facilities in the last two weeks.”

Wagner, in a phone interview early Thursday afternoon, said the message has not been that hospitalizations are declining, but that Orange County is doing better than surrounding counties.

“We haven’t said that the hospitalization rate is down,” Wagner said.

Asked about Steel’s news release saying “hospitalizations are decreasing,” Wagner said he couldn’t speak to it, and noted a study by UC Irvine professors found that OC is doing better than surrounding counties.

“I have never said the curve is going down,” he added.

When the reporter noted Wagner was quoted in his own news release Tuesday saying the curve is “trending down,” Wagner said: “I believe the curve is flattening. I have not seen it [go] negative yet.”

The most complete data available shows a 80-percent rise in patients during the month.

Hospitals report their virus hospitalizations to both the state and the county. The state data for Orange County appears to be more comprehensive because it’s mandatory for hospitals to report, while the data published on the county website is based on voluntary reports from hospitals.

However, the county and state data for OC both show a steady rise in patients this month.

Steel and Wagner are the highest-ranking OC officials to assert that the coronavirus curve has flattened locally. One of the county’s top health officials also said the curve was flattening this week.

In their countywide health update on coronavirus on Tuesday, Simmering and other county officials did not acknowledge the rising number of coronavirus hospitalizations in Orange County and did not show the hospitalization trends.

Simmering cited a flattening of the county’s curve when justifying why Orange County should aim for the lower-end of the governor’s range for testing goals.

The governor has called for 60,000 to 80,000 daily coronavirus tests across the state, of which Orange County’s proportional share would be 4,800 to 6,400 tests per day. (OC has about 8 percent of the state’s population.)

Simmering and other county officials have set a goal of 4,000 coronavirus tests per day in Orange County.

“Perhaps Orange County has managed to flatten the curve to an extent. So what we did is we said, okay out of that 60,000 to 80,000 range [statewide], let’s take the lower range,” Simmering said at Tuesday’s supervisors meeting.

“What we did was we basically took the 60,000 and we multiplied it by 8 percent, because Orange County accounts for 8 percent of the state’s population. That would get us to 4,000 tests per day,” she added.

Currently, OC is running at about a third of the county’s goal of 4,000daily tests, according to county data. On average, 1,400 tests results have been reported in Orange County each day for the past week, about 0.04 percent of the total population of 3.2 million people, or about one in every 2,300 people.

San Diego County, which has about the same population size as OC, has averaged about 2,000 coronavirus tests per day over the past week.

Testing supplies continue to be scarce, according to county officials, particularly protective gear for medical workers and the long swabs used to gather samples.