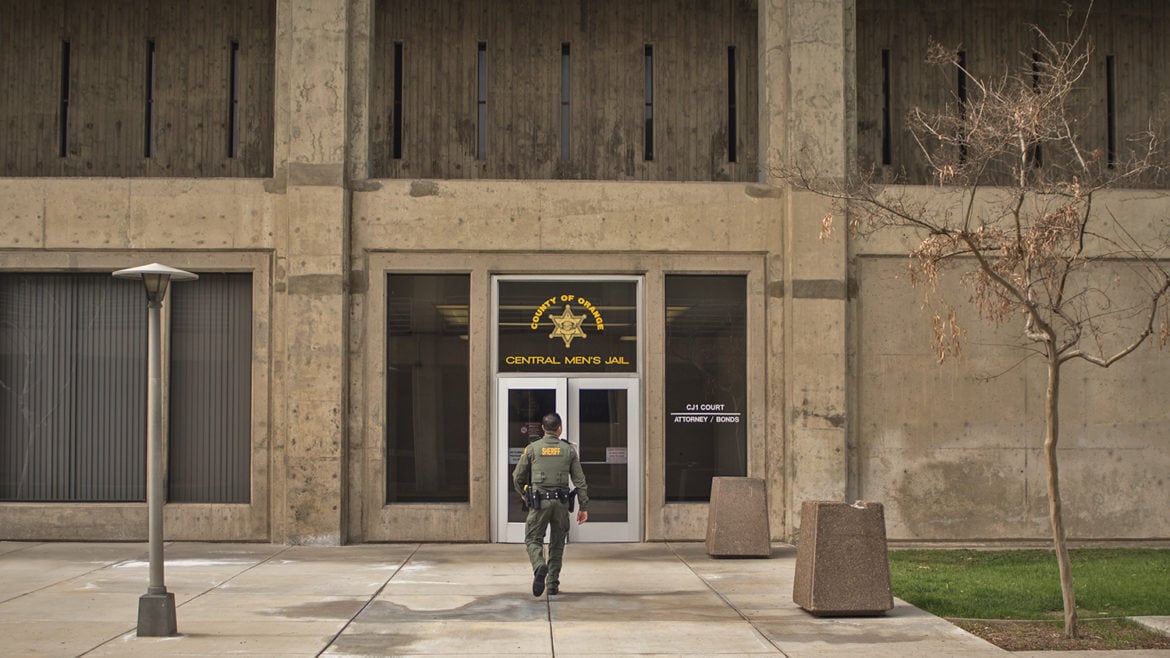 A sheriff walks into the Orange County Central Men's jail on Oct. 23 2019.

Orange County jails experienced a novel coronavirus outbreak over the past week and on Tuesday, officials announced plans to early release jail inmates, having already released nearly 1,000 people since March 1.

Meanwhile, jail workers are increasingly voicing concerns over their own safety.

This week, a group of defense attorneys asked U.S. District Judge James Selna to clear out the county jails after at least five prisoners tested positive for the novel coronavirus over the past week. The attorneys asked the judge to order people with less than six months in their sentences be released and recall all active arrest warrants.

“Plaintiffs request an order to release prisoners: those serving sentences for misdemeanors, or awaiting trial for misdemeanors, those held for probation or parole violations or for immigration, those with remaining actual custody time to release of less than 6 moths, all these held on non-violent charges, and all other pretrial detainees who can post $10,000 bond,” reads the Monday filing in the U.S. District Court.

Sheriff Don Barnes said the department is reducing the number of people locked up.

“We are doing everything within our ability to manage COVID-19 within the jails while caring for the inmates and the staff who are courageously working there, coupled with mitigating the risk to the public at large. Our efforts have been focused on reducing the number of inmates in dormitory and barracks style housing consistent with social distancing. We are balancing this effort while managing a mega jail and the complexities that brings,” said Barnes in a statement.

The filing seeking the jail releases stems from an existing lawsuit against the County and its jailhouse phone contractor, GTL.

On Tuesday, Orange County Sheriff Commander Joe Balicki told OC Supervisors that 130 inmates were released over the weekend after the department agreed to release people with less than 10 days left on their sentences.

Sheriff’s union president Tom Dominguez, in a letter last Wednesday, urged Barnes to authorize the early release of nonviolent inmates with less than 30 days left on their sentences.

Although the department originally agreed to release prisoners with 10 days or less left on their sentences last Friday, it extended the remaining sentence threshold to 30 days or less.

“We’ve reduced our jail population since March 1 by nearly 1,000 individuals,” Balicki told Supervisors at Tuesday’s virus update public meeting, which was broadcast on the County of Orange website. “Yesterday, we directed our jail staff to conduct 30-day early releases. We released 162 individuals, 22 of those were medically vulnerable.

Since last Friday, a total of 292 people were released, including 70 people that are considered medically vulnerable: people over 65 and people with existing health issues.

“It has allowed us an opportunity to conduct somewhat of a managed social distancing,” Balicki said.

As of Tuesday morning, Balicki said there are “10 individuals in medical isolation, five of which tested positive for COVID-19 and we have 193 individuals in quarantine.”

The CDC recommends maintaining a six-foot distance from other people in order to curb the spread of the virus — a practice known as social distancing.

“We have had a few individuals from our staff that have went home with flu-like symptoms, but tests came back negative on COVID-19,” Balicki said.

Supervisor Don Wagner questioned whether the inmates released are potentially exposing others to the virus when they get home.

Wagner followed up, “If somebody is symptomatic and they fall into that [early release] protocol … would you release them or hold them until the end of their term?”

Balicki said they’re not holding anybody from being released that doesn’t fall under any of the early release categories or if they finished their sentence and they work with the Health Care Agency on how to best handle the situation — either isolation at home or placement in a facility if the person is homeless.

Braun said the sheriff’s department is using the timeframes given by an OC Superior Court administrative order from Presiding Judge Kirk Nakaumra.

“The sheriff’s been very clear that the agreement with the court provided the latitude for him to look at early releases for individuals up to 60 days out, and those who are in that vulnerable population that’s at risk population, and we have been addressing those up to 60 days,” she said.

The jail nurses said nasal swabs used for testing are running low, along with respirator masks and other personal protective equipment.

“We all know there is a national resourcing issue; but this is not business as usual,” he said.

Their concerns echo reports of supply shortages at medical facilities around the county, and across the U.S.

“There’s not one cache of PPE that’s used for everyone in the jail … (health care workers) have additional access to supply as medical providers,” Braun said, adding that the equipment is reserved for Sheriff’s deputies and medical workers interacting with those in isolation or in quarantine.

Brandon Pho is a Voice of OC reporting fellow. Contact him at [email protected] or on Twitter @photherecord