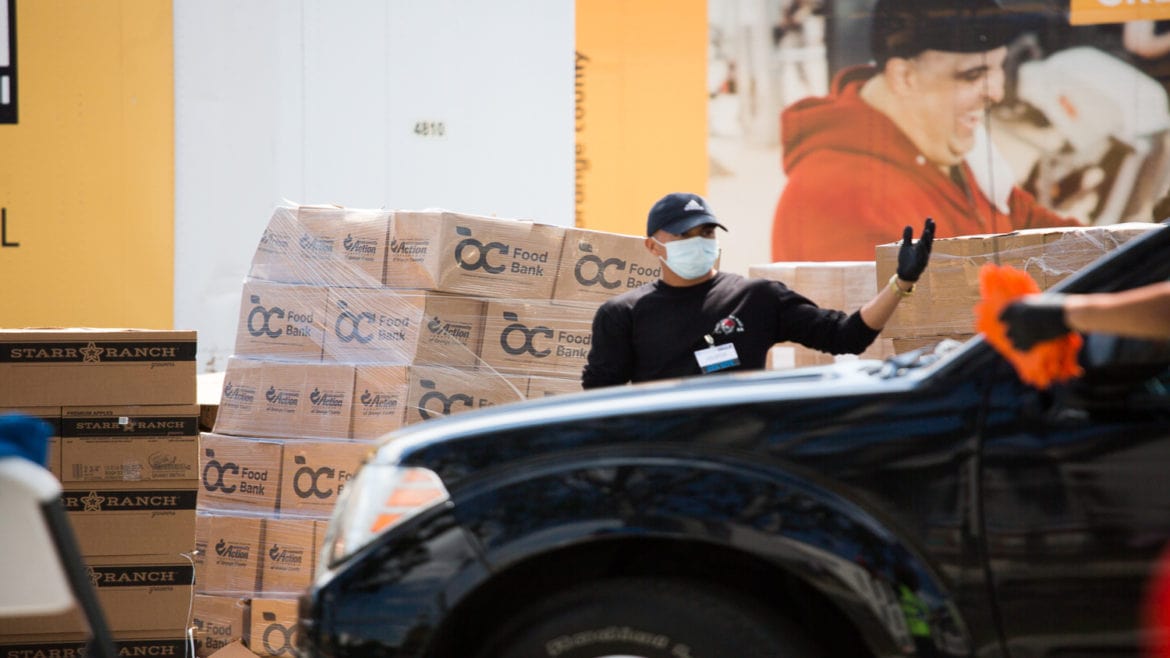 A volunteer from the The Power of One Foundation directs traffic during the drive through food pantry at Santa Ana College on April 11, 2020.

The novel coronavirus has killed 28 people in Orange County so far, out of 1,501 confirmed cases as frustration builds over the Gov. Gavin Newsom’s stay at home order, which pushed 2.7 million Californians to apply unemployment benefits. CLICK here to see a related story.

As of Friday, 16,731 people have been tested for the virus and there’s currently 129 people hospitalized, with 48 in intensive care units, according to updated numbers released by the OC Health Care Agency.

Meanwhile, frustrations over the stay home orders are starting to grow into protests in some parts of the county.

A protest against the orders was held in Huntington Beach today off Main Street and Pacific Coast Highway. And a small protest took place in San Clemente last weekend.

The economic fallout from Newsom’s stay home orders is worsening as scores of people are suddenly out of a job or on reduced hours because the order shut down non-essential businesses like bars, nightclubs, restaurants, concert venues, sports stadiums and nice retail shops.

The Employment Development Department, which is responsible for administering unemployment benefits, was hammered by calls Friday. The call volume was so high, an automatic recording told people to go to the department’s website and hung up.

And the department’s website said it will respond to questions within five to seven days. 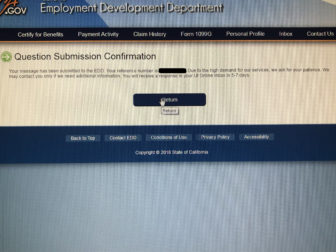 A screenshot of the Employment Development Department’s response to questions submitted through the website. The department’s phone line was directing people to the website because of the massive volume of calls.

University of California, Irvine economist Ami Glazer said the economic situation could be as bad as the Great “So in the Great Recession and Great Depression the problem was demand,” Glazer said. “In this, what’s happening is both supply and demand are down. Consumers are unwilling to buy and firms are having a hard time producing because of the [stay home] order.”

At some point, choices will have to be made that will be a balance of lifting some of the restrictions, while increasing the chances of virus exposure, UCI epidemiology researcher Andrew Noymer said.

“Orange County will not repeat the last four weeks for the next 15 months. So that means you’re going to get a second wave,” Noymer said. “Anyone who gets benefits from the curve flattening now is still susceptible to the second wave [of infections]. That’s why we’re delaying deaths and not eliminating them.”

A trade off may have to be made, he said.

“The harsh reality is there’s no cessation of [stay home orders and social distancing] before next July that doesn’t involve a trade off,” Noymer said.

Noymer also said OC could see around 5,000 virus deaths over the next two to three years.

“I would say starting today and going out to three years, Orange County will probably have 5,000 COVID deaths. So it’s important to understand we’re not having 5,000 over the next two weeks, we’re talking over the next few years. Mortality is part of the picture for this virus,” he said.

To put it in perspective, he said, roughly 40,000 died in Orange County last year.

But, Noymer said, it’s still hard to tell because there isn’t enough testing for antibodies, which shows who has already had the virus. That testing is key for reopening businesses and public lands, he said.

A report from the Economic Roundtable found 43 percent of California’s workforce face a high risk of unemployment stemming from the pandemic.

The chances rise to over 50 percent in working class neighborhoods like West Anaheim and Santa Ana, the report found.

Although some Orange County Supervisors said they want to begin reopening businesses and put people back to work as soon as possible, Gov. Newsom has the final say on the issue.

On Tuesday, Newsom unveiled plans to slowly reopen sectors of the economy. But he won’t have any solid plans until early next month, he said.