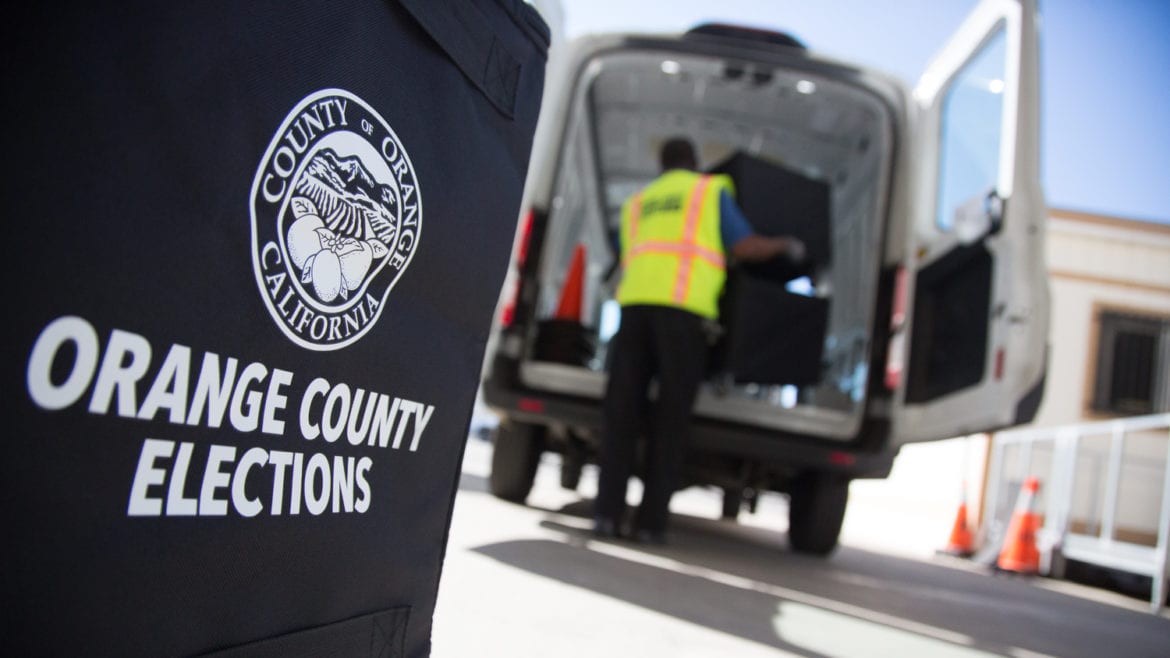 Ballots being unloaded to be counted on March 3, 2020 at the Orange County Registrar of Voters.

Newsom’s new order, issued late Thursday, applies to a number of other cities up and down the state who have special elections slated for this year outside the November general election.

Voters in the Santa Ana election will have between May 9 and May 19 to cast their ballots, deciding whether Iglesias should be unseated, and if so, which of the three candidates running to replace her should take it.

Meanwhile, voter turnout in Westminster’s recall election is now 38% — above average for special elections in Orange County — though with just a small volume of ballots left to count, updated results show the City Council’s three-member will withstand more than a year-long recall effort by residents who sought to unseat them.

“This is in line with current public health orders and mirrors what we did in Westminster.  Conducting the election in this manner will ensure voters remain safe and allow them to cast their ballot at home,” he added.

Of Westminster’s 45,218 registered voters, more than 17,100 ballots were counted by Friday night — deciding whether council members Kimberly Ho, Charlie Nguyen, and Mayor Tri Ta should stay in office or be replaced, and if so, who should replace them.

The recall election took place entirely through mail-in ballots, after in-person voting was cancelled due to the ongoing coronavirus public health crisis.

More than 146 ballots that were on hand remained to be counted Friday night.

“To those who did not support me in this election, I promise to work harder to gain your trust, not by words but by deeds,” Ta said in a statement reacting to the results, urging unity. “My doors are always open to you – supporters and opponents alike.”

As first-timer on the council, “who had barely served six months when this recall effort was initiated,” Nguyen in a statement described himself as an “innocent political victim caught in the wrong place at the wrong time.”

He described his opponents as “a disgruntled group of activists who was hell-bent on toppling the current membership of the city council.”

“During trying times, residents of this great city banded together and brought back a sense of community — something that has long been missing,” reads a written statement from David Johnson, one of the organizers for Westminster United, the political group that mounted the recall effort early last year.

He added: “Our city deserves leaders that will hear the concerns and fight for every citizen not just those residents who have been misled and brainwashed.  We will not give up on making our city a better place for all of our residents.”

If current trends hold, the three council members would continue working in the midst of political turmoil at City Hall and a leadership vacuum at the City Manager’s office, currently steered by Finance Director Sherry Johnson until a permanent city manager is found. Four retaliation and wrongdoing lawsuits against the city’s police department are also ongoing.

The council members would also face the prospect of either bringing the city’s one-cent sales tax increase back to voters for a renewal before it phases out in 2022, or accepting $13 million in lost tax revenue that officials have warned can only be absorbed by making cuts to city services.

On top of all that, the city – along with the rest of the county, state, and country – is still weathering the coronavirus public health crisis, and expects its local economy of businesses in Little Saigon and throughout the city to take a hit as health guidelines remain in place for residents to limit public interactions and nonessential trips out in public.