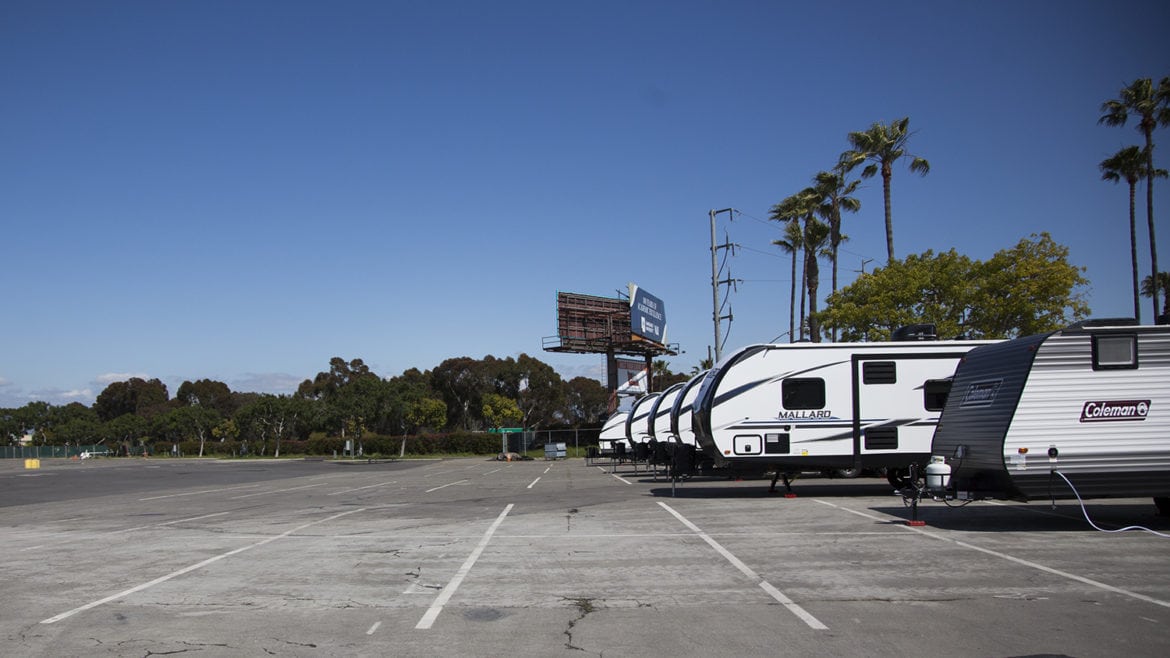 Camping trailers on Lot G of the Orange County Fairgrounds.

Orange County Fair officials approved a request by the surrounding City of Costa Mesa to use the property for camping trailers to quarantine homeless people who could be especially vulnerable to the novel coronavirus, COVID-19.

It’s not yet known if or when the trailers may be used, according to fair staff, but the use of trailers on the property under the zero-dollar rental agreement — approved unanimously by the fair’s Board of Directors Thursday — come amid statewide efforts to provide shelter for homeless people, who otherwise don’t have places to self-isolate.

Currently, the most vulnerable in the city’s homeless population are being housed in hotels, said fair CEO Michele Richards during the Thursday meeting.

“The city at the moment feels that’s the safest place for the most vulnerable members of that community,” she added. “But if that situation should change and those hotels are no longer available…that would be the time the city would turn to us for use of those trailers.”

Fair officials announced the trailers were delivered to the property on April 10, after the state sent them to Costa Mesa.

The approved rental agreement between the fairgrounds and Costa Mesa establishes the guidelines for Costa Mesa’s use of the spaces, including insurance, State Fire Marshal requirements, security measures and reimbursement of out-of-pocket expenses.

State, county and fair officials were also eyeing the 150-acre property as a patient overflow site to help ease the strain on local hospitals in the event of a case surge.

But while the nearby Fairview Developmental Center has already been announced as an alternate care site, fair officials have yet to say anything else beyond an April 10 statement from the agency that travel trailers were being delivered to the property. Three buildings in the Main Mall area of the fairgrounds were also being considered for emergency medical use.

The ongoing COVID-19 pandemic has forced fair officials to grapple with their uncertain future, under public health orders to limit public interactions and restrictions on mass gatherings, with no guaranteed timeline of when those restrictions will ease.

Fair officials won’t be able to execute their fair time contracts and operating agreements pending the possible cancellation of the 23-day fair this summer — a decision the board’s set to make on Monday.

When the board authorized one of its annual event planning contracts to go back out to bid, fair watchdog Vincent Pollmeier suggested staff clarify with any bidders that any review processes would be contingent on any developments with the public health crisis and limits on mass gatherings — a suggestion the board included in their direction to staff.

“We don’t know how soon we’re going to return — or if ever we’re going to be returning — back to massive events,” Pollmeier cautioned during public comment.

With 63 cancelled events due to the public health crisis comes $3.74 million in losses for the agency, Richards said in a board update. Only nine events were rescheduled for a later point in time, recouping more than $1 million in projected earnings.

The OC Fair, with a spending budget of more than $50 million for 2020, was anticipating nearly $40 million from fair revenue, according to this year’s budget.

“The staff is working on a detailed assessment now and will share that with the Board when completed,” OC Fair Communications Director Terry Moore said in a written statement Wednesday when asked by Voice of OC whether fair officials had an estimate on losses resulting from the cancellation, and what its fiscal stability plan could look like as a consequence.

“The staff is also working on a business recovery plan which includes lowering expenses where possible and developing new potential revenue streams. The plan is still under development,” she added.

County fairs that have opted to cancel this year include San Diego County’s at the neighboring Del Mar Fairgrounds, Contra Costa County in the San Francisco Bay Area, and most recently Sacramento County’s at CalExpo.

In neighboring Los Angeles County, no plans have been made yet to cancel its September fair.