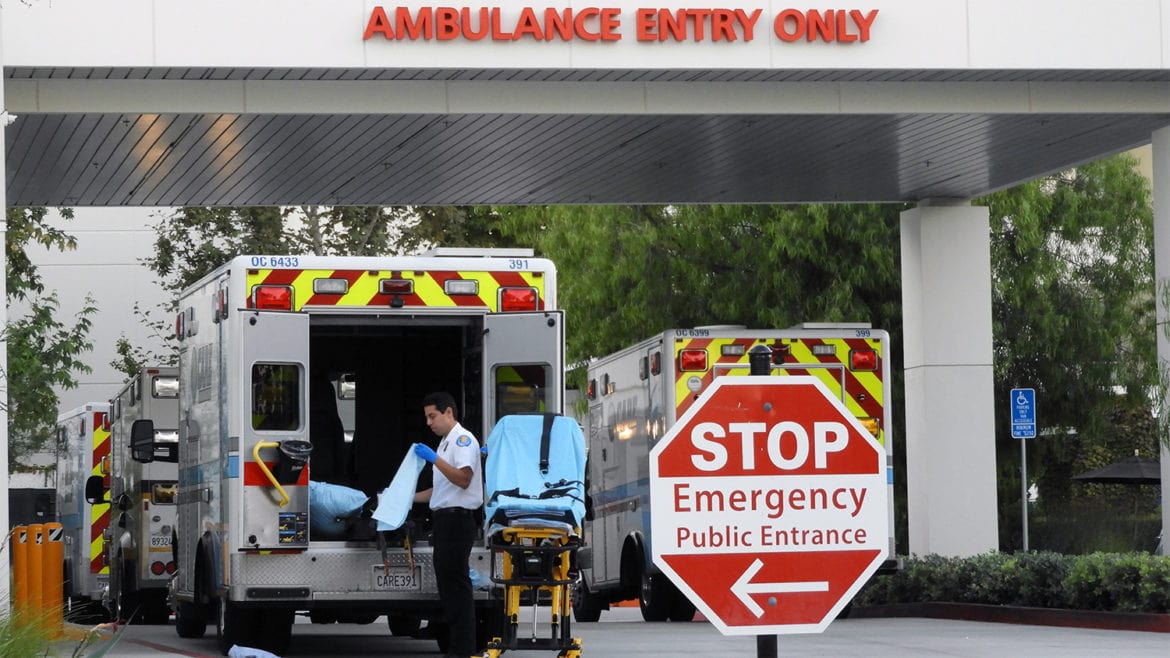 An ambulance is loaded with equipment next to a Hoag Hospital emergency room entrance in 2019.

California and Orange County officials are now expecting the surge of hospitalizations from the new coronavirus pandemic to be less than what was initially projected, which they largely attribute to broad stay home orders.

“It’s also going to be a cautionary tale because if we pull back from that effort you will see numbers that will change dramatically,” Newsom said.

As of Thursday, the virus has killed 17 people in Orange County out of 1,138 confirmed cases. There’s also 124 people currently hospitalized, with 57 in intensive care units, according to the latest publicly released OC Health Care Agency statistics.

“This is actually signaling to us that our peak may not be as high as we planned around and expected,” said Ghaly, adding that current projections nearly mirror what the current hospitalization rate is.

Orange County Health Officer Dr. Nichole Quick also has said she believes the county is heading in the right direction.

“Overall, we believe our trend is headed in the right direction, and that’s related to the number of new cases we’ve seen over a period of time,” Quick said at a Thursday news conference.

“We are basing our response on the idea of planning for a surge in our health care system, and we are working actively with the state, as well as our region, to ensure that we have enough hospital beds,” Quick said.

“We have reason to be hopeful that this is working. I want to remind everybody that this doesn’t mean we can lessen up on any of this, we still need people to stay home and only come out for essential activities,” she said.

But, Quick said, there’s still a shortage in testing kits, which is a nationwide problem.

Meanwhile, County officials continue scrambling to get medically vulnerable and elderly homeless people into hotels as the new coronavirus continues to spread throughout the county.

The first attempt at getting beds at the Ayres Hotel in Laguna Woods fell apart last week after residents protested the site. The city’s population is largely senior residents, who the CDC said the virus will impact more than younger people.

At Tuesday’s news conference, County CEO Frank Kim said a contract with a Stanton hotel was finalized, along with with the Ayres Hotel in Orange.

“Without a hotel or motel to help isolate this population, it exposes the entire community,” said Supervisor Lisa Bartlett at the news conference.

“Hotels and motels across Orange County are working with us,” she said. “The county simply cannot take a hotel, the property has to be offered to us.”

Bartlett has questioned the policy of renting motel rooms as opposed to purchasing such facilities in order to transition them to permanent supportive housing later.

There has been no public update on a proposal to house homeless at regional park areas with sprung structures or the work being done at the Joplin Youth Center in nearby Trabuco Canyon area to also house particularly vulnerable homeless people.

State officials have sent trailers to Anaheim, Santa Ana and the OC Fairgrounds for emergency housing. Anaheim and Santa Ana’s trailers are aimed at housing homeless individuals in city shelters who are either medically vulnerable or tested positive for the virus. It’s still unclear what the next steps at the fairgrounds are.