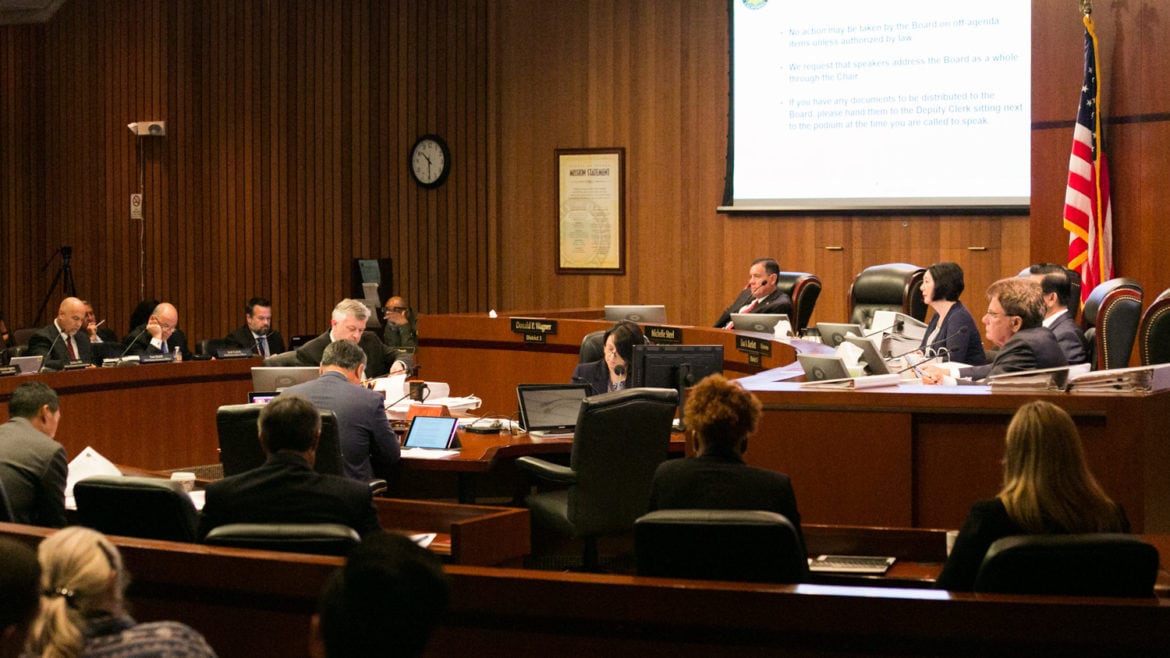 Orange County’s property tax collector now says she will not waive late penalties for taxpayers who are impacted financially by COVID-19 pandemic – a position at odds with the state legislature and other counties, which have urged a broad relaxing of property tax deadlines for people financially impacted by the crisis.

With the April 10 property tax deadline approaching, Treasurer-Tax Collector Shari Freidenrich said last week she would waive late fees for taxpayers who can’t pay on time due to “reasonable cause and circumstances beyond their control,” after they submit a form and documentation that they’ve been impacted by the pandemic.

When Voice of OC reached out this week for more clarity, Freidenrich said the county’s attorneys had advised her she could not issue waivers for people who have financial hardships due to COVID.

“Absent any change in state law, the Treasurer-Tax Collector, per our legal counsel, does not have the authority to cancel penalties due to financial circumstances that prevent timely payment under existing law,” Freidenrich said in her emailed response Wednesday.

Her position stands in contrast with the broad relief from property tax late fees called for state legislators and other counties.

“As you know, the Governor recently issued a ‘stay at home’ order to protect the health and wellbeing of all Californians. Individuals and business owners are dealing with an unprecedented disruption to their daily lives and many are already experiencing financial hardship,” wrote the chairs of the state Assembly committees on budget and taxation, in a March 20 letter to county tax collectors’ statewide association.

“Taxpayers who are unable to pay their property taxes by April 10th because of the COVID-19 pandemic should be granted every form of relief available.”

Freidenrich said her position against financial hardship waivers was on the advice of county attorneys. The county’s lead lawyer, County Counsel Leon Page, did not return a voicemail and text message seeking comment for this article.

OC is being more restrictive than other counties. In nearby San Bernardino County, for example, officials have said late fee waivers will be granted until June 30 for all owner-occupied homes and a large majority of small businesses.

“I plan to grant waivers on penalties for property owners with qualified real property and qualified small businesses to help them through these extremely difficult economic times as far as the law allows, which is June 30,” he added.

Last week, OC Supervisor Andrew Do proposed having the county declare that late penalties should be waived for property tax payers who provide “proof of a loss of wages, disruption of business, hospitalization, quarantine, or other significant consequences of the Novel Coronavirus.” He also proposed creating a committee that would hear appeals of any denials of such waivers

But when it came time to discuss the item and vote on it Tuesday, Do withdrew both proposals without explanation.

Instead, his direction – approved unanimously by the supervisors – was to have a letter sent to the state asking for a zero-interest loan to cover any shortfalls of funding from property taxes.

Do didn’t return a voicemail asking why he withdrew his proposal and what his position is on late penalty waivers for financial hardship.

Public health shutdowns from the ongoing coronavirus pandemic have triggered mass job losses nationwide on a scale and speed not seen since the Great Depression. At least 6.6 million Americans filed for unemployment benefits last week, eclipsing the previous record of 695,000 claims in 1982. Businesses and families across OC and the state have been losing work and income.

At the same time, Orange County officials have privately expressed deeply concerns that if too many people don’t pay their property taxes on time, it will starve local governments of the resources needed to fight the COVID-19 pandemic and provide a safety net for vulnerable members of the public.

So far, property taxes revenues have been coming in ahead of normal in Orange County, according to Freidenrich.

“Currently we have received 71% of the total billed property taxes as of [March 31], just slightly ahead of the same time last [year],” she said via email in response to a question from Voice of OC.

In their March 20 letter, the Assembly chairs said they planned to introduce emergency legislation to “retroactively waive interest and penalties for homeowners and other taxpayers adversely impacted by this pandemic.”

A coalition of local government associations then urged the state not to change the law, saying each county tax collector already has the authority to waive late penalties for people affected by COVID-19.

With that assurance that relief would be granted, state legislators then backed off efforts to change the law. But Freidenrich’s position against financial hardship relief, which was first brought to light by Voice of OC, is now triggering internal concerns among legislators.

On Thursday, Gov. Gavin Newsom said counties have said they expect the state to backfill any financial losses if the state does move to more broadly require waiving late penalty waivers for property taxes.

“On the issue of property tax…we had a call [with the California State Association of Counties] and they have requested that we not impose upon them any mandate or dictate from on high, unless we are prepared to backfill the impacts of that mandate,” Newsom said at his Thursday news briefing.

The president of the California counties’ association, known as CSAC, is OC Supervisor Lisa Bartlett. She didn’t return a phone message seeking comment.

“We’re working with the counties. They’re very anxious, as I said, in this space. And we’re seeing if there’s ways to soften this,” Newsom added.

“This is a conversation in real time. But, again, the purpose of full transparency, they were very clear – the assessors and the county officers – about their hope and expectation. But I am carrying that weight, as governor for the state of California, to answer the question to you and the millions of homeowners in this state, that are feeling that anxiety coming up on April 10th. And we’re gonna see what our options are, and see what we can do to help in this moment. But I don’t want to over-promise in this space.”

As the treasurer-tax collector, Freidenrich is an independently-elected county official, and county officials have said it’s up to her whether to approve or deny late penalty waivers.

“I’m aware that she’s taking this effort on very diligently. She’s talking with her peers in other counties, and she will manage this well,” Kim said in response to a question from Voice of OC.

“I expect that she’ll have additional communication with all those individuals and businesses that have that type of question.”