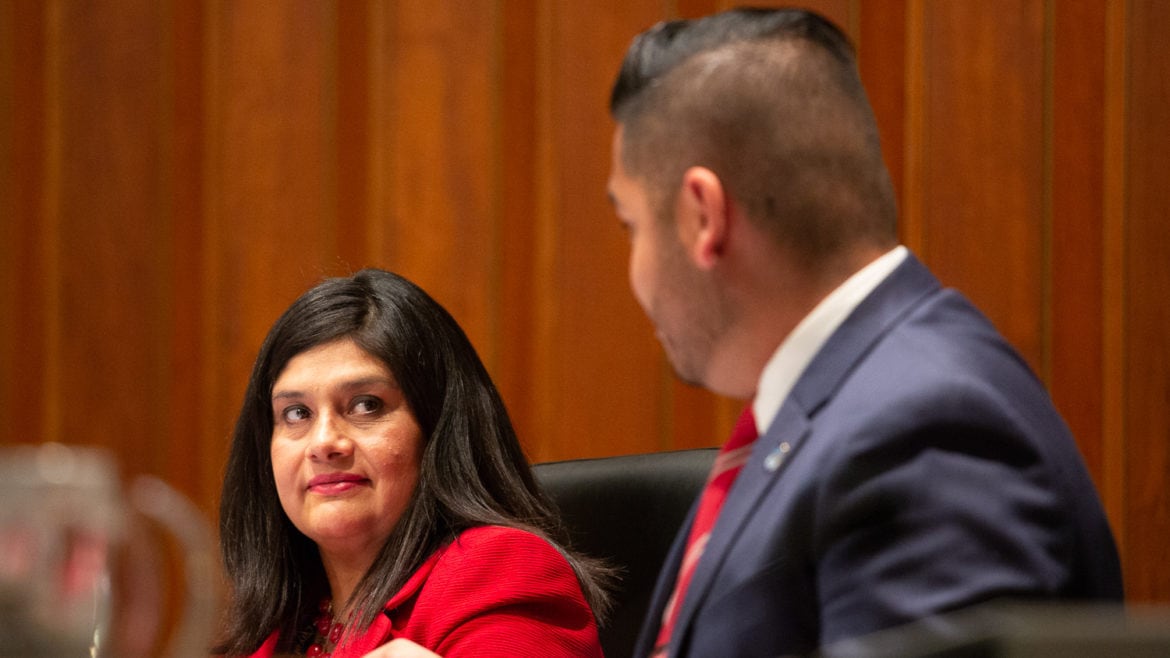 Councilwoman Ceci Iglesias (left) at a Council meeting on Nov. 19.

An effort by Santa Ana City Councilwoman Ceci Iglesias to suspend the city’s sales tax increase during the coronavirus public health crisis failed on Tuesday night to gain any traction with her council colleagues, drawing instead, intense criticism against her for proposing the measure.

Iglesias started the discussion at the council’s virtual Tuesday meeting with anecdotes from 2018, saying council members Jose Solorio, David Penaloza and Phil Bacerra “were all campaigning against” the tax measure, known as Measure X, which brought the sales tax rate up to 9.25% and raises around $60 million in extra revenue every year for a city that spends much of its taxpayer general fund on public safety — specifically the police department.

She called on her fellow council members to join her in trying to “give this financial relief to not just our residents, but also our small businesses because they’re hurting and this would be the way to do it. Leaving a little extra cash in their pocket so they could help pay for other bills.”

After City Attorney Sonia Carvalho said the council didn’t have the legal authority to rescind or suspend the sales tax increase, which voters approved in 2018, Penaloza and Bacerra criticized Iglesias for trying to “score political points” without first consulting staff.

He added, “It would be very irresponsible to do that now because of all the things that we’ve appropriated for with Measure X.”

“That is so inappropriate for you to say stuff like that, David,” Iglesias responded.

Asked by Bacerra whether Iglesias “at least approached” Carvahlo “on procedure on how to do this,” Carvalho said she didn’t know about the scheduled discussion until she saw a draft agenda and “was not consulted in terms of what steps would be required.”

“I’m not here to preach to anybody on how to govern, but you know, we have some great staff,” Bacerra said, adding staff members like Carvahlo have “been very essential in helping me understand certain things that we can and cannot do.”

He continued: “So it’s really frustrating that we are discussing this item, when it seems very simple that, unless this is just something to try to score political points here, the reality at the end of the day is, this is something that really isn’t going to provide real relief for people.”

At the end of the discussion, the council moved on to other businesses without taking any action.

Bacerra and other council members like Juan Villegas voiced concern with another option Iglesias posed — to put the sales tax increase back on the November general election ballot — saying there were more effective ways to tackle the financial burden on residents than rescinding something voters already approved.

Measure X was marketed to voters as a source of extra cash that would go to maintaining city infrastructure and addressing homelessness. At the time the sales tax measure was being floated around, the city faced millions of dollars in budget shortfalls in future budget years.

An extra $60 million is what staff expect to generate every year from the tax until 2029, when the sales tax rate lowers, and extra annual revenue drops to $40 million until 2039, when the tax increase goes away completely.

Though members of the public appointed to serve on the oversight board for Measure X started raising questions last year over whether the money was going where promised – or if it was actually going toward paying off city debts and personnel costs.

“I’m new to the commission, but I’m not new to the politics of how the city has allocated funding in a very controversial way,” said Carlos Perea, a Measure X oversight committee member. “There are feelings that Measure X dollars are not going to where they should be going.”

The City spends more than half of its taxpayer-funded general fund on public safety, specifically the police department, which this fiscal year accounts for $133 million in city spending and includes salaries for employees.

A few months after voters approved the sales tax, the city proposed $25 million in raises for police officers, which the council granted in February last year.  The only critics of the raises were Iglesias and Councilman Juan Villegas, who quickly became subjects of criticism by the police union through memos and letters to the council.

Eventually, the police union put more than $300,000 behind efforts to recall Villegas and Iglesias last year. Only the recall seeking to unseat Iglesias was successful enough to prompt an election set for May 19, where voters will decide whether she should stay in office or be replaced.

Three candidates, all women, have thrown their hats into the race to replace her if she’s unseated by voters.

Iglesias during the discussion denied bringing up the sales tax increase because of the recall.

“The recall that has nothing to do with it,” she said. “I’m here to stand with residents, with the taxpayers.”

“I’m all for putting more money into the community’s pockets, especially for those who already struggle,” Perea said. “But I think if we want to make a bigger impact, I would be more concerned about the working class people in Santa Ana, who are right now in jeopardy because they have lost jobs and cannot work.”

What could prove more effective, Perea said, is if the city expanded on current protections for renters, who currently can’t be evicted by landlords and their utilities will remain on with late fees waived during the public health crisis. Under that ordinance — which the Council passed in March — renters will still have to pay rent within the six months after the emergency ordinance expires, and have to prove they’ve been financially impacted.

Specifically, Perea said a rent freeze should be considered, and City Manager Kristine Ridge later announced that night that she signed an order freezing rents. Many people watching the Tuesday meeting’s livestream on YouTube thought the same.

Perea said he is concerned, however, at the prospect of the Measure X oversight committee not being able to meet over the next few months during the public health crisis to put their reports together ahead of the city’s budget hearings in the summer.

“We don’t know when we’re going to reconvene,” he said. “The city is going to be making some big financial decisions. I’m very concerned.”