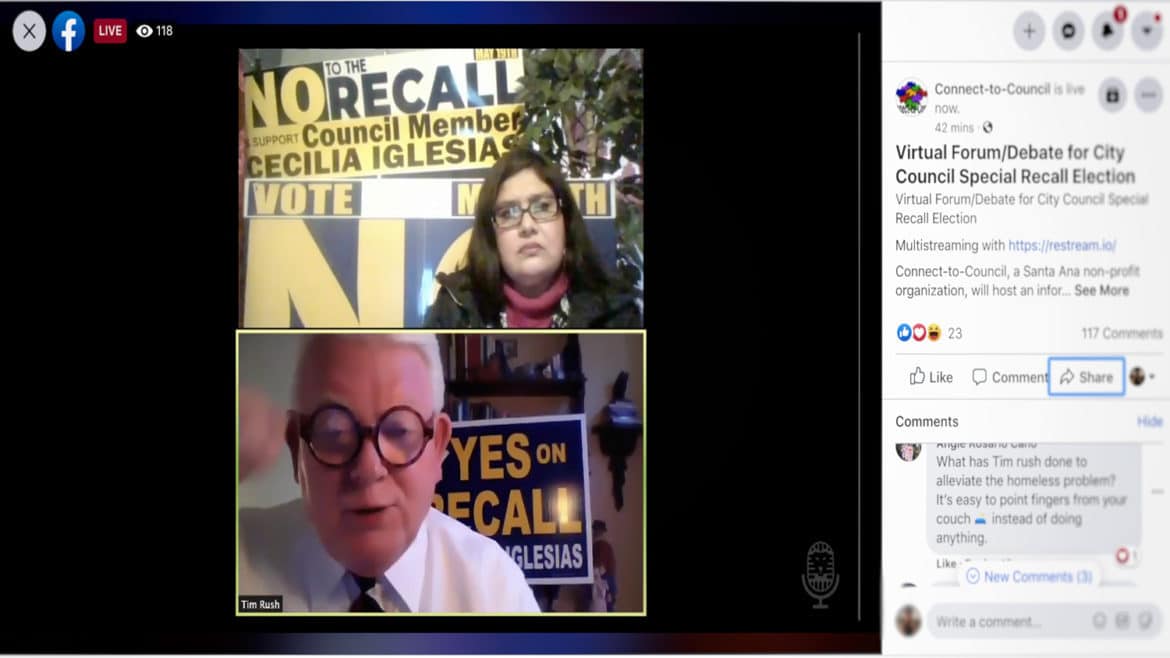 A virtual forum featuring Santa Ana Councilwoman Ceci Iglesias and her political challengers set the stage for key debates over Iglesias’ stances on city issues like the budget and police, as well as her voting record and character.

The Wednesday night debate — broadcast online by Santa Ana nonprofit Connect-to-Council and moderated by Voice of OC Publisher and Editor in Chief Norberto Santana, Jr. — was a chance for Iglesias to defend herself against a recall election, where on May 19 voters will decide whether to oust her in favor of a replacement candidate or keep her in office.

It was also a chance for recall supporters like resident and local historian Tim Rush and three replacement candidates, Nelida Mendoza, Thai Viet Phan and Angie Cano, to argue why someone else should take Iglesias’ City Council seat.

View the full recording of the debate here.

In the first half of the forum, Iglesias defended herself as a steward of fiscal responsibility, describing her history of opposing tax increases and questioning the use of taxpayer dollars on city spending such as raises for police officers instead of other priorities like programs for kids.

“We need individuals who will stand up to corrupt special interests,” Iglesias said during the first half of the forum, pointing to her opposition to $25 million in police raises granted by a majority of her council colleagues last year and her subsequent public battles with the head of the union representing those officers, Gerry Serrano.

Serrano and the Santa Ana Police Officers Association — which is one of the largest political spenders in Santa Ana elections and put hundreds of thousands of dollars behind the recall efforts against Iglesias — declined an invitation to participate in the forum on the pro-recall side, according to Connect-to-Council organizer Dylan Thompson.

Instead, Rush — an Iglesias critic — argued why she should be unseated, describing her as someone who repeatedly “votes against the residents of Santa Ana” and refuses to collaborate with other council members, opting instead for “political stunts” and “gamesmanship” like trying to pull together a council vote this month to rescind the Measure X sales tax increase passed by voters in 2018 — something the council couldn’t legally do.

In another example, Rush said Iglesias last year “chose to bifurcate the city’s budget,” by separating the police department budget from the rest of the budget in light of the police raises, and then voted against both items.

Rush also pointed out that for someone who claims to stand up to special interests, Iglesias initially supported the controversial apartments project at 2525 N. Main St., put forward by developer Ryan Ogulnick, who was tied to and repeatedly denied involvement in more than $320,000 in illegal dark money spent in the 2018 elections.

“For two years residents cried out to you in opposition to this project” Rush said, later adding: “You say Santa Ana is not for sale, yet you’ve sold us out. You’re beholden to special interest groups.”

It was only after residents this month successfully qualified a petition to turn a decision on the project to voters, that two initially supportive council members — and then later Iglesias — flipped on the project and voted to rescind it Tuesday night.

“I honestly believe that it’s a good project,” Iglesias said in response, calling the apartments something that “could’ve brought a lot of resources to the city.” She also said that before the project first went before the council and as public opposition to it was building momentum, she made a point of visiting residents in the neighborhood to hear from them directly.

“It is quite obvious, even to a first time observer … you ask a lot of inane questions that are often answered in the first page or two of staff reports. Why is that?” Rush said, later adding she didn’t display “good understanding of city governance.”

Iglesias said she comes “very prepared” for meetings. “My duty as an elected official is to ask those questions.”

“A lot of these things are handled behind closed doors, conversations that a lot of the public is not privy to. That’s why it’s up to us to ask these questions in public,” she said.

Iglesias’ all-women slate of replacement challengers were given time in the second part of the forum to sound off on key problems facing the city and their visions for solving them in Iglesias’ seat.

The candidates are Nelida Mendoza, a Rancho Santiago Community College District board member who previously ran in 2018 on a slate backed by former councilman and mayoral candidate Sal Tinajero; Thai Viet Phan, an attorney and city planning commissioner who was appointed by Councilman Phil Bacerra; and Angie Cano, a planning commissioner who’s close with Iglesias and has advocated against the recall despite her becoming a candidate.

One of the largest questions surrounding the candidates was whether they’d accept the police union’s endorsement and money. Where Phan and Cano said they wouldn’t, Mendoza — who defended the validity of the recall during the forum, denying claims that the police union was solely behind it — said she would.

The candidates also differed on the issue of rent control. Asked whether it would be something they’d include in their housing strategy, Phan — who’s platform largely includes making housing affordable for younger residents and families — and Mendoza said yes. Cano said she wouldn’t.

Asked whether they — as elected officials in a city with a large number of undocumented immigrants —  would support working with Immigration Customs and Enforcement (ICE)  “more,” “less,” or at the “same” level under current state law, Phan said “less,” Mendoza said “same,” and Cano said “for criminals, more.”

But the candidates also aligned on issues like homelessness, a top issue for all three, who said they oppose plans for the homeless shelter at Yale St., and criticized the county for what they said was a history of looking at Santa Ana as the brunt-bearer of the homelessness crisis.

All three also laid out concerns over the city’s finances due to the coronavirus public health crisis, where limited public interactions and steep declines in sales tax revenue are expected to land large hits to the local economy.

“We should be focusing on balancing the budget,” Cano said, pointing out that spending choices like the police raises have likely worsened the city’s financial crisis going into the public health emergency. “How can we fix the budget when we’re giving all of this money to special interests … it’s simple, just stop selling out.”

Mendoza said that on top of doing something to “bring back money lost during the crisis,” the city needs a “back-to-work program” for any residents who were laid off from or lost their jobs.

A side effect of the budget crisis will be the impacts to renters in Santa Ana out of work, Phan said, adding that the city needs to be “expanding our protections for renters and folks who are living in Santa Ana.”

Even with a freeze on rent increases and bans on evictions, Phan said “We need to do more to protect workers in our city.”