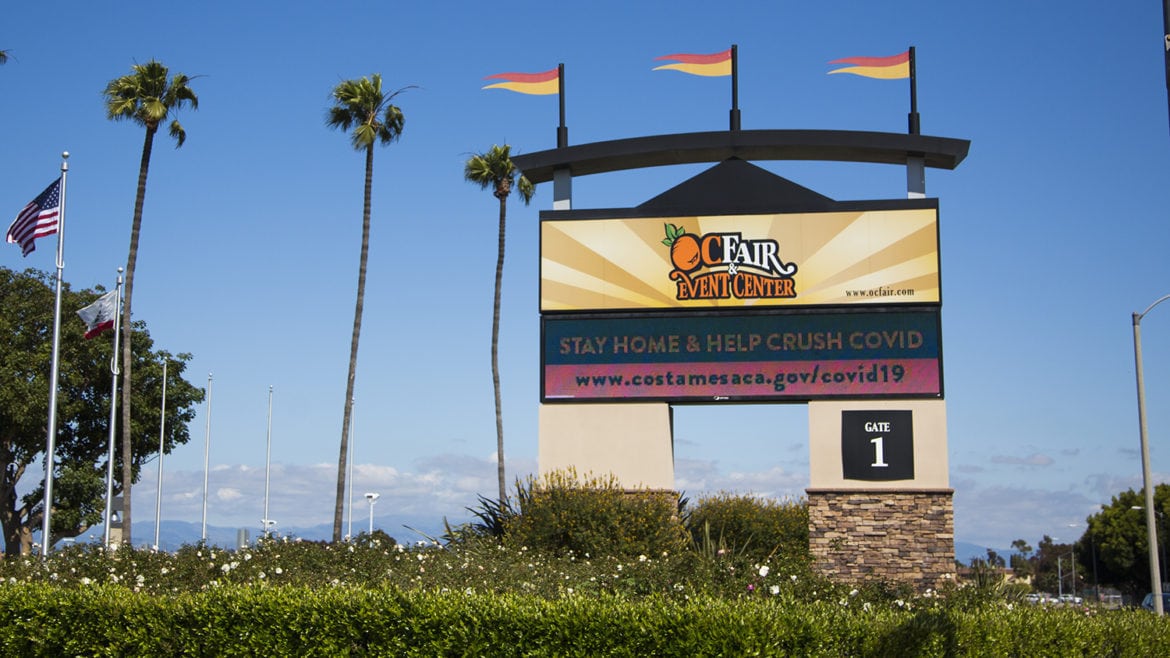 The OF fair and Event Center main entrance.

On Monday, fair officials will also grapple with the decision of whether or not to cancel its annual, 23-day fair this year.

Both the use of travel trailers on the fairgrounds and this year’s possible cancellation would be in line with other county fairs’ recent actions across the state.

Costa Mesa’s use of trailers on the property come amid statewide efforts to provide shelter for homeless people, who otherwise don’t have places to quarantine, to self-isolate. Fair officials announced the trailers were delivered to the property on April 10, after the state sent them to Costa Mesa.

It’s not yet known if or when the trailers may be used, according to fair staff. The fair has all but closed its facilities to the public under health guidelines discouraging mass gatherings and public interactions.

On the OC Fair Board of Directors’ agenda for tomorrow is a lease, at a rate of zero dollars, that would establish the guidelines for Costa Mesa’s use of the spaces, including insurance, State Fire Marshal requirements, security measures and reimbursement of out-of-pocket expenses.

State, county and fair officials were also eyeing the 150-acre property as a patient overflow site to help ease the strain on local hospitals in the event of a case surge.

But while the nearby Fairview Developmental Center has already been announced as an alternate care site, fair officials have yet to say anything else beyond an April 10 statement from the agency that travel trailers were being delivered to the property. Three buildings in the Main Mall area of the fairgrounds were also being considered for emergency medical use.

As fair officials head toward a discussion on cancelling this year’s fair on Monday, other fairs across the state have already cancelled theirs, wary of public health guidelines discouraging mass gatherings for months, at least, as people are already staying at home to help stop the spread of the coronavirus.

County fairs that have opted to cancel this year include San Diego County’s at the neighboring Del Mar Fairgrounds, Contra Costa County in the San Francisco Bay Area, and most recently Sacramento County’s at CalExpo.

In neighboring Los Angeles County, no plans have been made yet to cancel its September fair.

The OC Fair, with a spending budget of more than $50 million for 2020, was anticipating nearly $40 million from fair revenue, according to this year’s budget.

“The staff is working on a detailed assessment now and will share that with the Board when completed,” OC Fair Communications Director Terry Moore said in a written statement Wednesday when asked by Voice of OC whether fair officials had an estimate on losses resulting from the cancellation, and what its fiscal stability plan could look like as a consequence.

“The staff is also working on a business recovery plan which includes lowering expenses where possible and developing new potential revenue streams. The plan is still under development,” she added.

There’s also a question of what the cancellation means for prospective seasonal employees hoping for work at the fair over its 23-day period.

The fair typically hires between 1,300 and 1,500 part-time seasonal employees, most of whom work the fair season.

The fair expected to bring on 1,400 seasonal employees this year.

Both today’s and Monday’s meeting will be livestreamed on the fair’s public meetings page here.