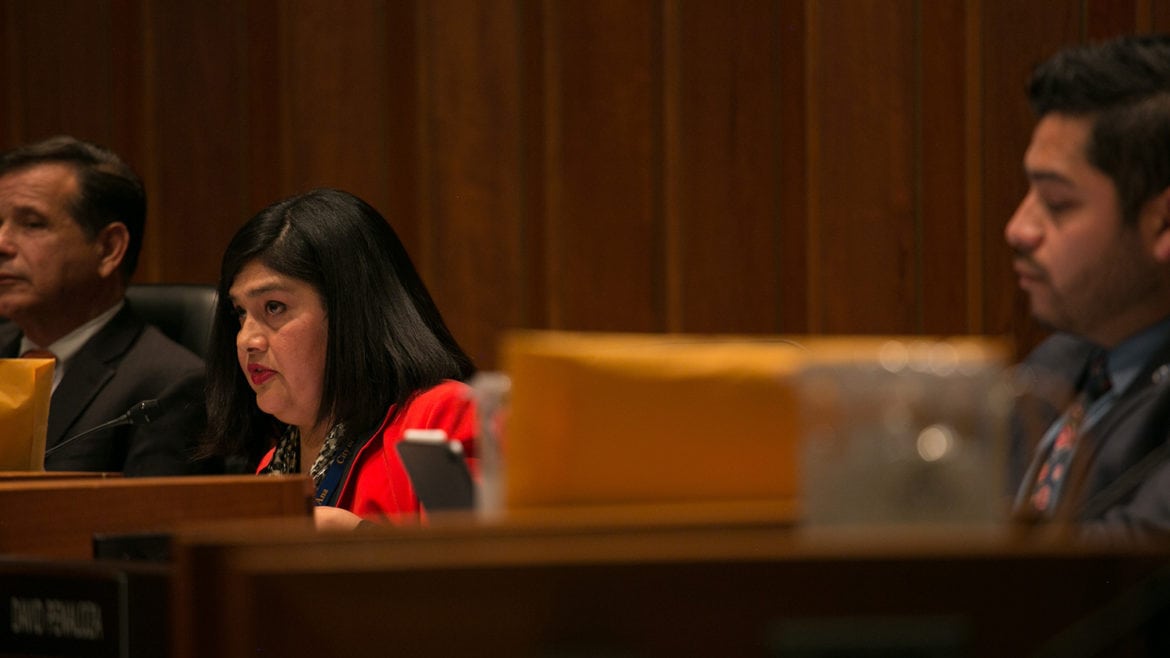 Santa Ana City Councilwoman Ceci Iglesias has been a vocal critic of the city's police union on issues like salaries for police officers.

In 27 days, Santa Ana voters in a special recall election could opt to keep Councilwoman Ceci Iglesias in office or unseat her in favor of one of the three candidates seeking to replace her.

Iglesias and her challengers have agreed to talk about the recall and advocate for their election today at 6:00 p.m., through a virtual forum hosted by Santa Ana non-profit organization Connect-to-Council.

Iglesias has also agreed to a debate with resident and local historian Tim Rush, who will argue in favor of her recall. The debate will be moderated by Voice of OC Publisher and Editor in Chief, Norberto Santana, Jr.

Iglesias’ all-women challenger line-up consists of Nelida Mendoza, a Rancho Santiago Community College District board member who previously ran in 2018 on a slate backed by former councilman and mayoral candidate Sal Tinajero; Thai Viet Phan, an attorney and city planning commissioner who was appointed by Councilman Phil Bacerra; and Angie Cano, a planning commissioner who’s close with Iglesias and has advocated against the recall despite her becoming a candidate.

“To have a democracy, it doesn’t only take a responsible government — it takes an aware voter constituency,” said Dylan Thompson, spokesperson for Connect-to-Council on Wednesday before the forum. “This debate is seeking to provide that information.”

The recall election, set for May 19, was put on the ballot through a signature-gathering campaign financed mainly by the city’s police union.

The police union’s president, Gerry Serrano, has openly clashed with Iglesias as she took a series of positions against what the union wanted. Among the most high-profile was her vote last February against $25 million in raises for police officers that did not have an approved funding source.

Thompson said his group reached out to Serrano and the police union to participate in the debate on the pro-recall position, but the union declined the invitation.

Serrano has previously denied claims that his union’s backing of the recall was because of Iglesias’ opposition to the pay raises.

“We wanted to make this forum a level playing field,” Thompson said, adding that Rush “luckily” stepped up.

Iglesias and Cano are criticizing the police union and the recall process as part of their campaigns, while Mendoza is criticizing Iglesias over her “long history of attacking labor organizations” and defends the recall’s legitimacy, calling it a “democratic” process. Phan has focused her campaign message on rezoning areas to add housing and make it more affordable for Santa Ana’s immigrant communities.

Last year, the police union also put money into a recall effort against Councilman Juan Villegas – who was the other vote against the raises – but the union apparently later backed off funding the recall against him. Together, the union’s support for both recall efforts cost more than $300,000, according to public disclosures.

Police union officials, through multiple letters, have attributed their support of the recall  to what they describe as Iglesias’ failure to properly support public safety.

“She opposed revenue initiatives supporting after-school programs, homelessness and public safety,” Serrano wrote, among other reasons he cited, in an op-ed published by Voice of OC last month.

In previous interviews with Voice of OC, Iglesias called the recall effort a “power grab.”

“The union wants to make an example of me, saying, ‘This is what happens when you dare cross me,’” she said back in March.

The recall election will cost the city a total $710,000, according to Santa Ana city staff.

Voters were able to cast their ballots by mail starting April 20.