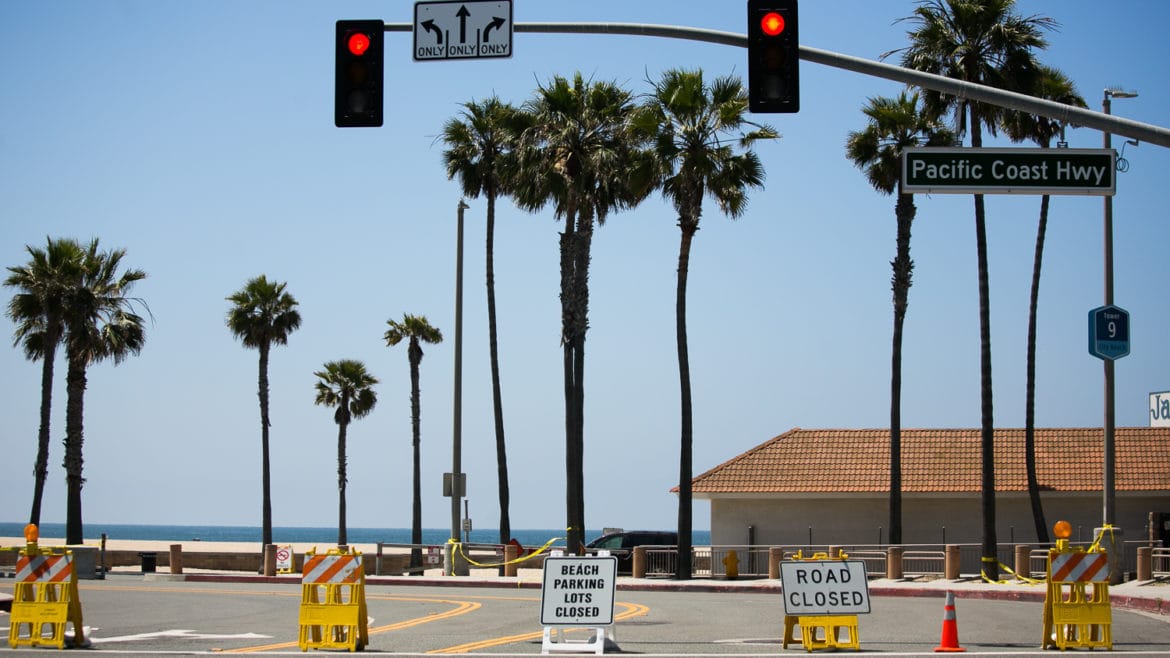 A closed entrance to the Huntington Beach State Park on May 1, 2020.

Newport Beach became the latest city Tuesday to get state authorization to reopen its coastal access to the public, after warm weather crowds there and in Huntington Beach prompted Governor Gavin Newsom to order all Orange County beaches closed late last week as the local coronavirus crisis drags on.

Before Newport, the cities of Laguna Beach, Seal Beach, San Clemente, Dana Point, and Huntington Beach were allowed to reopen this week, but only after the beach cities got their drafted reopening plans approved by the state.

Those cities have largely reopened on the conditions that the public will access the coast for active recreational use only, like exercise and hiking. Stationary or leisurely activity, by comparison, won’t be allowed — meaning people can’t sunbathe or drop umbrellas and towels on the sand.

The county Board of Supervisors is currently trying to get Newsom’s OK to reopen all of them, and on Tuesday directed staff to draft a plan for reopening guidelines that would be uniform on all beaches in the county, and will be sent to Sacramento for authorization.

Newsom in Wednesday remarks to reporters praised the supervisors’ move, saying the board “made a lot of progress” and that the state is “working on some final points” on the proposed guidelines.

But the county’s directions didn’t come without a heated debate among supervisors. Whereas supervisors Andrew Do and Lisa Bartlett expressed interest in going to the governor to reopen their beaches as quickly as possible, supervisors Don Wagner and board chair Michelle Steel warned against submitting to the state, arguing instead the county should be challenging Newsom.

Wagner said that directing county staff to draft a plan that would attempt to be uniform to the guidelines of the beach cities’ plans, which had already been approved by the state, was “an absolute mess and no way to do policy.”

He and Steel were the lone “No” votes on sending the reopening plans to the state.

Supervisor Doug Chaffee said he had trouble with “the concept of fighting this further.”

“We need to work with the governor on a lot of things,” Chaffee said. “I don’t want to fight, I want to work together. Because there are all these other things at stake here.”

Much of Wagner’s and Steel’s frustration stemmed from the political showdown between Newsom and the county, over what county and city officials described as a singling out of the county for beach closures.

Eventually, lawsuits against the state emerged from Huntington Beach and leaders of the California Republican Party. Though in Huntington Beach, that lawsuit appears to be in limbo, as City Council members Wednesday were supposed to meet in closed session to discuss the litigation.

On the heels of the city getting state approval to reopen the city’s coastal access, that meeting has been cancelled.

Newsom’s closures came after warm weather drew tens of thousands of people to Newport Beach and Huntington Beach, raising concerns of inadequate social distancing and subsequent fears of an increased risk of transmitting the novel coronavirus.

“The next time [Newsom’s] whims want to single out Orange County, ‘Sorry, we’ll just follow and do what you want.’ That isn’t American,” Wagner said at the Tuesday supervisors meeting. “No other county is required to do what this governor, in his arbitrary and capricious exercise of power has asked us to submit to.”