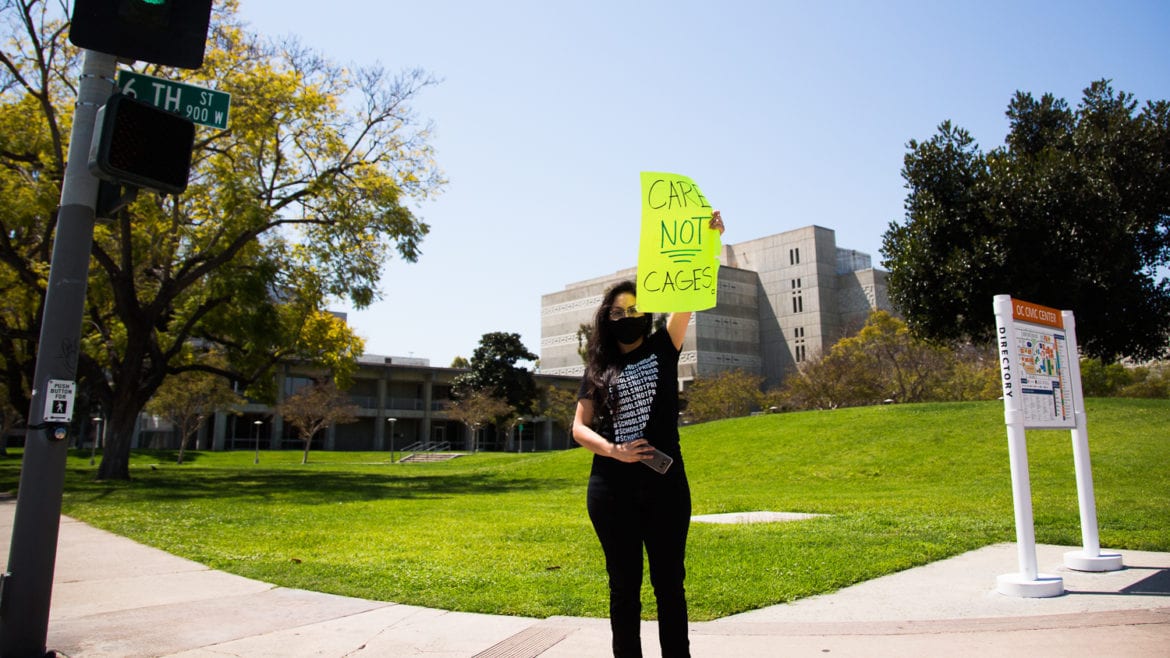 Daisy Ramirez, 30, OC Jails Conditions and Policy coordinator at the ACLU of Southern California, protests in front of the OC Jail on April 14, 2020. Recent Coronavirus infections in the jails have led community members to organize and demand for inmates to be released.

A federal judge is mandating soap, hand sanitizer and six-foot physical distancing for Orange County inmates during the coronavirus pandemic, following a lawsuit filed against the Sheriff’s Department by the American Civil Liberties Union.

“We are concerned especially since one of the main things the judge expressly noted in his order was the gap between what the Sheriff’s said their official policies are, versus the realities of what is happening. And the judge noted that the sheriff is saying, through declarations, from his command staff that X and Y policies are in place,” said ACLU jail conditions advocate Jacob Reisberg.

“The risk of harm within the Jail is undeniably high: at least 369 inmates have contracted COVID‐19 and the Jail lacks the ability to contain the infection. Because the virus is contagious, absent some dramatic change in course, the uninfected inmates are likely to contract the disease if they remain in the Jail. And the 488 medically vulnerable inmates are likely to get very sick and possibly die,” reads Bernal’s decision.

“Defendants’ broad and unsupported claim of compliance is belied by the fact that there are 369 confirmed COVID‐19 cases in the Jail—up from only 26 confirmed cases less than a month ago  on April 22,” reads the judge’s order.

The virus has now killed 136 people out of 5,646 confirmed cases, according to the County’s updated numbers. None of the deaths are inmates. There were also 274 people hospitalized, including 101 in intensive care units. Nearly 2,100 people have recovered so far and 109,000 tests have been conducted throughout OC, which is home to nearly 3.2 million people.

Bernal is requiring deputies and jailhouse staff to keep prisoners six feet apart and give inmates hand soap, hand sanitizer, daily showers and cleaning supplies so inmates can clean the areas they live in.

Barnes, in public statements to the Board of Supervisors over the past two months, said deputies have been automatically quarantining new inmates for up to two weeks in order to watch for any signs of the virus. He also said testing of staff and inmates happens immediately when an outbreak is suspected.

He also told Supervisors the jails have stopped taking inmates with certain misdemeanor citations or warrants in an effort to thin out the jail population.

“So for example we have stopped accepting our counties misdemeanor citations or misdemeanor warrants if it’s less than a bench warrant or it’s not a certain crime,” Barnes said last month.

“If you are in another county and somebody stopped an individual with an Orange County warrant, they would issue them a citation to come back to court and appear on that warrant. But they wouldn’t arrest them, take them to their jail, hold them for five days and transfer them to our jail,” Barnes said.

The ACLU also tried to get 500 medically vulnerable inmates released, but Bernal denied that request.

“What we said in our motion to the court was that all of the medically vulnerable and disabled people should be released, unless there was a specific identifiable risk to the community based on that person’s release. So we weren’t just saying to the court we’re asking you to open the jailhouse doors and let everybody go,” Reisberg said.

The judge said it was too risky to release the inmates.

“There are myriad risks of releasing incarcerated individuals without any consideration of crime committed, propensity to violence, or flight risk. Concerns that released inmates would commit crimes is far from “speculative”—many of the individuals in the proposed class have committed or are charged with violent crimes. Moreover, some pre‐trial inmates may pose a flight risk,” reads Bernal’s ruling.

Last month, Barnes said the sheriff’s department has released 403 people early, 137 of whom are medically vulnerable.

The courts, working in conjunction with the sheriff,  district attorney and the public defender, also released 433 people, Barnes said.

Spencer Custodio is a Voice of OC staff reporter. You can reach him at [email protected]. Follow him on Twitter @SpencerCustodio.Digital

Editor Sonya Quick contributed to this story. You can reach her at [email protected] or on Twitter @sonyanews.